Jeans, Jesus, and the Saint John's Bible: Orthodox in the 21st Century

This exhibit presents and examines how Jesus Christ is artistically portrayed in the Saint John's Bible.

Jesus is illustrated in the traditional, Orthodox style.

When looking at this Bible in its entirety, the traditional depictions of Jesus are few and far between. By describing these works as "traditional", I mean to say that they are created in the Orthodox style of the Byzantine empire that we have come to associate with Christian Iconography today. However, these few traditional images found in the Saint John's Bible are powerful in that they depict a relatable Jesus in such a classic way.

For quote information, see "A Note on Citation" on the home tab.

Within the book of Mark, we see the image titled The Sower and the Seed. The Committee on Illumination and Text found a challenge in deciding how they would depict this prominent bit of scripture. How should the Bible depict the son of man as a sower in a field? How could they successfully indicate that this man was no average man, but maintain that this was a humble and relatable God? According to Susan Sink, "the solution was found in the Eastern Church tradition of iconography. This technique was used… in part to honor the common heritage that the churches of the East and West share” (230). By illustrating Jesus in the tradition of iconography with the thin circle around his head and a calm demeanor, the team could then illustrate Christ performing a task as common as sowing seeds in a field.

Susan Sink furthers this idea by reminding us that there is more than meets the eye concerning The Sower and The Seed. “We are looking, therefore, at a sacred, symbolic action, not just a farming scene. On the other hand, the artist has clothed this Christ in ordinary Western work clothed, jeans, and a sweatshirt...” (232). Perhaps it has never been the visual language of Jesus that makes him so sacred to Christians around the world, but the essence. Even in his time, Jesus did not wear gold or fine clothes to indicate his status. Even being the most perfect person on earth, he dressed as commonly as a man wearing jeans today.

Both illustrations, Woman Taken in Adultery and Two Cures, show Jesus actively ministering and healing others (258). The second image, Two Cures, shows a famous story of Jesus on the streets with his disciples. Susan Sink eloquently states that “Iconography is employed again in the story of the healing of the woman with the hemorrhages and the daughter of the leader at the synagogue… Observe Jesus’ hands in the illustrations. In the first he makes a sign of blessing, in the second he holds up his cloak, from which power has gone out, and in the third he grasps the wrist of the girl, while again making the sign of blessing” (233). Perhaps it is the use of a traditional iconographic art style that reminds us of his divinity as he performs the duties of a common servant. Jesus calls us to have a servant's heart, love our neighbor, and reserve all judgment, and he certainly practiced what he taught.

Finally, Life in Community is simply a beautiful illustration of Jesus, two angels, and a notable congregation. The one-dimensionality harks back to a time of religious devoutness throughout society, and that is in and of itself is inspiring. 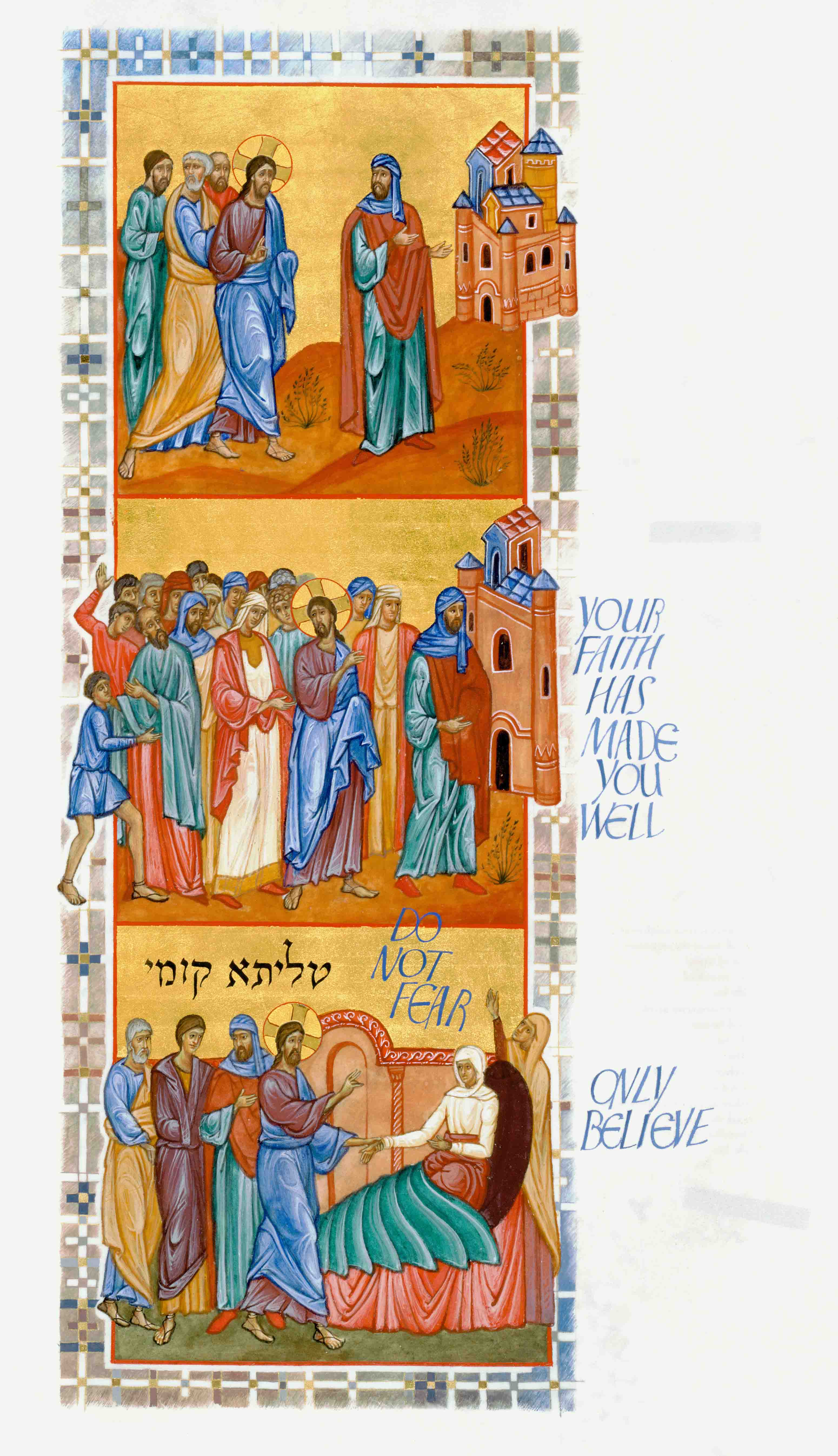 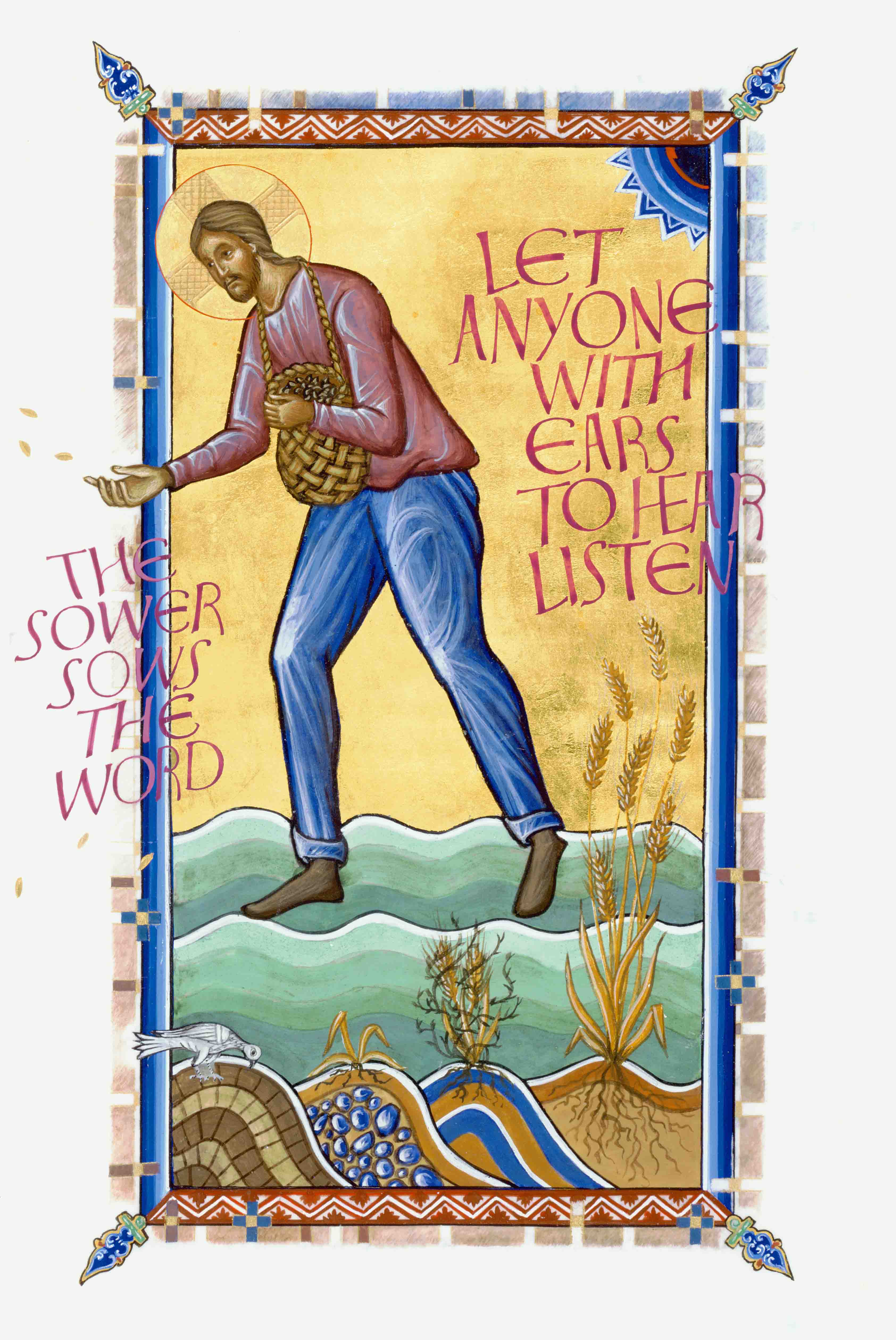 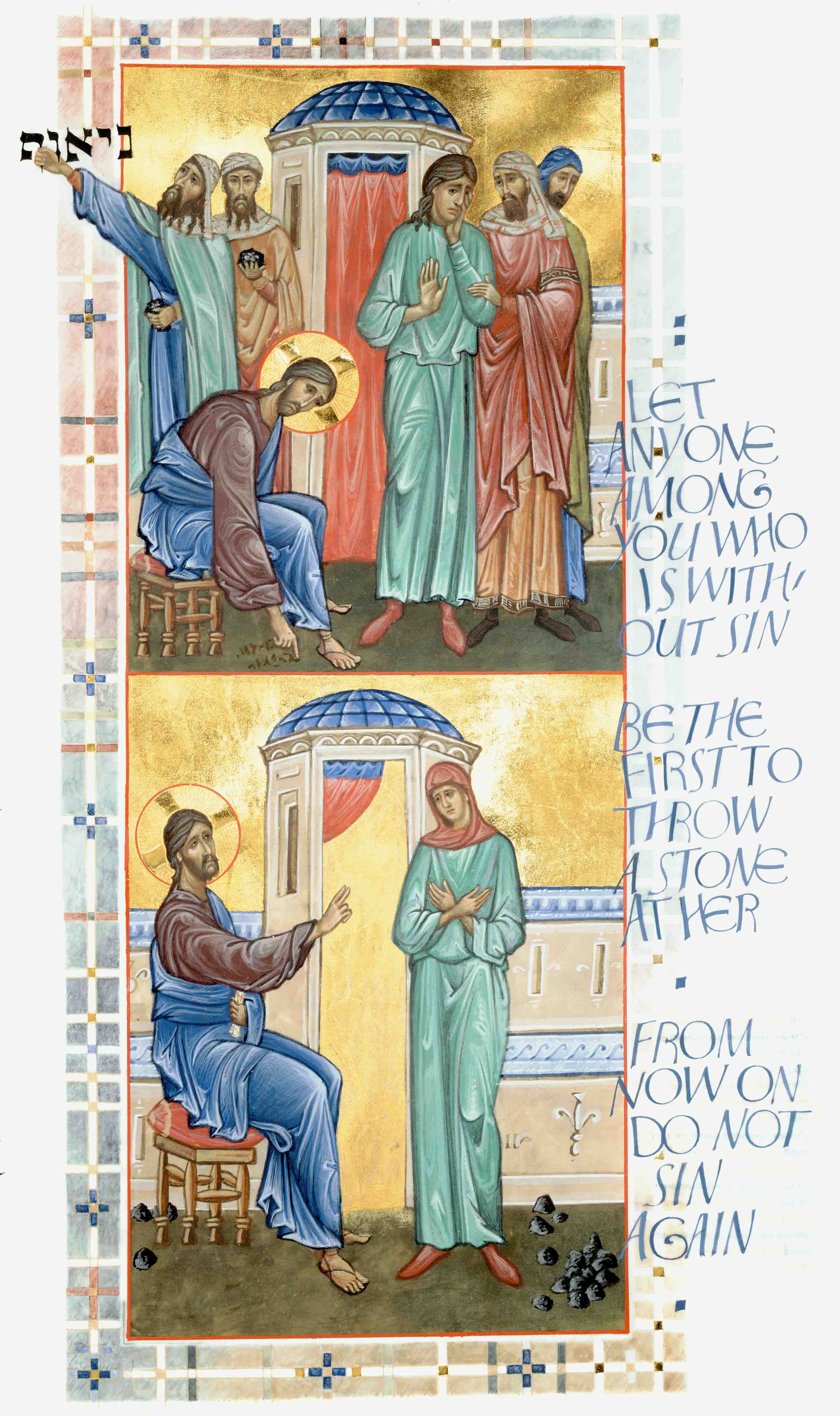 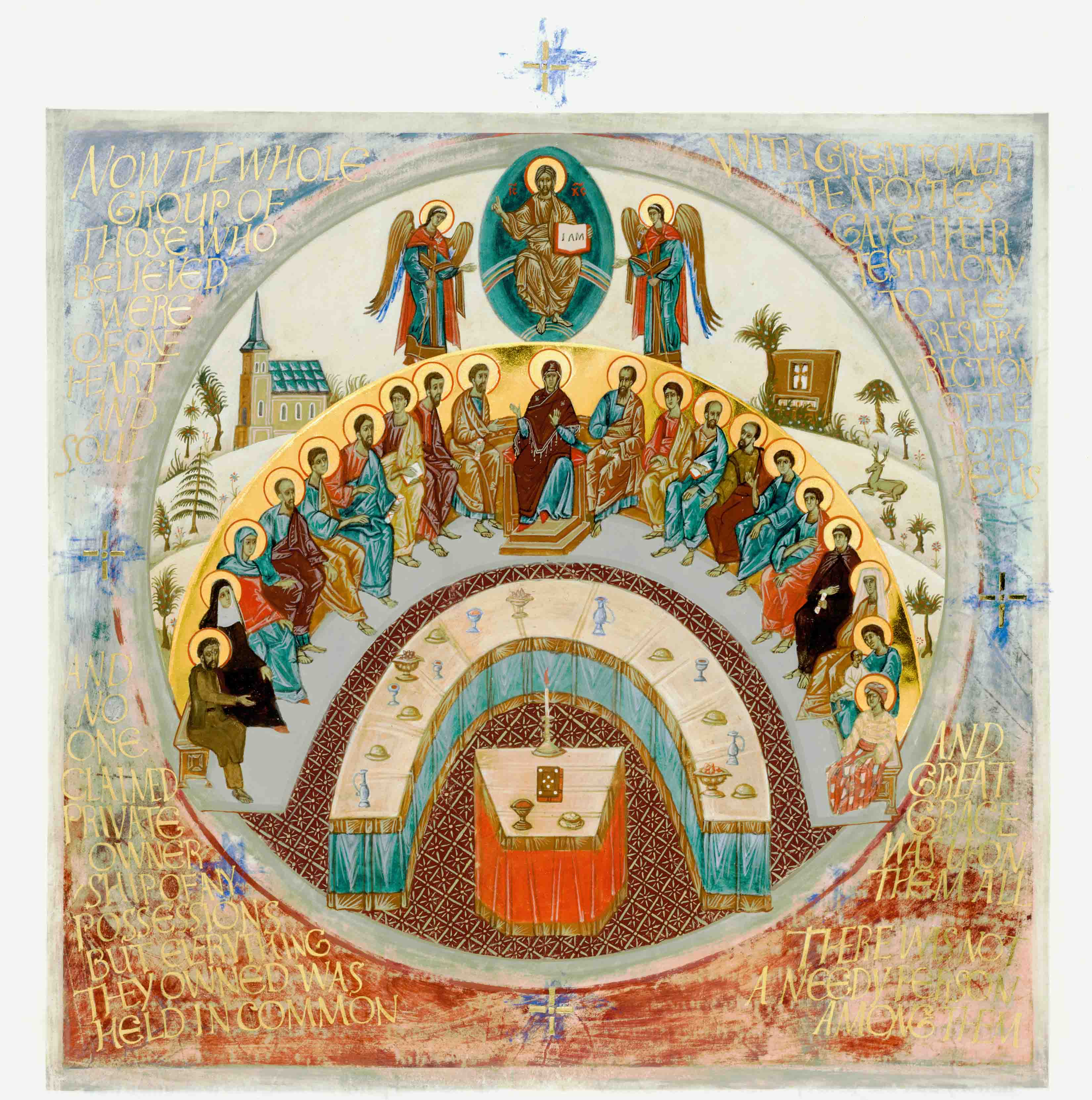