Chris Birmingham, class of 2015, has devoted his time to developing robotics to help the disabled and the elderly. This year he was awarded a Marshal Scholarship to study robotics at the University of Bristol in the United Kingdom. During his time at Gonzaga, Chris has helped develop this robotic arm through the Gonzaga Chapter of the Institute of Electrical and Electronic Engineers (IEEE). UASC is grateful for the temporary loan of the arm for this exhibit.

Chris Birmingham and the robotic hand, 2015 (photo by Rajah Bose) 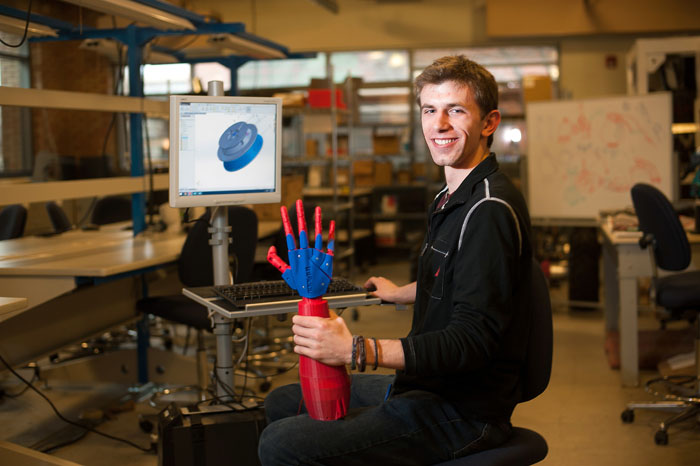 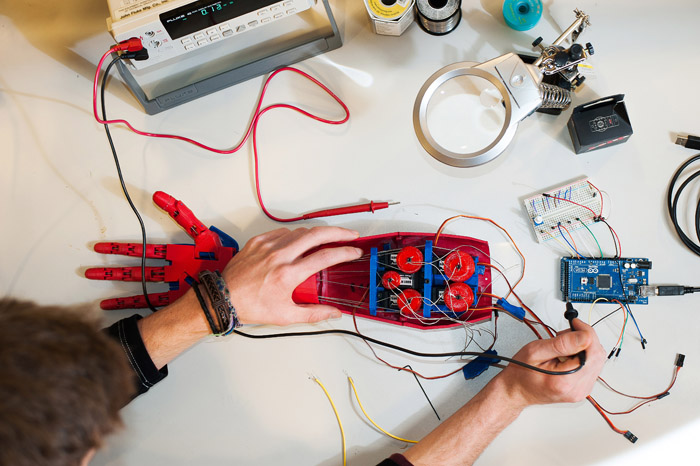 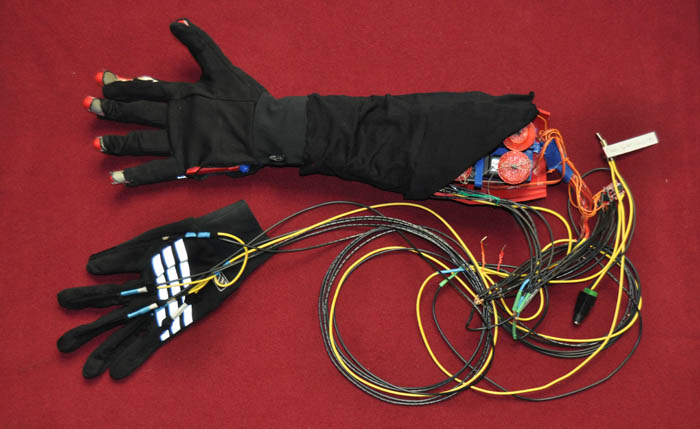 SPOKANE, Washington – Christopher Birmingham, a Gonzaga University senior from Tacoma, Washington, who has focused his studies on developing robots to help the disabled and the elderly, has won a Marshall Scholarship, a prestigious and extraordinarily competitive award that enables future leaders to undertake advanced graduate study at universities in the United Kingdom.

Marshall Scholarships finance up to 40 intellectually distinguished young Americans each year. The British Foreign and Commonwealth Office funds the Marshall Scholarships to thank America for sponsoring the post-World War II European Recovery Program (the “Marshall Plan,” named for the late Gen. George C. Marshall, former U.S. Secretary of State). The scholarship pays scholars’ university fees and living expenses for two years (with the possibility of a third year), plus travel to and from the United States. Birmingham will study robotics at the University of Bristol in Bristol, England. He aims to pursue a master’s degree, followed by a doctorate in robotics.

“I join with the entire Gonzaga University community in congratulating Chris Birmingham on his exceptional achievement,” said Gonzaga President Thayne McCulloh. “He is an incredibly accomplished student and we are very proud of the many opportunities he has both taken advantage of, and created, while at Gonzaga. Marshall Scholars have gone on to do important work in the world, and we are excited about where his journeys will take him.”

In last year’s (2014) competition, 946 seniors were endorsed by their universities or colleges for the Marshall Scholarship, 146 were named finalists, and 34 were selected as Marshall Scholars. Marshall Scholarship alumni include such luminaries as Graham Allison, foreign policy expert and founding dean of Harvard University’s Kennedy School of Government; Anne Applebaum, Pulitzer Prize-winning author/journalist and columnist for the Washington Post; Bruce Babbitt, former governor of Arizona and U.S. Secretary of the Interior; U.S. Supreme Court Justice Stephen Breyer; and Thomas Friedman, multiple Pulitzer Prize-winning author/journalist and columnist for The New York Times and a speaker for the Gonzaga Presidential Speaker Series.

“I am frankly amazed that I won. I am incredibly grateful for the Marshall Scholarship. I could not have done this without the support of all those who helped me along the way and without my rich and diverse education at Gonzaga. This opportunity is amazing and is exactly what I want to do,” said Birmingham, a member of the Gonzaga Honors Program who is majoring in electrical engineering with a minor in computer science in the School of Engineering and Applied Science.

A graduate of Bellarmine Preparatory School, Birmingham said he has always wanted to use robots to help people – ever since he began building robots in the third grade. An award from the National Science Foundation’s Research Experiences for Undergraduates last summer allowed him to work in the Healthcare Robotics Lab at the Georgia Institute of Technology with Professor Charlie Kemp, who conducts research and teaches at the biomedical engineering department at Georgia Tech and Emory University.

Birmingham has demonstrated his versatility as a student by maintaining a 3.9 grade-point average in the Gonzaga Honors Program, which emphasizes advanced study in the humanities and social sciences, and his major fields of study in engineering and computer science. As a sophomore, Birmingham participated in Gonzaga’s flagship study abroad program in Florence, Italy, an experience that enabled him to travel widely throughout Europe and whetted his appetite for further international study.

Birmingham has served since the fall of 2013 as vice chair for the Gonzaga chapter of the Institute of Electrical and Electronics Engineers (IEEE). Also since fall 2013, he has served as the founder and president of the Robotics Club (through the School of Engineering and Applied Science) that has five active projects, including an effort to build a robot to help a wheelchair bound person bowl.