Click here for more information about the Bruno Psalter of 1475 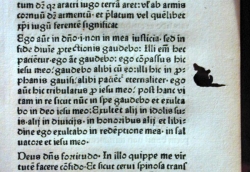 Literal bookworms do exist and have for centuries: here is evidence of one, in the margin.
Early printed books imitated the abbreviations used in manuscripts. The text shown beside the worm hole is "Ego autem in domino et non in mea iusticia, sed in fide divine protectionis gaudebo." In several places, abbreviations have been used, including a "suspension mark" above a word, to mark the omission of one or more letters, usually an m or n. An example is the word autem which appears simply as aut with a suspension mark. Names for God and the saints, nomina sacra, are frequently abbreviated. The standard abbreviation for dominus (Lord) is dn plus the final letter of the word, to indicate its grammatical case.