Undefeated since 1941: A History of Gonzaga Football: Lobby Case 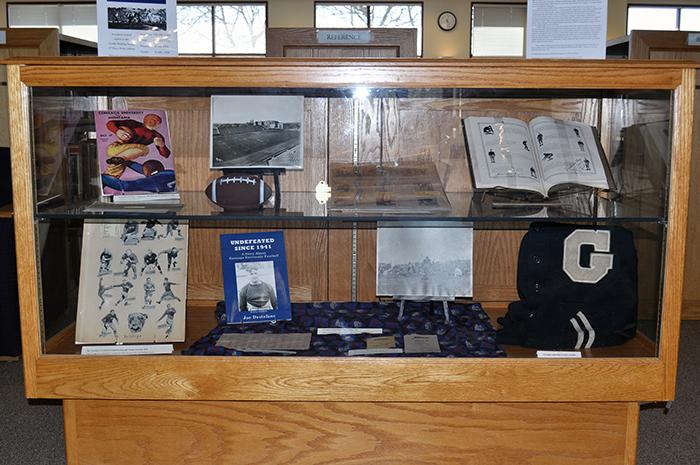 Gonzaga’s football journey began on Thanksgiving Day, 1892 with a tie game (4-4) against the Spokane Amateur Athletic Club and ended on November 22, 1941 with its historically worst loss to Washington State College (59-0). Those 49 years saw a seven-year intercollegiate ban on the sport, changes to how the game was played, and a football generated contribution to the rise of Gonzaga’s profile on the national level. While young boys were attending Gonzaga in its early years, they were able to play football and other sports through an intramural league called Junior Yard Association or JYA. Coach Gus Dorais led the Gonzaga football program through its golden age in the early 1920’s, and Gonzaga became a ranked team. Little Gonzaga played large schools such as the University of Oregon, Washington State University, and the University of Nevada throughout the 1920’s and 30’s. However, once World War II began, Gonzaga football lost its funding and its players.

After the war, students wrote petitions to bring football back to Gonzaga and the administration deliberated carefully over these appeals. Suggestions were made to continue the program, such as reducing the number of players and having alumni underwrite athletic scholarships. But, these ideas were not enough. The facts were that after continued losses and no promise of better results, football was harming Gonzaga’s self-respect. Furthermore, Gonzaga administration did not want to lower the school’s academic standards just so students could play football. There was concern that professors might give better grades to football players than deserved. If the players failed a class, they would be dropped from the team, and that would reflect poorly on the professor.

Finally, there was no way to pay the football program deficit that had built up over the years while simultaneously funding the program given the impending stadium repairs needed. Gonzaga refused to allow program funding using outside money because it would have meant potential external influence over administrative policies. Additionally, recent poor crowd attendance indicated a lack of civic interest. In the end, the substantial past losses and the unbearable future losses were too much to handle. The administration shut down football forever and Friday Night Lights became just a memory of the past. Today, both Gonzaga men and women enjoy competing in intramural flag football on campus.

This exhibit emphasizes the most important aspects of Gonzaga football, highlights its most notable alumni, and details why Gonzaga football has been absent from the American sporting scene since 1941.

The materials were drawn from the Gonzaga University Archives. 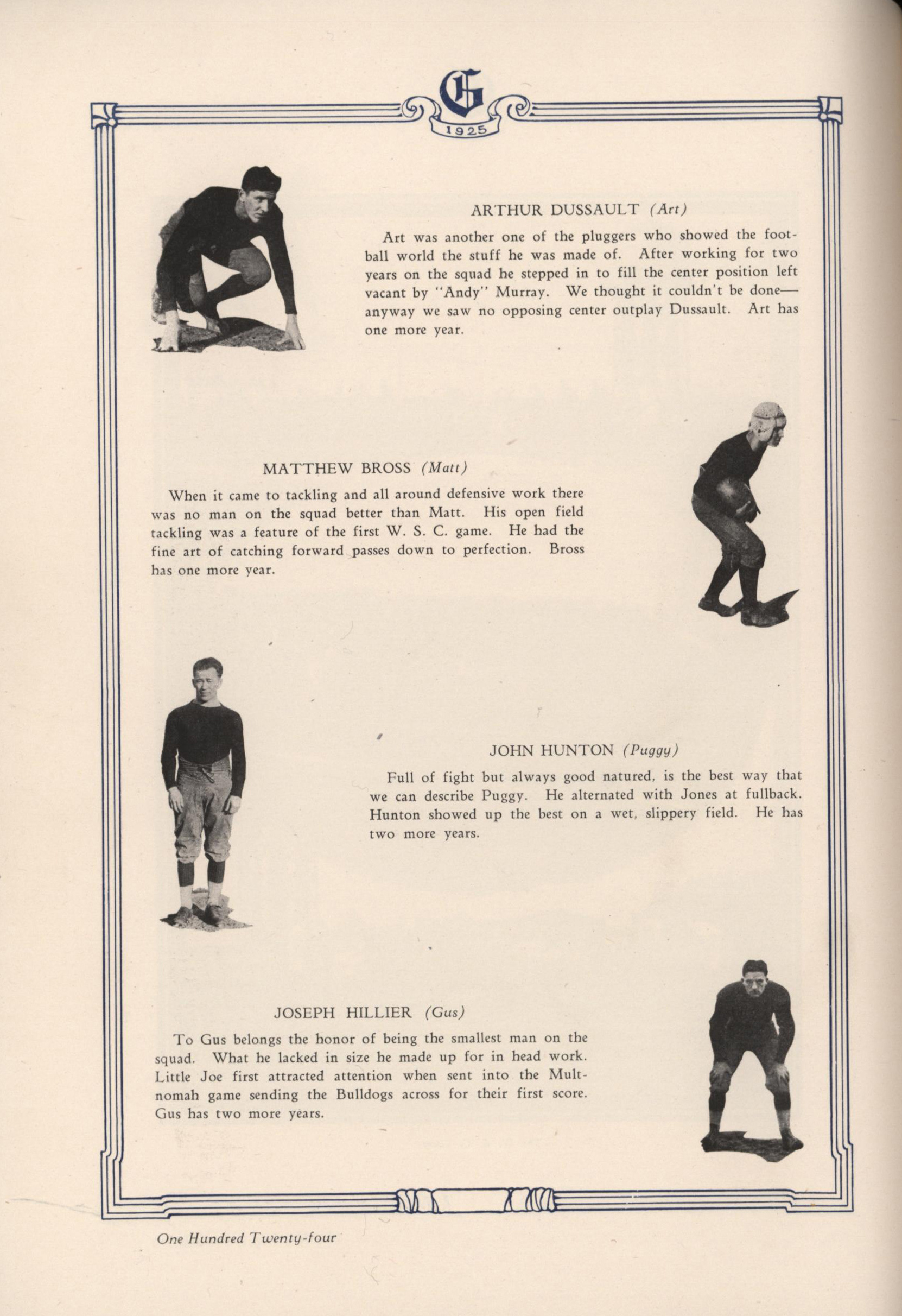 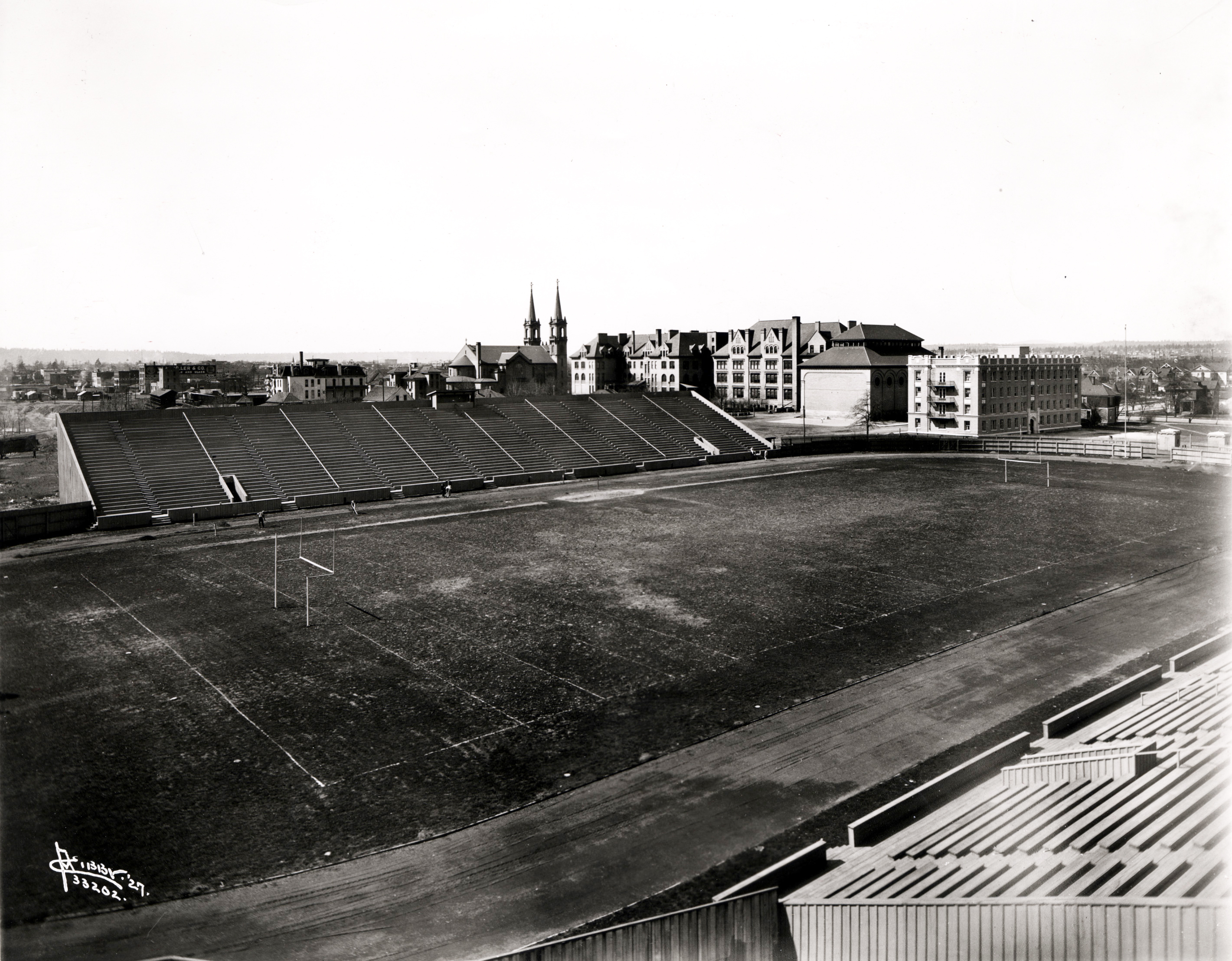 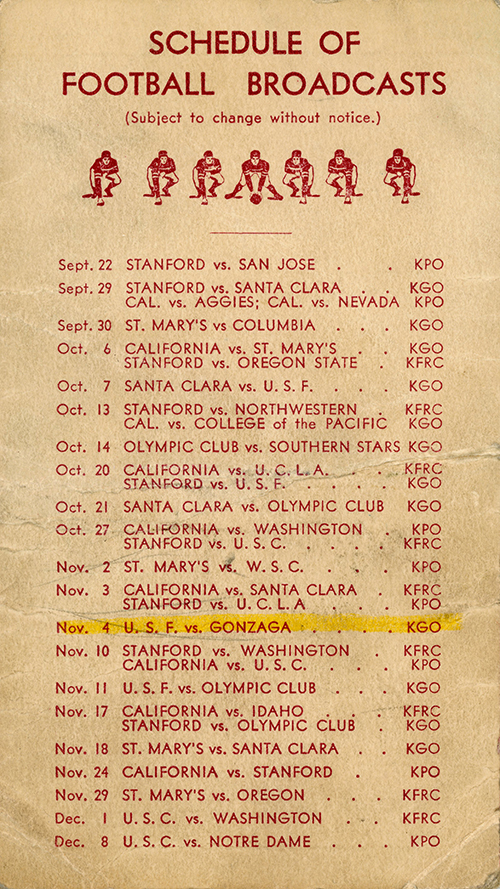 In 1934, the radio channels KPO and KFRC broadcasted Gonzaga’s games against University of San Francisco, University of Oregon and Washington State. 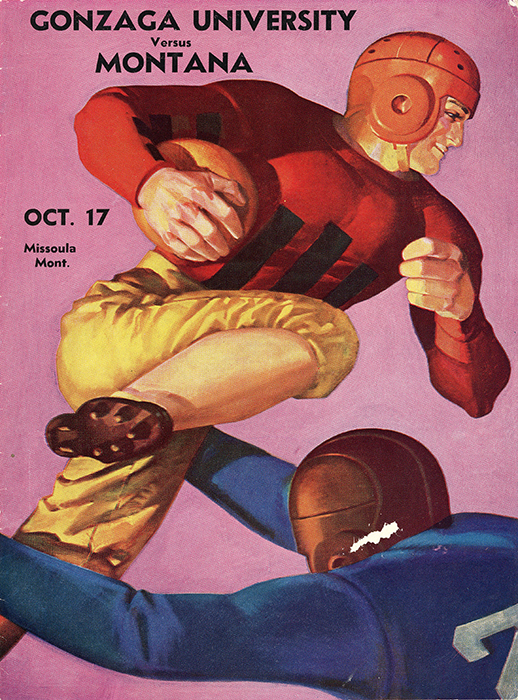 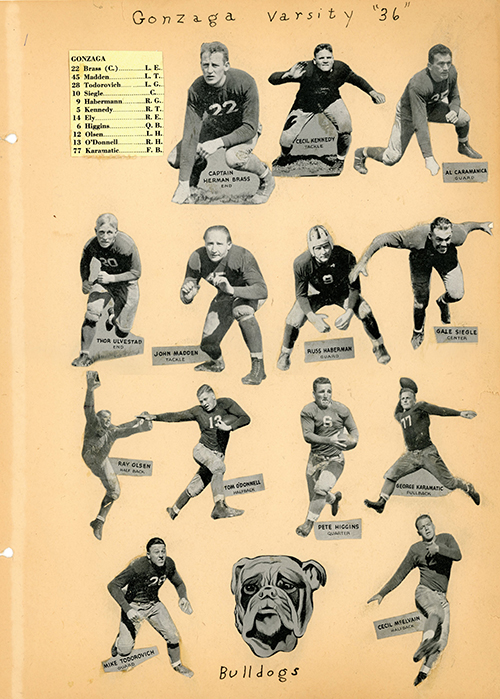 The 3rd page from Jacobson’s scrapbook with cutouts of the 1936 football players. 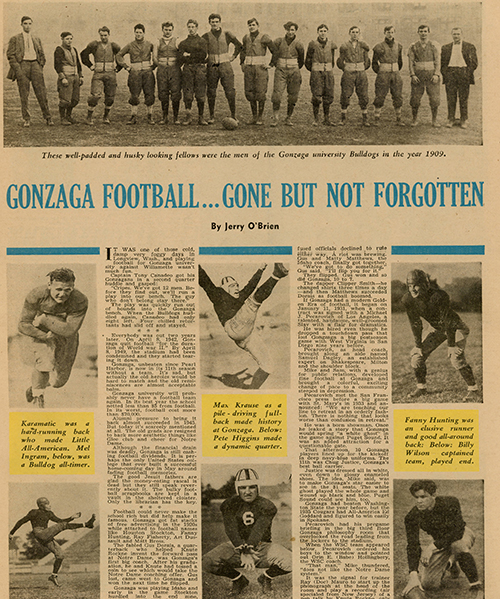 This article written by Jerry O’Brien details the history of Gonzaga football.

The 1909 football team. Note the uniforms and back supporters that cinch at the waist. This apparel looks very different from the gear football players wear today.

Undefeated Since 1941, A Story About Gonzaga University Football By Joe Destefano 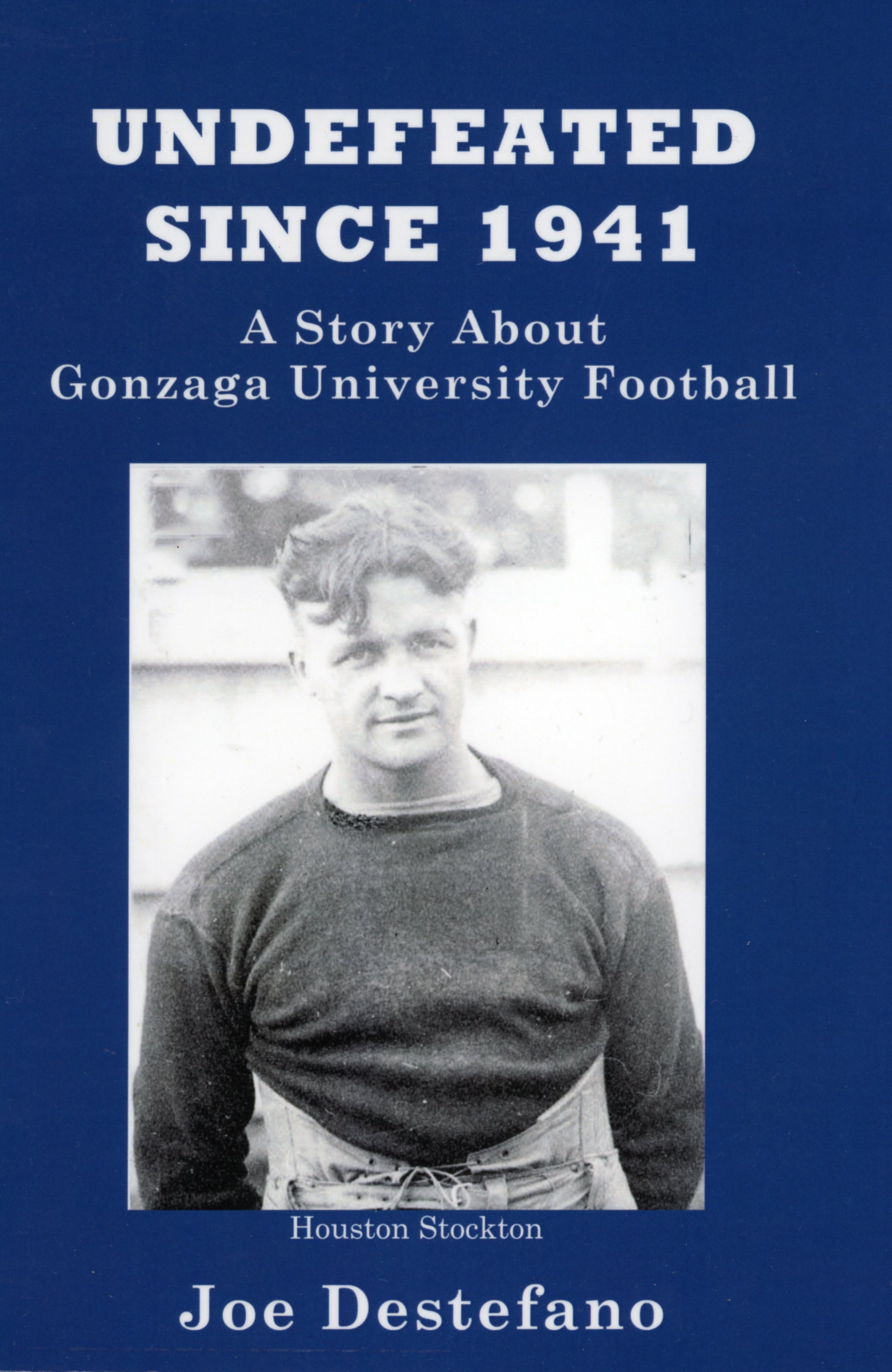 Undefeated Since 1941 is a 157-page book written by Joe Destefano. It is full of facts and photographs that depict the history of Gonzaga football. Photographs and information taken from the Gonzaga University Archives. 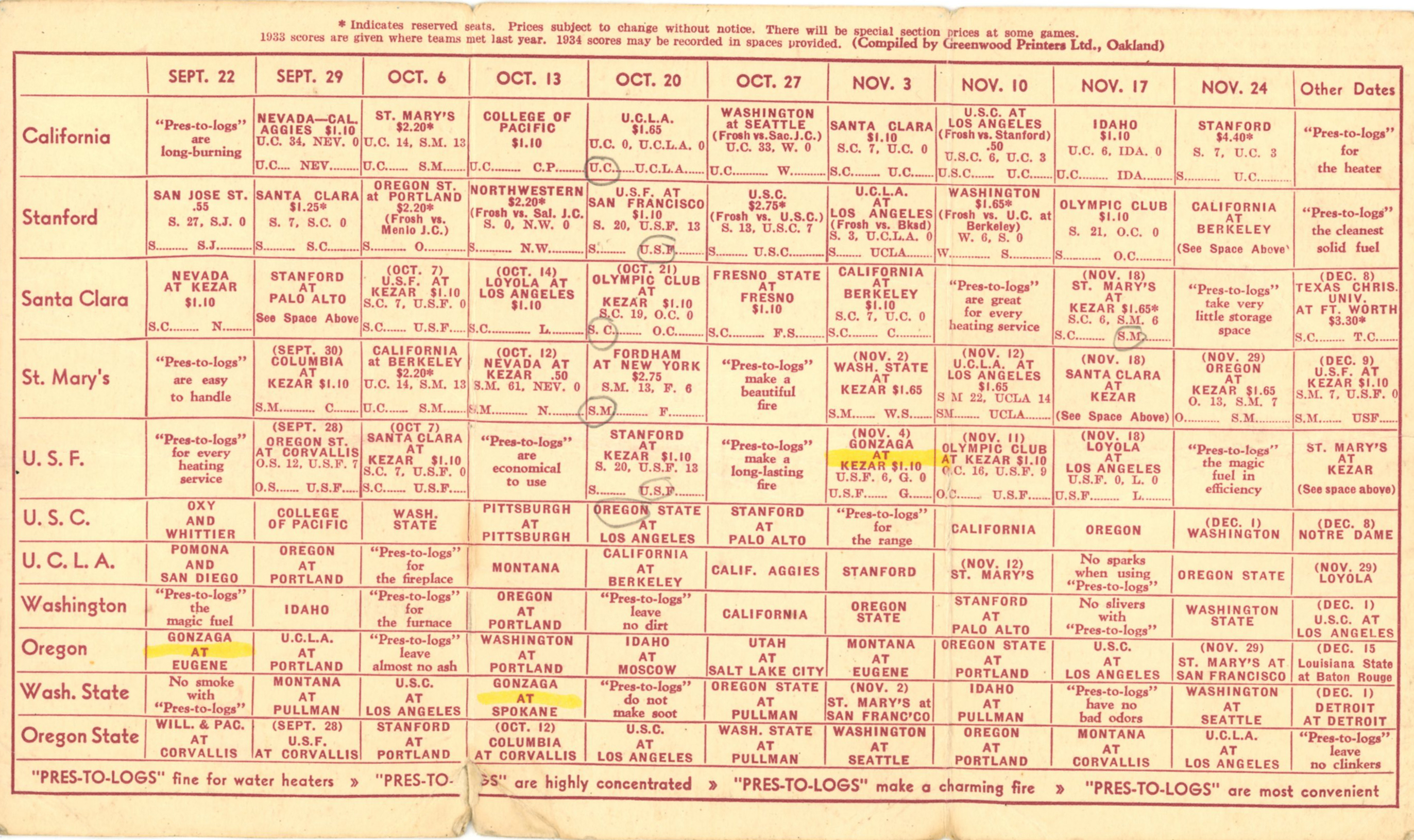