Tradition and Transformation: 125 years with 125 Items 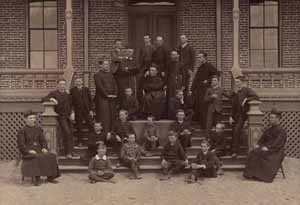 In the fall of 2012, Gonzaga University celebrates its 125th anniversary. Gonzaga officially opened its doors on September 17, 1887 to 8 boys and slightly larger group of Jesuit faculty. Today the is a coed enrollment of over 7,000. The following is an exhibit telling Gonzaga’s story through the use of 125 items.

Not every aspect of Gonzaga’s 125 storied years could be covered in the exhibit space, but the items are representing the variety of people and events. The exhibit is divided into 8 categories/cases: Early History, Football, Athletics, Events, Academics, Student Life, Celebrations and Leaders, and Photographs.

Most items are from the Gonzaga University Archives; a few have been loaned for the exhibition. The physical exhibit will be open weekdays 10:00 – 4:30 starting on September 17, 2012 and ending January 31, 2013. There will be special extended viewing hours for various 125th Anniversary events.

Today, Gonzaga University looks much different than its humble beginnings in 1887. Fr. Cataldo could never have imagined that his school would grow and change so much. Instead of the initial 19 boys attending, Gonzaga now has a coed enrollment over 7,000. Instead of one building on 320 acres, the campus now includes 94 buildings on 131 acres. Instead of 17 Jesuits educating the young boys, today Gonzaga employs over 1,200 people with only 17 Jesuits.

Although it does not resemble the institution of 1887, Gonzaga has never lost its primary purpose. As written in the first catalog, Gonzaga's object is to offer students "the facilities for securing a solid and complete education, based on the principles of religion and calculated to fit them for a successful career in life." For 125 years, Gonzaga University continues to offer a quality Jesuit education to its students.

To find out more about Gonzaga’s rich history go to: http://www.gonzaga.edu/Academics/Libraries/Foley-Library/Departments/Special-Collections/Exhibitions/Past_Exhibits/Gonzaga_History/default.asp