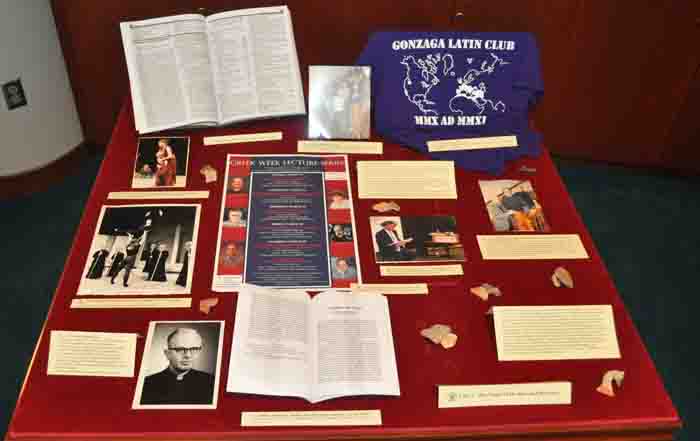 While the Classics Department did not play as dominant a role in Gonzaga’s curriculum during the 1970s, it still existed as a highly recognized discipline in Gonzaga’s broadening educational mission.  Sadly, enrollment in the department began to decline in 1975 with a reduction in course offerings and instructors, and the removal of Graduate Masters and Teaching Degrees in 1977.  Such changes reflected a wider trend in the teaching of Classics across the US at that time, as university departments and high school enrollment in the ancient languages shrank.  The department, which officially changed its name to Classical Civilizations (CLAS) in 2000, has limped on ever since.  However, the popularity of Classical studies has recently begun to increase among Gonzaga’s undergraduates, along with a corresponding increase in instructors, course offerings, and majors/minors.  As part of the CLAS major, undergraduates can now choose a concentration in either Latin or Graeco-Roman Civilizations, in order to pursue their individual interests in the ancient languages, culture, history and archaeology.  The department’s future seems bright as it enters the 21st century, resuming its important role in Gonzaga’s humanistic, Jesuit and Catholic mission. 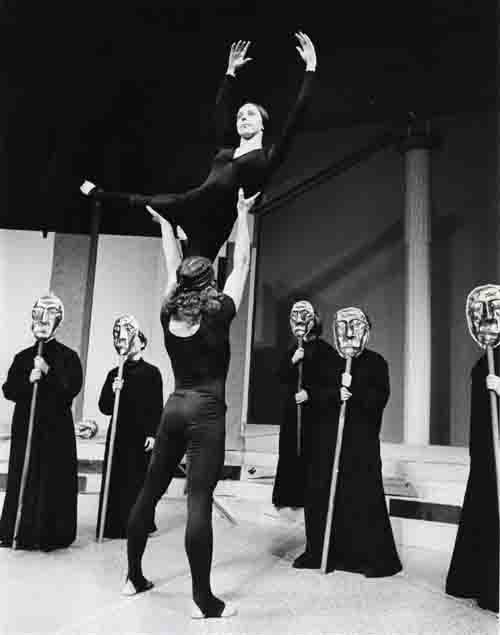 Gonzaga’s production of the Greek classic.  Photograph by Tom Salyer. 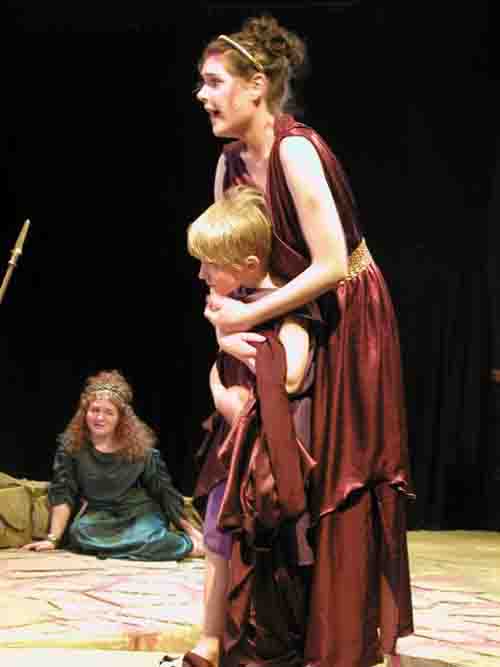 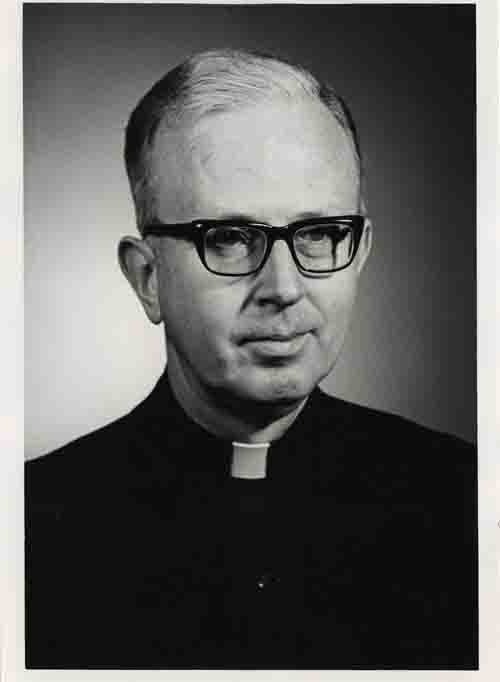 Fr. Schlatter served as an endowed chair of the Classical Civilizations department whose work enabled the department to offer courses in Greek and Latin on higher levels.  In 1998 after many years of valuable service, Fr. Schlatter retired as Emeritus Professor.  Since then, Fr. Schlatter has continued to teach the upper division language classes, special tutorials in which students may continue to draw upon his considerable proficiency in these ancient languages. 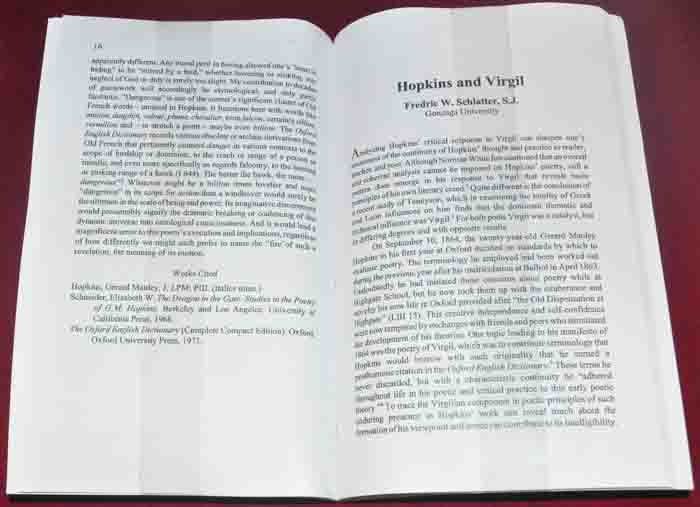 Fr. Schlatter used items (such as Catalog Item #51) from the Hopkins Collection at Gonzaga to write this article. 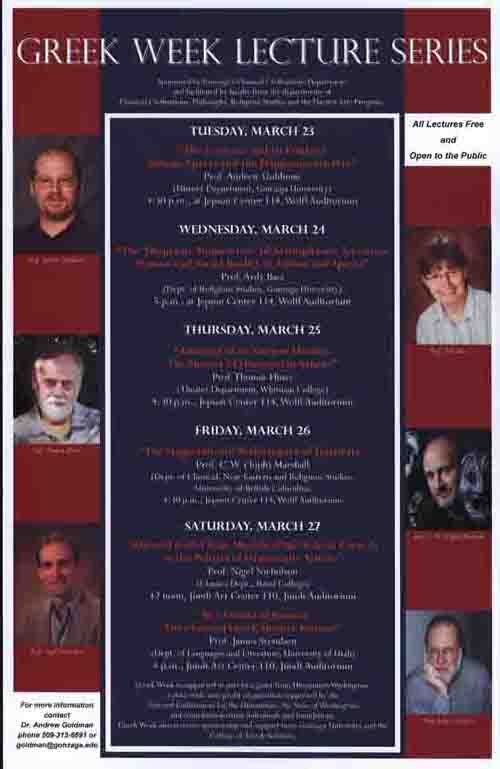 The Ancient World inspired Gonzaga University for an entire week, spreading Greek culture and its influence across the whole campus.  Greek Week was a major hit.  It included a free lecture series from March 23-27 which featured speakers from Gonzaga’s Classical Civilizations Department and other Classics professors from universities across the Northwest.  Greek Week also included activities such as a “Homer-athon,” where Classics students and faculty members performed an uninterrupted reading of The Odyssey in the Crosby Student Center.

Greek theatre played a major role in the formation of Greek Week, which was centered around a performance of Aristophanes’ Lysistrata, a comedy about how the wives of Greek warriors quelled the warlike nature of their husbands by withholding their feminine charms. The play, which took place in the Magnuson Theater, also featured post-production discussions by experts in Greek theatre and culture, including Professors Ardy Bass, Thomas Hines, Nigel Nicholson, James Svendsen, and C.W. Toph Marshall, who is considered one of the world’s leading experts in Greek comedy.

Greek Week was sponsored by Gonzaga’s Theatre Arts Program and the Departments of Classical Civilizations, Philosophy, Religious Studies, and by a grant from Humanities Washington, a statewide non-profit organization.  This week truly encompassed the greatness of Ancient Greece.

Dr. Marc Manganaro, Dean of the College of Arts and Sciences at Gonzaga, participating in the Homer-athon as part of the festivities of “Greek Week”, March 2010 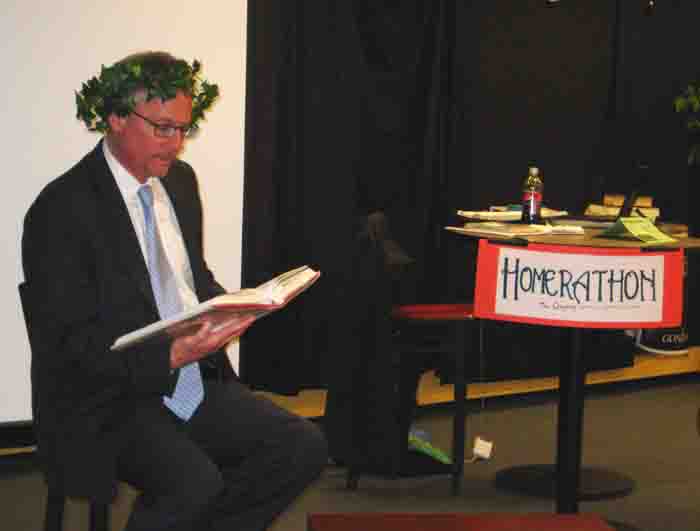 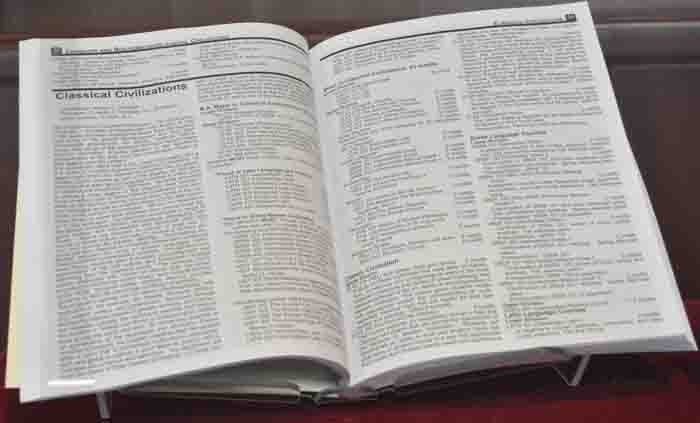 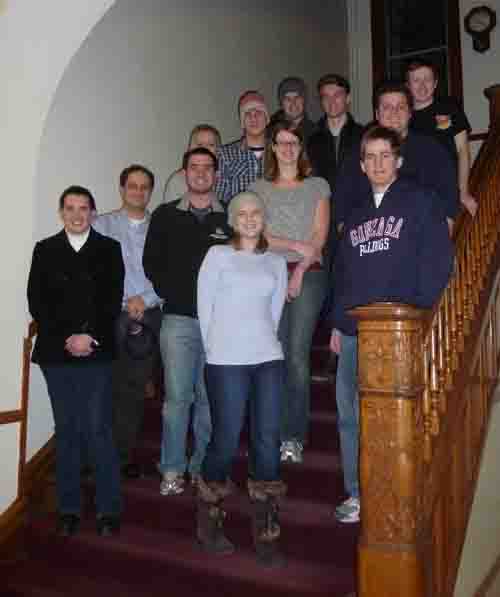 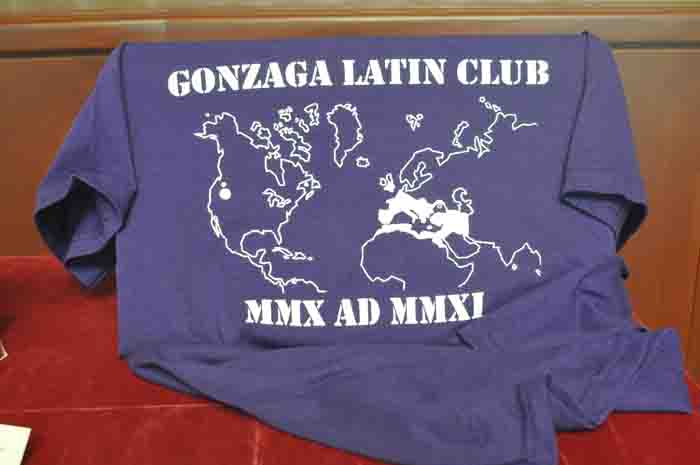 These shirts indicate that the Roman Empire is still alive and well in the hearts of Latin students in Gonzaga University, Spokane. 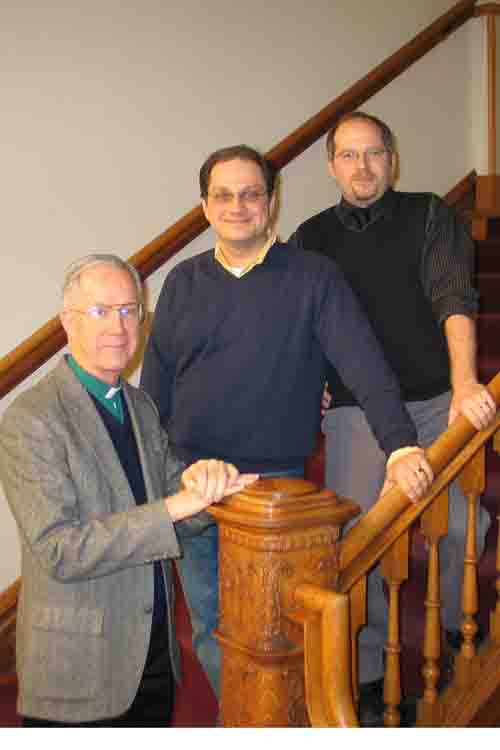 Gonzaga’s current faculty in Classical Civilizations includes Dr. Andrew Goldman, associate professor in the History Department and current chair of the Department of Classical Civilizations; Fr. Ken Krall, S. J., senior lecturer, who instructs introductory and intermediate Latin and Greek and whose efforts have resulted in increasing numbers of students in these courses; and the newest addition, Dr. David Oosterhuis, assistant professor of Classical Civilizations, who instructs Latin, Greek and a variety of Classics topics.  These outstanding professors are the latest in long line of talented teachers who continue to foster a love and passion for Classics in the souls of their students.