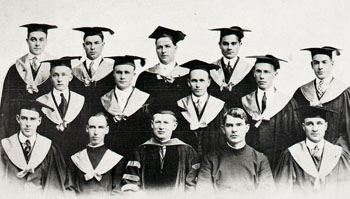 As the Law School celebrates its centennial, this exhibition looks back and reflects on the law school’s rich history. Founded on the motto “A First Class Law School, or None at All” the law school opened its doors on October  1, 1912 with two classrooms set aside on the third floor of the Administration Building (now known as College Hall). A three-year program was offered in the evening, five nights a week with two instructors.  Saturdays were for debates and special assignments.  In those early days law school classes were taught primarily by lawyers and judges who volunteered their evenings after serving long days practicing law.

Most items are from the Gonzaga University Archives; a few have been loaned from the Law School for the exhibition. The physical exhibit will be open weekdays 10:00 – 4:30 starting on March 1, 2013 and ending May15, 2013. There will be special extended viewing hours for various Centennial events.

To find out more about Gonzaga’s law school history go to: http://www.gonzaga.edu/Academics/Libraries/Foley-Library/Departments/Special-Collections/Exhibitions/Past_Exhibits/Gonzaga_History/default.asp