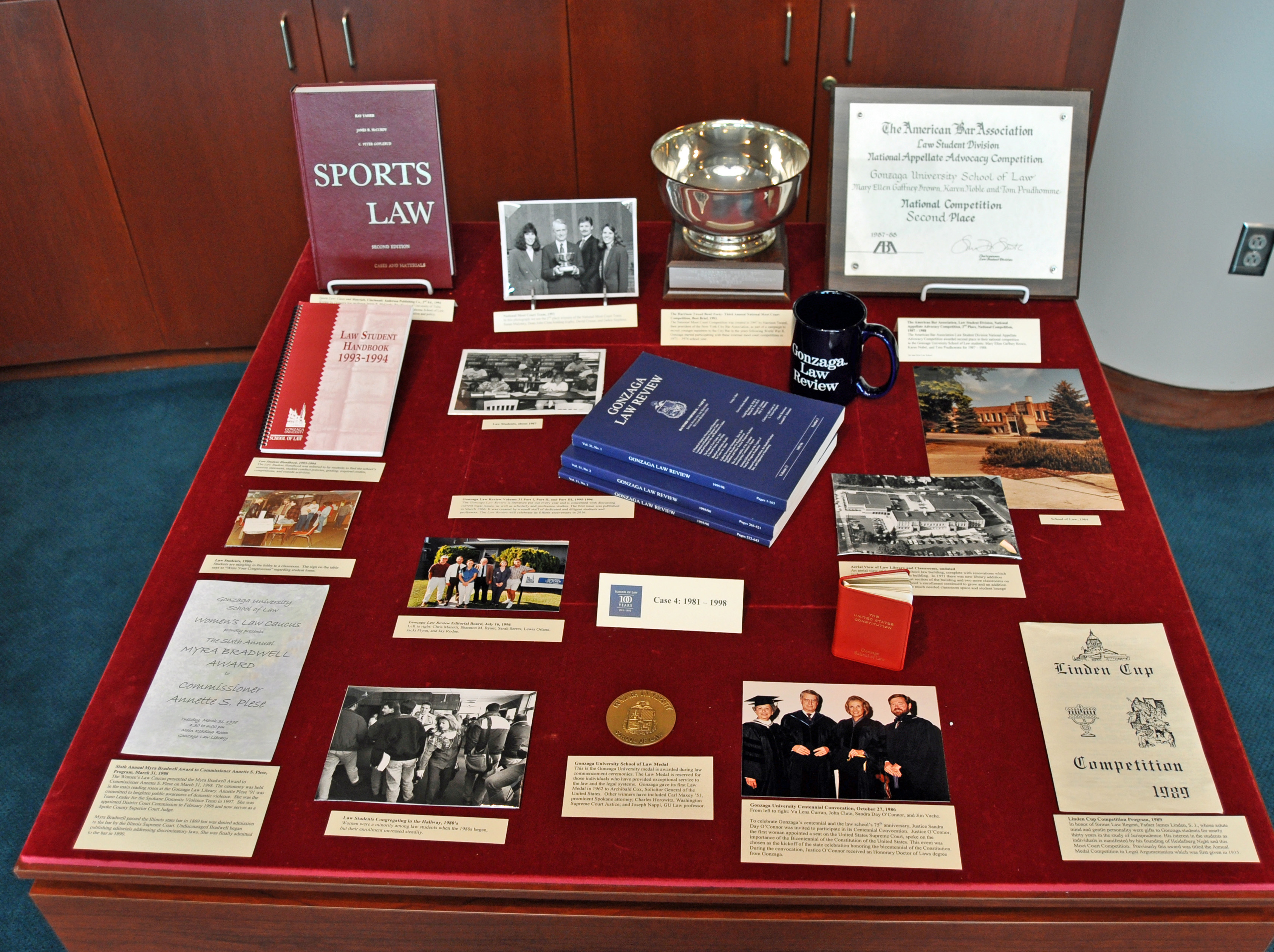 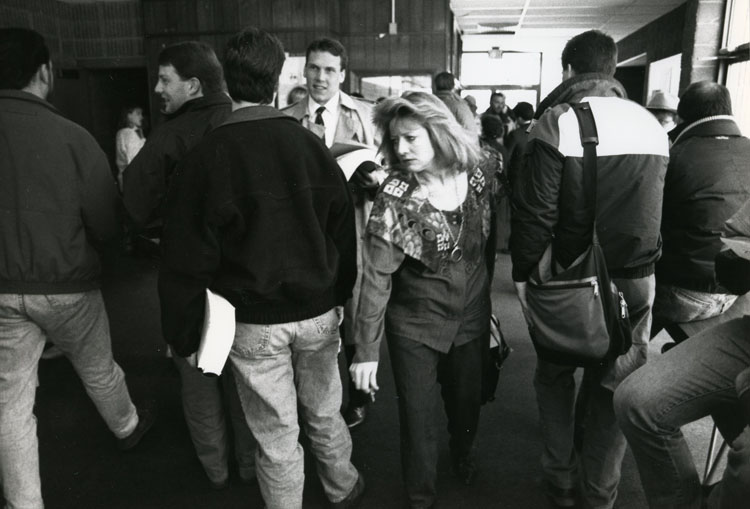 Women were a minority among law students when the 1980s began, but their enrollment increased steadily. 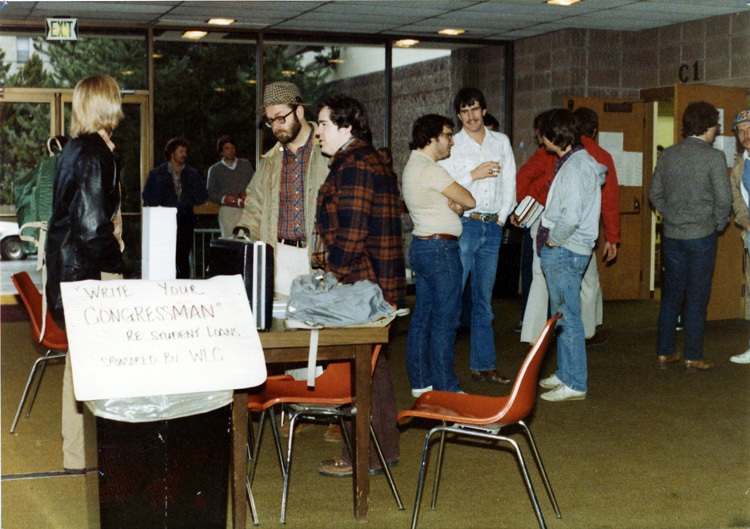 Students are mingling in the lobby to a classroom.  The sign on the table says to “Write Your Congressman” regarding student loans. 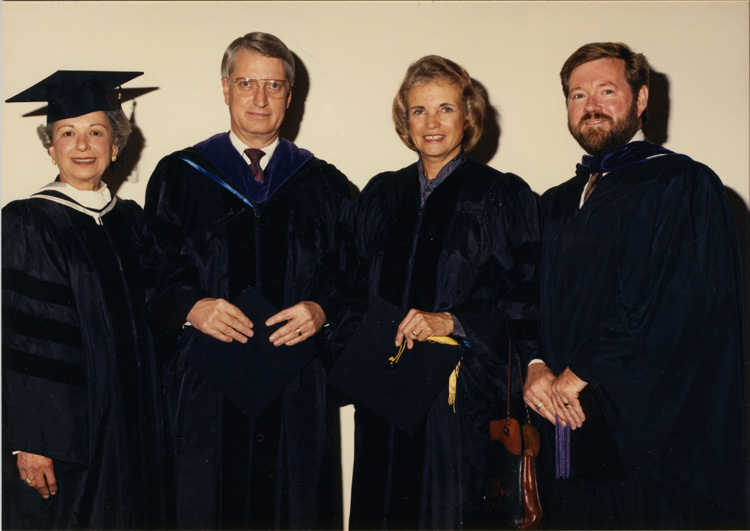 To celebrate Gonzaga’s centennial and the law school’s 75th anniversary, Justice Sandra Day O’Connor was invited to participate in its Centennial Convocation.  Justice O’Connor, the first woman appointed a seat on the United States Supreme Court, spoke on the importance of the Bicentennial of the Constitution of the United States. This event was chosen as the kickoff of the state celebration honoring the bicentennial of the Constitution. During the convocation, Justice O’Connor received an Honorary Doctor of Laws degree from Gonzaga. 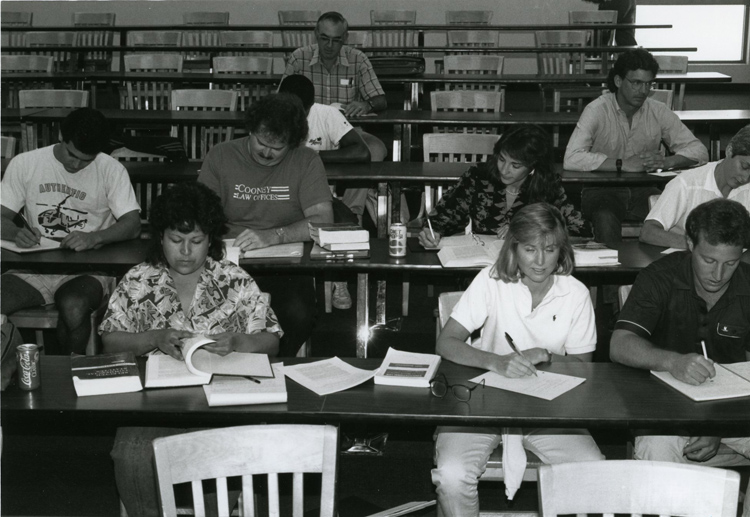 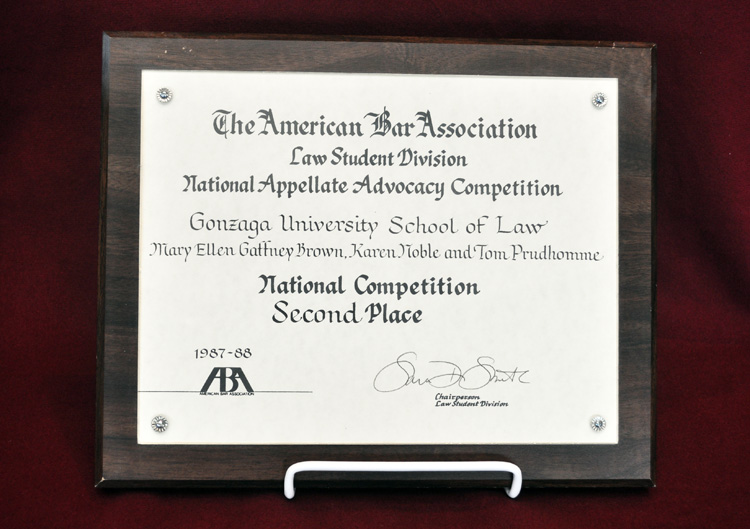 On loan from the Law School 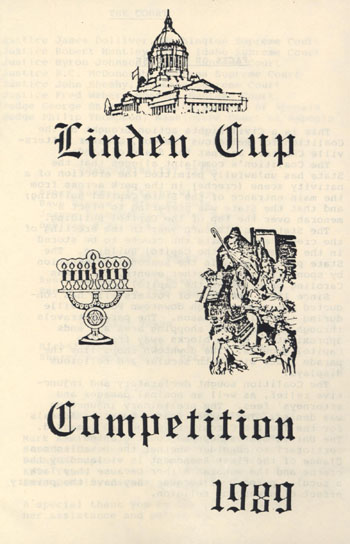 In honor of former Law Regent, Father James Linden, S. J., whose astute mind and gentle personality were gifts to Gonzaga students for nearly thirty years in the study of Jurisprudence. His interest in the students as individuals is manifested by his founding of Heidelberg Night and this Moot Court Competition.  Previously this award was titled the Annual Medal Competition in Legal Argumentation which was first given in 1935. 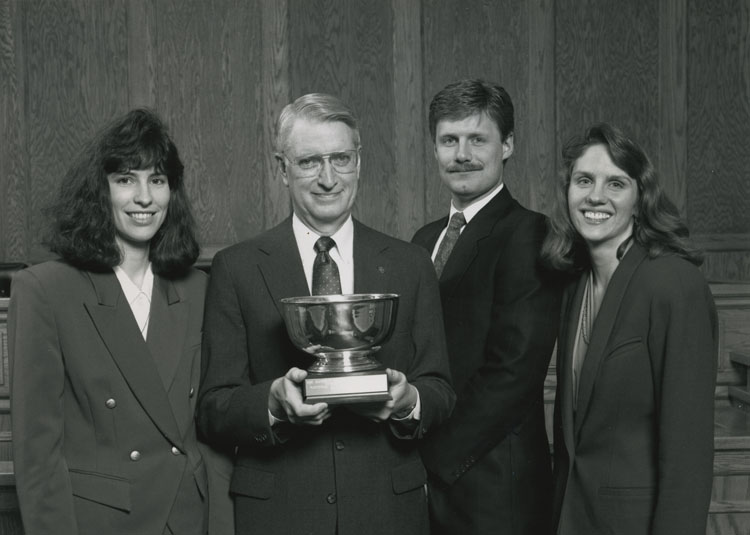 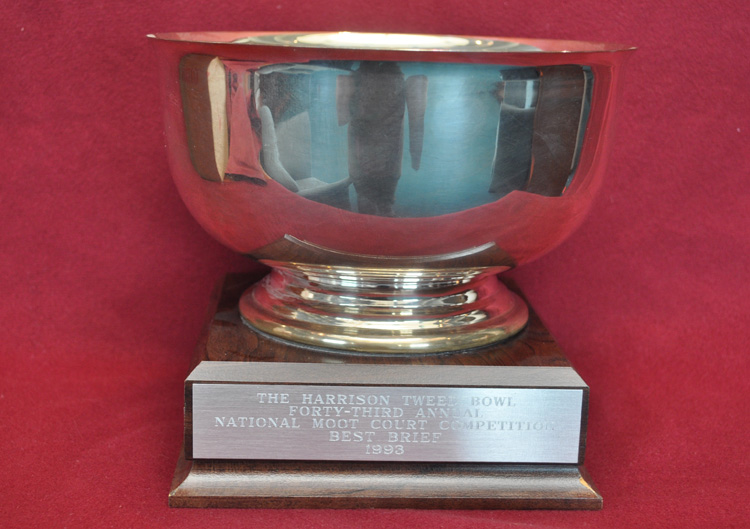 The National Moot Court Competition was created in 1947 by Harrison Tweed, then president of the New York City Bar Association, as part of a campaign to recruit younger members to the City Bar in the years following World War II. Gonzaga started participating with these external moot court competitions in 1973 – 1974 school year.

On loan from the Law School 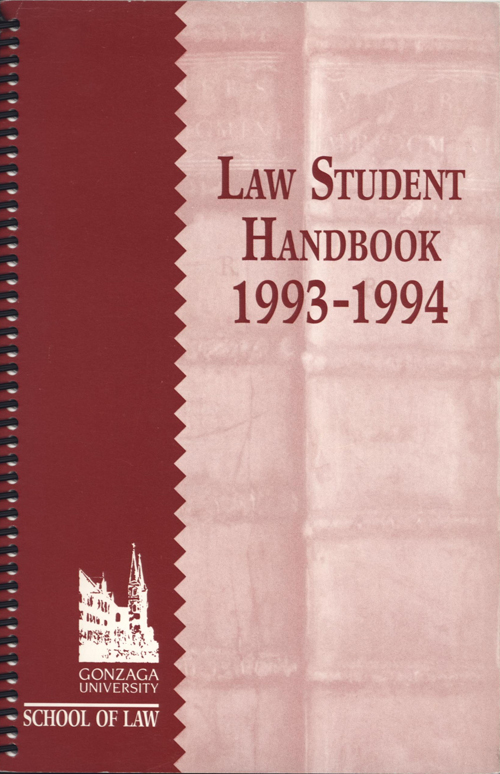 The Law Student Handbook was referred to by students to find the school’s mission statement, student conduct policies, grading, required credits, competitions, and outside activities. 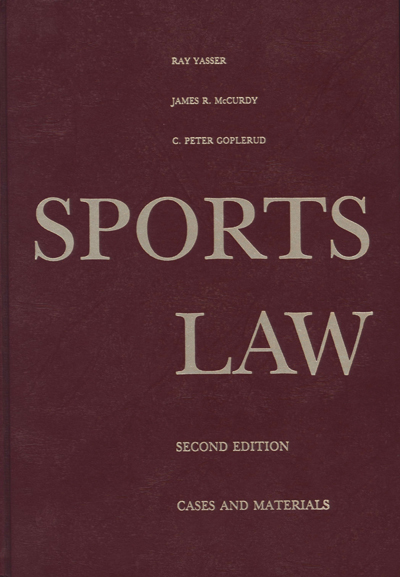 Written by Gonzaga law professor James R. McCurdy, Ray Yasser of University of Tulsa College of Law; and C. Peter Goplerud, Dean at the University of Oklahoma School of Law. Over the years, Gonzaga law faculty has published seminal works on legal education and policy. 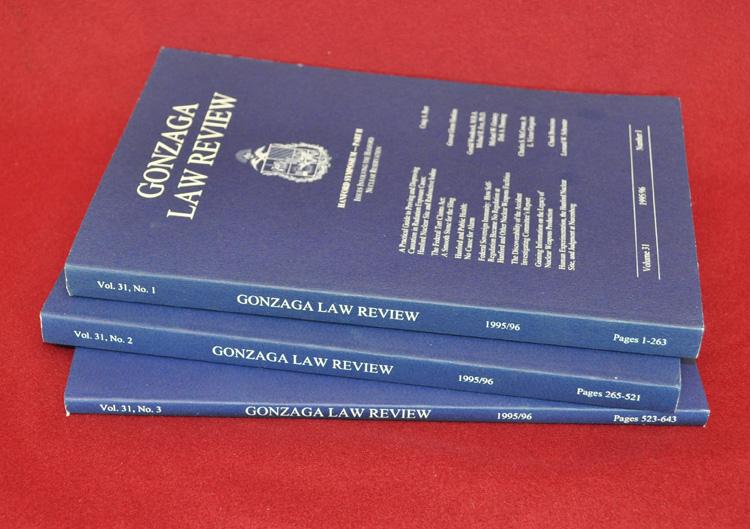 The Gonzaga Law Review is literature put out every year and is concerned with discussing current legal issues, as well as scholarly and profession studies. The first issue was published in March 1966. It was created by a small staff of dedicated and diligent students and professors. The Law Review will celebrate its fiftieth anniversary in 2016. 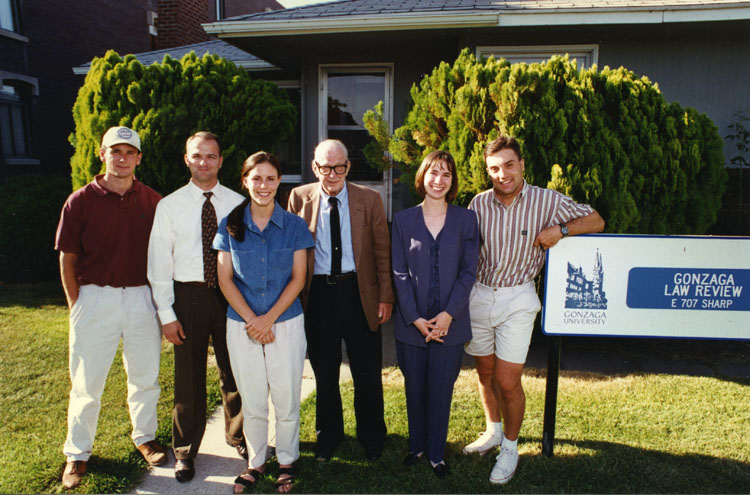 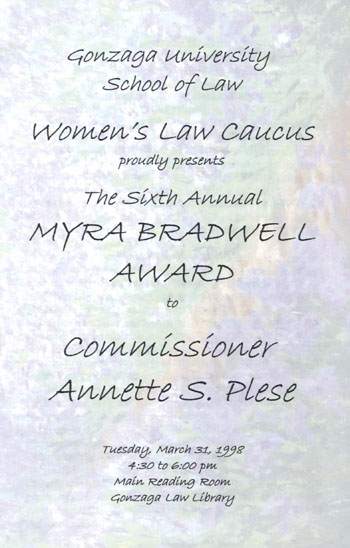 The Women’s Law Caucus presented the Myra Bradwell Award to Commissioner Annette S. Plese on March 31, 1998. The ceremony was held in the main reading room at the Gonzaga Law Library. Annette Plese ’91 was committed to heighten public awareness of domestic violence.  She was the Team Leader for the Spokane Domestic Violence Team in 1997.  She was appointed District Court Commission in February 1998 and now serves as a Spokane County Superior Court Judge.

Myra Bradwell passed the Illinois state by in 1869 but was denied admission to the bar by the Illinois Supreme Court. Undiscouraged Bradwell began publishing editorials addressing discriminatory laws. She was finally admitted to the bar in 1890. 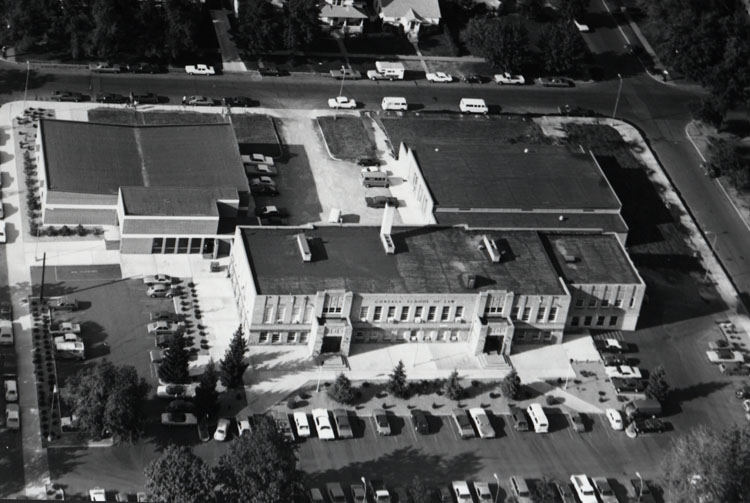 An aerial view of the Webster School law building, complete with renovations which included the addition to the main building.  In 1971 there was new library addition added to the back of the northeast section of the building and two more classrooms on the northwest edge.  The law school’s enrollment continued to grow and an addition was added in 1973 to provide the much needed classroom space and student lounge called the “Pit”. 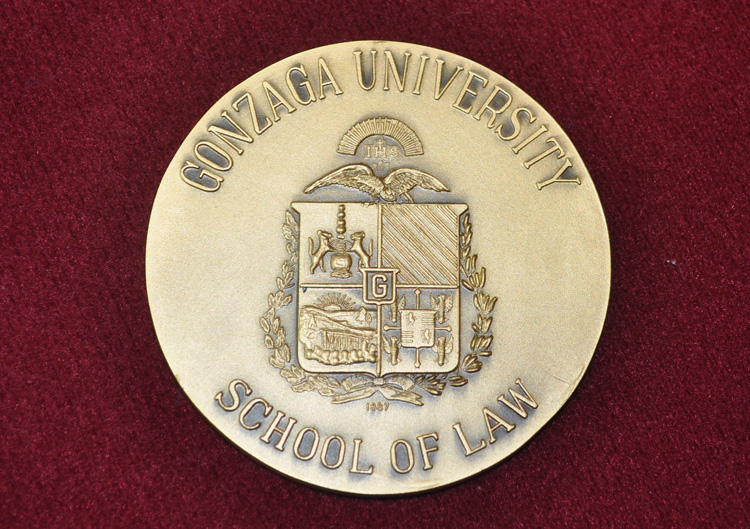 This Gonzaga University medal is awarded during law commencement ceremonies. The Law Medal is reserved for those individuals who have provided exceptional service to the law and the legal systems.  Gonzaga gave its first Law Medal in 1962 to Archibald Cox, Solicitor General of the United States.  Other winners have included Carl Maxey ’51, prominent Spokane attorney; Charles Horowitz, Washington Supreme Court Justice; and Joseph Nappi, Gonzaga Law professor. 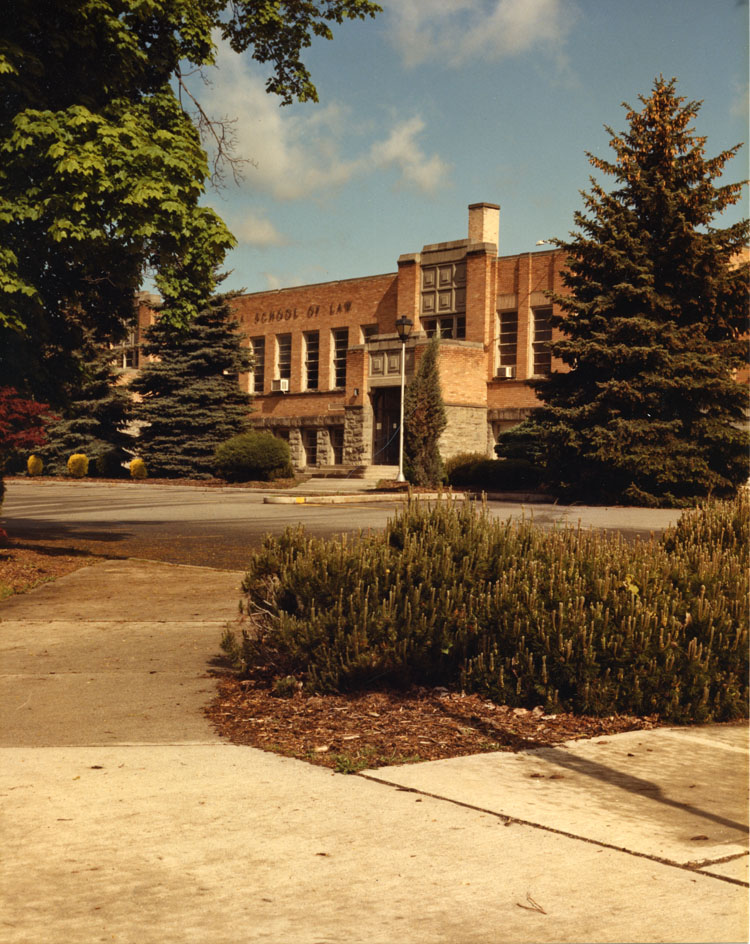