Internment and Service: Japanese Americans from the Inland Empire: Intro 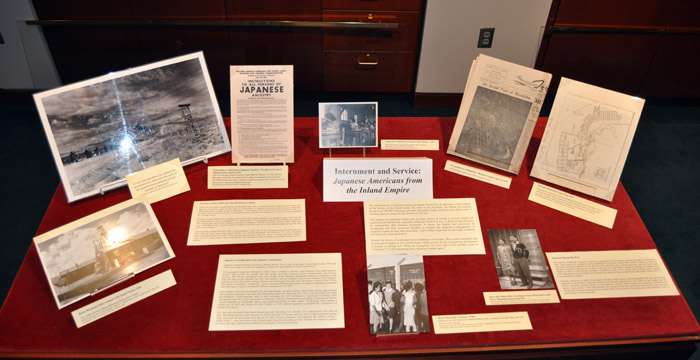 Executive Order 9066 and the Decision to Confine

Following the attack on Pearl Harbor, on December 7th, 1941, a widespread panic gripped the U.S. Many non-Japanese Americans called for the arrest or incarceration of Japanese Americans and Japanese immigrants. About 3000 Issei – leaders in their communities – were arrested in the weeks following the attack, but the U.S. President did not immediately move to punish American citizens and immigrants for the acts of war committed by a foreign nation.

President Franklin Roosevelt considered advice from his Cabinet members and generals before following the recommendation of removal proposed by Lt. General John L. DeWitt (head of the Western Defense Command). The original plan was for the voluntary relocation of Japanese, German, and Italian “enemy aliens” from west coast “prohibited zones.” Popular opinion, though, favored the removal of only Japanese aliens along with their native-born children.

The President accepted De Witt’s final recommendation, which was for the involuntary removal of all Issei and Nisei from the area west of the Sierra Nevada and Cascade Mountains. On February 19th, 1942, President Roosevelt signed Executive Order 9066 granted vast powers to the U.S. Army to create west-coast military zones where it could exclude “any or all persons” the Secretary of War’s Military Commander might desire to remove. 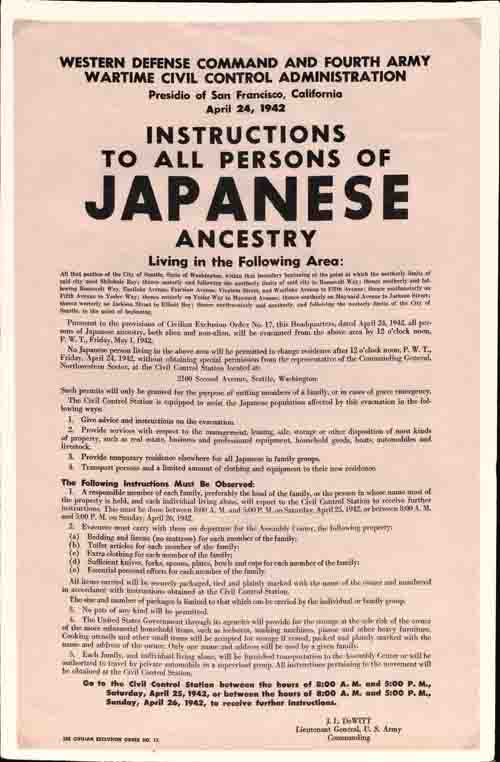 After the President issued Executive Order 9066 on February 19, 1942, the War Relocation Authority was created and in charge of registration and evacuation.

The WRA posted these signs in Japanese American communities. What instructions did it give to “persons of Japanese descent”?

First-generation Japanese immigrants called “Issei” worked as farmers, farm laborers, and small business owners. They arrived in a country that had strong anti-Asian sentiment, which stemmed from anti-Chinese feelings. The Chinese immigrants who came decades before Japanese immigrants worked in California’s gold rush and later on the railroads, but they were quickly seen as a threat to native-born workers. Anti-Japanese prejudices arose from these existing feelings and developed soon after the Issei began to arrive in the 1880s. The negative sentiment – or nativism – grew in the early 1900s as the number of Japanese immigrants increased and with Japan’s victory over Russia in Russo-Japanese War of 1905.

Anti-Japanese nativism was fueled by the growing military strength of Japan. Native-born citizens also resented the economic successes of the Issei and claimed that Issei took American jobs. These fears developed into legal discrimination, which manifest itself in laws including the 1907 Gentleman’s Agreement (excluding labor immigrants) and 1913 Alien Land Law in California. This law prohibited the ownership of agricultural land by “aliens ineligible to citizenship” and it was aimed specifically at Issei settlers. Washington State enacted a similar law in 1921 and Oregon in 1923. Finally, in 1924, federal legislation prohibited the immigration of people from Japan.

U.S. law also prevented Issei from naturalizing and becoming U.S. citizens. U.S. naturalization law allowed only “free white persons” and “persons of African descent” to become citizens. Race scientists and the average white American all agreed that Issei did not fit either of these categories. Nevertheless, the children of Issei – called “Nisei” – who were born in the United States enjoyed citizenship at birth. Despite their status as citizens, the Nisei, like their Issei parents suffered from prejudice and discrimination.

Spokane During the War

The majority of Spokane’s Japanese American communities did not experience forced evacuation or internment. They lived outside the evacuation zones established by Executive Order 9066. Indeed, Spokane’s Japanese American community tripled in 1942 when the Issei and Nisei who could moved away from the West Coast. Margaret Yamaura Ueda was one of these. At the age of 15, her family voluntarily relocated to Spokane from Seattle in order to avoid forced evacuation. Nonetheless, Ueda, a U.S. citizen, and her family had to register their whereabouts with the federal government in the same way that un-naturalized immigrants living in the U.S. were obligated to register.

Japanese Americans in eastern Washington and other western states continued grappled with the nativism and animosity of their fellow American citizens. Fred Shiosaki remembered in the wake of Pearl Harbor that his father’s industrial laundry business in east Spokane virtually ended because the community considered his family “enemy aliens.”  This same hostility led to Japanese American internment when western state governors insisted that evacuees be incarcerated in camps rather than allowed to live freely east of the prohibited zones, as other citizens of their states did. 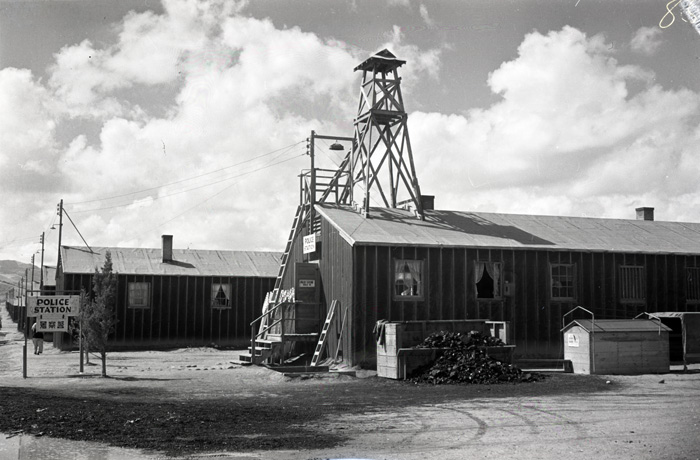 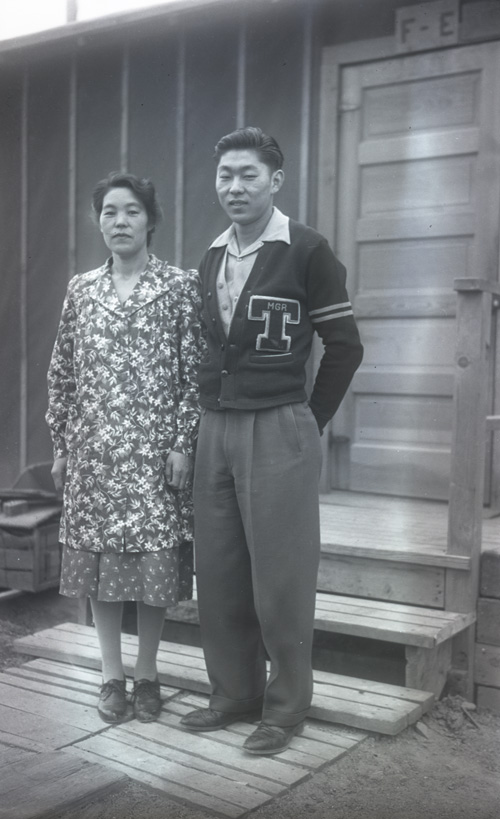 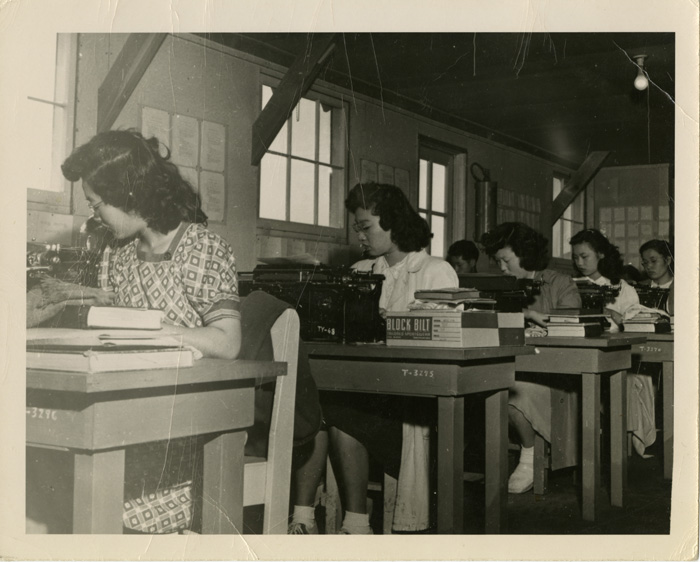 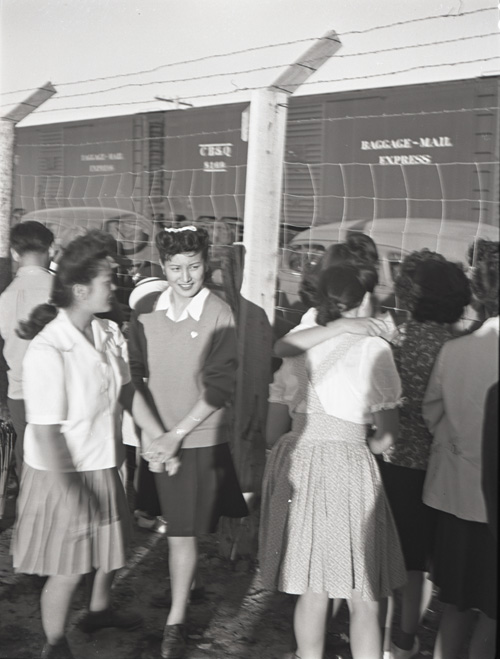 Barbed wire and fences provided internees with a constant reminder they were not free to come and go. 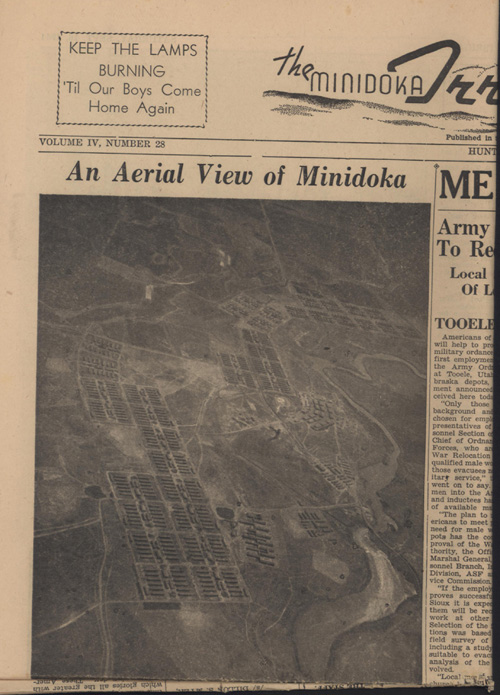 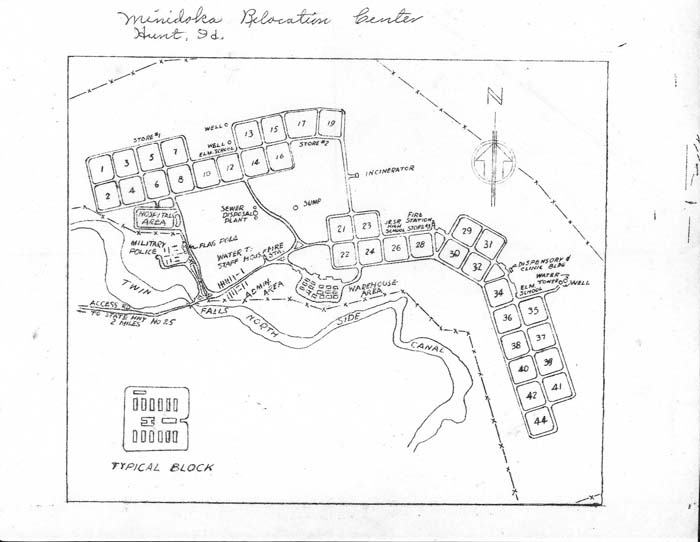 Compare the aerial view of the Minidoka internment site to the plan. The site included barracks and communal kitchens and bathrooms, tool and supply buildings, schools, administrative buildings, and housing for soldiers.