When the Relocation Centers closed by the end of 1945, there was a mixed reaction from the Japanese American internees. Many were happy to leave the isolated camps and return to their homes where they tried to re-establish lives broken by internment. Others hesitated to return home, knowing that persistent discrimination would continue to define their post-war lives. The federal government’s only assistance was $25, intended to pay for meals and a train ticket home. Some former internees returned to the West Coast, while others decided to try their luck in other parts of the country.

Very little remains of the ten “Relocation Centers,” or internment camps. After the closures in 1945-1946, government officials and local communities dismantled or moved the barracks and other buildings. Farmers bought the improved land around the camps and continued to grow cash crops.

What remains of the camps are concrete slabs, indicating where barracks used to stand, and a few guard towers, as well as historical markers. In the 1980s and 1990s, citizens undertook efforts to preserve the physical memories of the camps as well as the stories of the people who had lived in them. Six of the Relocation Camps are listed on the National Register, including Minidoka, which is now a National Park. Manzanar and the memorial cemetery at Rohwer achieved designation as National Historic Landmarks. Both Minidoka and Manzanar have also created Honor Walls commemorating the men and women who served in the military during WWII. Each site also has interpretative exhibits and museums. These efforts help preserve and commemorate the shameful history of internment as well as the experiences of the Japanese Americans during WWII. 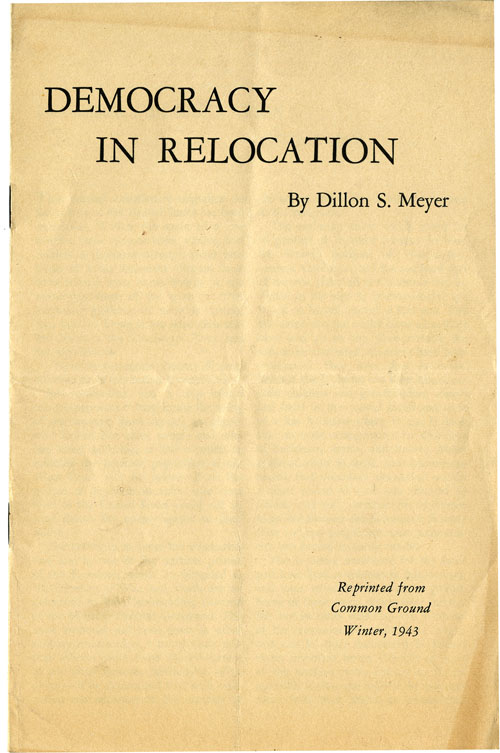 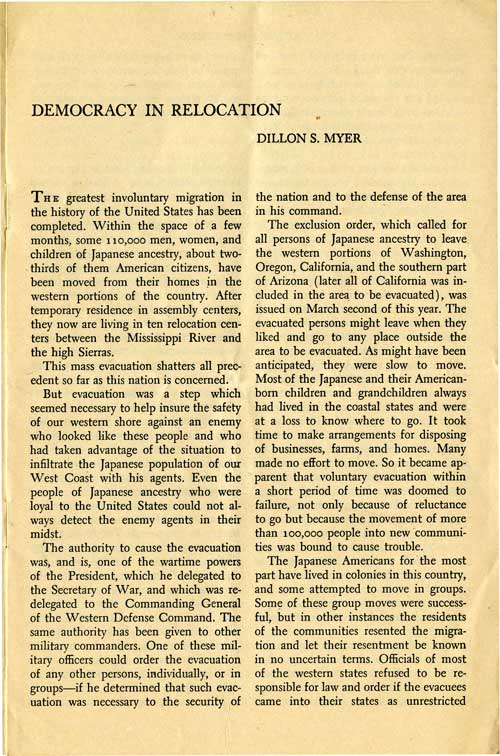 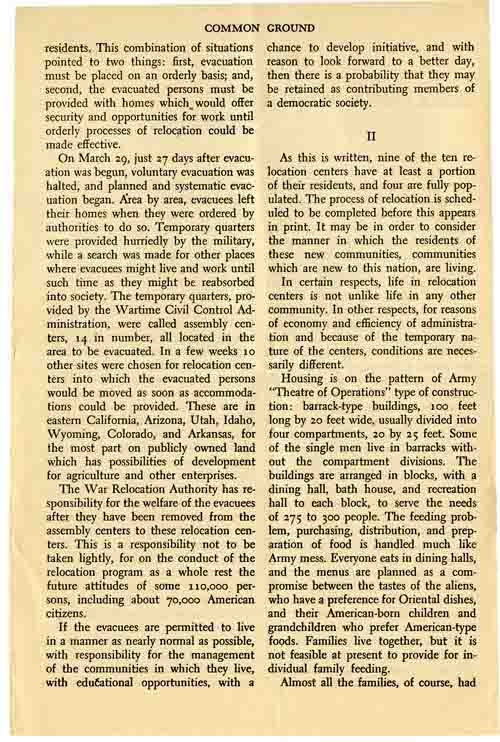 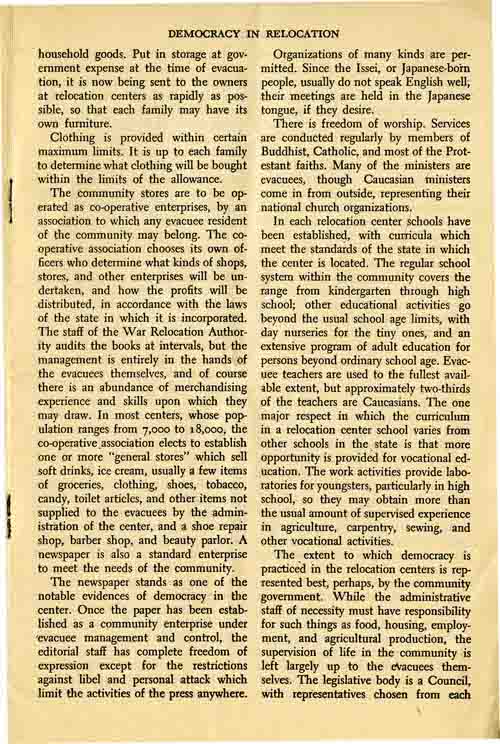 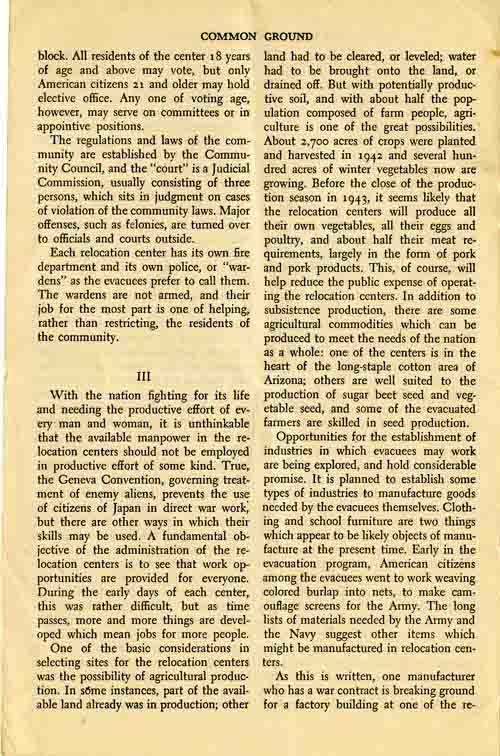 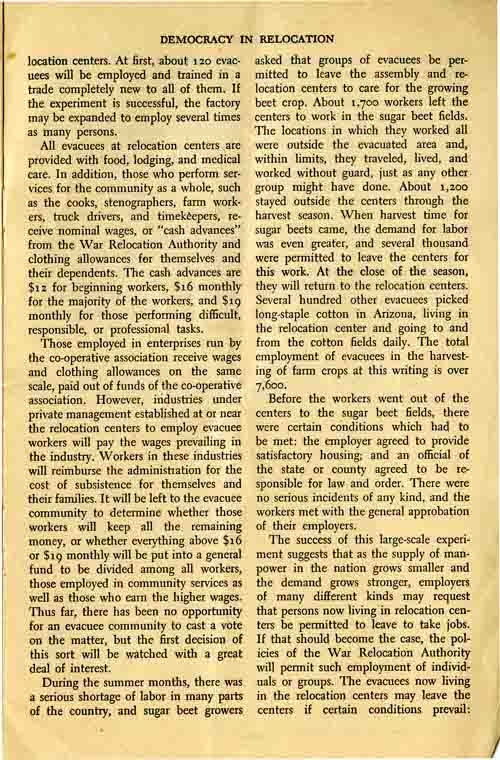 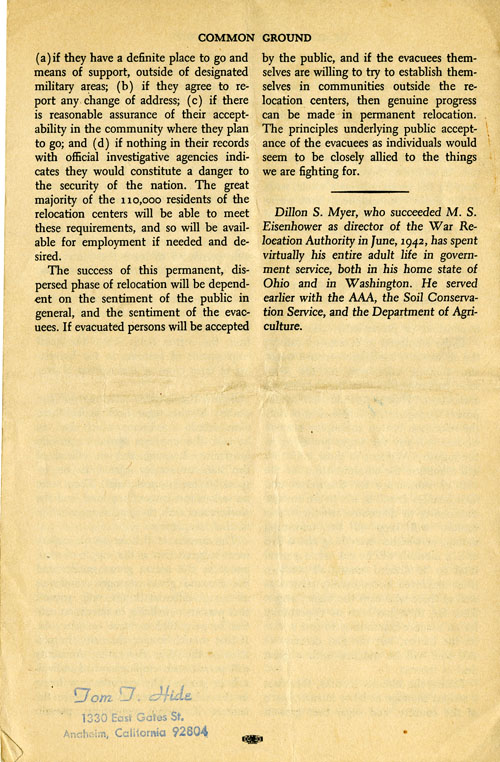 Director Dillon S. Myer headed the War Relocation Authority from 1942 to 1946 and implemented the plan for internment. In this booklet, Myer offered what he believed were good reasons to incarcerate certain Americans in Relocation Camps.

In 1980, Congress commissioned hearings on Executive Order 9066 and the impact of the Order on American citizens. Three years later, the Commissions released its findings and concluded that the internment of Japanese Americans was not a military necessity. Rather, internment was motivated by “race prejudice, war hysteria and a failure of political leadership.” The Commission recommended the U.S. Government make an official apology, that the president pardon anyone convicted of opposing internment, the curfew, or the draft, that Congress hear redress grievances, and that appropriate funds all Japanese American survivors of the War, not just those who were incarcerated. In 1988, Congress acted upon all these recommendations when it passed the Japanese American Redress Bill, called the Civil Rights Bill of 1988. Each survivor received an apology and a $20,000 reparations check from the government.

For some Japanese Americans who had experienced war-time nativism, forced removal, and incarceration, the law began to acknowledge the humiliation, embarrassment, or the anger associated with internment. In some families, redress ended years of silence between parents and their children. The older generation was unburdened and some began to talk about their time behind barbed wire fences.

On December 7th, 1991, while commemorating the fiftieth anniversary of Pearl Harbor, President George H.W. Bush issued a brief apology to American citizens and their families for wartime internment. As he memorialized the conflict that brought the U.S. into the war, the President also said:

“[i]n remembering, it is important to come to grips with the past. No nation can fully understand itself or find its place in the world if it does not look with clear eyes at all the glories and disgraces, too, of the past. We, in the United States, acknowledge such an injustice in our own history: the internment of Americans of Japanese ancestry was a great injustice, and it will never be repeated.” 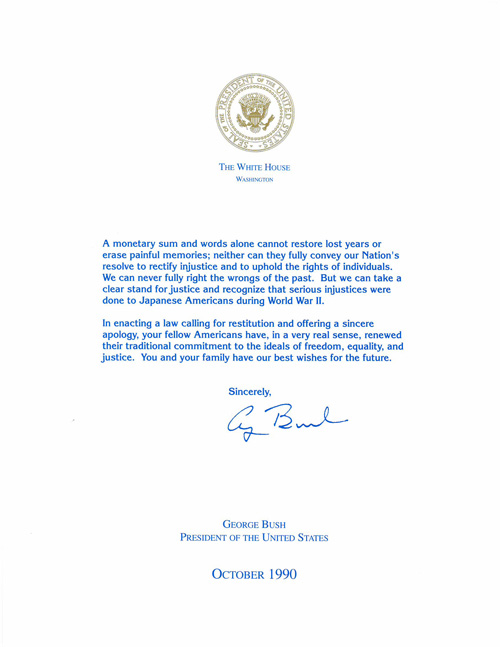 Reproduced from the private collection of Margaret Yamaura Ueda

Part of the government’s apology to Japanese Americans included a letter from President George H.W. Bush, and also included a $20,000 check.

Some Japanese Americans had opportunities to leave internment camps for work or to attend school. Whitworth College and Washington State College (in Pullman) provided a refuge and an education to some of these people. While attending college, Japanese Americans lived like other American citizens and enjoyed many of the freedoms that internment had taken from them. As these materials show, Japanese American students became successful players on the basketball team and they distinguished themselves academically. 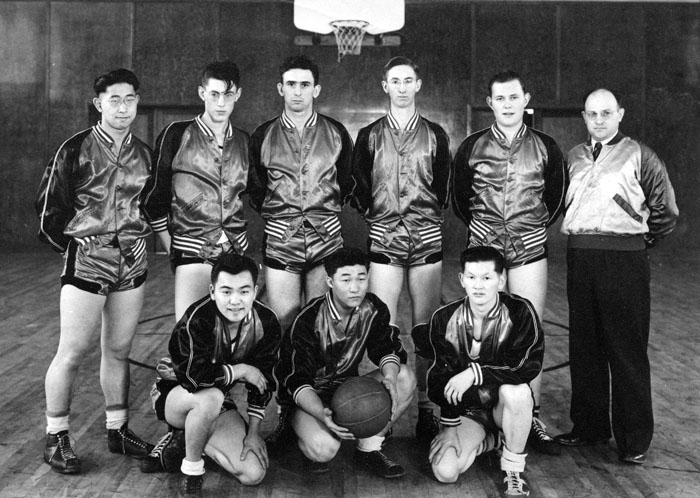 Forced by internment to end her studies at the University of Washington, Tomiye Nishimoto found a new college home at Whitworth during the war. She secured release from Minidoka and moved to Spokane to attend school. She graduated from Whitworth in 1945.

The student newspaper introduces some of the newest students to campus, including Joe Ike who had been confined at the Minidoka internment camp.