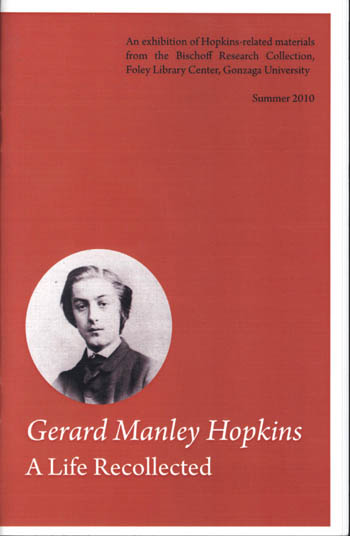 Gerard Manley Hopkins, S.J. (1844-1889) was an extraordinary poet who “caught” in words the “grandeur of God” and nature’s “dappled” bounty as well as the “forepangs” of a soul “pitched past pitch of grief.” After ordination in September 1877, he served in several different parishes throughout England and Scotland before accepting a dual appointment in Dublin as Professor of Classics at the reconstituted University College (UC) and Fellow of the recently-established Royal University of Ireland (RUI), an examining institution. Since the posthumous publication of his poems in 1918, he has been celebrated for his exceptional verse and prose; we have also learned about his gifts as sketch artist, keen observer of the natural world, and self-taught musician.

Anthony Bischoff, S.J. (1910 -1993), a long-time member of Gonzaga’s English Department, began gathering Hopkins-related materials in the late 1940s, while a doctoral candidate at Yale University (Ph.D., 1952), but he collected widely and resolutely until the early 1990s. He did so with the help of Ruth Seelhammer, curator of the Hopkins Collection at Gonzaga for more than forty years, and the financial and personal support of Gonzaga University and the Oregon Province, Society of Jesus.

Gerard Manley Hopkins broke the cardinal rule of keepsaking – thou shalt not dispose of anything – at least twice. The first occasion was his decision to burn poetry manuscripts before joining the Society of Jesus in September 1868, a “slaughter of the innocents” that symbolized the apparent end of secular and aesthetic concerns and an embrace of religious life. It was an exaggerated gesture (and his friend and fellow poet Robert Bridges already had copies of many poems), but characteristically so. The second occasion was mournful: in 1885, at “at a third / Remove” in Dublin, news of a friend’s recent death (probably a suicide) prompted Hopkins to “overhaul my old letters, accumulations of actually ever since I was at school, destroying all but a very few, and growing ever lo[a]ther to destroy, but also to read, so that at last I left off reading; and there they lie and my old notebooks and beginnings of things, ever so many, which it seems to me might well have been done, . . . ruins and wrecks” (to Alexander Baillie, 8.05.1885).

And yet – despite the many dislocations in his life, the many institutional addresses from suburban London to northern Wales, from Oxford to Liverpool to St Stephen’s Green, Dublin; despite a death from typhoid that necessitated the disposal of many worldly goods; and even though family members, friends, and colleagues discarded items after his death – the material traces of Hopkins’s life persist. Robert Bridges is to be thanked for preserving much of the poetry, carefully pasting copies into the autograph albums now housed in the Bodleian Library, Oxford. Of the Jesuits who worked to safeguard his papers (initially, Joseph Keating, S.J. and Francis Bacon, S.J.), Anthony Bischoff, S.J. was singular in his devotion to the cause and the depths of his resourcefulness. Although Bischoff never produced the biography that initially impelled the collecting of archival matter, his desire to find, assemble, and preserve all things Hopkins resulted in the extraordinary research collection at the Foley Library, Gonzaga University.

Bischoff exhibited a number of items during his years at Gonzaga, yet he neither organized a significant display nor wholly ordered his collection (which was accumulated randomly and exhaustively). That was the monumental task, after his death, facing Stephanie Edwards Plowman, Foley’s Special Collections Archivist. Her 2001 monograph, G. M. Hopkins: An Inventory of the Anthony Bischoff Research Collection at Gonzaga University, provides a full accounting and description of the artifacts and research materials.

“Gerard Manley Hopkins: A Life Recollected”, curated by Stephanie Plowman and Lesley Higgins, was prepared in honor of “Regis at Gonzaga: The Hopkins Conference,” co-sponsored by Regis University (Denver, Colorado) and Gonzaga University in July 2010. Lesley Higgins of York University in Toronto, Canada provided the text for this exhibit.