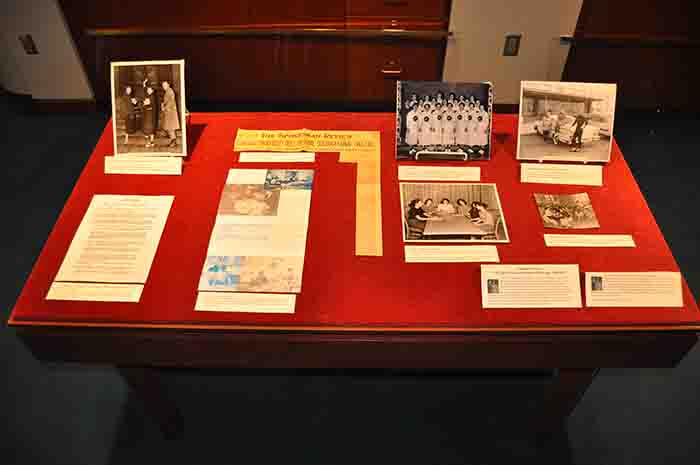 In 1947, the Academic Committee for Long Time Planning, proposed and approved the admittance of female students into Gonzaga University to arrive in the Fall of 1948. Prior to this date, women were allowed to study in the areas of Education and Nursing or to attend summer classes. Now, a larger variety of undergraduate studies would be open to them. The decision to admit female students was made on the basis that Catholic education should extend as far as possible and admitting female students would allow male students to more easily find Catholic girls to marry. The committee also felt that Gonzaga had a responsibility to become coeducational, as there were few coeducational, Catholic universities in the country at the time. These newly admitted female students were referred to as co-eds and were pioneers on campus upon their arrival and for many years to come.

This exhibit aims to examine the change that the admittance of female students brought in academics, faculty, athletics, organizations, residence life, and student life on campus. In the first 25 years after their admittance, Gonzaga saw a number of changes brought about by this decision. Co-eds brought a feminine touch, that had previously been absent, as one could see from the lack of female restrooms on campus. They also provided more competition for male students in the classroom, forced change in many organizations that were previously male-only, and created a need for the construction of new dormitories.

“Gonzaga University Will Become Coeducational This Fall,” The Spokesman-Review, July 22, 1948. 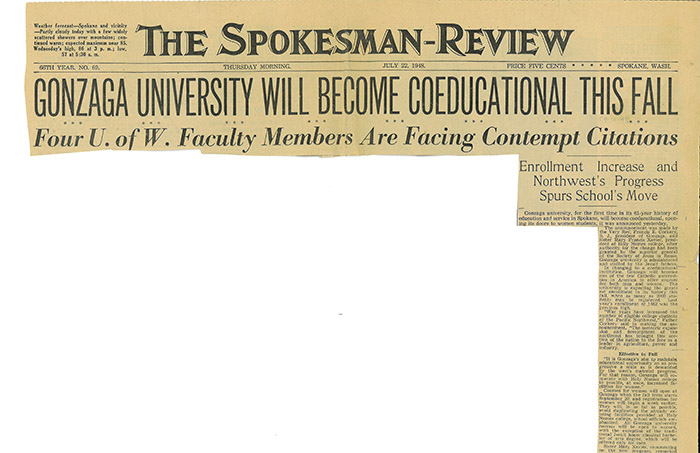 The admittance of women into Gonzaga made waves in the community of Spokane. Gonzaga was one of the few Catholic universities in the country to be co-ed at the time. 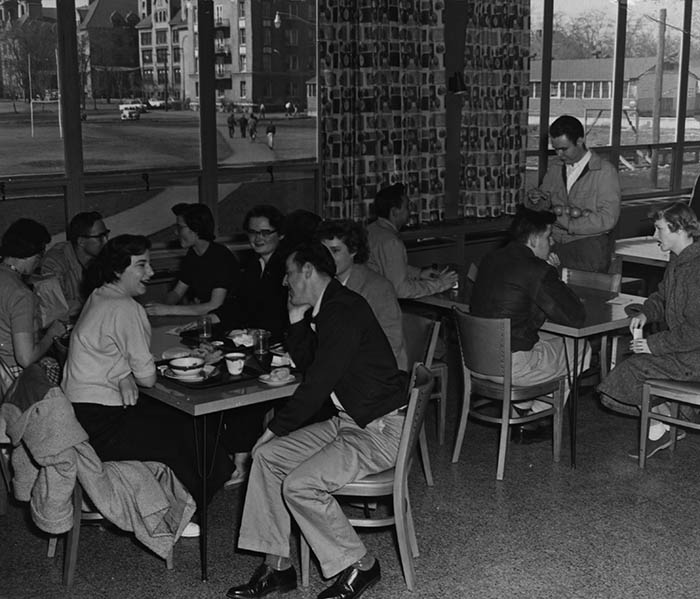 Women students were not allowed in the dining hall until 1950. Sights, such as the one seen in this photo, were the new normal that came with the admittance of female students.

Female Students in Front of Madonna Hall, about 1954. 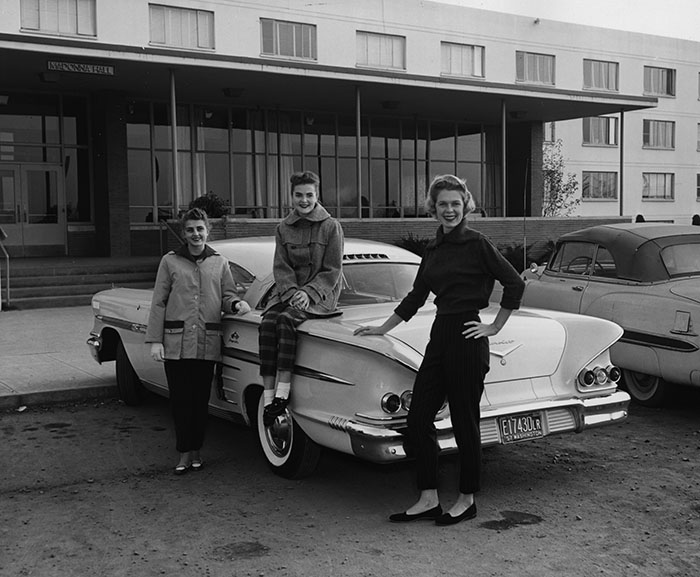 Female students made a splash upon their arrival at Gonzaga University. The rise in number of female students would create the need for the building of new residence halls in the 1950’s and 1960’s. Before the construction of female dormitories, coeds lived in Crimont, which was a house. 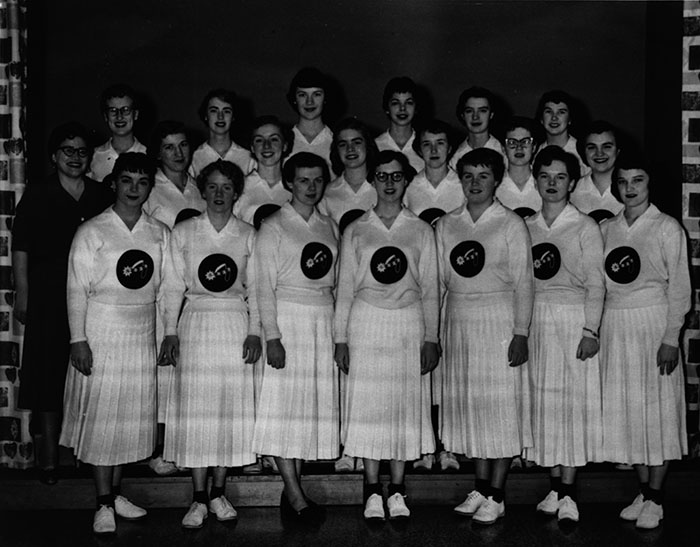 All-female clubs, such as the Spurs, arose to help, not only give female students a place at Gonzaga University, but to also bridge the gap between male and female students. The Spurs, now known as the Setons, were a counter-part to the Knights of the Kennel. 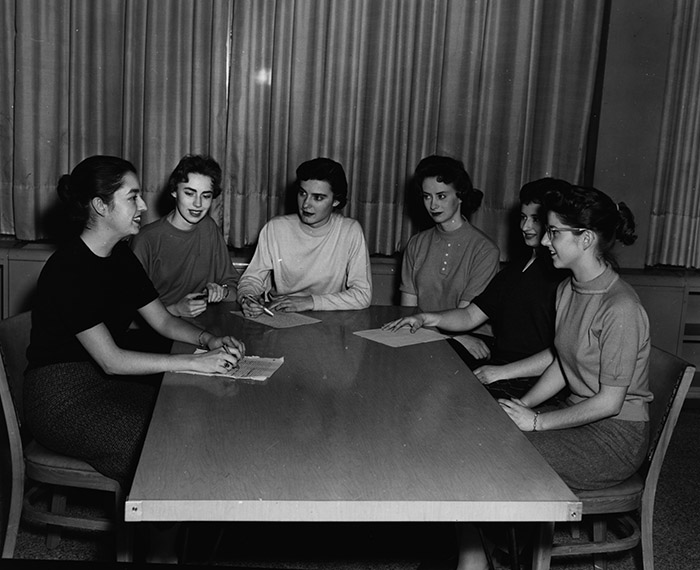 Giving the new group of female students a voice at G.U. would become an important role taken on by the members of Associated Women Students of Gonzaga University (A.W.S.G.U). 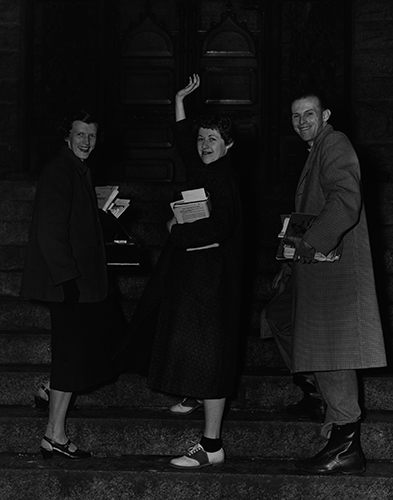 Female students at Gonzaga were enthusiastic about learning, even at 8 a.m. These students of the School of Education, smile as they walk into the Administration Building in 1960.