Studying Latin in the Dominican Missal

Perusing the Dominican Missal, one can explore how Latin was presented in deluxe printing of the early sixteenth century. Moreover, teachers of Latin at all levels can use the digitized pages in class in various ways. Beginning students can gain the experience of seeing some already learned words in a beautifully printed rare book, while advanced students perhaps with specific interests in liturgical, biblical, or devotional texts can pursue detailed research. The iconography of the missal is best studied by readers of Latin, who can investigate how image and text correlate. The depictions and texts concerning women constitute an area of particular interest. The main webpage on the missal has thumbnail images of more than fifty openings (and so over 100 pages) from that missal. Many transcriptions of texts from those pages are provided alongside the thumbnail image. Thus the reader can compare the transcription with the original and can further read or even transcribe more of the texts. To access the PDF file, click on the thumbnail and then enlarge the PDF to get a large image of the opening for ease in reading the Latin (and studying the artwork).

Spelling and spacing. The Dominican Missal of 1521 is a convenient way to introduce students to the different ways of making certain letters and also to the pre-modern conventions in punctuation, spacing, and capitalization. On the titlepage (shown below) most words at the end of a line of type are carried over onto the next line. The modern convention is to insert a hyphen to alert the reader to the word-break, but in medieval manuscripts and early printed books the hyphen was rarely if ever used. The tall -s- seen in some of the founding documents of the United States, as in the word "Congress" (which looks in old documents like "Congreff") is a carryover from the ess seen in this printed book, as in the last word in the top line of the title. Often manuscripts and early printed books made no distinction between u and v or between i and j. The modern English norm is to capitalize the first word of each sentence and proper nouns, but often capital letters are reserved in medieval manuscripts for the start of sections of a text. Students who have learned classical Latin will discover that medieval spelling was in some instances simplified, with -e- used where classical Latin had -ae-. In particular, it is important to note that the feminine genitive singular ending, -ae, will often be found as simply -e. An example of this simplified spelling is found in the title page, seen right below, where the second word has -e- instead of a classical -ae- in the noun for "Preachers." 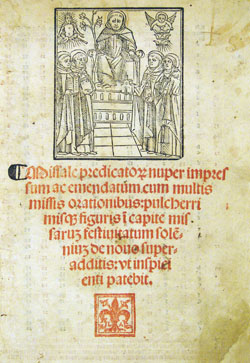 In the first line of the title the second word ends with an r with a line drawn down through it. That is a standard abbreviation for the genitive plural ending -um. In the fourth line the first word ends in a q with what looks like the number 3: that was a common abbreviation for the enclitic -que. In the fifth line the last word has an -e- with a line drawn over it. That line is called a "suspension mark" and indicates that a nasal letter (an m or n) has been omitted.

The transcriptions included on the main webpage for the Dominican Missal use the standard way of showing an abbreviation, namely by putting square brackets around the letters indicated by the abbreviation. Thus, where the book itself has "dni" with an abbreviation line over the "n," the transcription has "d[omi]ni." Each genre of manuscript or printing had certain terms commonly abbreviated. Books on Aristotle abbreviated his name, and liturgical books abbreviated the nomina sacra, the "holy names," because they were used so often. "Dominus," "Deus," "Iesus," and "Christus" are regularly abbreviated in the Dominican Missal.

Tools. Invaluable tools for studying abbreviations in medieval manuscripts and early printed books are volumes by Adriano Cappelli (1859-1942), archivist and paleographer of the Royal Archives at Parma. He prepared a handbook with an alphabetical arrangement of abbreviations, with reproductions of more than 14,000 abbreviations used in medieval manuscripts and documents. After his death, the work continued to be revised, through a sixth edition. The following are in the Reference Collection on the First Floor of the Foley Library at Gonzaga University:

For study of early medieval Latin, written before the ninth century, an eleven-volume set of over 2,000 facsimile samples from 1811 manuscripts is available at Gonzaga University.  By analyzing the handwritten scripts, scholars can identify where and when a manuscript was written and eventually reconstruct the history and transmission of texts. The Gonzaga Collection: Rare Books from the Jesuit Heritage, contains Professor Lowe's estimable tool of humanistic research, which was formerly owned by St. Francis Xavier Novitiate at Sheridan Oregon:

Special Consultant to the President for Rare Books and Manuscripts