St. Antoninus, Archbishop of Florence, was a Dominican reformer and theologian. Although his baptismal name was Anthony, he was known by the diminutive Antoninus because he was widely beloved. For his theological acumen, he took part in the Council of Florence (1439). Shortly before his death in 1459, he wrote a four-volume Summa Theologica focusing on morality. This work was quite popular. In the fifteenth and sixteenth centuries several abridged versions were also prepared for use as manuals for confessors and penitents. 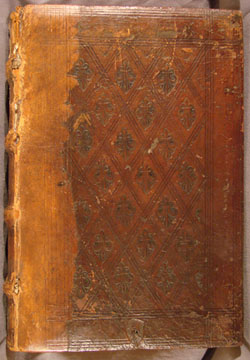 Antoninus' Summa was first printed in Venice in 1477 (Gonzaga Inv A42). During the next fifty years fifteen more editions appeared throughout Europe. The Gonzaga Collection owns the fourth volume of the 1490 edition published in Strassburg by Johann (Reinhard) Grüninger; the fourth part was dated 3 July 1490. Only four other libraries in the world are identified as owning one or more parts of this edition, in the international library catalog recording the holdings of over 60,000 libraries (WorldCat).

The front cover is hand tooled. 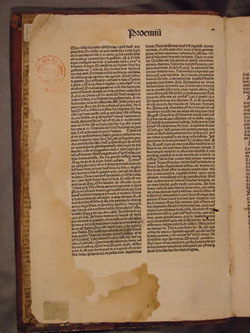 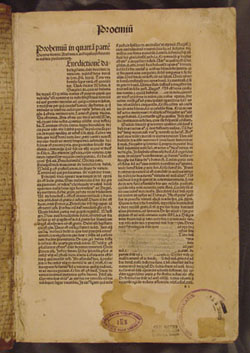 On the facing page, shown here, are more Jesuit book stamps in the lower right margin. The oval stamp is from the Jesuit College at Tuquet near Mousquet in Belgium. The stamp reads: "Collegium Tuquetanum Beatæ Mariæ Virginis, IHS."

The printer left an area blank for a calligrapher to add a colored initial, in imitation of the decoration of medieval manuscripts. The omitted letter is the B of Benedictionem. For an incunabulum with hand-illuminated initials, see the 1484 Roman Missal in The Gonzaga Collection.

Water damage washed away an area of printing in the right column. One can see that the water staining in the lower and outer margins affected both this page and the one facing it, shown above. 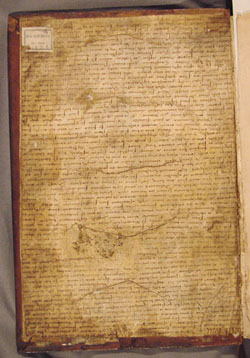 Printers of early books often "recycled" old manuscripts by using leaves from them as pastedowns lining the inside of the covers. The front pastedown is shown to the left.

In the upper left corner is the book plate of the Jesuit College in Bologna. The plate reads: Bibl. Coll. Bolon. Soc. Jesu. 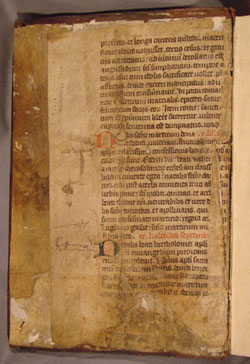 To the right is seen the folio from a medieval manuscript used as a pastedown on the inside back cover of this volume. Although the folio was pasted in upside down in the book, it is shown right side up here, so that the text can be read. The alternation of red and blue initials on this folio was common in medieval manuscripts. A penciled note identifies this as a leaf from a martyrology written in 1290. It may be the oldest physical item in the rare holdings at Gonzaga University.

The full text of this four-volume work is in the stacks at the Foley Library, in a modern facsimile edition of the noted 1740 edition printed in Verona [Oversize BX1749.A65 1740 (facsim) 1959]. Because Antoninus treated juridical matters so thoroughly here, the Chastek Law Library at Gonzaga University also owns a microform copy of that edition (BX1935.H4 No. 146 in the microfiche collection).