Undefeated since 1941: A History of Gonzaga Football: Case 3:Star Players and Coaches

The football team’s total record over the years was 127 wins, 99 losses, and 18 ties. Sixteen distinguished Gonzaga football alumni went on to play professionally and two are members of the Professional Football Hall of Fame. Many football alumni could not stay away from the sport and found themselves coaching at other universities. However, the majority left their football glory days in the past and pursued careers as businessmen, lawyers, priests, and doctors. 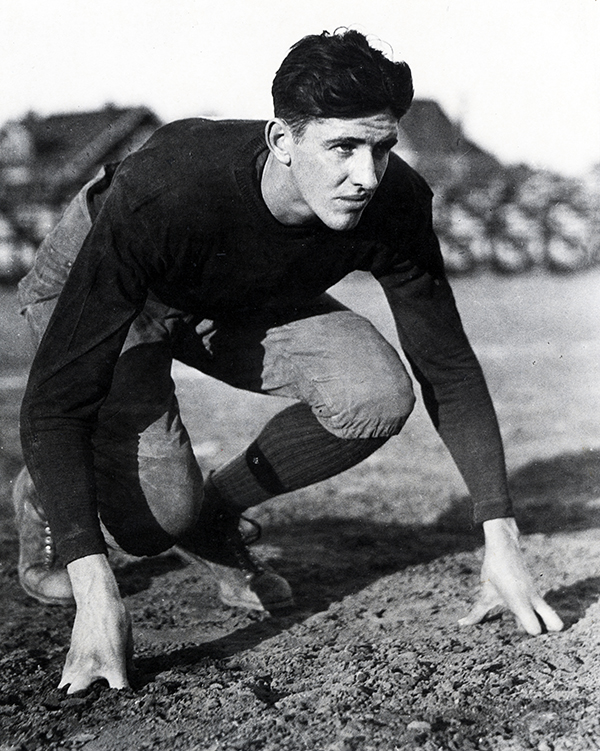 Art Dussault played center on the great football squads of the early 1920’s. During the last few minutes of the 1925 game against the Haskell Indian Institute, he scooped up a fumbled punt and ran 30 yards for a touchdown. If it were not for Dussault, Gonzaga would not have scored at all. Dussault played football, basketball and ran track at Gonzaga. He was awarded the John Luis Barrett football medal in 1925 for his athletic skill as a center on the football team.

Also known as Mr. Gonzaga, Dussault spent seventy years on Gonzaga’s campus. After graduating from Gonzaga with a master’s degree in religious studies, he entered the Jesuit priesthood. He served Gonzaga as Dean of Men and as Athletic Director in 1942 and was the Director of Public Relations and Alumni Coordinator from 1945-1955. From 1955-1958 he was Director of Development and Public Relations and from 1958-1990 he served as Vice President of the University.

Houston Stockton played halfback for Gonzaga from 1922-1924. He was the captain of the 1924 team that won the Northwest Conference Championship and is considered the best football team in Gonzaga history. There are many great Stockton highlights but one that stands out is on Christmas Day, 1922 in a game against West Virginia. After scoring one of the two touchdowns of the game and throwing two passes for 45 yards each, he became the star of the West. Another high point for Stockton's football career at Gonzaga was the game against The University of Detroit on Thanksgiving Day 1923. He scored all seven of Gonzaga’s points. After graduating, Stockton went on to play fullback in the National Football League for the Frankford Yellow Jackets, Providence Steamrollers, and the Boston Braves. His name may sound familiar because he was John Stockton’s grandfather. 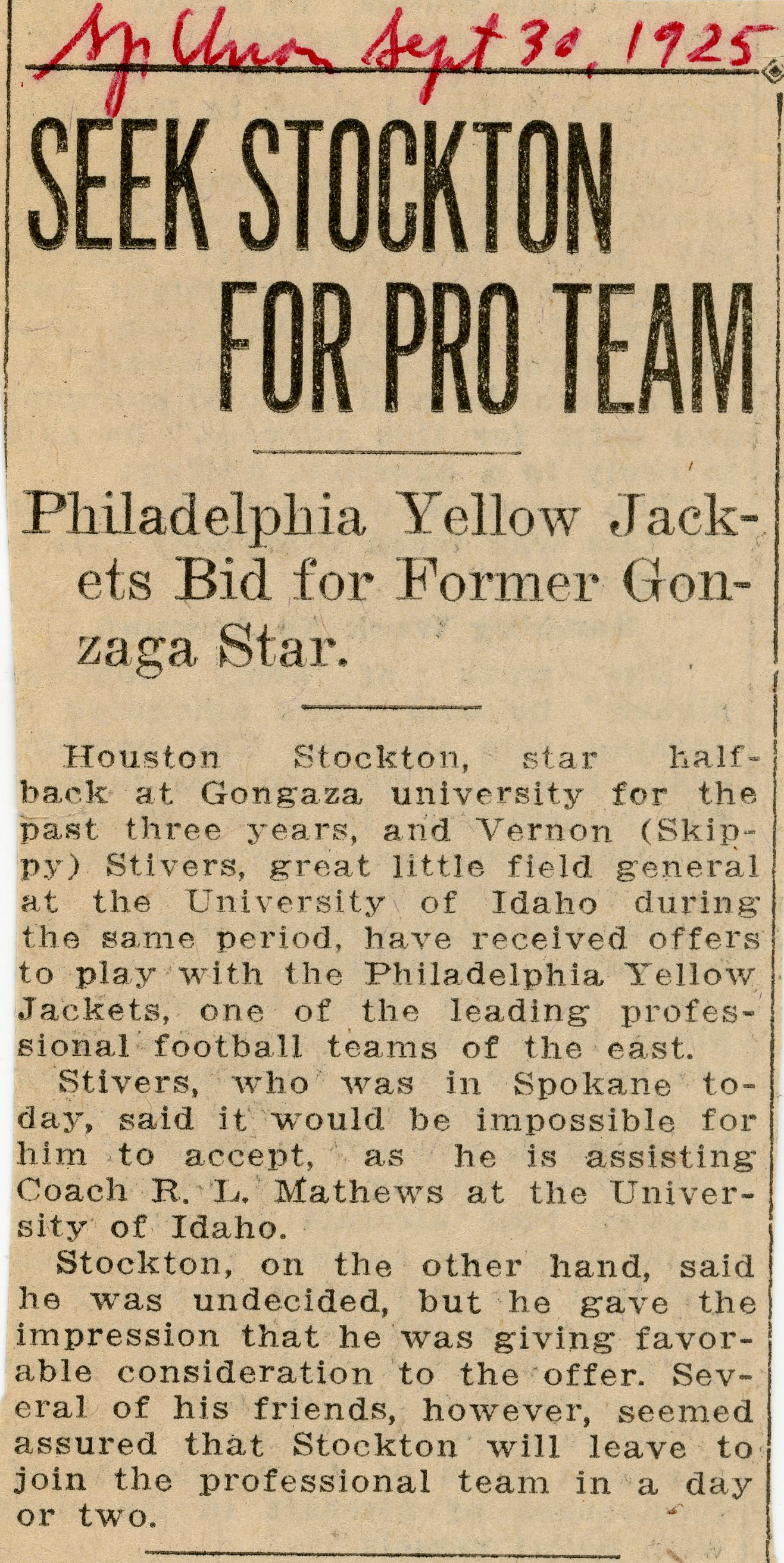 Article in the Spokane Chronicle reports on rumors that Houston Stockton will play for the Philadelphia Yellow Jackets. 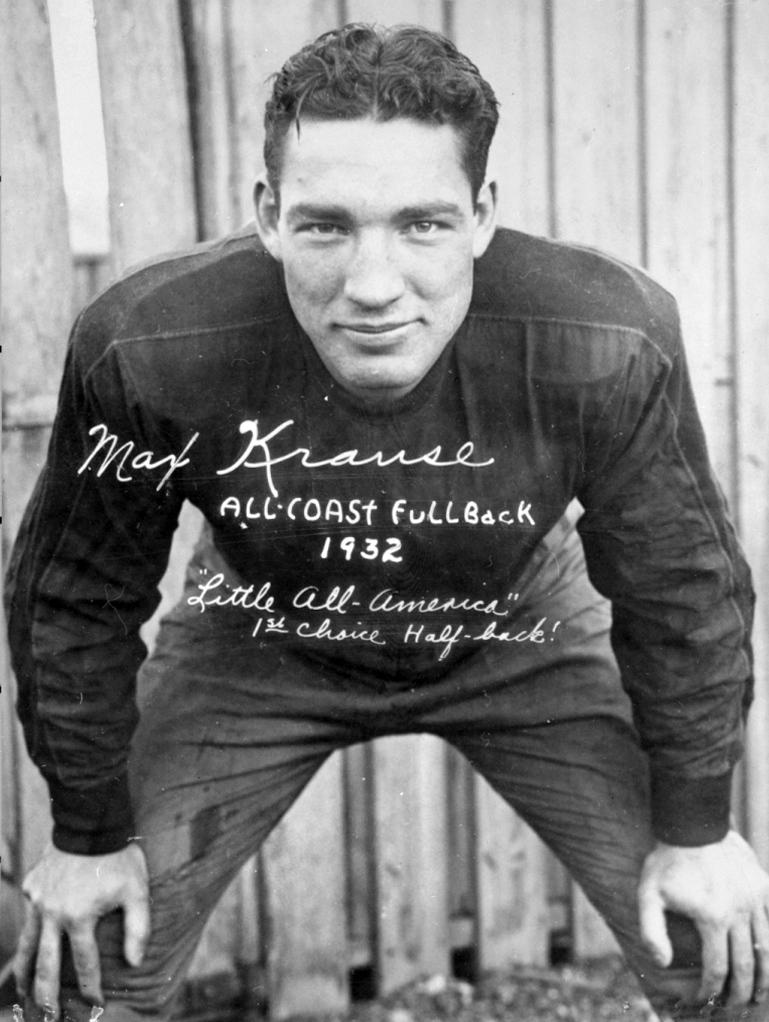 As a Spokane native and Gonzaga High School alumus, Krause was a fan favorite. He played fullback and halfback for Gonzaga from 1930-1932. During his senior season, Krause was the highest scorer on the West Coast with 88 points and 1044 yards rushed. After graduating with a degree in philosophy, Krause played professionally for eight seasons in both the American Football League (New York Giants) and the National Football League (Washington Redskins). 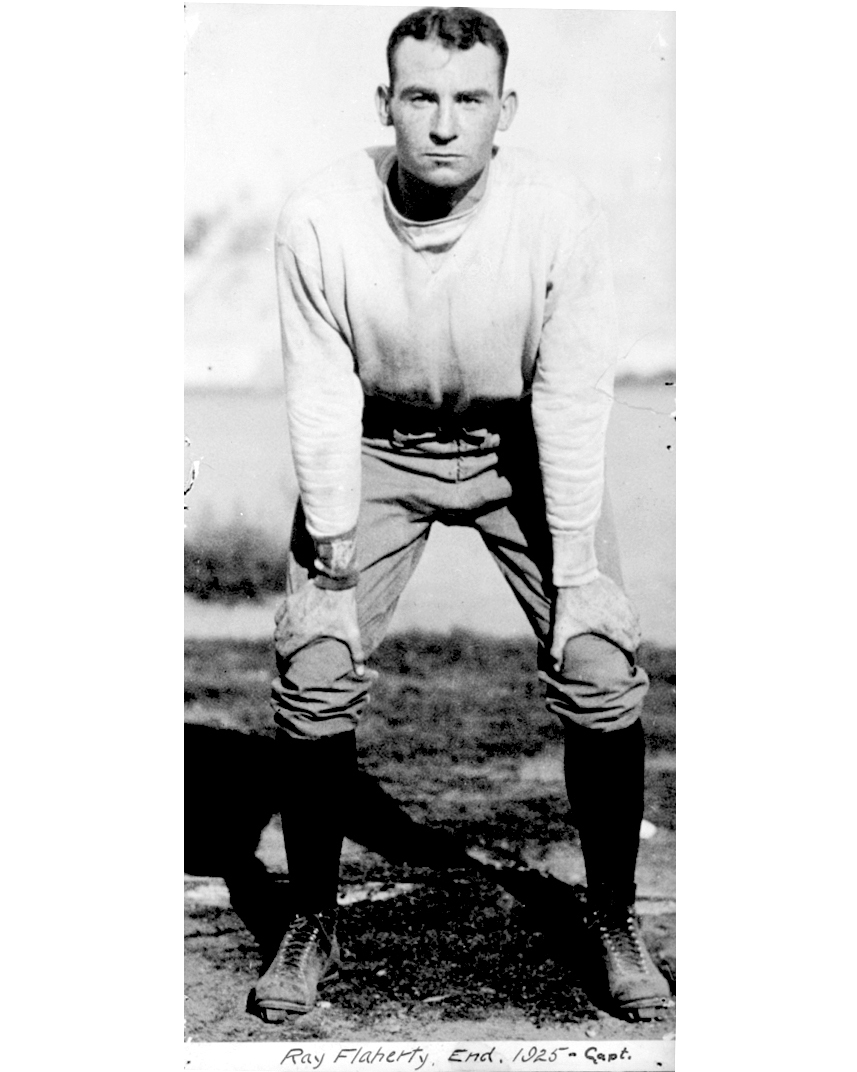 Ray Flaherty was the team captain of the 1925 team which had a record of 7-2-2. He played at Gonzaga from 1922-1925. Flaherty played professionally for eight seasons on the New York Yankees and New York Giants. He then had a brief stint at Gonzaga as the coach for both basketball and football in 1930. Flaherty gained his fame as the coach for the Redskins. He won four division titles (1936, 1937, 1940, 1942) and two NFL Championships (1937, 1942). Flaherty was inducted into the Professional Football Hall of Fame in 1976 for his excellent coaching skills. The 1937 invention of the screen pass is attributed to him.

Houston Stockton played as left halfback, so this position was left empty when he exited Gonzaga. Speculation was that Ray Flaherty would take his place because Coach Clipper Smith had him practicing as a halfback during Spring training. 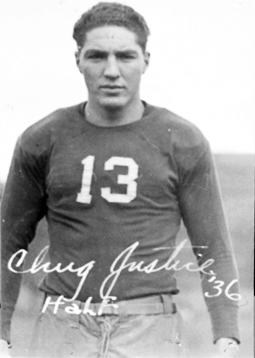 Known as Gonzaga’s best ball carrier, Justice played halfback under Mike Pecarovich from 1933-1936. Justice was chosen to participate in the 1936 East-West game and was named best block back and defensive back. The nickname Chug came from his ability to plow or chug right through the line of defensive linemen. Justice played seven seasons professionally for the Boston Redskins and won two NFL championships with them. He was also a member of the 1942 professional bowl team.

Justice running with the ball on the far right. Gonzaga won the game against the University of Idaho 7-0. 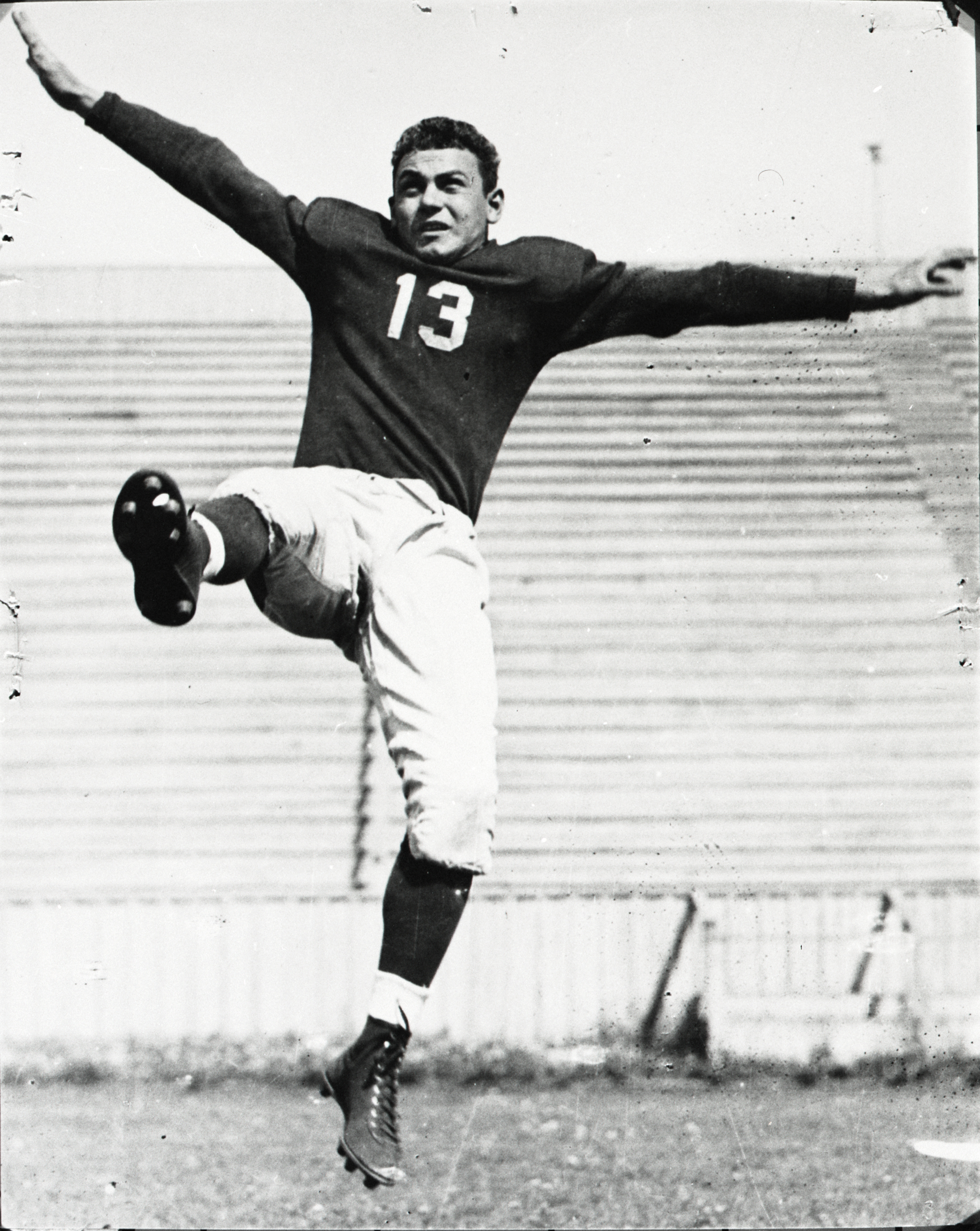 Canadeo led Gonzaga’s offense in the 1940 upset win against the University of Detroit. His nickname was the grey ghost of Gonzaga because his hair was turning grey at the premature age of twenty. Candeo played for Gonzaga from 1938-1040. After he graduated, Candeo was drafted by the Green Bay Packers. He played a multitude of positions including running back, quarterback, defensive back, and punter. Often considered Gonzaga’s best player, Canadeo was inducted into the Football Hall of Fame in 1984. 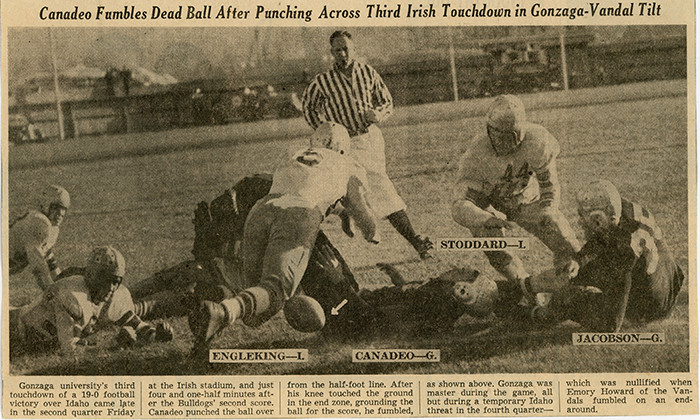 After Canadeo’s knee touched the ground in the end zone for a touchdown, he fumbled the dead ball. Gonzaga, also known as the “Irish”, beat the University of Idaho 19-0.

Eddie Mulholland also known as “the little fellow” or “the curly pated young whirlwind” was a three sport captain at Gonzaga, playing football, basketball, and baseball. He played football at Gonzaga from 1910-1913. Mulholland was a well-rounded man. Not only was he the President of the Gonzaga Athletic Club from 1912-1913, but he had his poetry published in the student literary magazine, and was the president of the band and orchestra as a trombone player. After Mulholland graduated, he studied medicine at Creighton University and became a doctor. He took his skills to Ellis Island in New York, and spent the majority of his career caring for new immigrants. 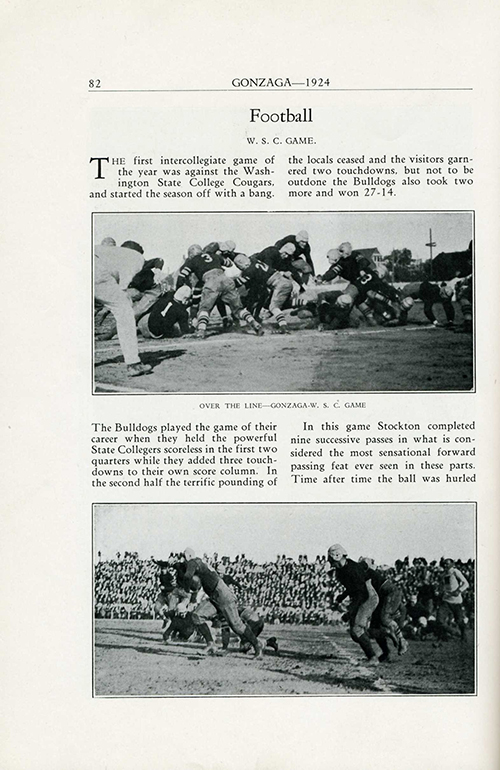 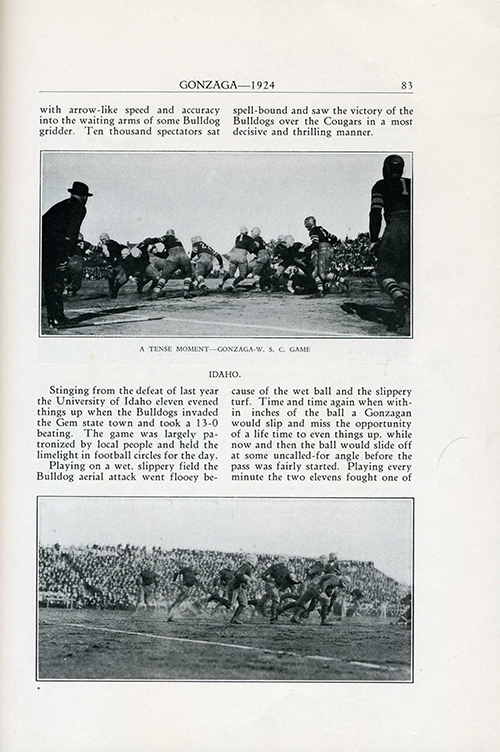 Babe Ruth meeting with Maurice C. Smith during a visit at Gonzaga, 1926 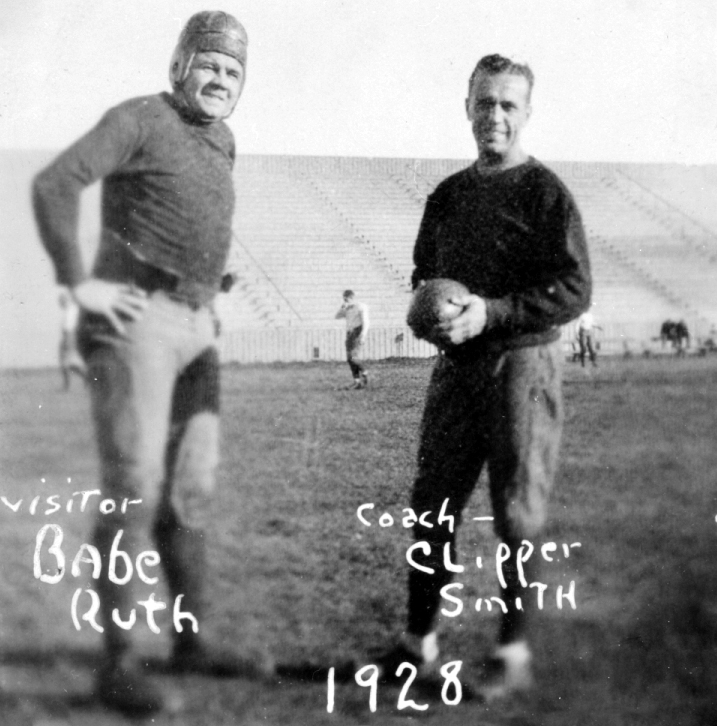 Maurice “Clipper” Smith played for the University of Notre Dame from 1917-1920 and coached Gonzaga’s football team from 1925-1928. He was known for being merciless against Eastern Washington University. His 1925, 1926, and 1927 teams outscored Eastern by a total of 177-0. After Gonzaga, Smith coached at Santa Clara, Villanova, San Francisco, and Lafayette.

On November 16, 1926, home run king George Herman “Babe” Ruth came to campus to meet the Gonzaga football team. Ruth spent the week in Spokane as part of his barnstorming tour. He practiced with the football team, punted balls with them, and signed baseballs. Afterward, Ruth gave a short talk and said that he was unofficially picking Gonzaga to win the Homecoming game on Thanksgiving Day against Washington State College. Unfortunately, WSC beat Gonzaga 7-0 with a crowd of over 10,000 in attendance.

Coach Clipper Smith chose players for the 1925 season behind locked gates to keep his decisions secret.

A Spokane native and Gonzaga football alum, Pecarovich was the head coach from 1931-1938. Pecarovich was a close friend and classmate of Bing Crosby. When Crosby made a name for himself in Hollywood, he invited Pecarovich to star in movies with him. Pecarovich returned the favor and appointed Crosby to assistant football coach. Pecarovich held a 31–35–5 record during his time at Gonzaga.