Undefeated since 1941: A History of Gonzaga Football: Case 6: The Fans 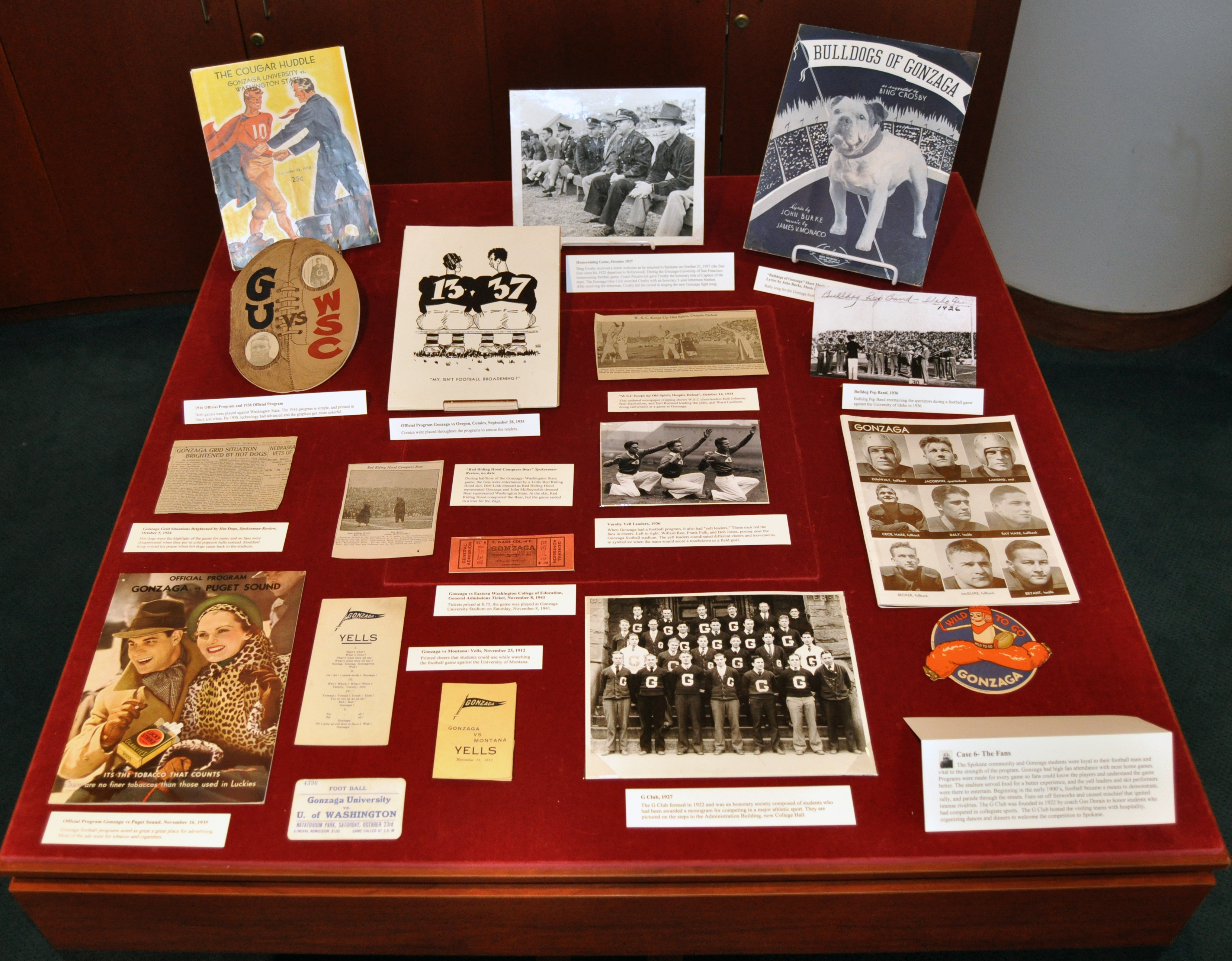 The Spokane community's loyalty to the football team was vital to the strength of the program. Gonzaga enjoyed playing to a sold-out crowd at home games. Programs were made for every game so that fans could know the players and understand the game better. The stadium served food for a better fan experience, and the yell leaders and skit performers were there to entertain. Beginning in the early 1900s, football became a means to demonstrate, rally, and parade through the streets. Fans set off fireworks and caused mischief that ignited intense rivalries. The G Club was founded in 1922 by coach Gus Dorais to honor students who had competed in collegiate sports.  The G Club hosted the visiting teams with hospitality, organizing dances and dinners to welcome the competition to Spokane. 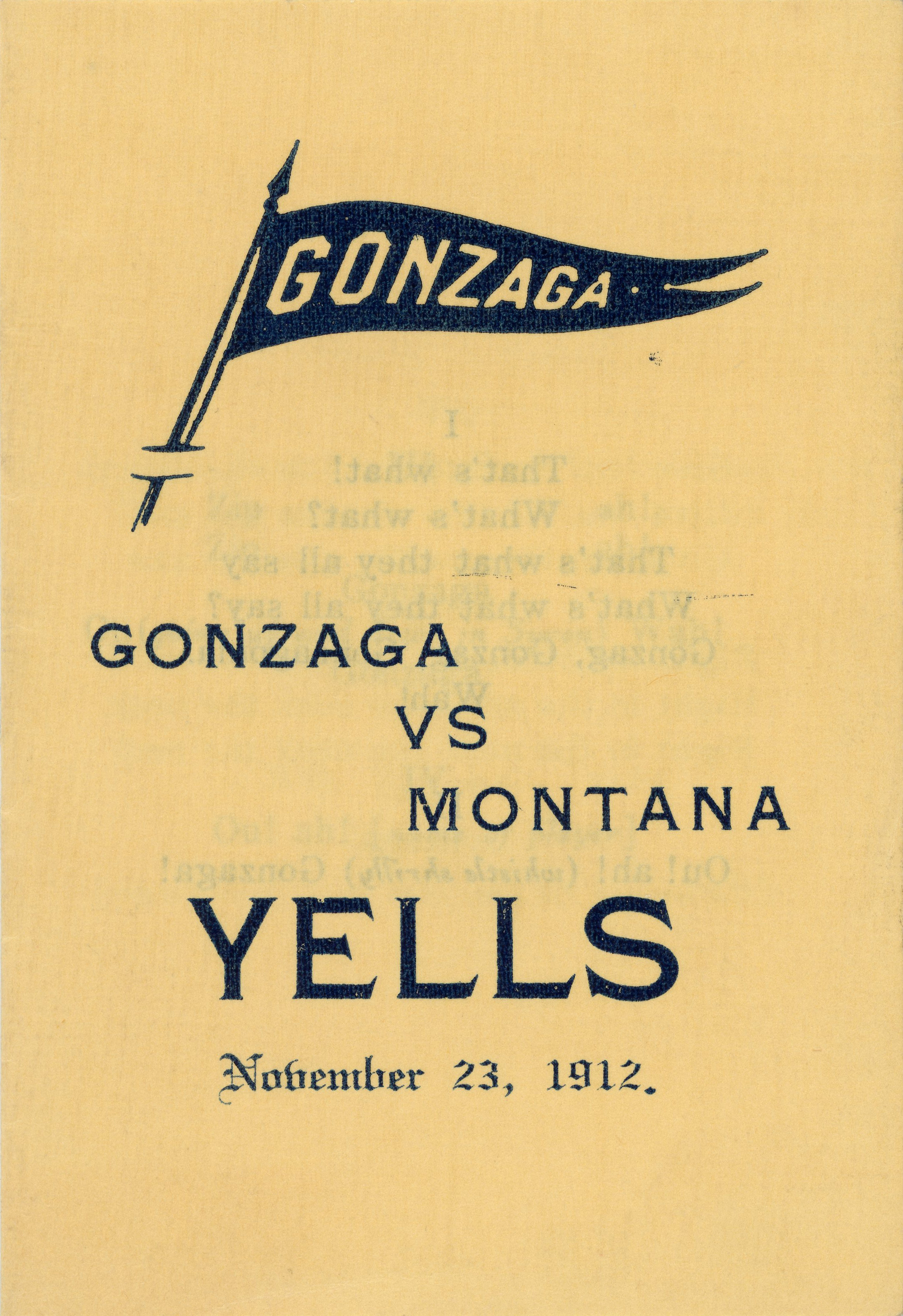 Printed cheers that students could yell while watching the football game against the University of Montana.

Tickets priced at $.75. The game was played at Gonzaga University Stadium on Saturday, November 8, 1941. 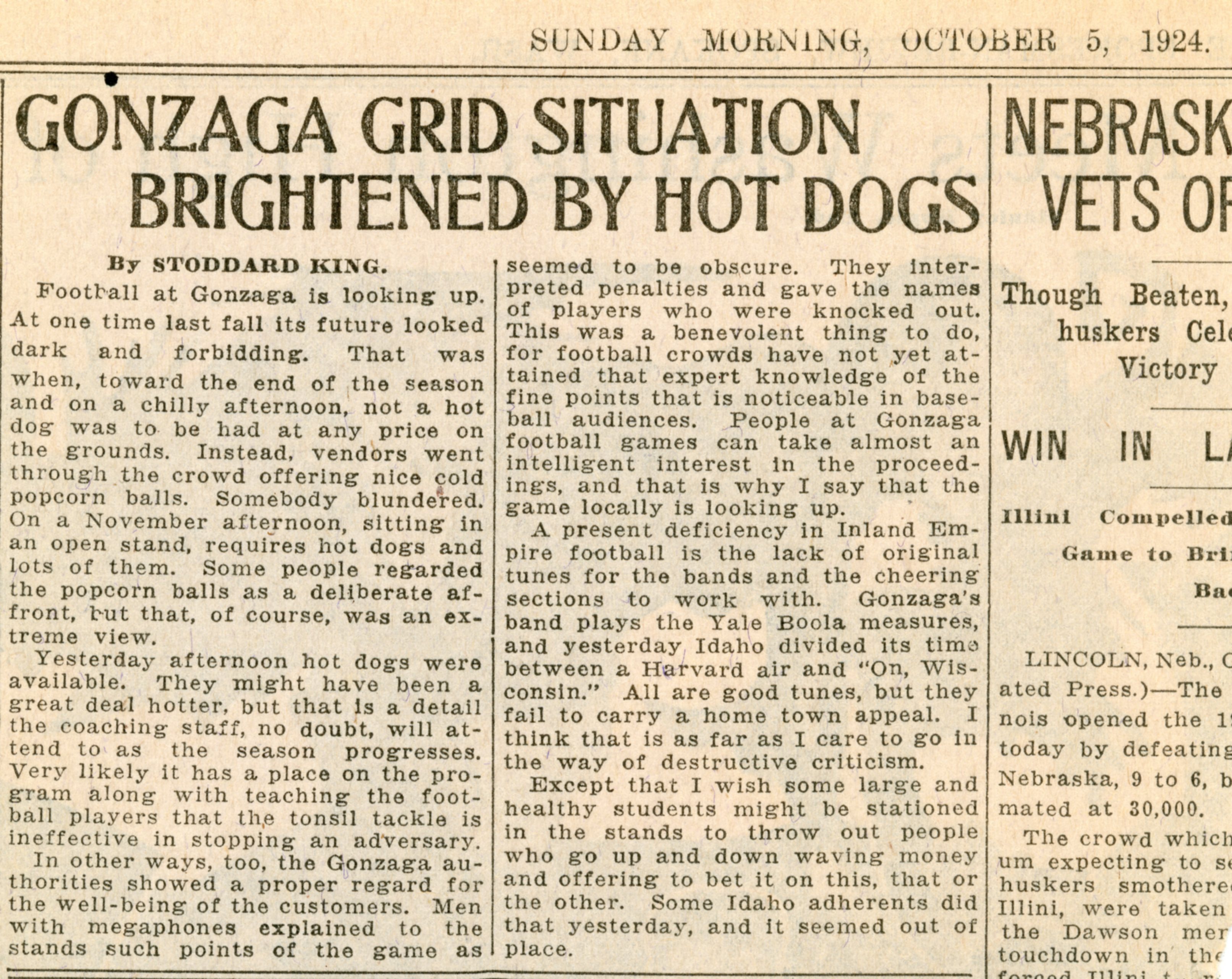 Hot dogs were the highlight of the game for many and so fans were disappointed when the University sold in cold popcorn balls instead. Stoddard King voiced his praise when hot dogs returned to the stadium menu. 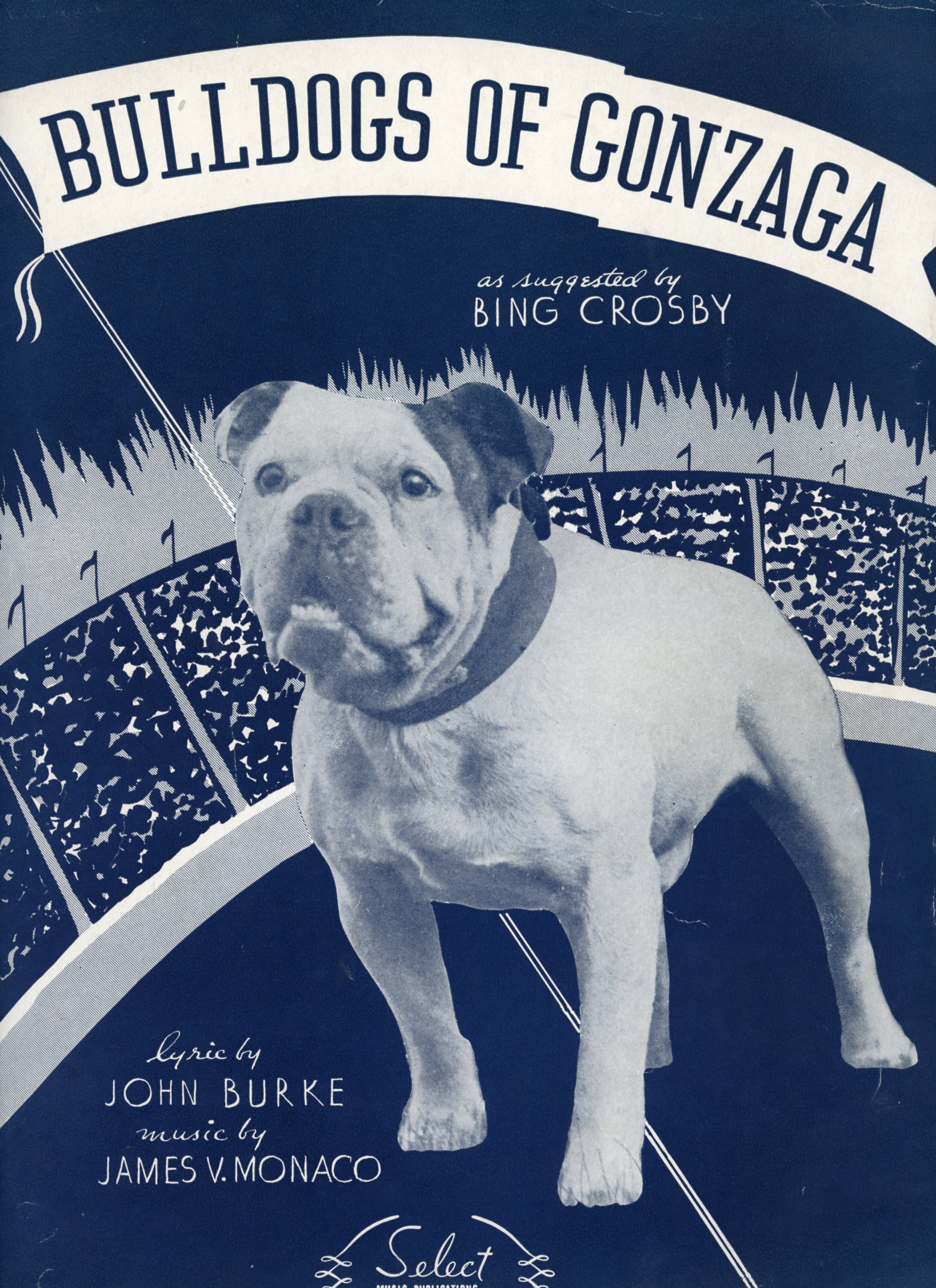 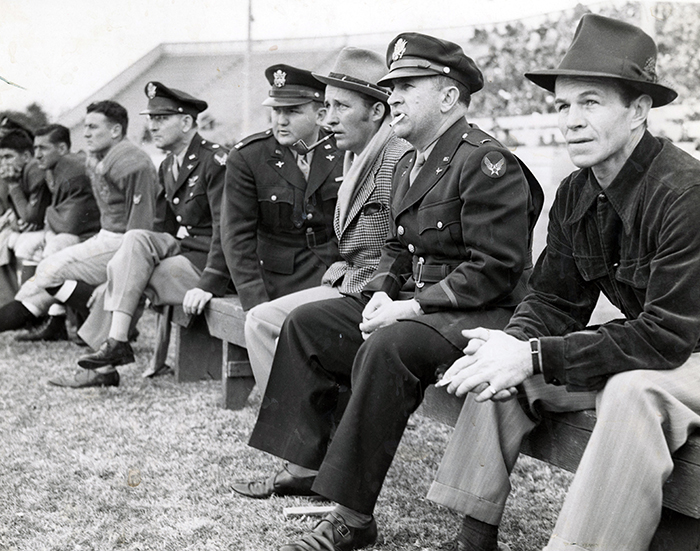 Bing Crosby received a warm welcome as he returned to Spokane on October 21, 1937 (the first time since his 1925 departure to Hollywood). During the Gonzaga-University of San Francisco homecoming football game, Coach Pecarovich gave Crosby the honorary title of Captain of the team. The Gonzaga Glee Club awarded Crosby with an honorary 3-year letterman blanket. After receiving the blanket, Crosby led the crowd in singing the new Gonzaga fight song. 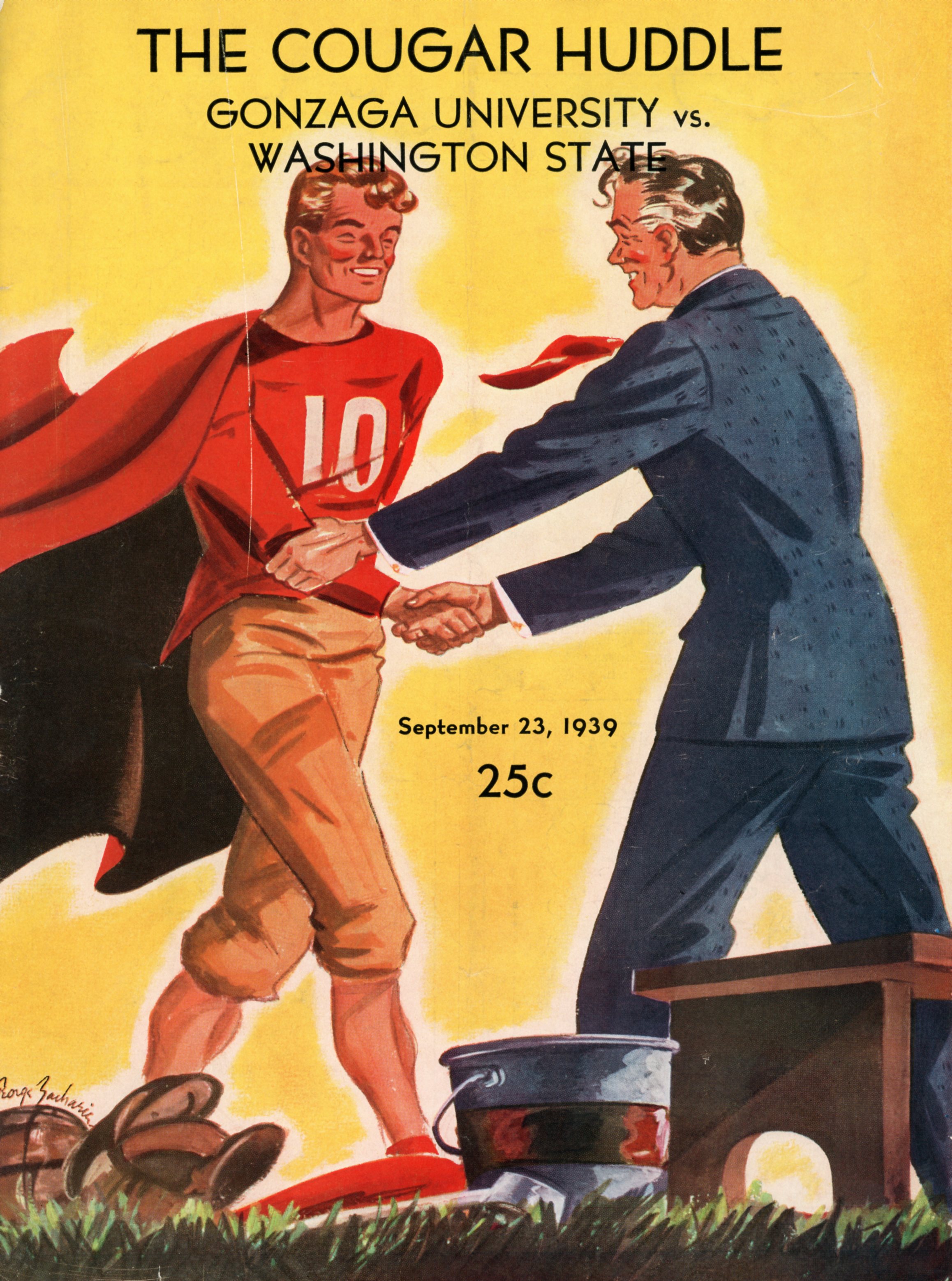 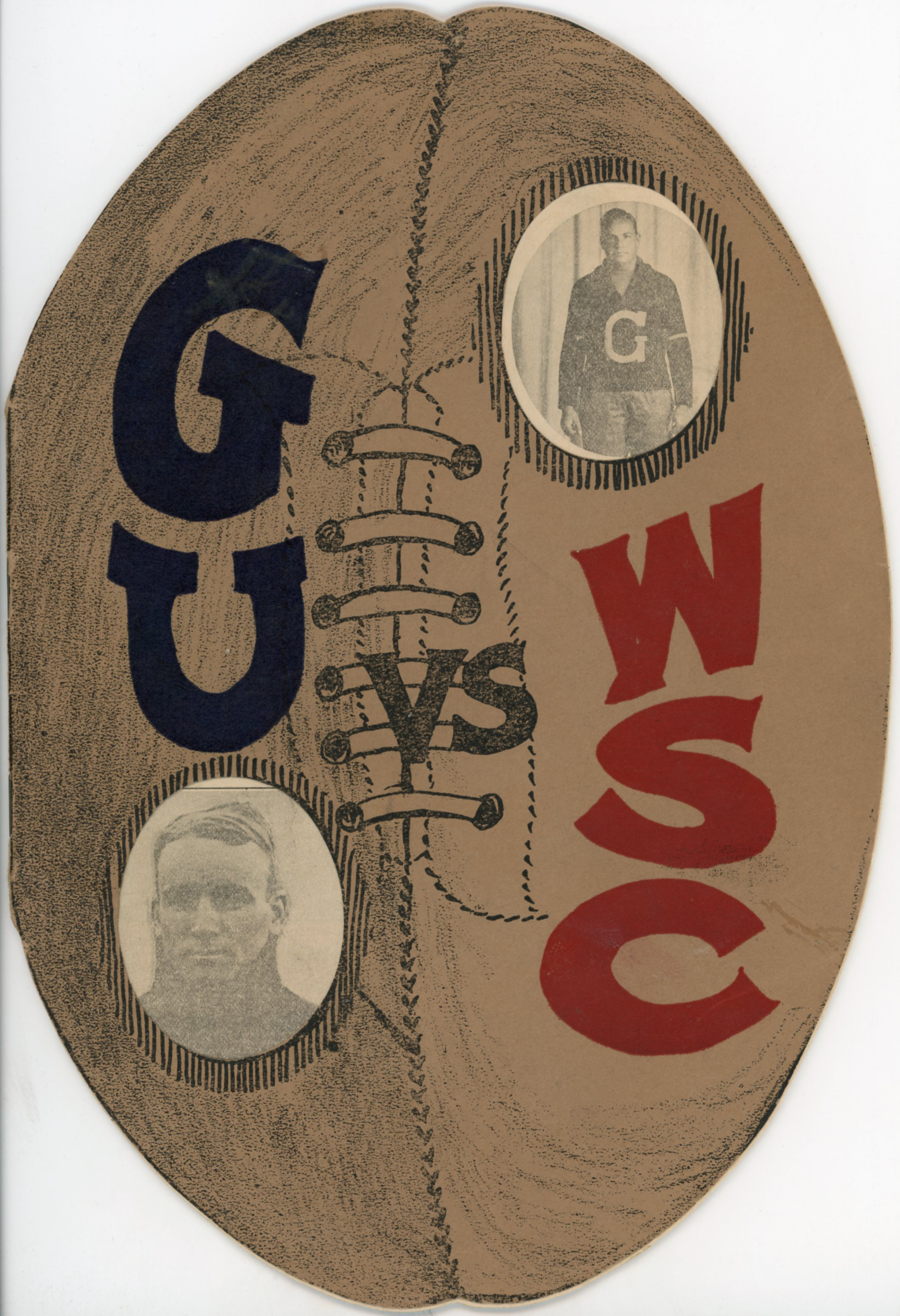 Both games were played against Washington State. The 1916 program is simple, and printed in black and white. By 1938, technology had advanced and the graphics got more colorful. 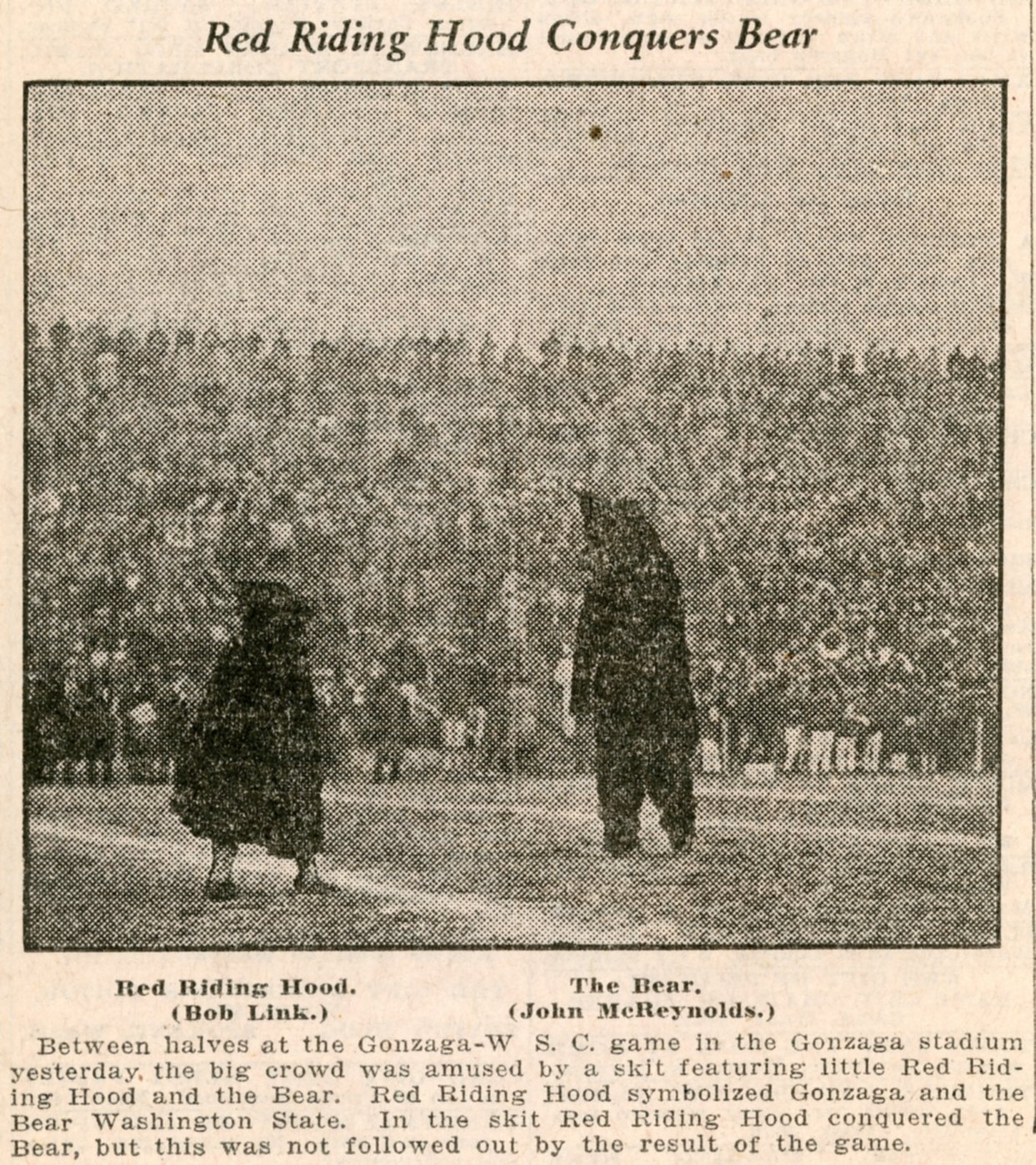 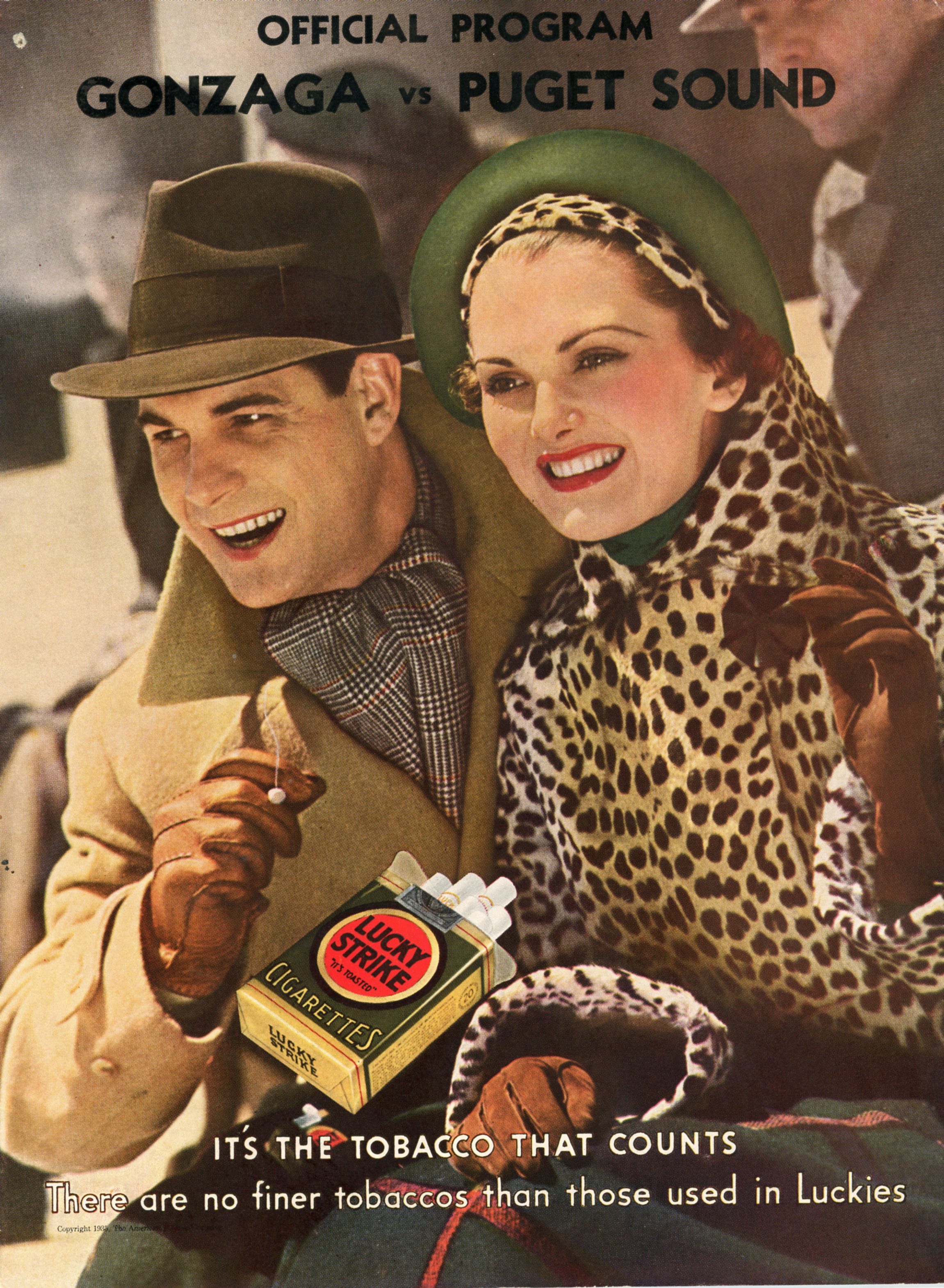 Gonzaga football programs acted as great place for advertising. Most of the ads were for tobacco and cigarettes. 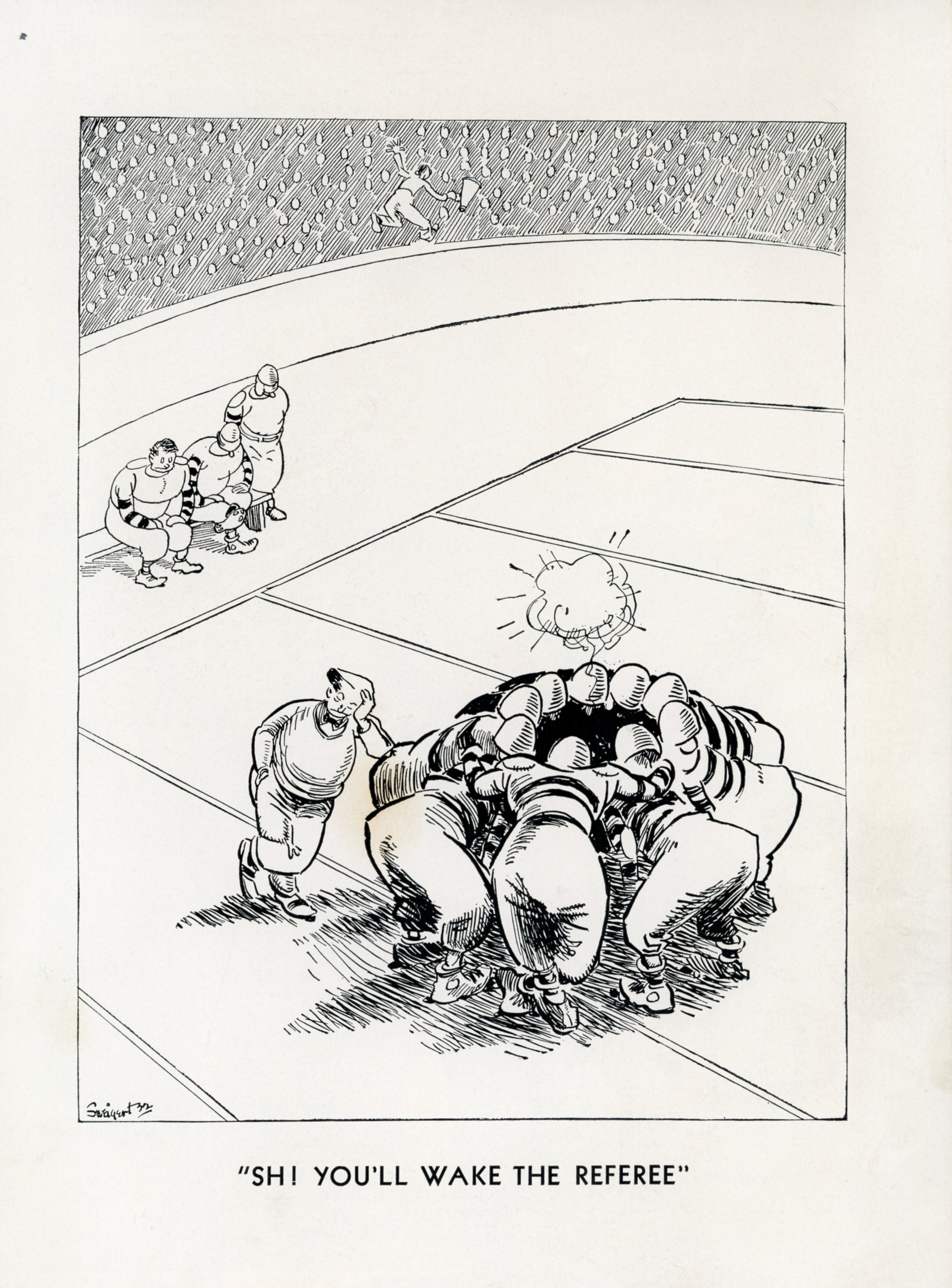 Comics were placed throughout the programs to amuse the readers. 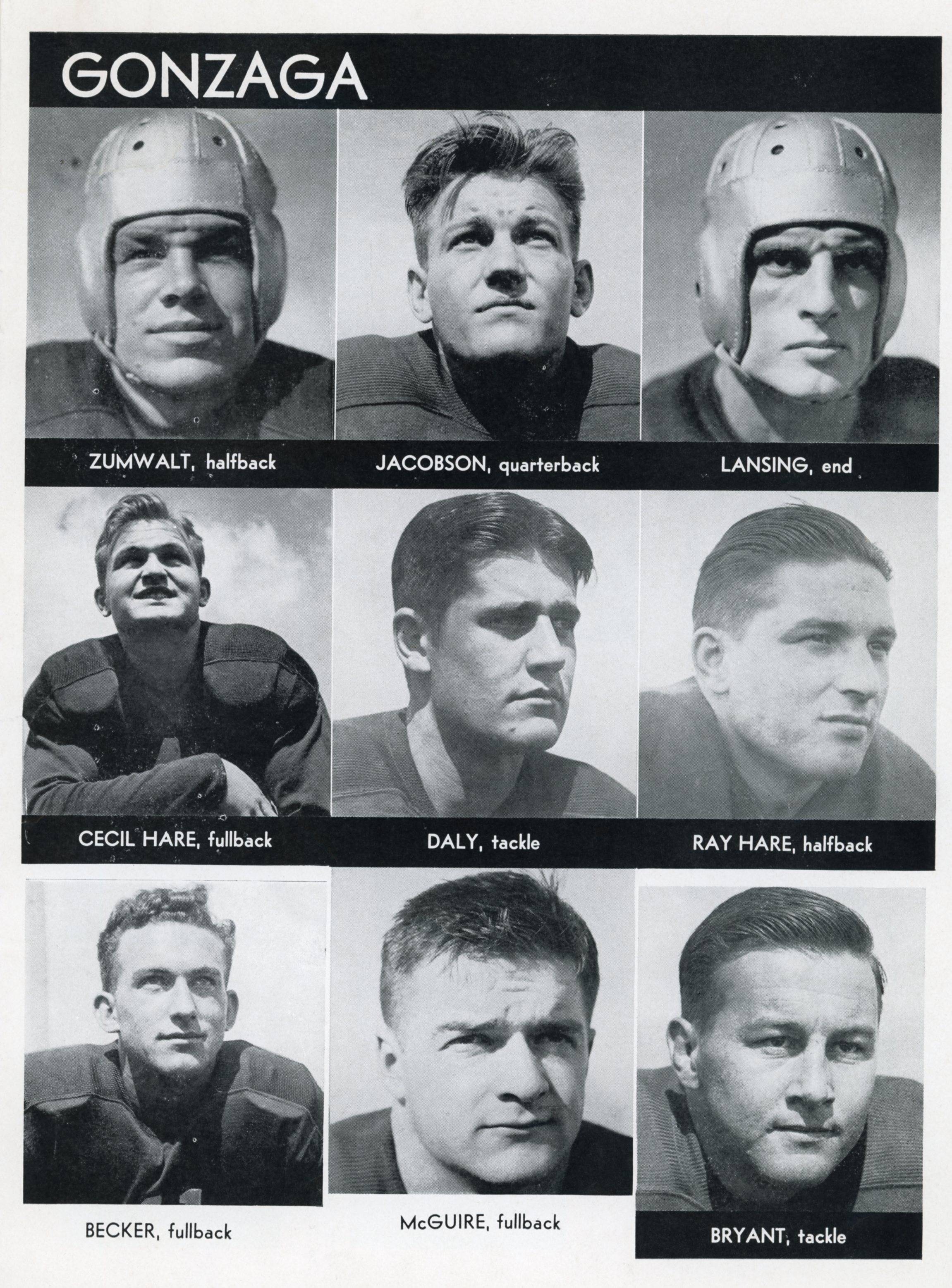 Photos of players to assist fans in knowing who was on the field. 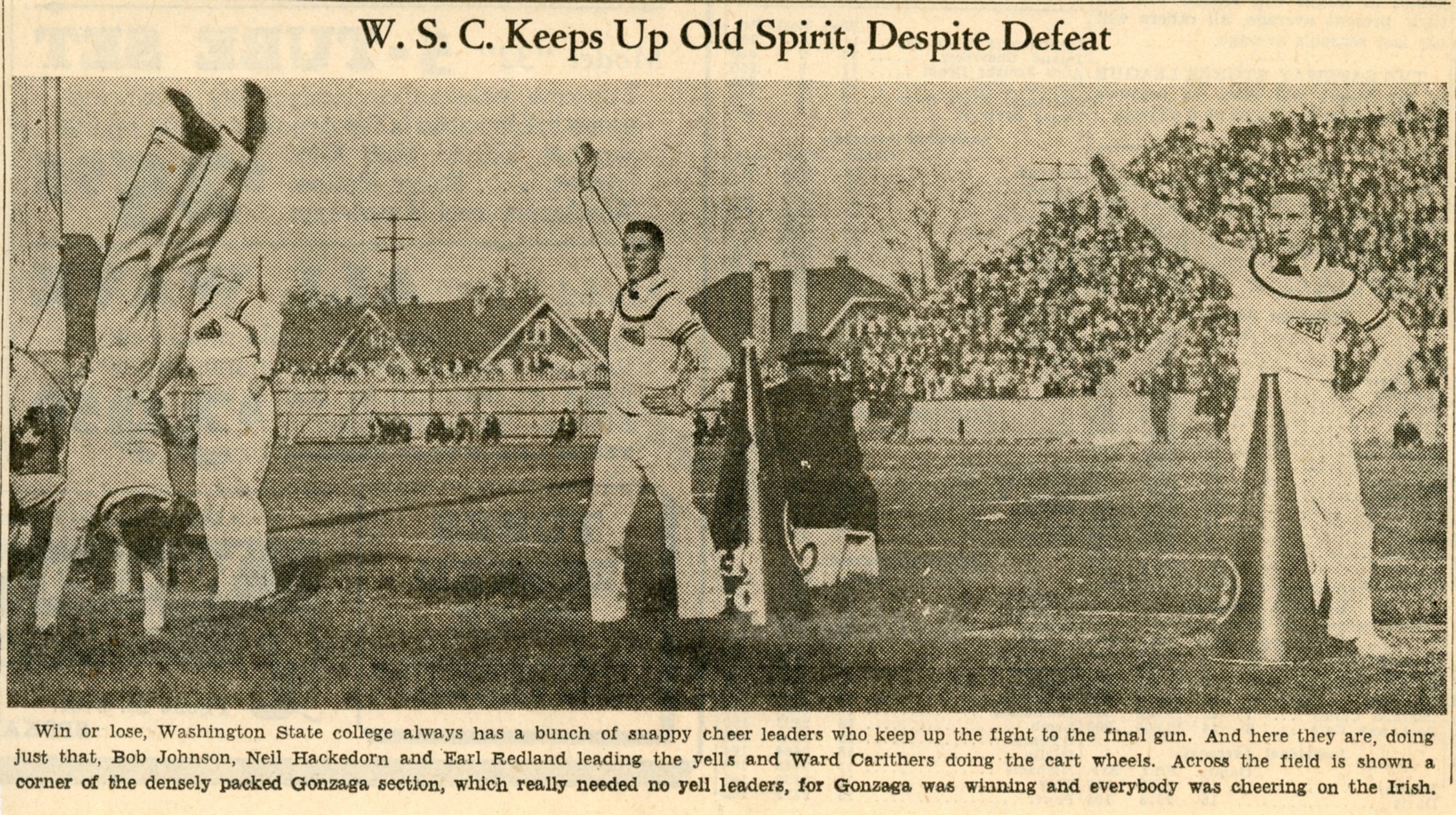 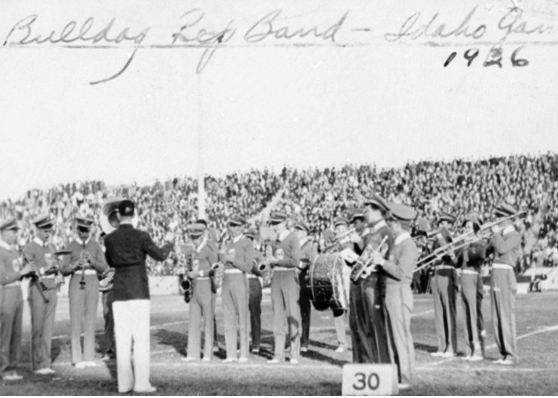 The Bulldog Pep Band entertaining the spectators during a football game against the University of Idaho in 1936. 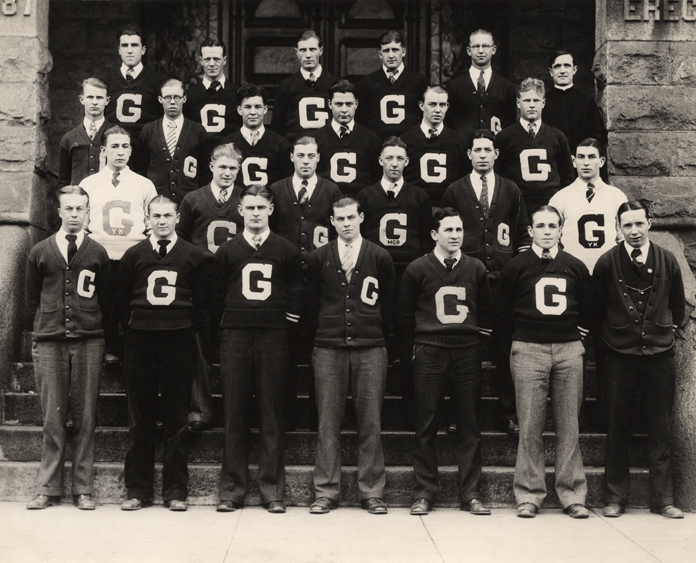 The G Club was an honorary society composed of male students who had been awarded a monogram for competing in a major athletic sport. They are pictured on the steps of College Hall. 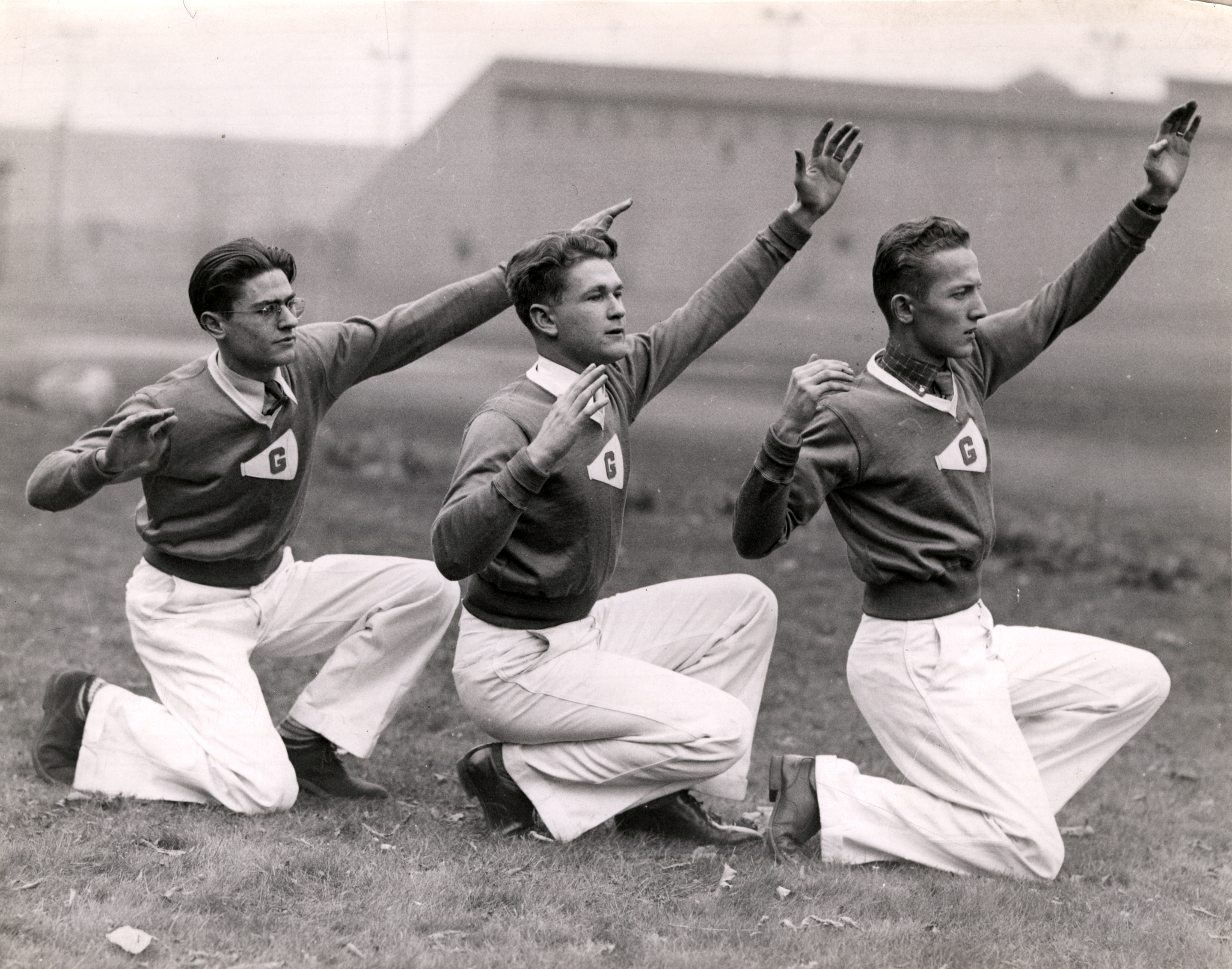 When Gonzaga had a football program, it also had "yell leaders." These men led the fans in cheers. Left to right: Willard Roe, Frank Falk, and Bob Jones, posing near the Gonzaga football stadium. The yell leaders coordinated different cheers and movements to symbolize the team scoring a touchdown or a field goal.