Undefeated since 1941: A History of Gonzaga Football: Case 4: Gonzaga Stadium 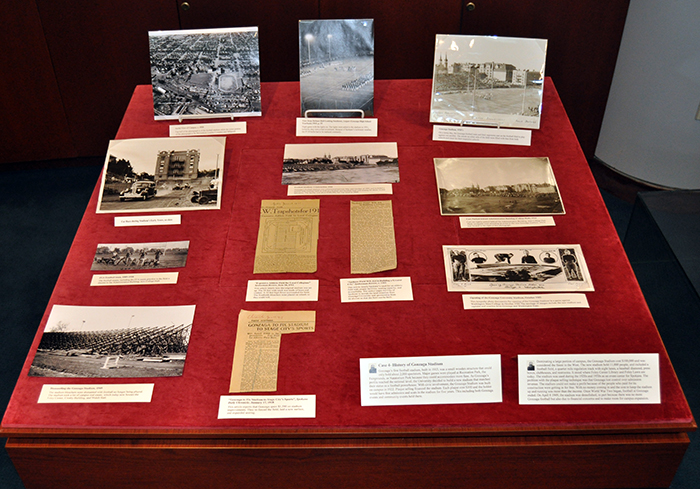 Gonzaga’s first football stadium, built in 1913, was a small wooden structure that could only hold about 2,000 spectators. Major games were played at Recreation Park, the Fairgrounds, or Natatorium Park because those venues were able to accommodate more fans. As Gonzaga’s profile reached the national level, the University decided to build a new stadium that matched their status as a football powerhouse. With civic involvement, the Gonzaga Stadium was built on campus in 1922. The selling of plaques financed the stadium. Each plaque cost $100 and if purchased, the buyer would have free admission and seats in the stadium for five years. This included both Gonzaga events and community events held at the stadium.

Dominating a large portion of campus, the Gonzaga Stadium cost $100,000 and was considered the finest in the West. The new stadium held 11,000 people and included a football field, a quarter-mile regulation track with eight lanes, a baseball diamond, press boxes, clubhouses, and restrooms. It stood where Foley Center Library and Foley Lawn are today. The stadium was put to use throughout the 1920s and 1930s as an event center for Spokane. The problem with the plaque selling technique was that Gonzaga lost control over admission to the stadium. The stadium could not make a profit because the hundreds of people who paid for its construction were getting in for free. There was no money coming in and the cost to keep the stadium up and running was more than the income. Once World War Two began, football at Gonzaga ended. On April 8 1949, the stadium was demolished, in part because there was no more Gonzaga football, but also due to financial concerns and to make room for campus expansion. 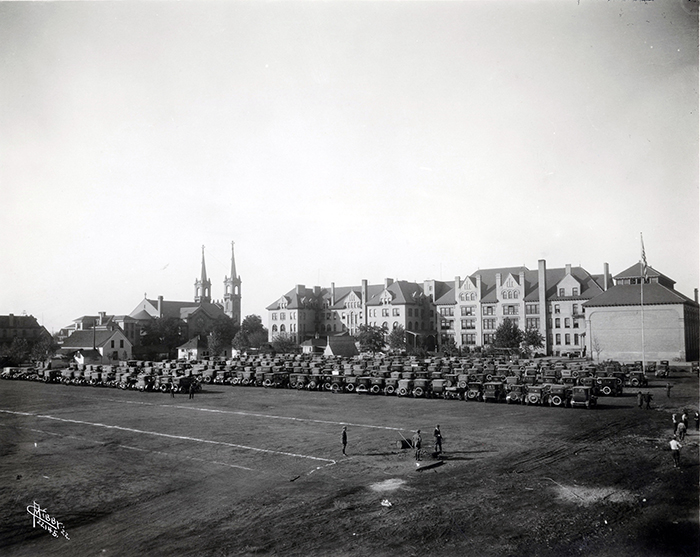 Cars are tightly parked behind the Administration Building, now College Hall. Their occupants were attending an event in the new Gonzaga Stadium, which was located to the right of this photograph. 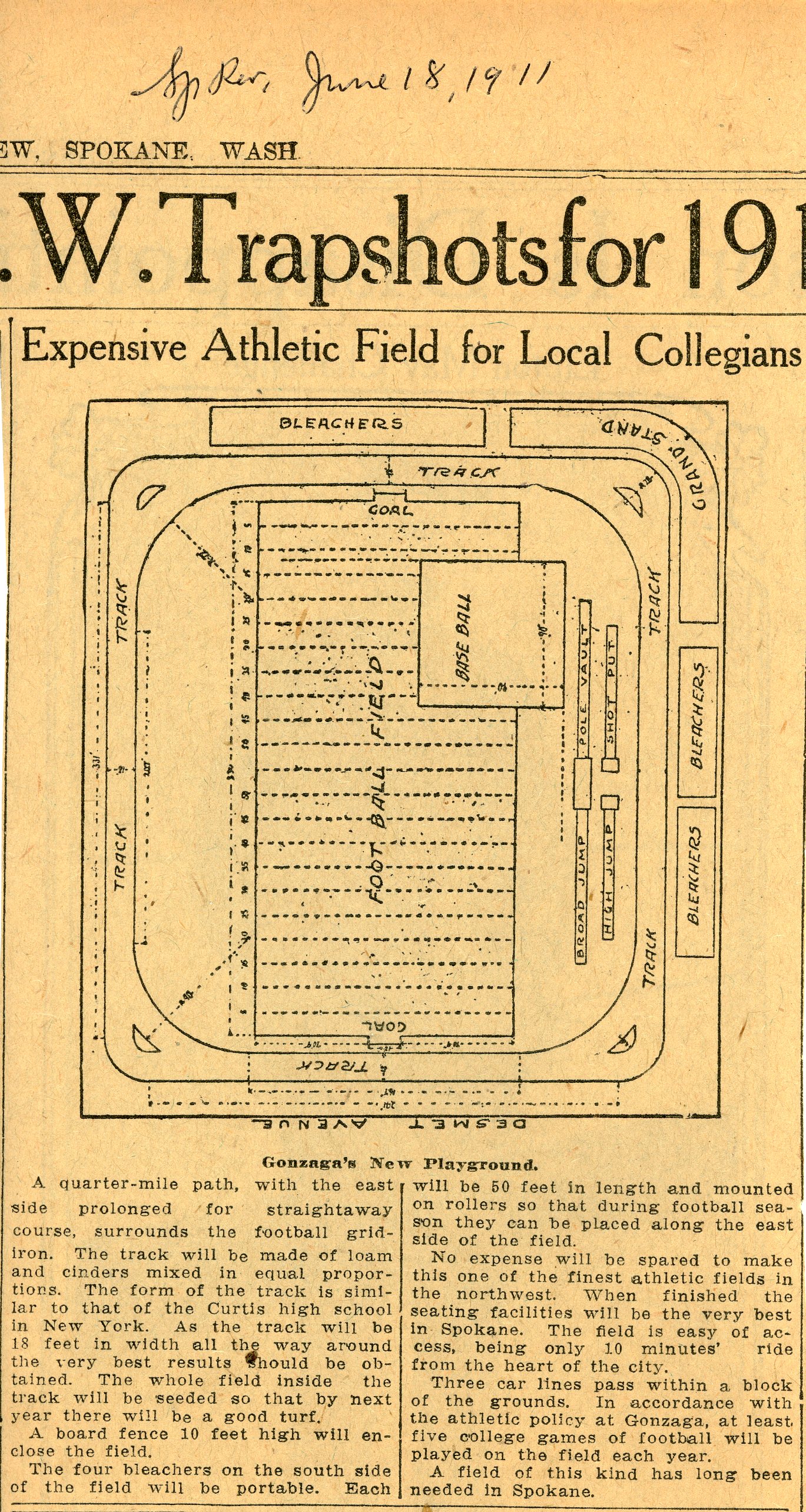 This article details how the original stadium was set up. The 18 feet wide track was made of loam and cinders. A 10 feet high fence surrounded the field. The Southside bleachers were placed on wheels so they could roll.

The football teams, including the JYA teams, practice in the field adjacent to the Administration Building, now College Hall. 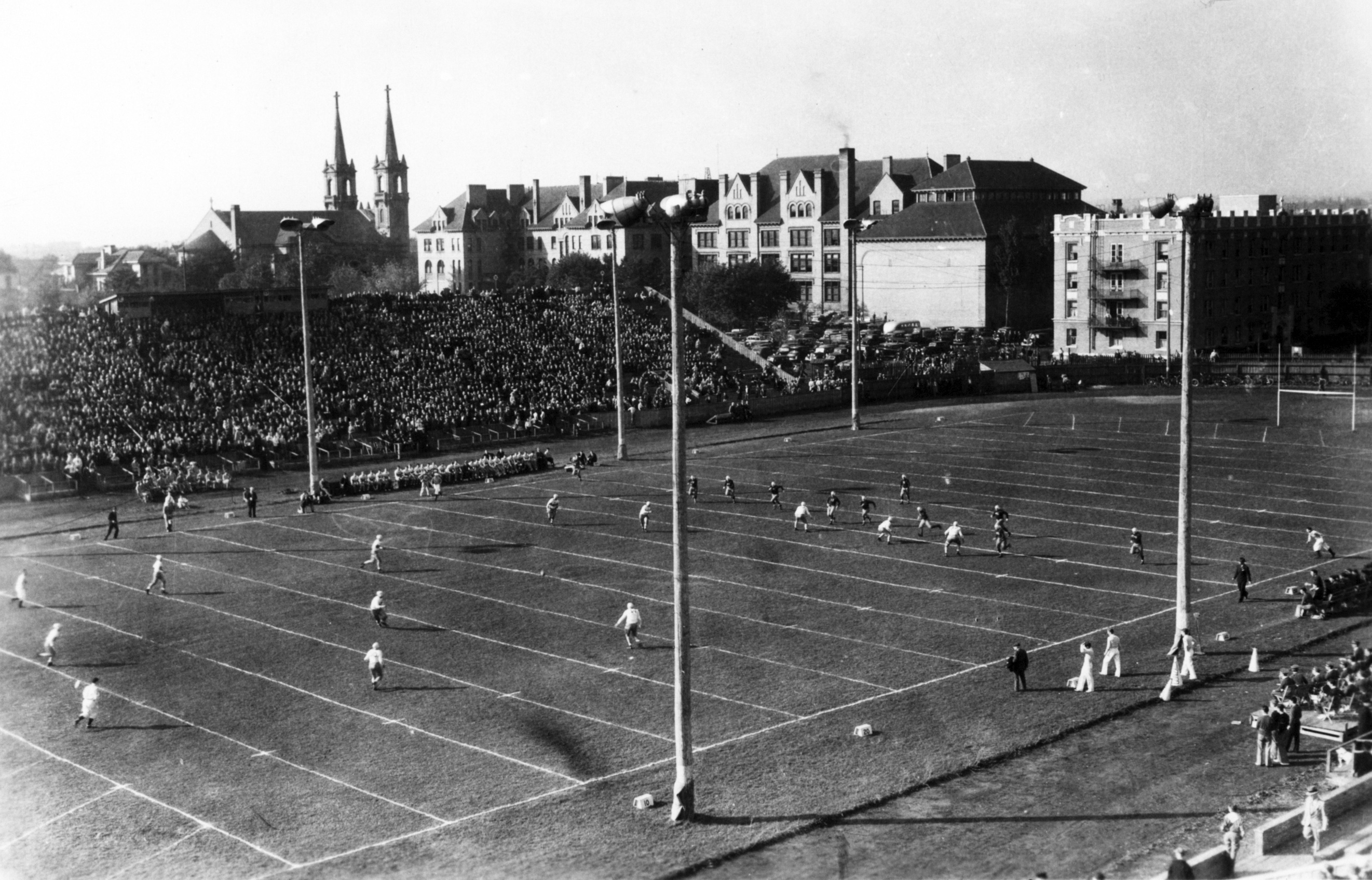 On a sunny day, the Gonzaga football team and their opponents met on the football field to play against one another. The stands on either side of the field were filled with cheering fans from both schools. 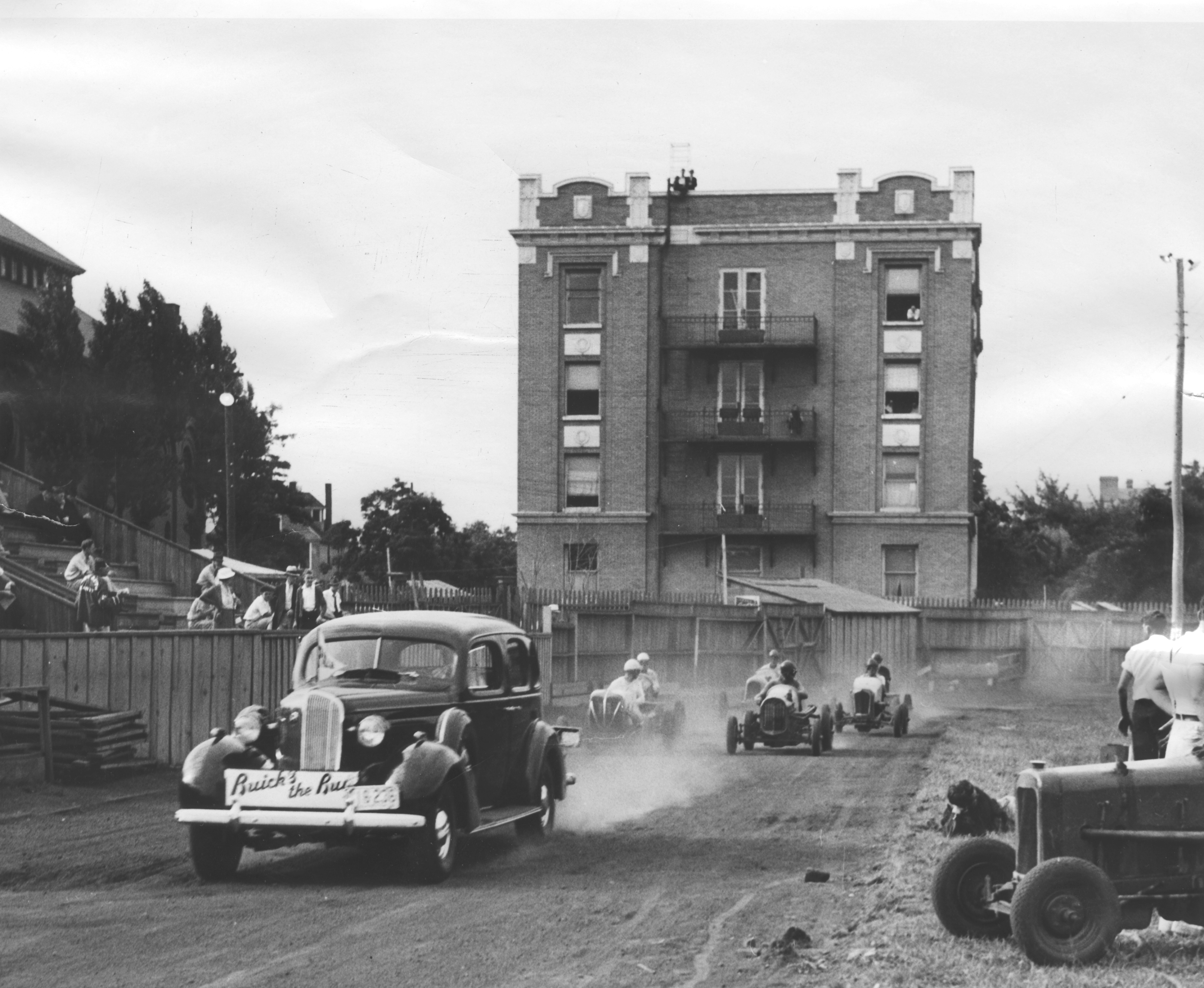 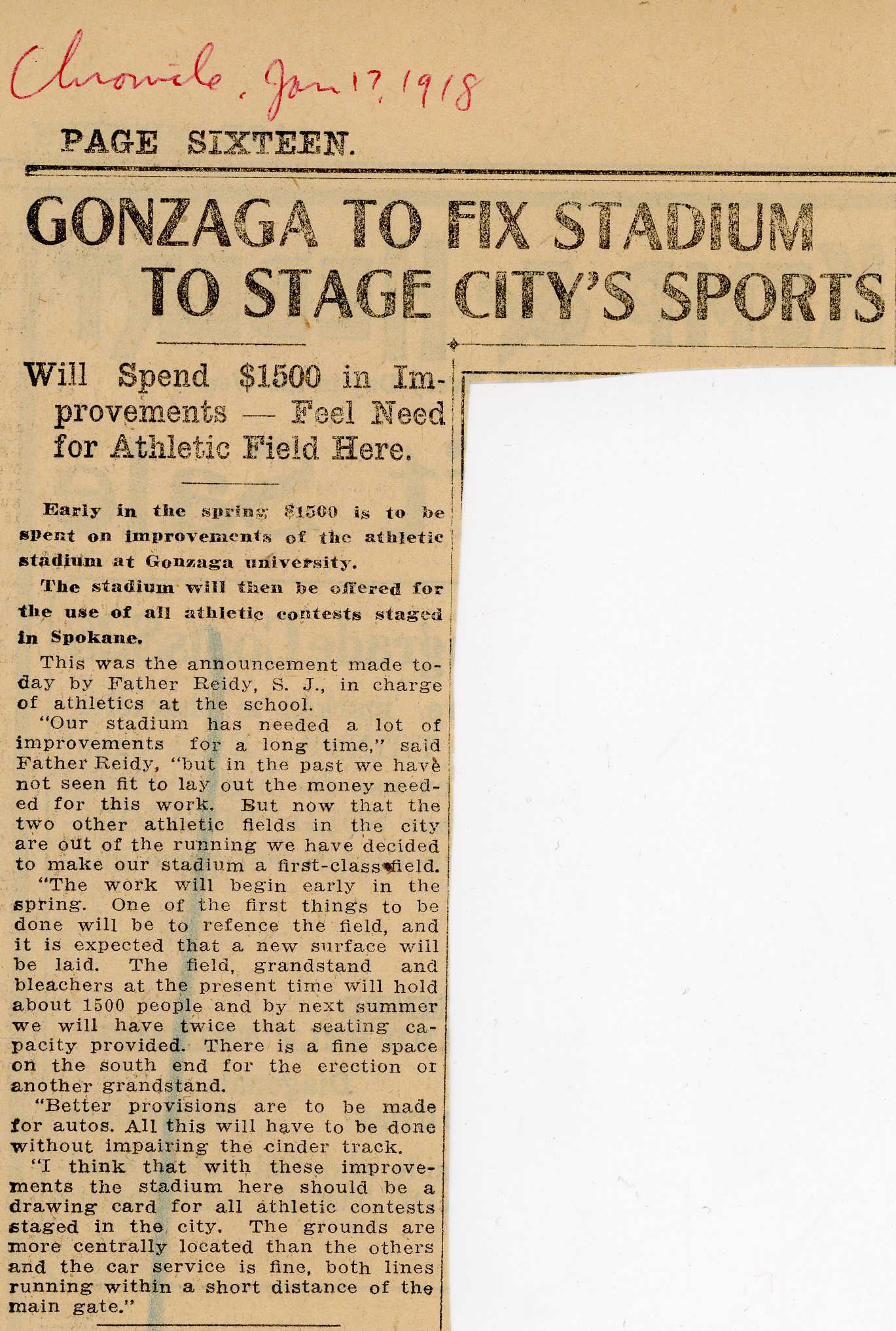 This article reports that Gonzaga spent $1,500 on stadium improvements. They re-fenced the field, laid a new surface, and expanded seating. 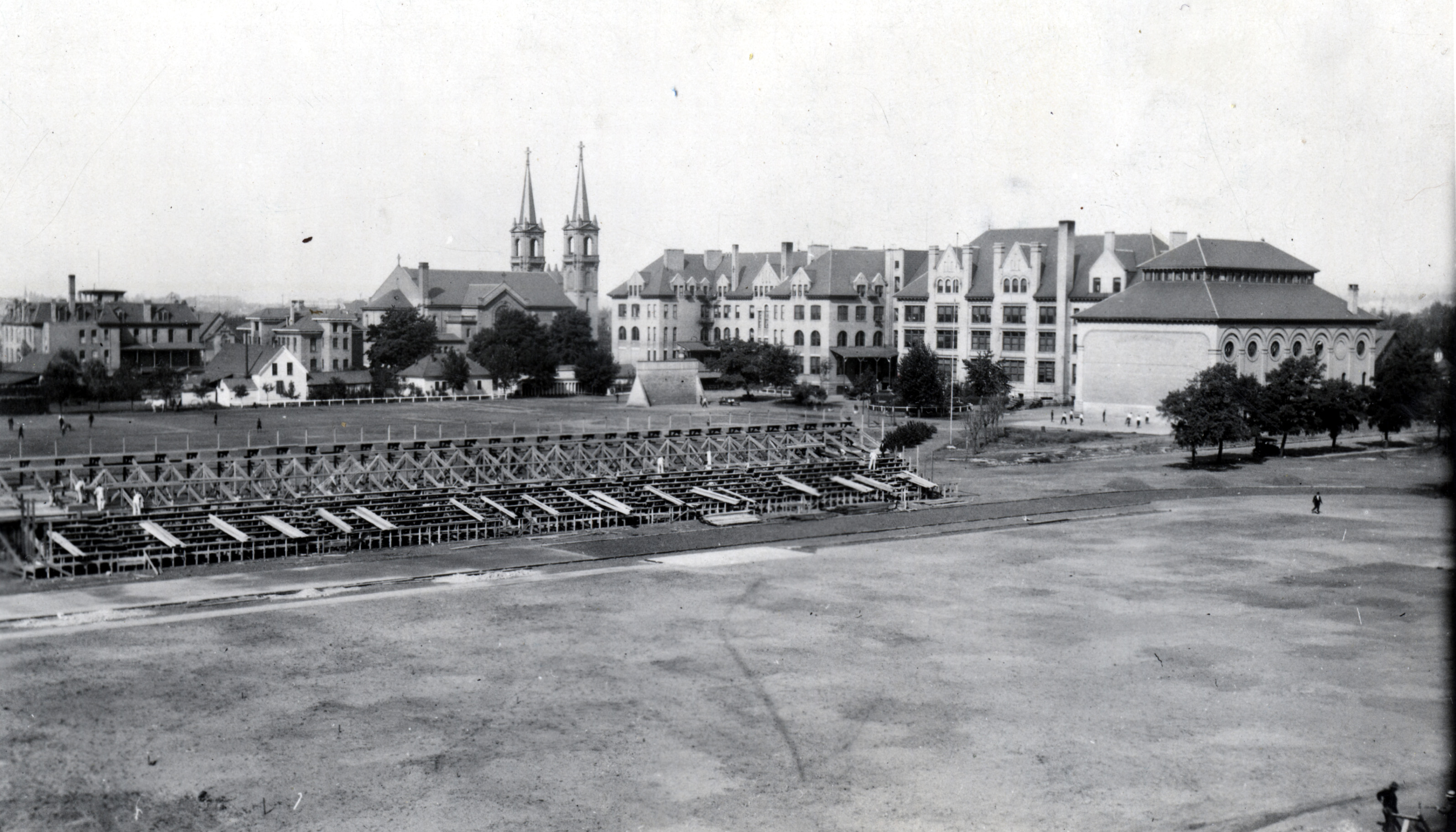 Gonzaga's football stadium was constructed between May and October of 1922 and included a quarter-mile running track as well as a football and baseball field with seating for about 10,400 spectators. It was razed in 1949.

This article details Spokane’s need for an athletic field with proper facilities, seating capacity, and accessibility. The author urges the City of Spokane to accept the land donation from Gonzaga University and sponsorship from its alumni so that the field can be built. 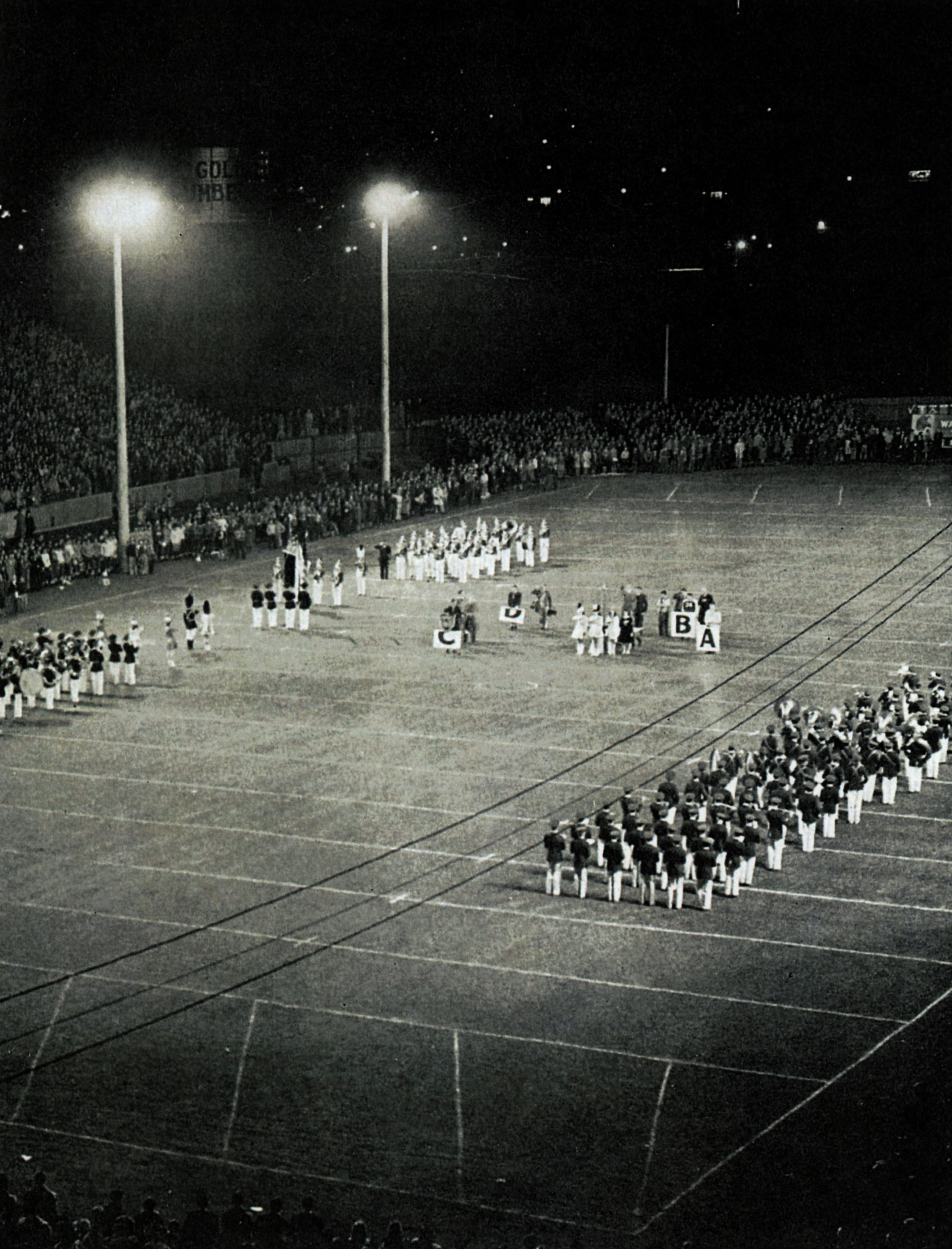 Night game with the lights on. The lights were added to the stadium in 1931, however, they were a bad investment. Because of Spokane’s inclement weather, the $7.50 bulbs had to be replaced constantly. 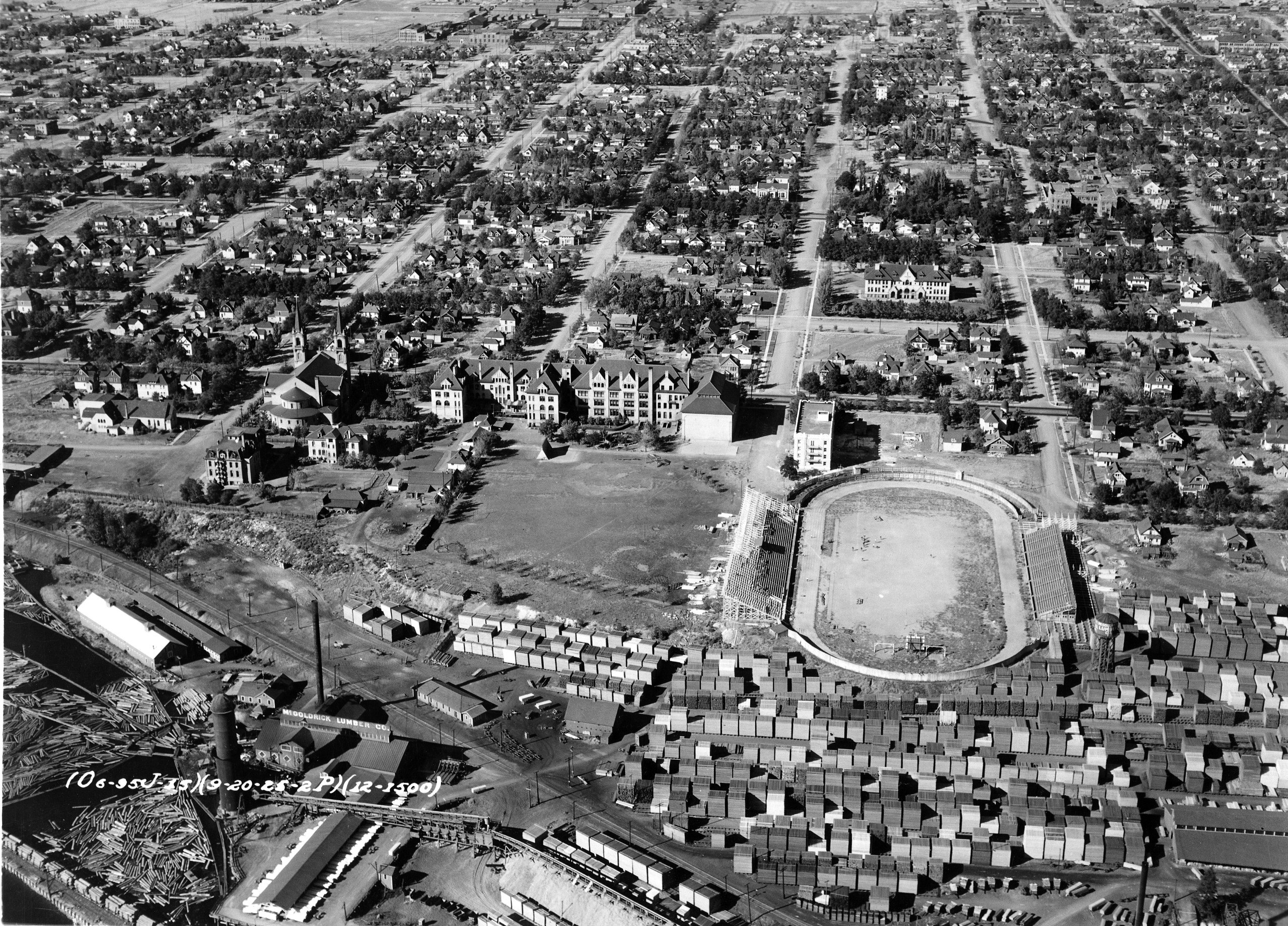 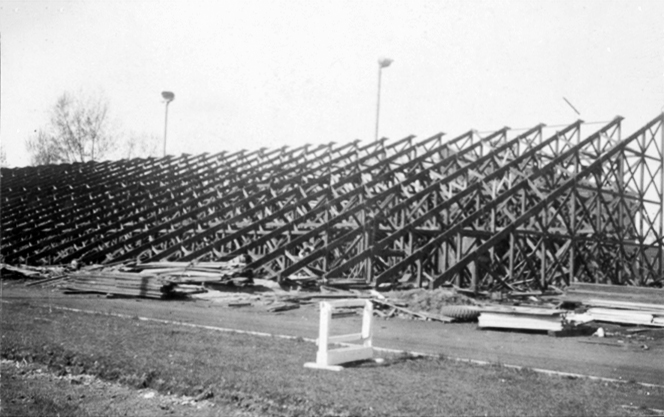 With football no longer being played, the stadium bleachers were dismantled. The stadium occupied a large portion of campus real estate, which today houses the Foley Center, Crosby Building, and Welch Hall.

This keepsake photo documents the opening of the Gonzaga Stadium in a game against Washington State College in October 1922. The montage of images includes the new stadium and captains and coaches from Gonzaga and Washington State.