This 1961 facsimile reproduces in original size the Gutenberg Bible first printed in the early 1450s. Johannes Gutenberg produced around two hundred copies—a feat unthinkable in an age when copying a single manuscript by hand could take years. His book of choice, a full copy of Jerome’s Latin Vulgate, was the quintessential medieval book. Any other work might only catch a niche audience, but the standardized Bible translation of western Europe guaranteed a mass audience to jumpstart the new technology.

Even as a facsimile, these pages manifest why many admirers consider the Gutenberg Bible to be the most beautiful book ever printed. Gutenberg left spaces blank for illuminated initials for the booksellers or wealthy customers to fill themselves. The book’s enormous margins intentionally invited further illuminated designs. Gutenberg designed his Bible in every way like a medieval text, oblivious to how subsequent centuries of print would transform (and perhaps deface) the presentation of books. 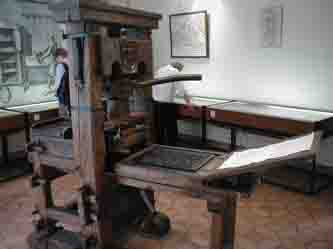 The first books printed with metal movable type were made in Korea over a century before Gutenberg was born. Yet Gutenberg’s invention of combining a screw press (previously used on grapes and olives) with movable type streamlined the process and conquered Europe’s ripe markets. It is for this reason that Gutenberg’s invention transformed history, turning an ancient artisan craft into the world’s first proto-industrial capitalist venture.

What is a “facsimile”? – From Latin words “to make similar,” a facsimile is a modern reproduction of an older book. Rare book collectors are sensitive to books that imitate the more-valuable original. A forgery happens when the imitation is deceitful, but a facsimile is an imitation that does not pretend to be an original.

What kinds of people became printers? – Gutenberg himself was a goldsmith and used his familiarity with metals to invent “type metal” (an alloy of lead, tin and antimony still used for modern printing). Other goldsmiths followed Gutenberg to become printers, but so did members of other industries, like engravers familiar with woodblock printing and university students familiar with books. Take heed that in this period, a degree in the liberal arts gave you unique hard skills for a cutting-edge and lucrative sector of business.

What kinds of people bought books like the Gutenberg Bible? – The Latin text precluded Gutenberg from reaching a lay audience. His customers thus included university students, priests, and wealthy townsmen educated in Latin. Prices must have varied considerably due to the flexibility in how much illumination customers could add: a thoroughly-illuminated piece sold for far more than a blank Vulgate hot off the press.

Where’s the real deal? – Of the 180 copies of the original Gutenberg Bible, only around 48 are still in existence, housed in various institutions in America and Europe. The last Gutenberg Bible sold in auction for $5.39 million in 1987.