This is the oldest book in UASC: the Bruno Psalter of 1475. Rare book collectors call works printed before 1500 incunabula, from the Latin word for “cradle” (for the “cradles” or origins of printing). They are particularly prized for their exotic features of medieval scribal practice which quickly disappeared after the fifteenth century, such as the use of “rubrication” or red ink for titles and paragraph signs (whence our word “rubric”).

In the fifteenth century, paper was expensive. This bookmaker solved the problem of needing paper to secure the front board by cannibalizing an illuminated manuscript from one or two centuries earlier. Scholars call these papers “paste-downs,” and they were quite common in this century. What was once an ornate antiphonary had become, due to the advent of print, no more than packaging material. 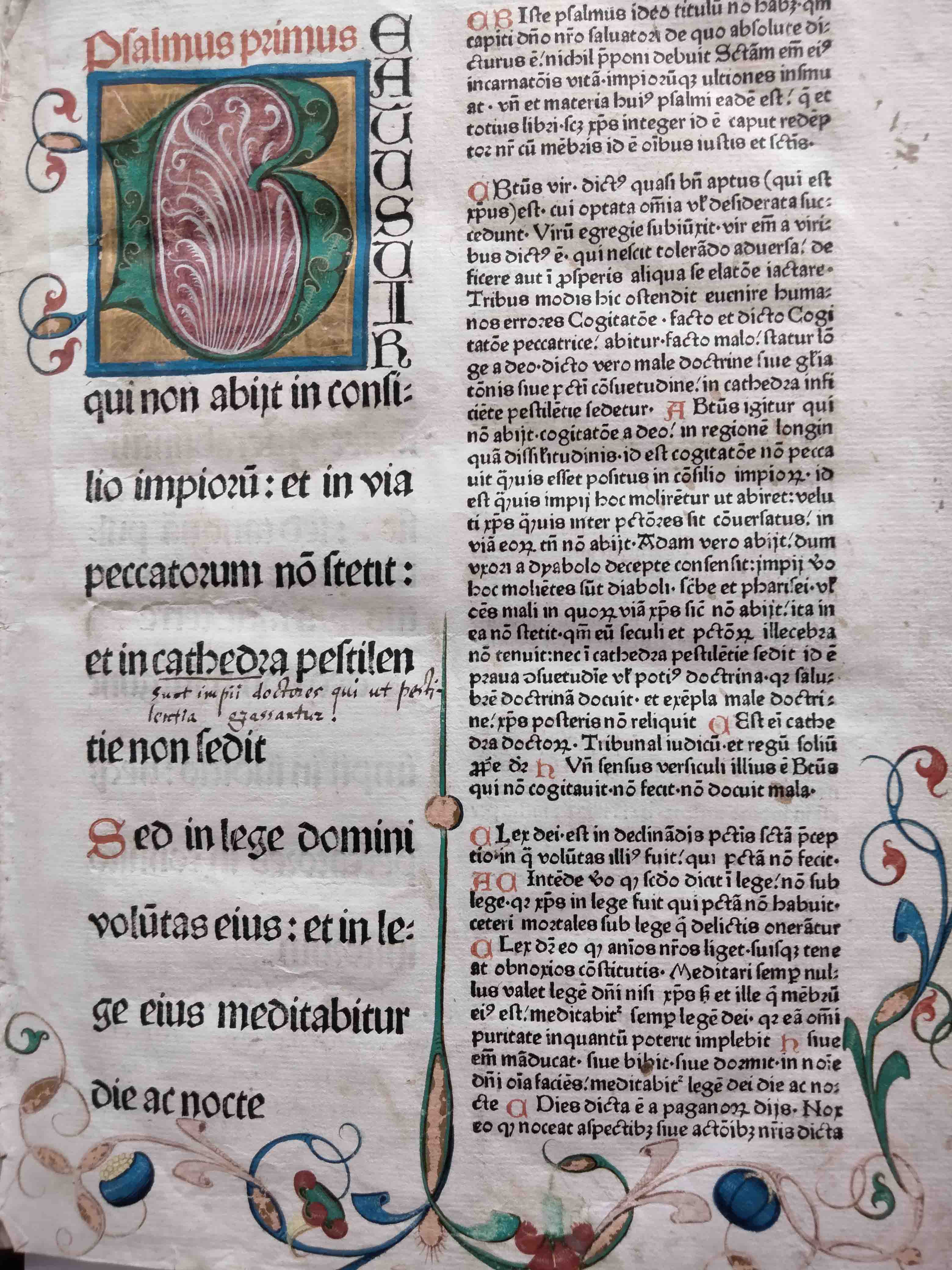 This page has more illumination than any other individual page in UASC. It marks the first psalm—the illustrated title page would not come about until the next century, and so artistic attention belonged to any page of great significance in keeping with medieval tradition. Illuminators chose gold leaf over silver due to silver tarnishing through oxidization. Gold will retain its original glimmer from the moment you lay it down through centuries into the future. Notice the tragic deteriorated gold in the flower petals due to readers turning pages.

The printer left a gap at the start of psalm 26 for an “illuminated initial” to be added—the only such gap in the whole book. If the anonymous scribe writing in the margins had anything to do with this, perhaps his preference for psalm 26 lies in the gloss he added to the right: dicas in tentatione ad mala (“you say this in a time of temptation to evil things”). 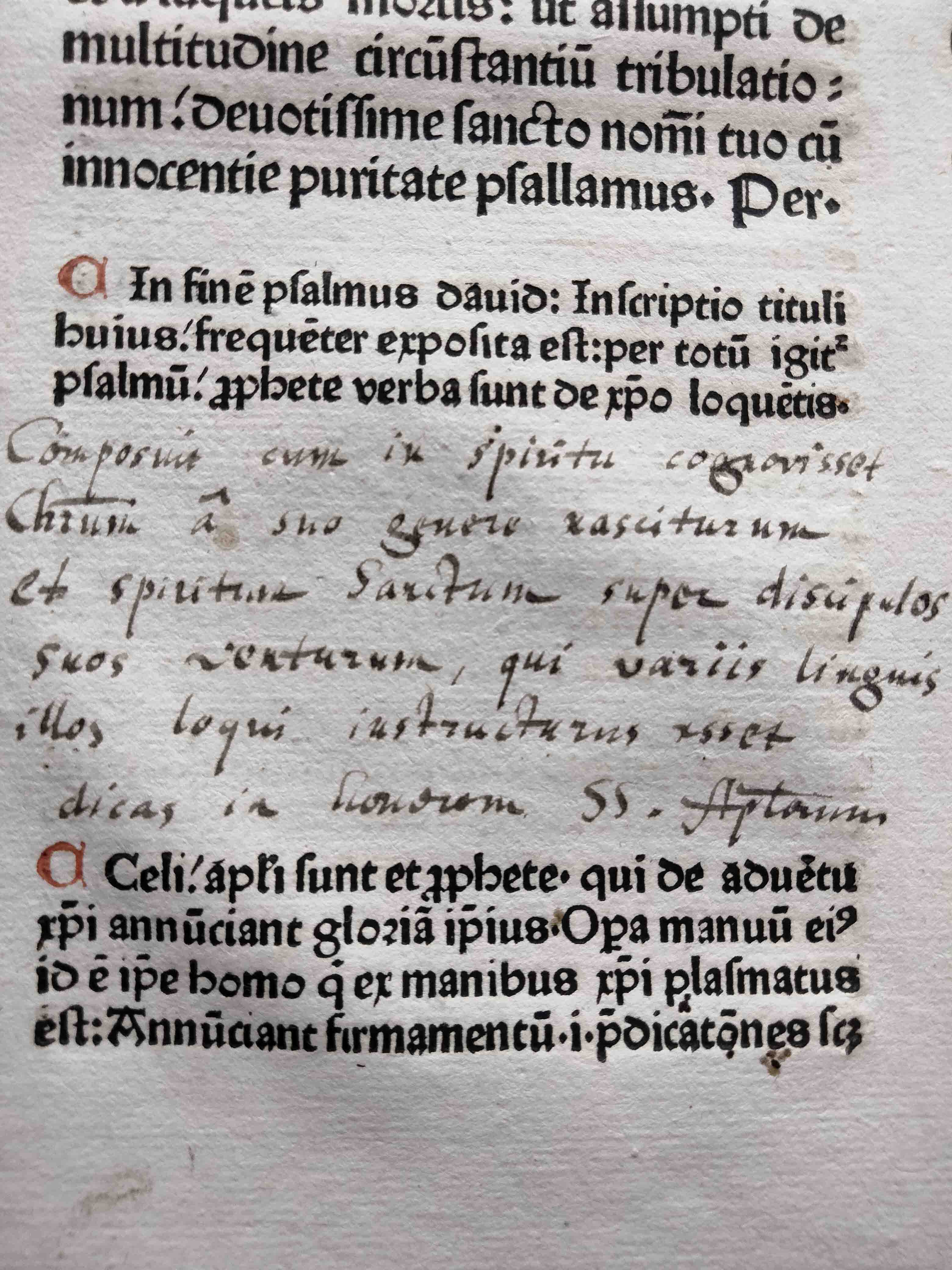 The printer put the psalm texts in the inside column with Bruno’s commentary on the outside, often leaving large gaps to invite the reader to add his or her own glosses. Such notes personalized the book as a treasured heirloom, and the Bruno Psalter has more marginalia than any book in the collection. Here the owner writes of Christ’s prophetic fulfillment of this psalm.

Who was Bruno of Würzburg? – Bruno was a bishop of Würzburg in the first half of the eleventh century. In addition to penning the original manuscript edition of this psalter, he is responsible for commissioning the Gothic cathedral of Würzburg and serving at the court of German emperor Henry III. Gonzaga’s “Bruno Psalter,” produced centuries after his death, is arguably his greatest legacy.

What is manuscript illumination? – During the Middle Ages, liturgical books often received just as much artistic decoration as any other medium of art. Specialized “illuminators” worked alongside scribes to paint title pages and manuscript margins with human figures, vegetation, and abstract designs, often augmenting these patterns with inlaid gold leaf. Gonzaga’s Student Chapel houses a copy of the 1998 “St. John’s Bible”—the first illuminated book commissioned by a Benedictine abbey since the Middle Ages.

What’s with the red ink? – Medieval scribes did not have the luxury of drastic changes in font size to allow titles to stand out from bodies of text. To maximize space, scribes traditionally wrote titles in red ink to stand out easily.

Why did books used to have metal clasps? – On a functional level, clasps helped keep the shape of larger books. More symbolically, clasps communicated to readers that something valuable was hidden in the text worthy of high security. Medieval libraries closely guarded books, sometimes binding them in chains. Clasps continued this tradition in vestigial form.