The sixteenth century saw the onset of the Reformation and the wider use of printing for non-biblical texts. The blackletter or “Gothic” typeface of Gutenberg has now become restricted to texts printed in German (left), whereas Latin texts now receive Latin type (right). Blackletter was how fifteenth-century German scribes wrote manuscripts, and its gradual loss provides another way that printed books separated themselves from medieval tradition. 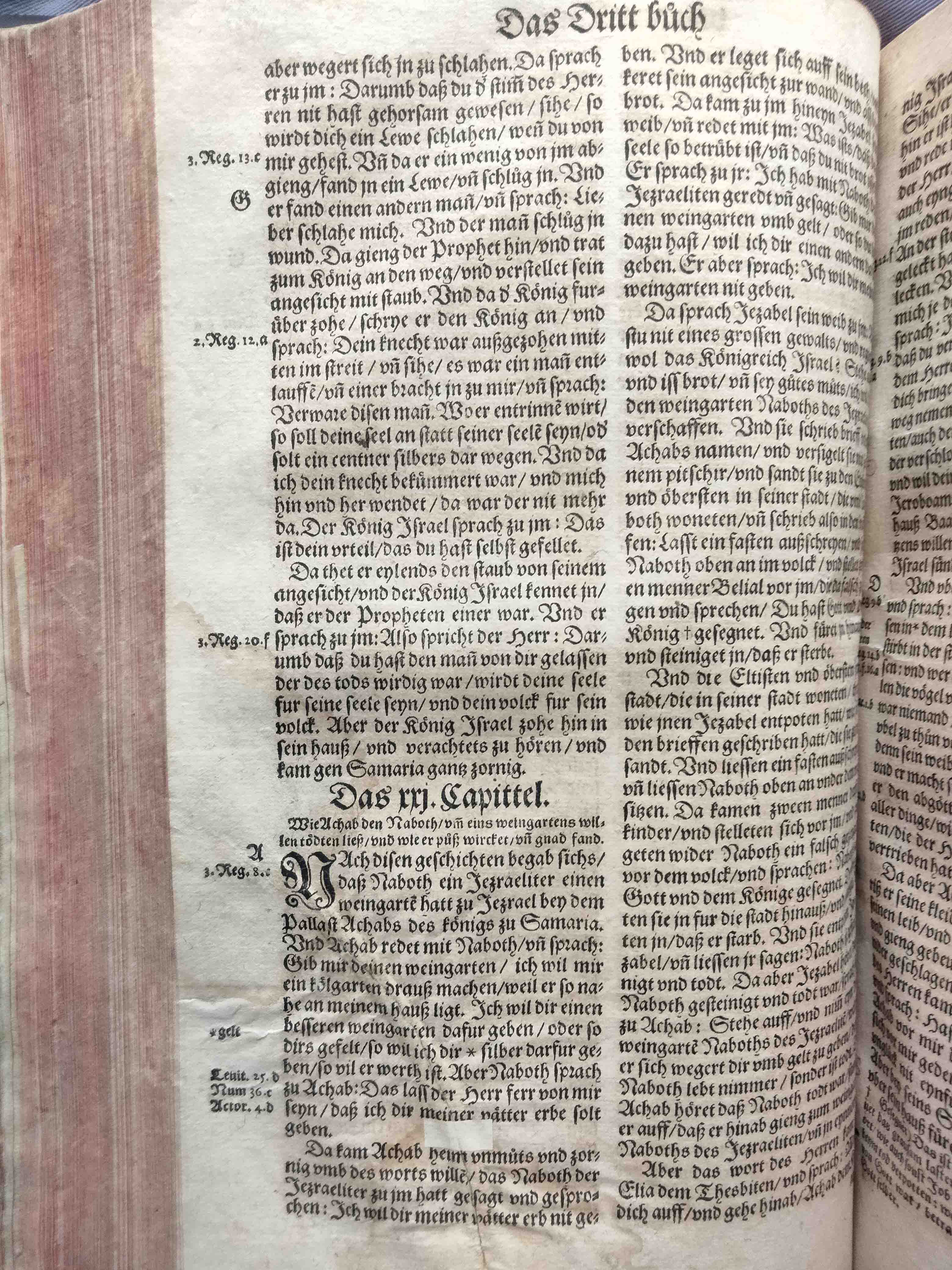 Dietenberger’s margins are certainly smaller than Gutenberg’s (thus inviting less participation on the part of the reader). These marginal notes act like hyperlinks to quotations and allusions within the biblical text just as modern Bible sites might allow you to click on individual verses. Even our modern webpages can only reuse the two technologies of ancient bookmaking: the hyperlinked codex and the vertical text of the scroll. 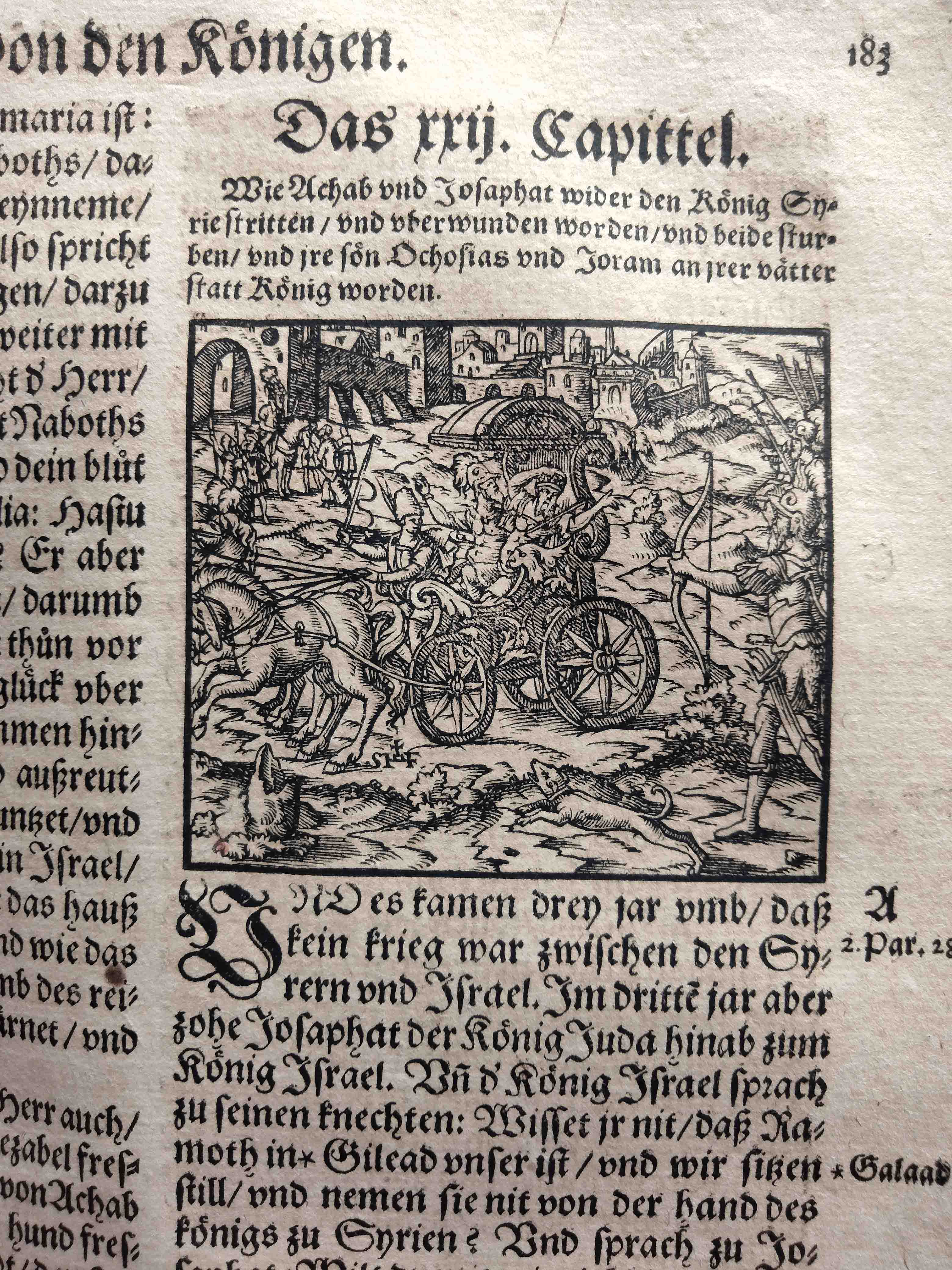 Dietenberger strung occasional illustrations throughout his work to aid the illiterate. A Bible as large as this was not for private reading but rather for a community of listeners. The castles and clothes show his best attempt at guessing what ancient Israelites looked like, though it suspiciously amounts to how sixteenth-century Germany looked. 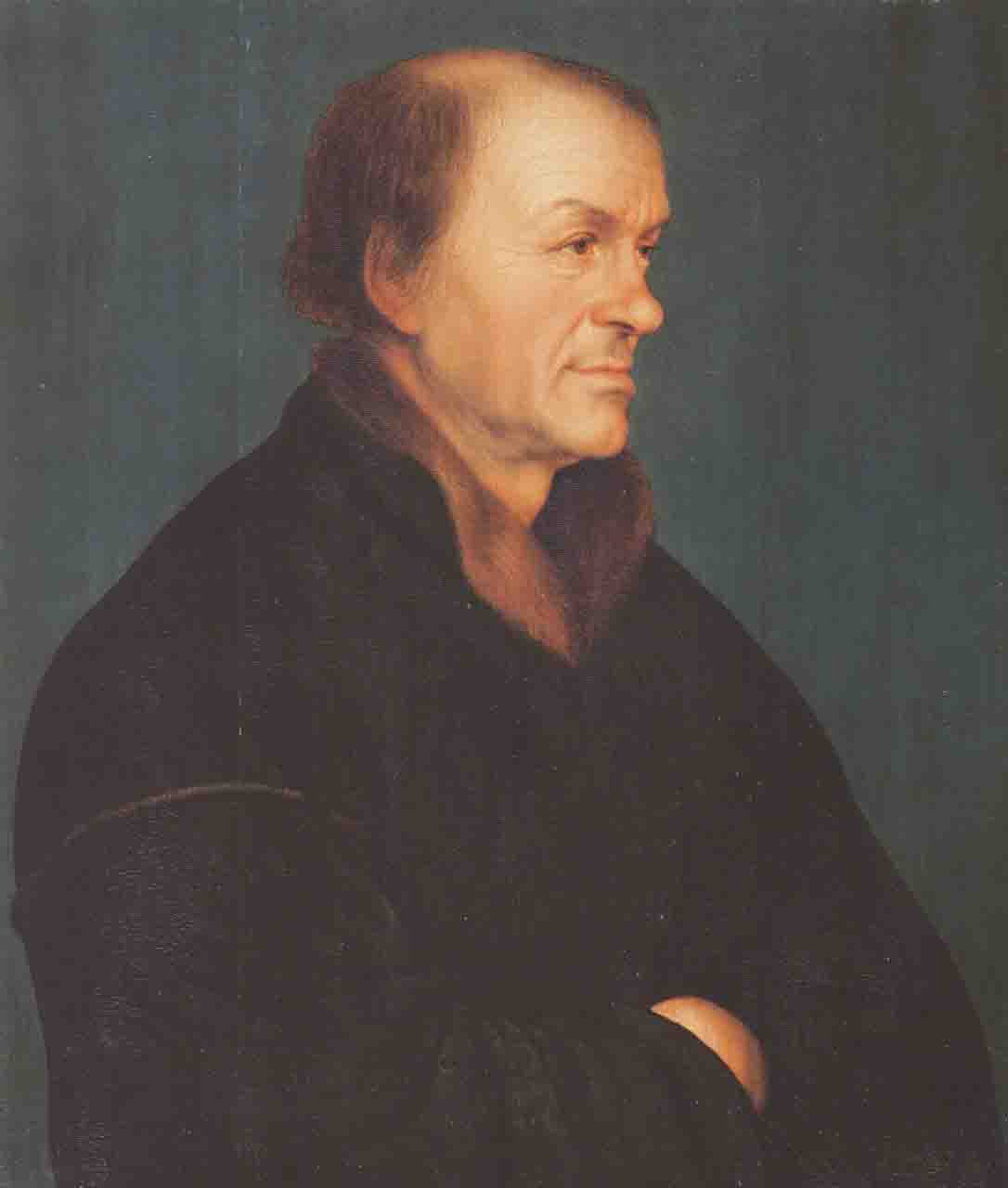 Johann Froben was a famous Swiss printer and one of the most successful printing tycoons on the continent. Specializing in Christian and humanist texts, Froben was particularly known as the printer of Desiderius Erasmus, “Prince of the Humanists.” The two lived for a time together in Froben’s house in Basel and became lifelong friends.

Froben died in 1527, but his son Hieronymus continued his business to be able to print this 1560 edition of Irenaeus. The illustration is called a “printer’s mark,” advertising to customers of the high quality they could expect from Froben books.  The snakes of the Hermes staff enclose a dove alluding to Matthew 10:16 where Jesus exhorts the disciples to be wise like serpents and innocent as doves. No other image could perfectly capture the blend of classical and Christian influences channeled into the sixteenth-century Northern Renaissance.

Did the Catholic Church suppress vernacular Bibles? – There were many translations of the Bible into German before Martin Luther. What Luther did was create the first easily understood German translation that didn’t feel as stiff as the Vulgate. Although Catholic monarchs in England, France, and Spain suppressed vernacular Bibles for various reasons at different times, there was never a Church-wide ban on vernacular Bibles imposed by a pope or ecumenical council. Different locales responded to the threat of Protestantism differently. In Germany, the solution was to try and get better Catholic translations into parishioners’ hands, hence the effort of Dietenberger. See Wim Francois, “Vernacular Bible Reading in Late Medieval and Early Modern Europe: The ‘Catholic’ Position Revisited” (2018).

What made the Northern Renaissance different? – Since the lifetime of Petrarch (d. 1374), the Italian Renaissance focused on the recovery of Greco-Roman literature and the emulation of classical oratory and art forms. The printing press allowed the Renaissance to move north and take on new characteristics. Rather than focusing on literature and art, northern humanists were more concerned with the printing of patristic works of theology and the textual criticism of the New Testament. Italian humanists carved out their own intellectual niche, but in the North, humanists often competed in the same lane with the theology faculty of universities.