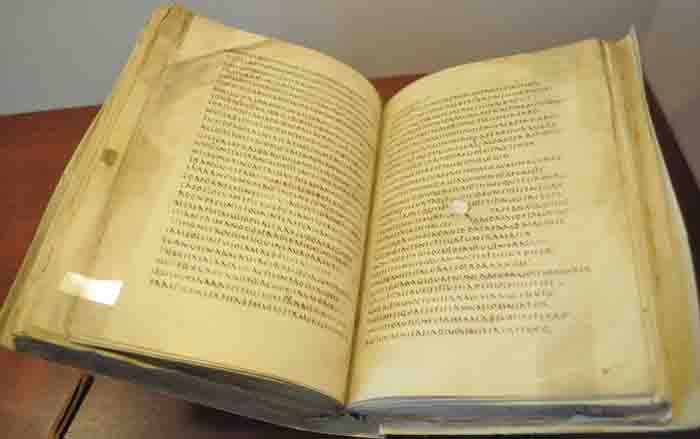 The Medici Manuscript is the most important of the manuscripts of the works of the Roman poet Virgil. Written in rustic capital letters in the 5th century, probably in Rome, the original manuscript once belonged to the Benedictine Monastery at Bobbio (Italy), later to the Vatican Library and finally to the Laurentian Library in Florence, where it is now preserved.  This very exact facsimile of the Medici Manuscript was made by the Italian government in April 1931 and is copy Number Sixty-two of the five hundred copies produced in this format.

Bronze Lepton of the reign of Alexander Jannaeus, 103-76 BC 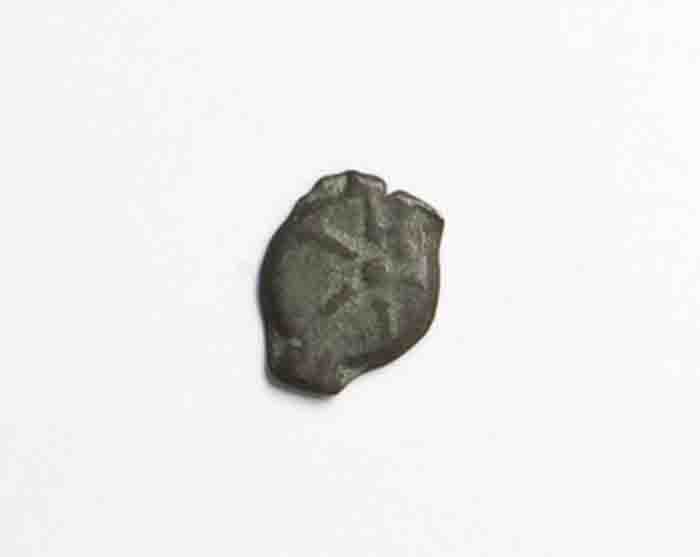 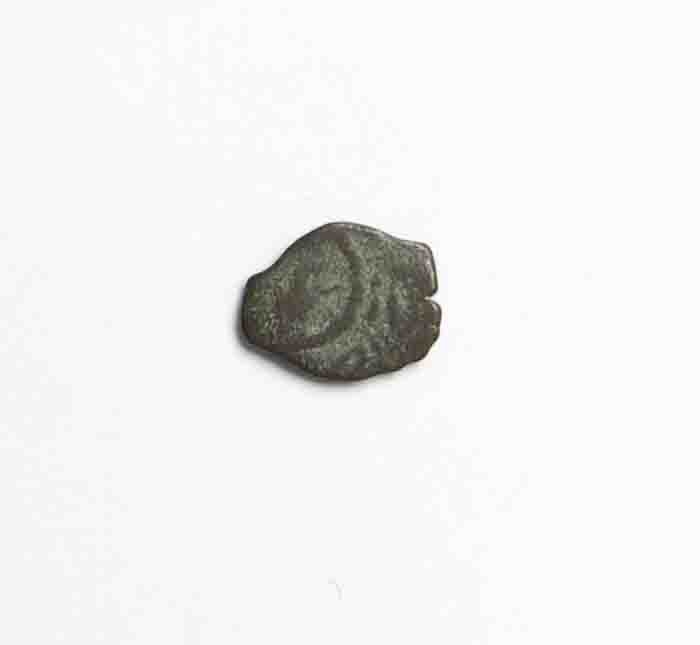 Also known as “The Widow’s Mite”, referring to the poor widow who gave her last coin to the alms box in the Temple of Jerusalem as recorded in Luke 21:1-4. Though these coins were struck long before the life of Christ, they were still in circulation in Jerusalem during Christ’s lifetime. Usually struck rather carelessly and crudely, leptons are believed to be the lowest denomination coin ever struck by any nation. The leptons of King, and High Priest, Alexander Jannaeus bore both the Hebrew inscription “Yehonatan” (“Jonathon”, a reference both to the third name and to the older brother of Alexander Jannaeus), and the Greek “BASILEWS ALEXANDROU”, or “King Alexander”.

Silver Denarius of the reign of Augustus Lugdunum Mint, 2 BC-4 AD 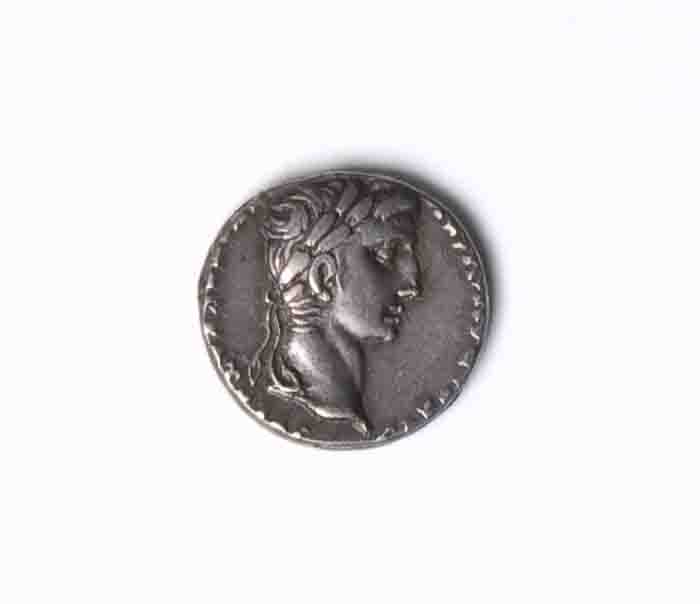 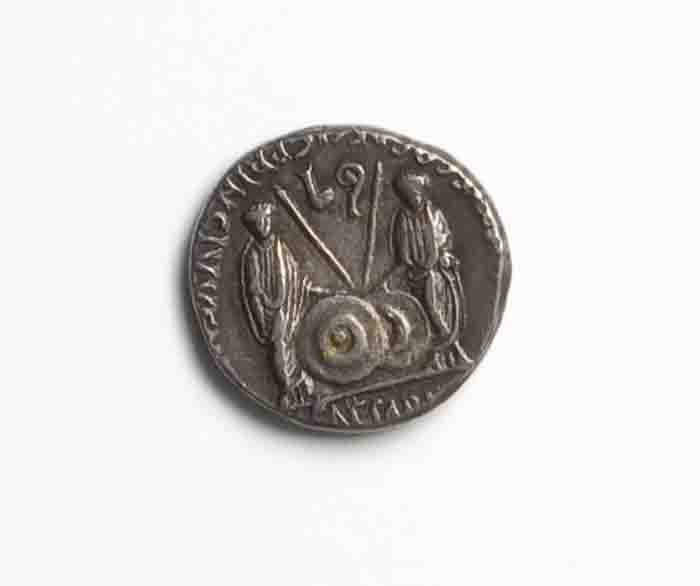 Bearing the portrait of Caesar Augustus on the front, the reverse depicts the two grandsons of Augustus, Gaius and Lucius. They stand together each resting a hand on a round shield with a spear behind. Gaius, the older and in the distinguished position on the left, rests his shield in front of Lucius’ indicating prestige. Above Gaius in the upper field, signifying his office as a pontiff, is a simpulum, a small long-handled vessel or ladle used at ritual sacrifices to make libations. The sign of priesthood, it was one of the insignia of the college of pontiffs. Above Lucius, the lituus, a crooked staff used as a religious instrument by Roman augurs for marking out ritual spaces in the sky, marks him as an augur. A legend reading “Caesar Augustus, son of god, father of his country” (CAESAR AVGVSTVS DIVI F PATER PATRIAE) surrounds the portrait of Augustus. The depiction of Gaius and Lucius in imperial coinage is a reflection of Augustus’ adoption of his two grandsons as his sons in an attempt to groom them as his heirs to the throne.  However, his efforts proved in vain, as Lucius died in 2 AD and Gaius in 4 AD

From the Permanent Collection of the Jundt Art Museum at Gonzaga University, # 2000.3.41

Bronze coin of the reign of Valentinian I Siscia Mint, 364-367 AD 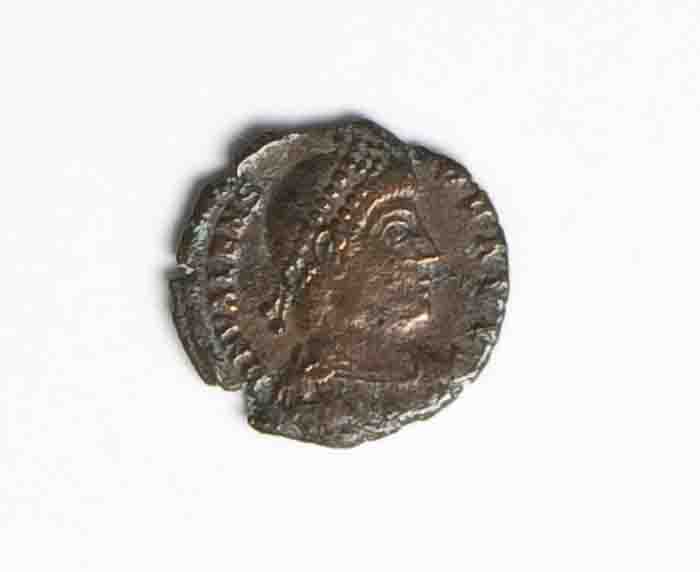 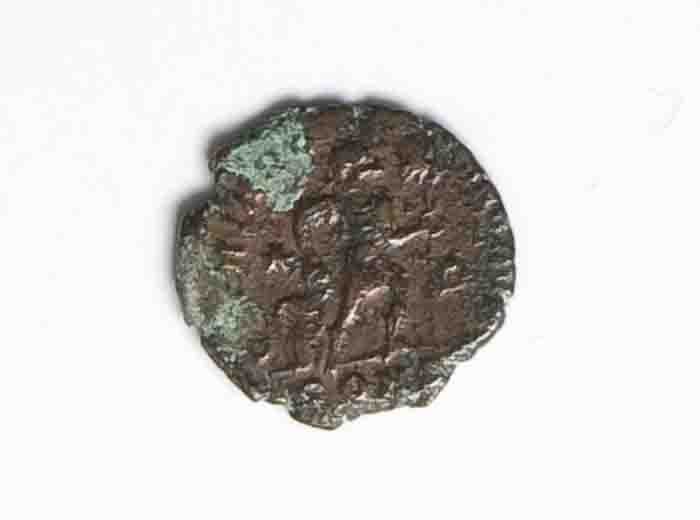 Early in the reign of Valentinian I several coins were minted bearing a portrait of the emperor Valentinian (r. 364-375 AD) wearing a pearl diadem, and combatively draped and cuirassed. The reverse depicted the emperor advancing right, bearing a labarum (a military standard displaying the “Chi-Rho” symbol of the Greek name of Christ), and dragging a captive behind him in the lower field. This series of militaristic coinages appears to be linked to Valentinian’s success in a campaign under the previous emperor, Julian (r. 355-363 AD), against the Alamanni, a Germanic tribe from the upper Rhine. Having been a perpetual problem for Roman expansion in Germania, Valentinian defeated still another Alamanni incursion in 367 AD. The labarum standard is in accordance with Valentinian’s reputation, who unlike his predecessor, the Emperor Julian, was a Christian.

From the Permanent Collection of the Jundt Art Museum at Gonzaga University, # 2000.3.22 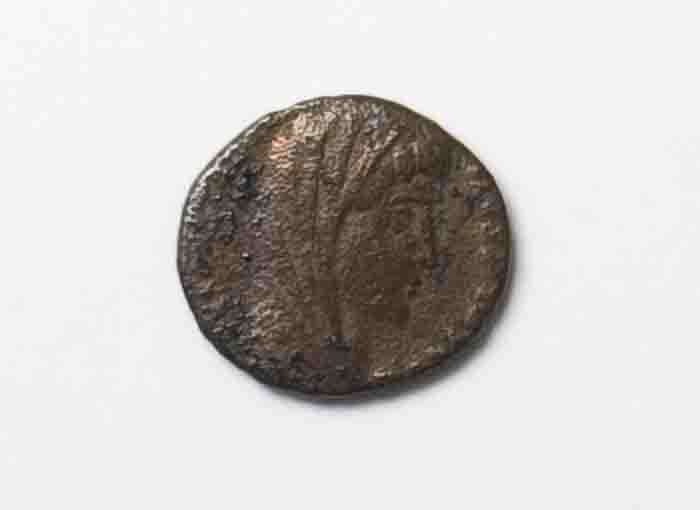 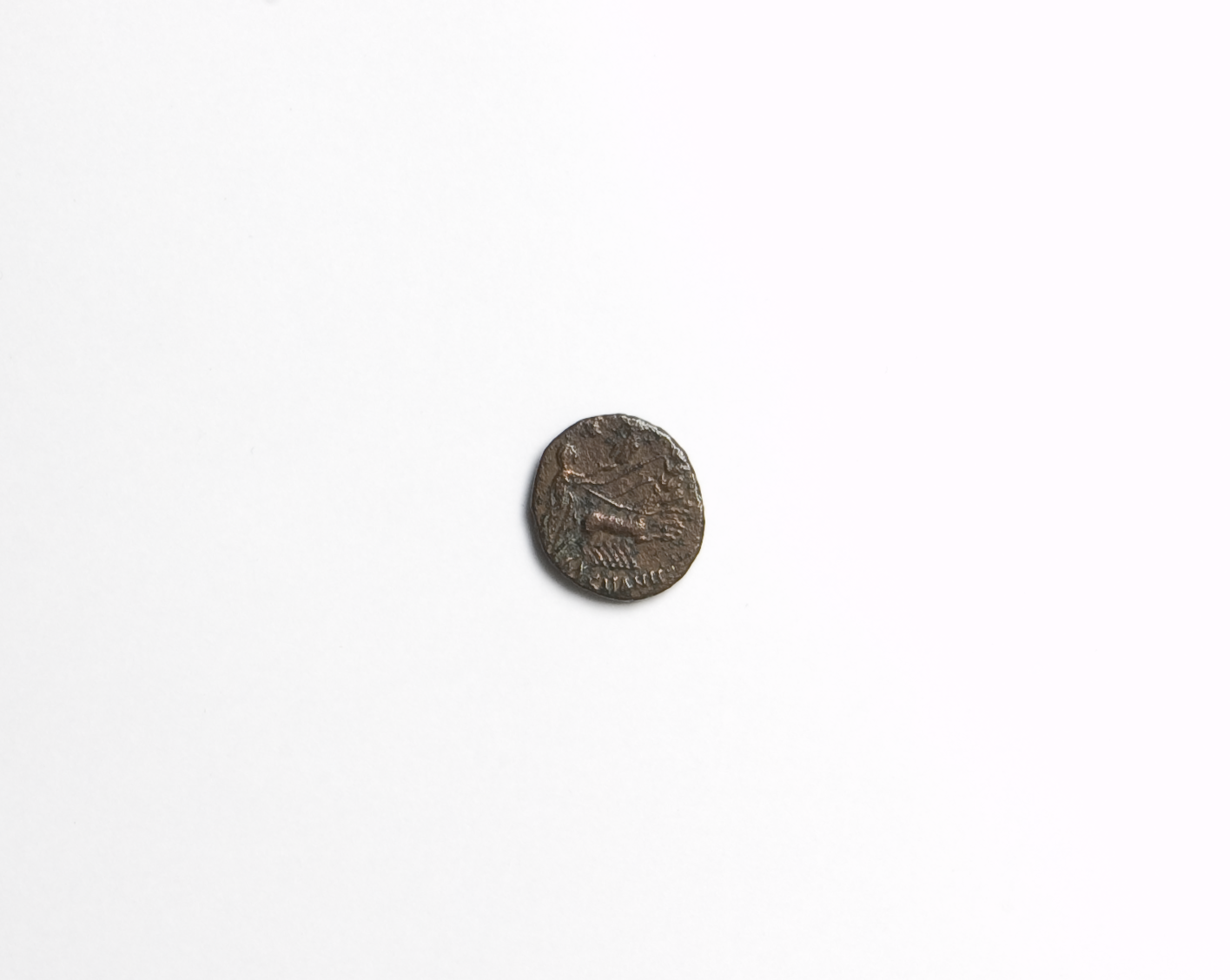 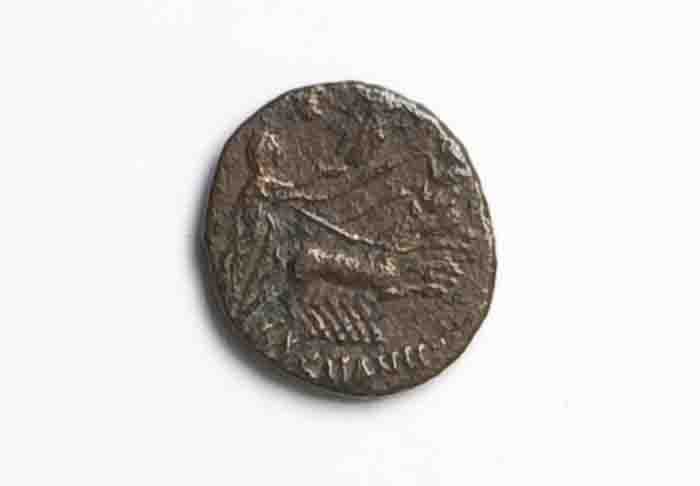 Following the death of Constantine I (“the Great”, r. 306-337 AD) in early 337 AD, his sons, who succeeded him as co-rulers, Constantine II (r. 337-340 AD), Constans (337-350 AD), and Constantius II (r. 337-361 AD) minted several commemorative coins in his honor. This coin, with a shrouded bust of Constantine on the obverse bears the legend “For the deified Constantine, consecrated father” (DIVO CONSTANTINVS PT AVGG). The reverse shows Constantine drawn to the right in a four-horse chariot, with the hand of God reaching down to bring him to heaven, similar to the Biblical story of Elijah ascending into heaven in a chariot. These issues give credit to Constantine’s role as the first emperor to convert to Christianity, his reversal of the persecutions of Christians set forth by his predecessor Diocletian (r. 284-305 AD), and the pronouncement of the Edict of Milan (313 AD) which proclaimed religious tolerance of Christians throughout the empire.

From the Permanent Collection of the Jundt Art Museum at Gonzaga University # 2000.3.26

Bronze coin of the reign of Augustus Rome Mint, 7 BC 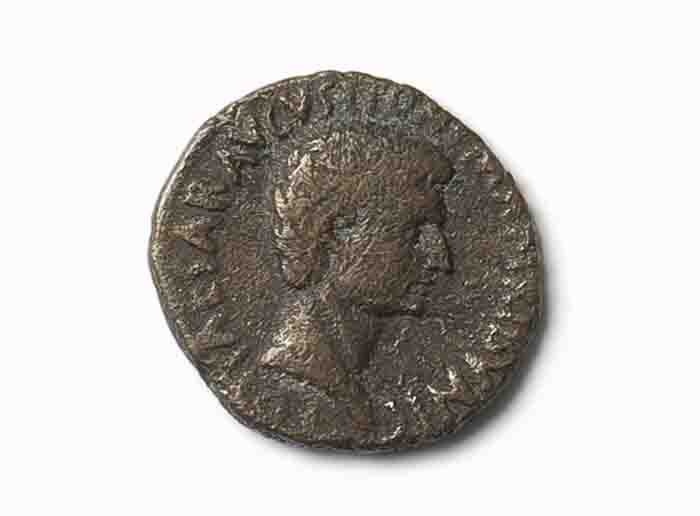 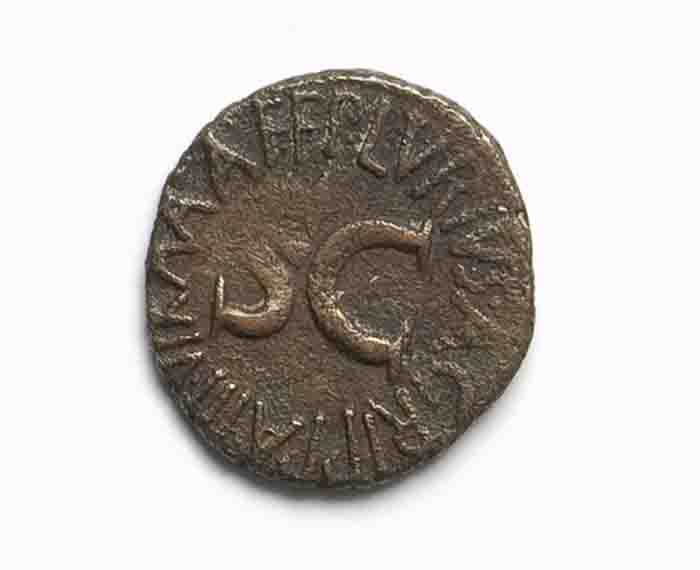 Dating from ancient Greece and the later centuries of the Roman Republic, the practice of using moneyers (monetales), people who physically create money, was quite popular. Though rare for the title of the moneyer to appear on coins during the Roman Republic, it was revived under the reign of Augustus and the title appeared quite often. Civic appointments, monetales were employed in a group of three and the coins struck by each individual bore their own name. This coin was struck during the reign of Augustus by the moneyer P. Lurius Agrippa. The obverse portrays the bust of Augustus surrounded by a legend reading “The venerable Caesar sovereign pontiff invested with the tribunician power” (CAESAR AVGVST PONT MAX TRIBVNIC POT). The reverse bears a large “SC” in the center, standing for “by decree of the Senate” (senatus consulta). The inscription encircling the reverse (PLVRIVS AGRIPPA IIIVIR AAAFF) includes the name of the moneyer who struck these particular coins, P. Lurius Agrippa, of the XI college of monetales. His name is followed by the abbreviation of the epithet of monetales, which when expanded reads, “Commission of three men under whom gold, silver and bronze coins were struck” (Triumviri Auro, Argento, Aeri, Flando, Feriundo).

From the Permanent Collection of the Jundt Art Museum at Gonzaga University, #2000.3.42 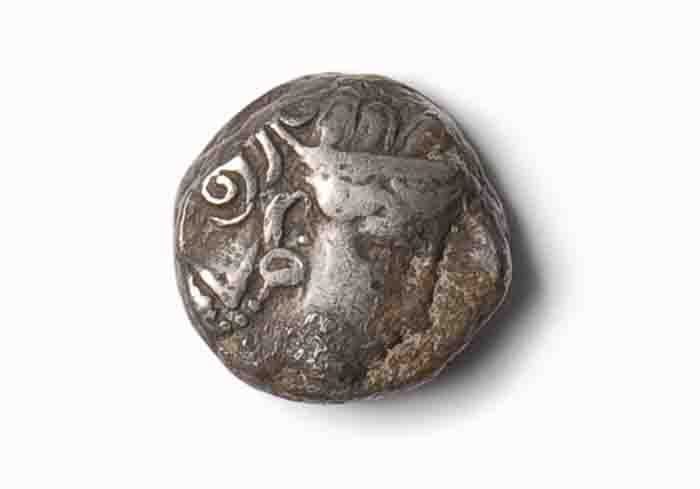 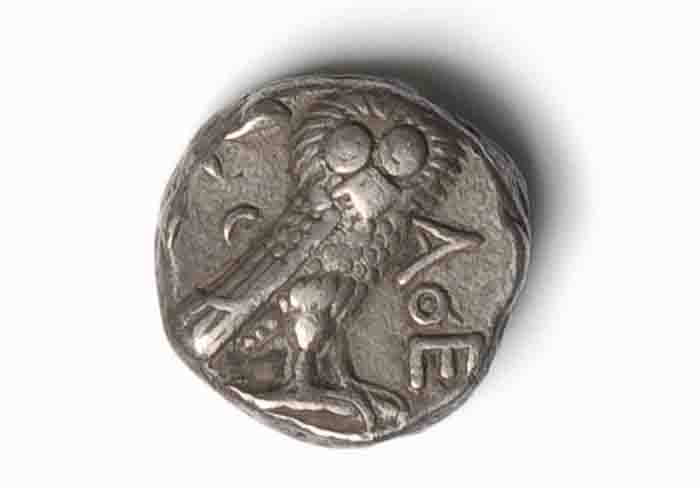 The Athenian tetradrachm – the most widely used and circulated tetradrachm of the Greek world – was in extensive circulation from the 6th century BC until the late 1st century BC.  This ancient Greek coin was worth four drachmas; a skilled worker in ancient Greece could earn up to two drachmas a day.  The Athenian tetradrachm bore the stamp of the goddess Athena on the obverse. This particular fourth-century coin depicts Athena, in profile facing right, in a crested Attic helmet decorated with a spiraling palmette, with three olive leaves above her visor. The reverse bears an owl, the most iconographic symbol of Athens, of a slightly later and more slender style, with an olive sprig and a crescent moon in the upper left field behind it. The Greek letters ΑΘΕ to the right of the owl represent the name of the city of Athens. This particular design of the tetradrachm remained essentially unchanged for most of the coin’s entire circulation, the only changes being to the decoration of Athena’s helmet, whether she was smiling or frowning, and the fullness or slenderness of the owl.

From the Permanent Collection of the Jundt Art Museum at Gonzaga University # 2000.3.1 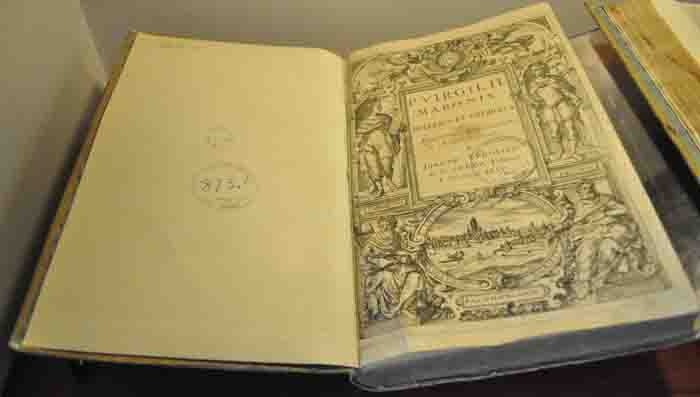 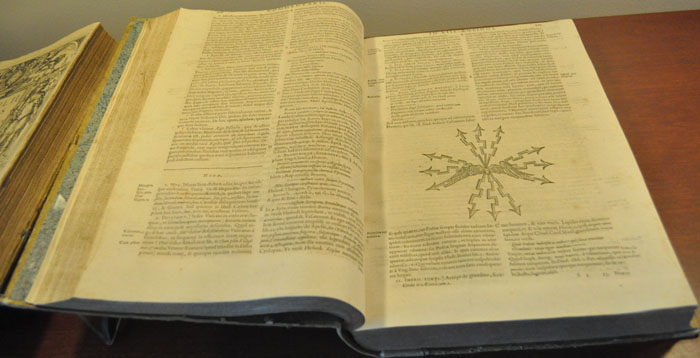 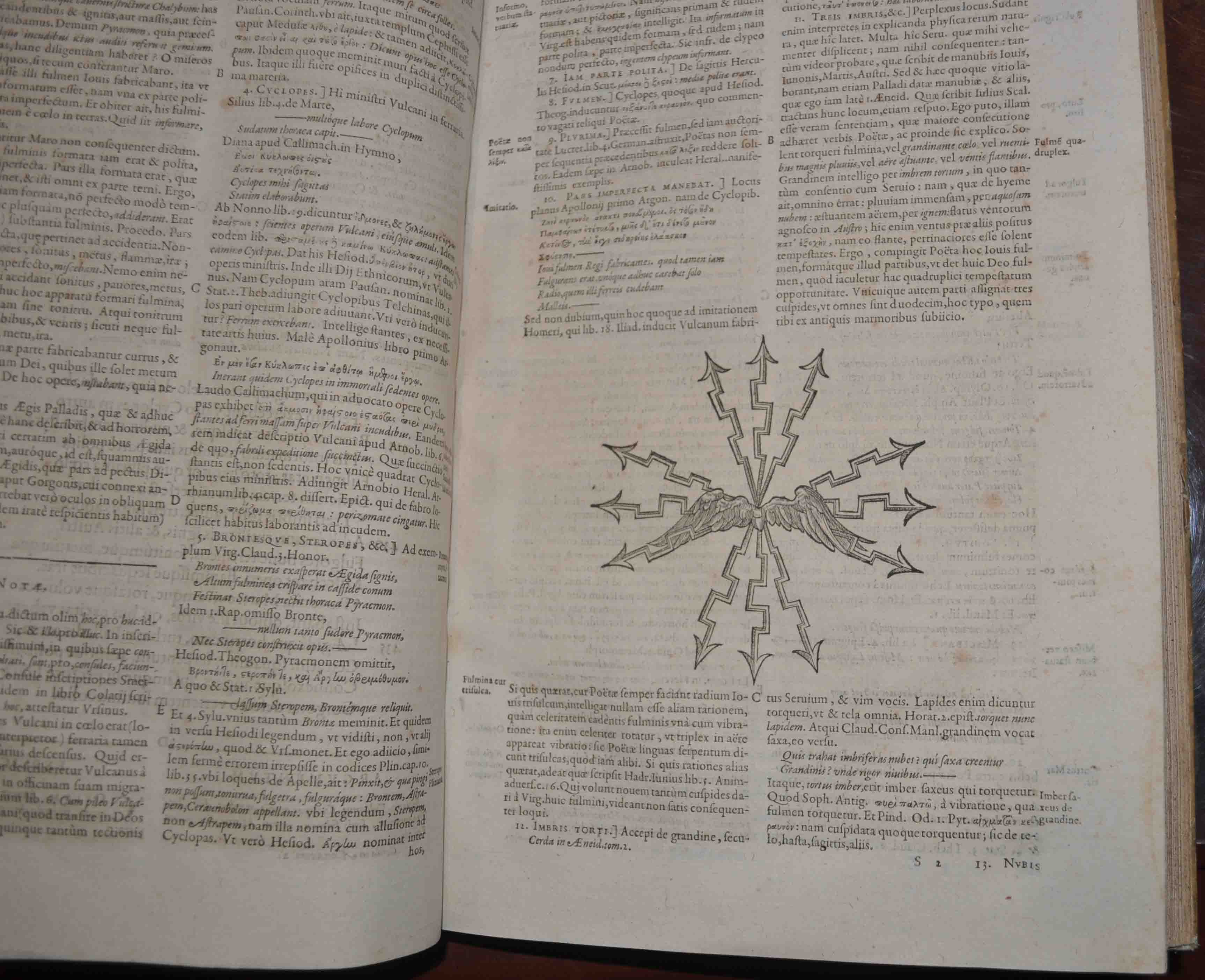 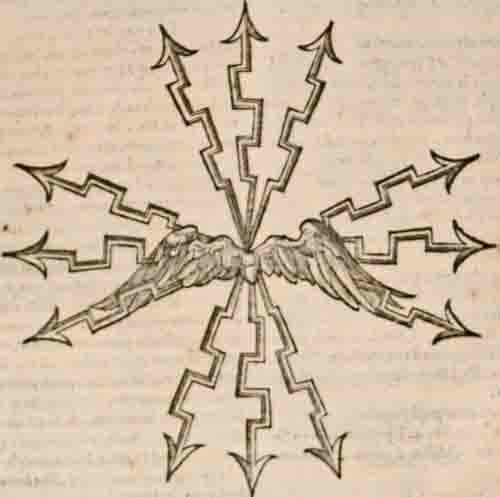 The Spanish Jesuit Juan Luis (Joannes Ludovicus) de La Cerda (c. 1560 – 1643) was born in Toledo and joined the Society of Jesus on October 4, 1574 when he was about fifteen years old.  By 1583 he was a Professor of Latin Grammar in the Jesuit colleges in Murcia and then in Oropesa. By 1597 he became a Professor of Poetry, Rhetoric and Greek in Madrid.

In our own times the Italian Enciclopedia Virgilianna praised La Cerda’s commentary for its “minute linguistic, mythological and historical analysis and criticism of the works of Virgil, rich in reference to Greek and Latin sources, and consolidated by shrewd use of medieval and humanist exegesis; a work on which the modern tradition of exegesis is based”.

Note about the arrow illustration:

De la Cerda includes this illustration (taken, he says, “from ancient marbles”) because of the following lines of Virgil. The lines describe a thunderbolt as it is being forged by the Cyclopes who aid Vulcan, the god of the forge and fire:

As de la Cerda notes, thunderbolts are traditionally shown with twelve points in Roman art. He finds that this corresponds well with Virgil’s description of their construction:  three shafts for each of the four ingredients, i.e., rain, clouds, fire, and wind.

Why three shafts for each? De la Cerda has an answer to that as well. Thunderbolts vibrate so much as they pass through the air that they seem to be threefold. Thus that is how poets describe them (just like they talk about the “threefold tongue” of a hissing snake, de la Cerda wrote.)