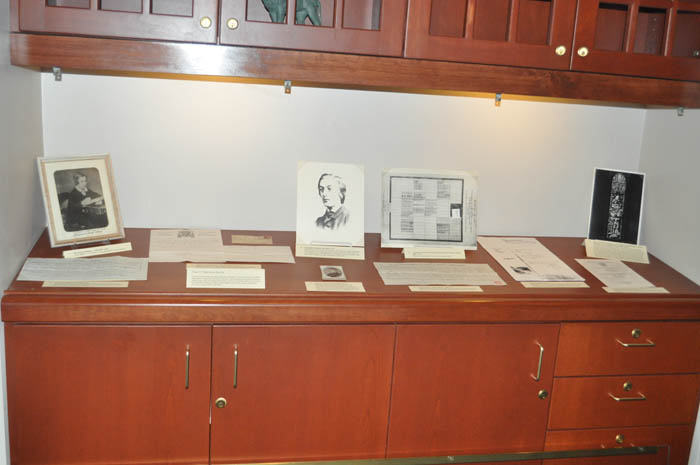 Confirming the factual and legal parameters of Hopkins’s life was a particular emphasis of Bischoff’s institutional and private searches. Some documents and artifacts had been hiding in plain sight in various Jesuit houses, archives, or libraries; others were secured by booksellers. In the late 1940s, Lionel Hopkins was the first of many people who generously donated items to the Bischoff’s Research Collection.

Kate and Manley Hopkins lived in Stratford, a village just east of London, when they were first married. Hopkins was born 28 July 1844, and baptized 24 August in the parish church of St John the Evangelist.

Certificate of confirmation as a Roman Catholic (BRC 11:3) 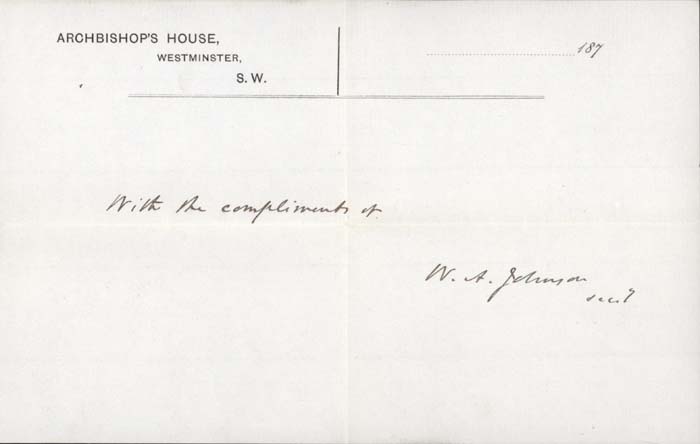 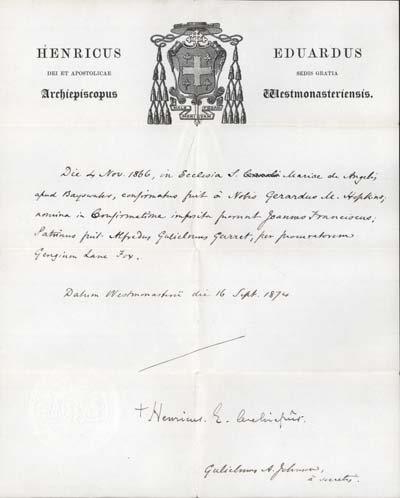 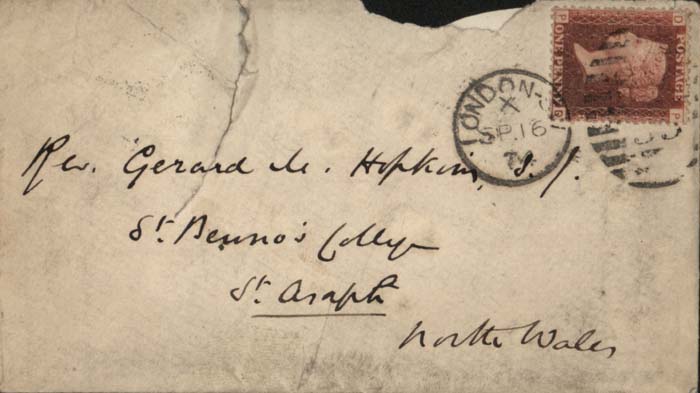 Hopkins was received into the Roman Catholic Church on 21 October 1866, by John Henry Newman; he was confirmed by Henry Edward Manning, Archbishop of Westminster, on 4 November 1866. The back of the envelope states, in Hopkins’s handwriting, “certificate of confirmation.” This is one of the documents Hopkins was required to provide before his ordination.

After a month of illness (the “complaint” was not originally diagnosed as typhoid), Hopkins died on Saturday, 8 June 1889. The death certificate specifies peritonitis. The funeral mass was said in the Jesuit church, St Francis Xavier, on 11 June. 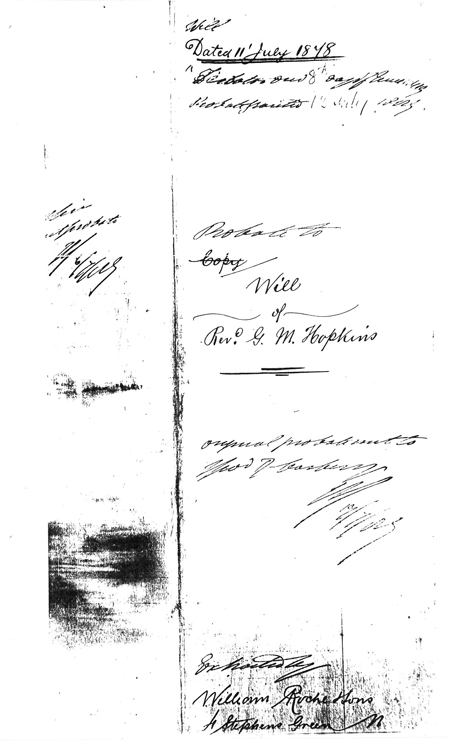 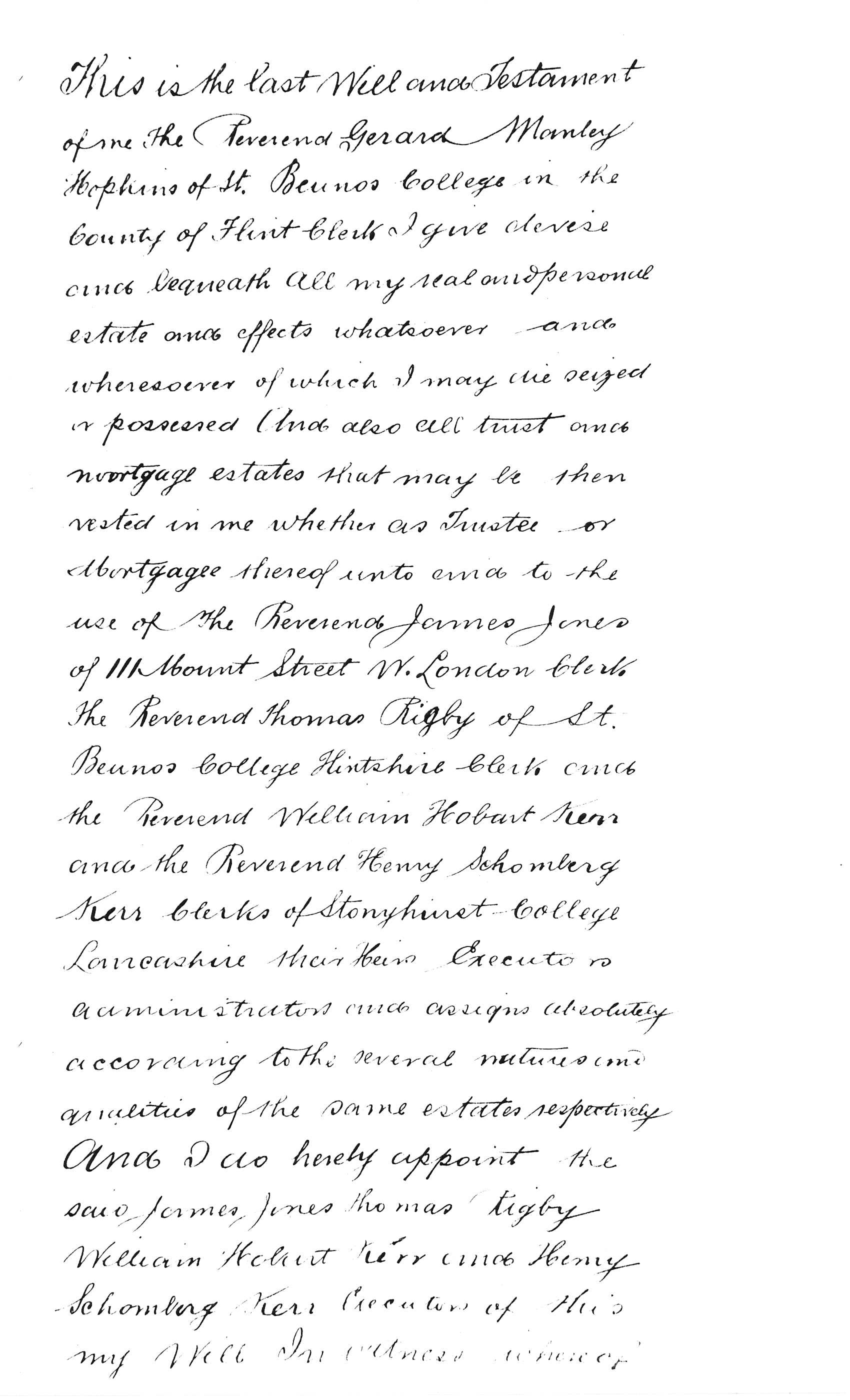 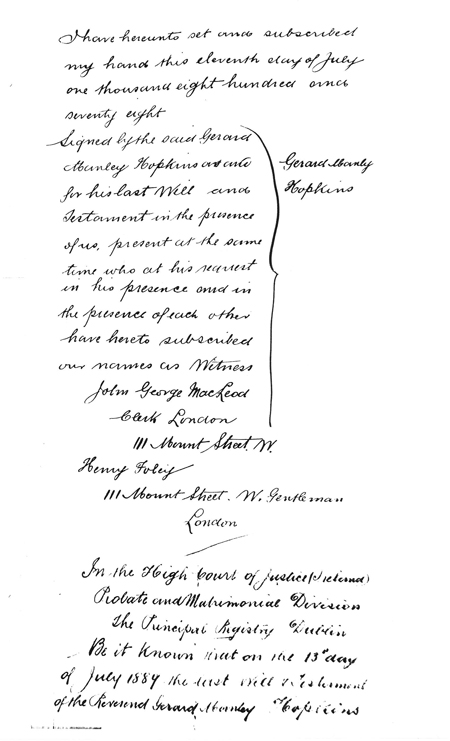 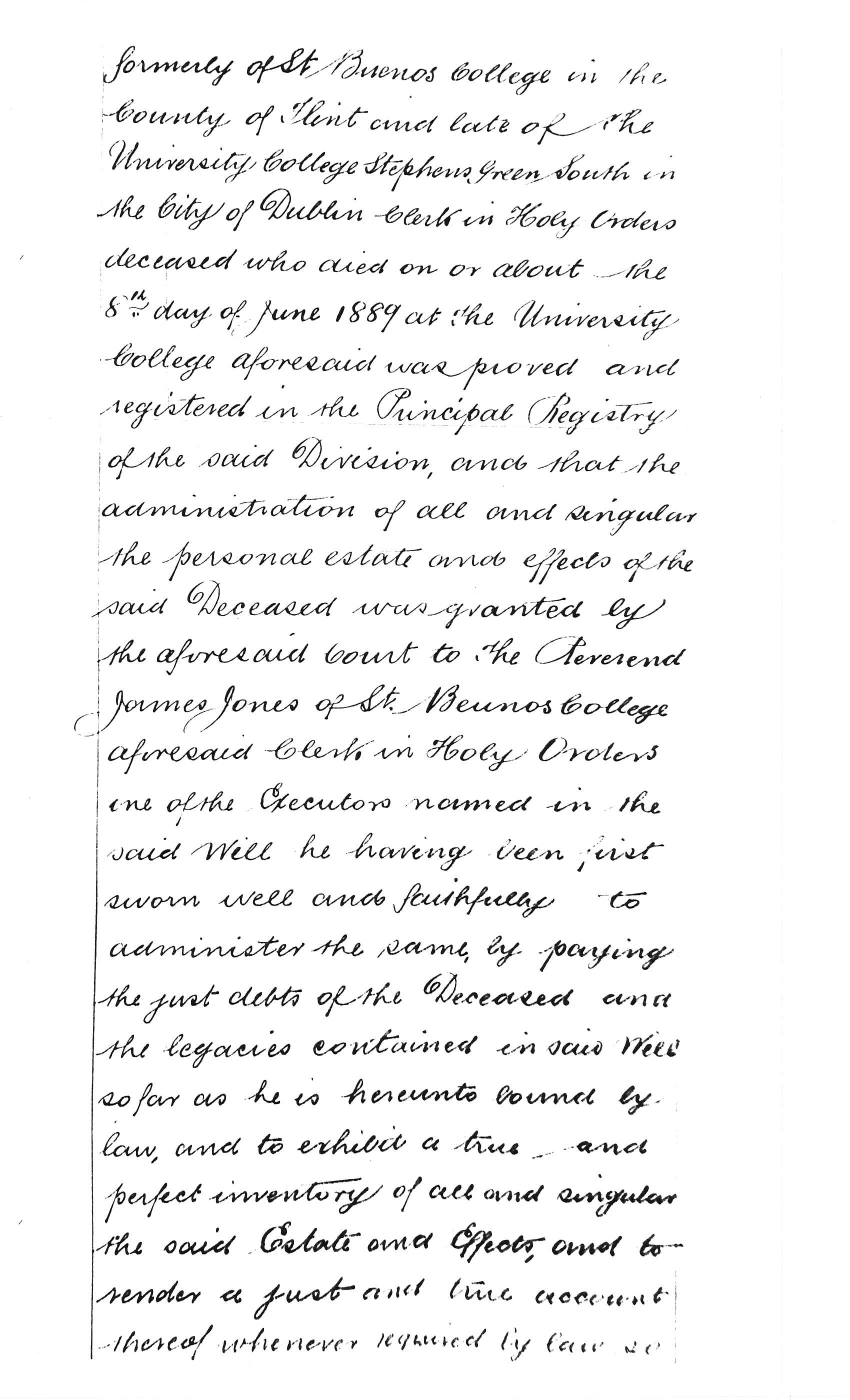 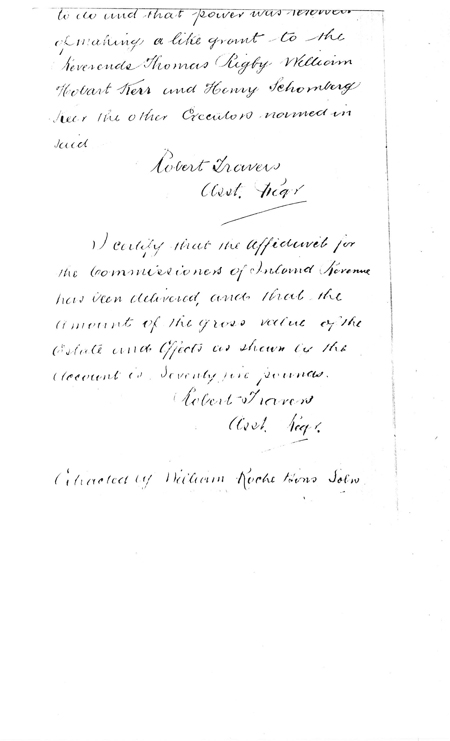 To symbolize their vow of poverty, it is customary for Jesuits to write a “last will and testament,” in which everything is bequeathed to the Society, before taking final vows. Until Fr. Bischoff discovered Hopkins’s will in 1947, issues of copyright concerning Hopkins’s poetry and papers could not be resolved. 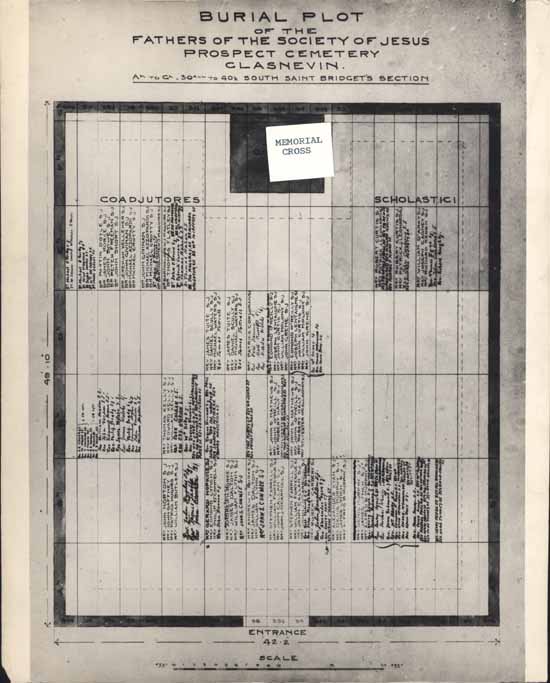 Hopkins is buried in the far left section, third quadrant down. 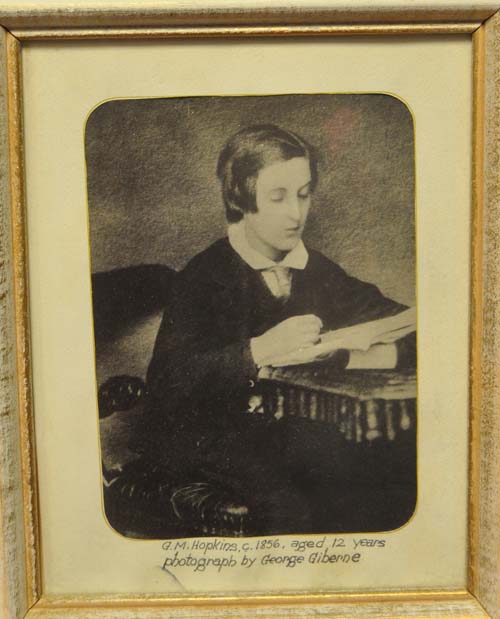 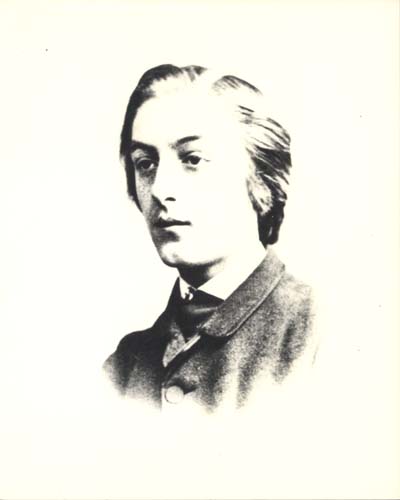 Hopkins matriculated at Oxford University in April 1863, and began his studies in literae humaniores (classical languages, literature, and history; philosophy). He was awarded a “first” in Moderations, the examinations taken in November 1864, and a “first” in Greats, the final examinations in June 1867. 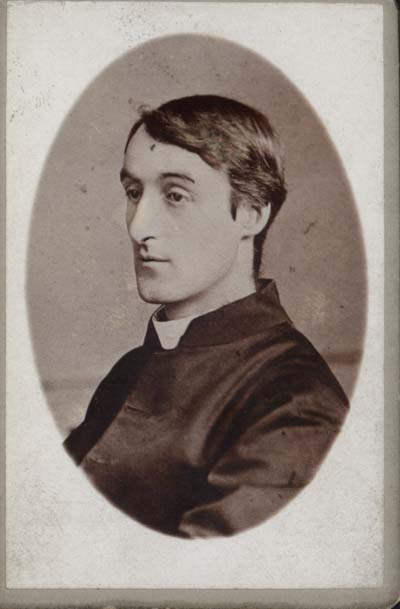 Hopkins returned to Oxford from November 1878 to October 1879 as assistant pastor and curate of St. Aloysius. The carte de visite, taken by Forshaw and Coles, Oxford, was Kate Hopkins’s favorite portrait of her son. This particular copy was originally owned by Frances de Paravacini. She and her husband Francis, who had known Hopkins since their undergraduate days, were good friends. After Hopkins’s death, they donated a baptismal font to St Aloysius in his name. In her letter to Kate Hopkins after the poet’s death, Frances described him thus: “He was so lovable – so singularly gifted – &, in his saintliness, so apart from, & different to, all others. Only that his beautifully gentle & generous nature made him one with his friends; & led us to love & to value him. – feeling that our lives were better, & the world richer, because of him.” 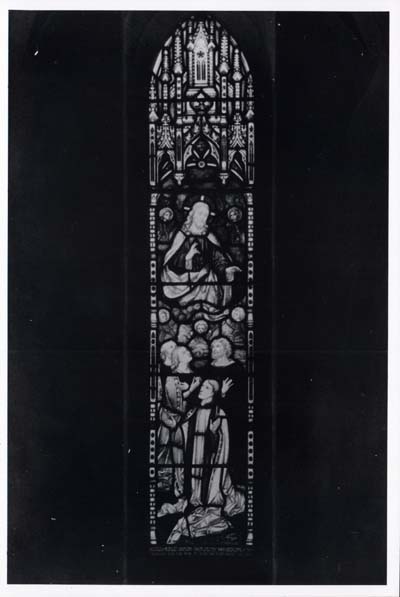 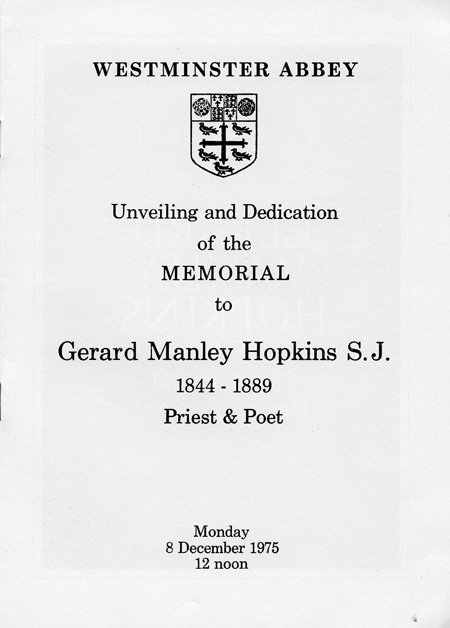 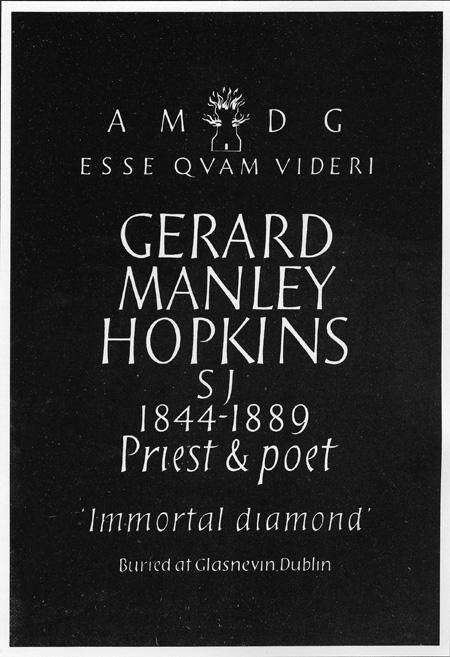