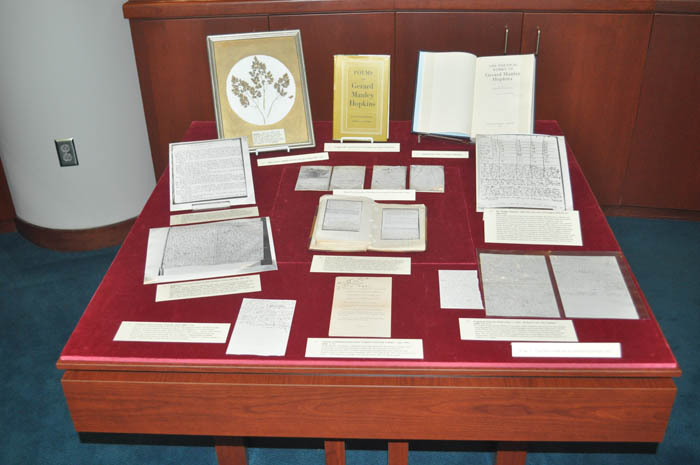 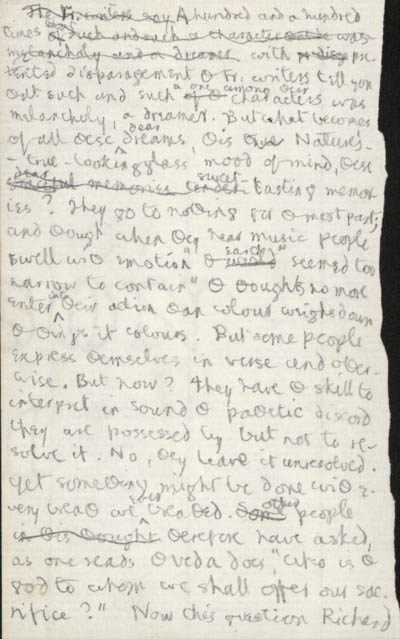 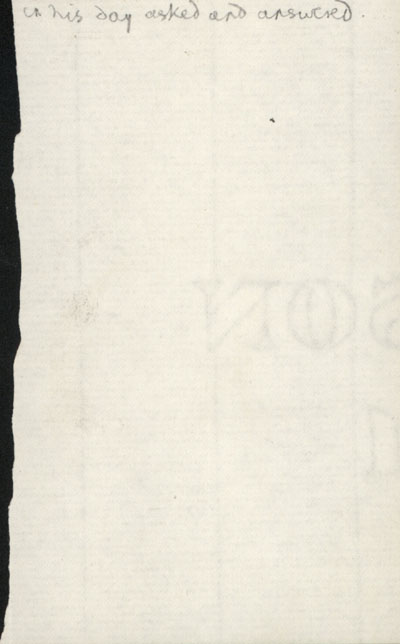 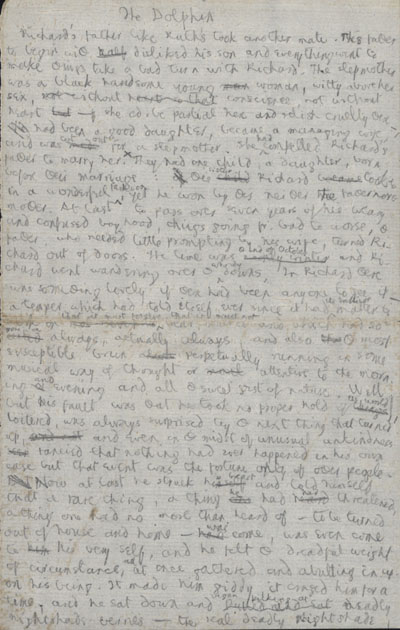 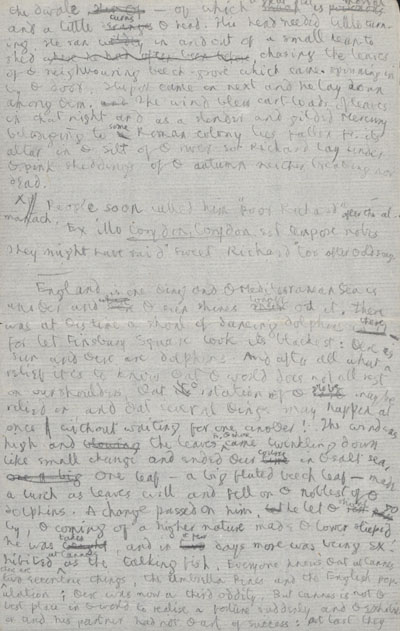 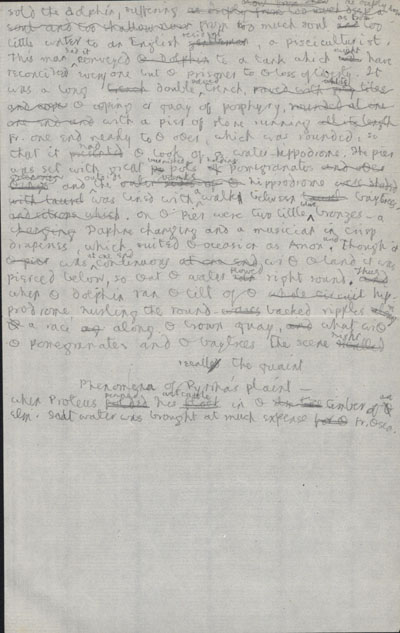 Handwriting suggests this is work from 1863-64. Writing to Alexander Baillie in summer 1864, Hopkins states that he has drafted “the beginning of a story to be called Richard, and some other fragments” (20.07-14.08.1664). One can only guess how Hopkins planned to link the two main elements of his story: a fairytale-like narrative concerning a melancholy young man who is sent into the world, unprepared, by a cruel father and a heartless stepmother, and the story of a dolphin captured in the Mediterranean and put on display in London. 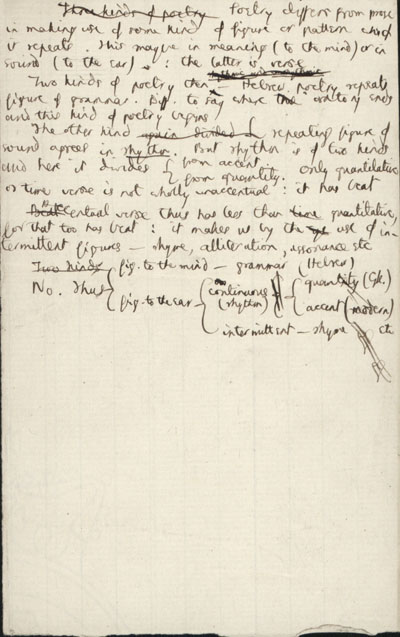 In 1873-74, before moving to Wales for his theological studies, Hopkins taught rhetoric to Jesuit students at Manresa House, Roehampton. Two incomplete lectures, “Rhythm and the Other Structural Parts of Rhetoric – Verse” and “Poetry and Verse” were published in Journal and Papers. This manuscript fragment probably dates from the same time; the recto begins: “Three kinds of poetry  Poetry differs from prose in making use of some kind of figure or pattern which it repeats.” On the verso: comments on a Jesuit ceremony. 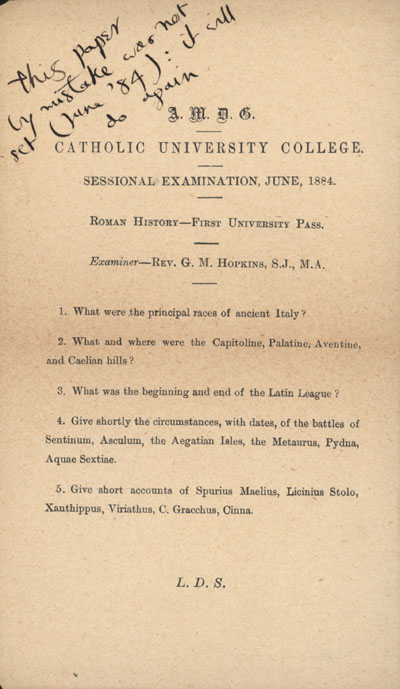 As UC Professor of Classics, Hopkins was responsible for lecturing, tutoring, and examining, as well as preparing students for the national examinations administered by the RUI. Letters exchanged among examiners indicate that Hopkins had to learn to meet deadlines and work efficiently. His note on the exam states: “This paper by mistake was not set (June ’84): it will do again.” 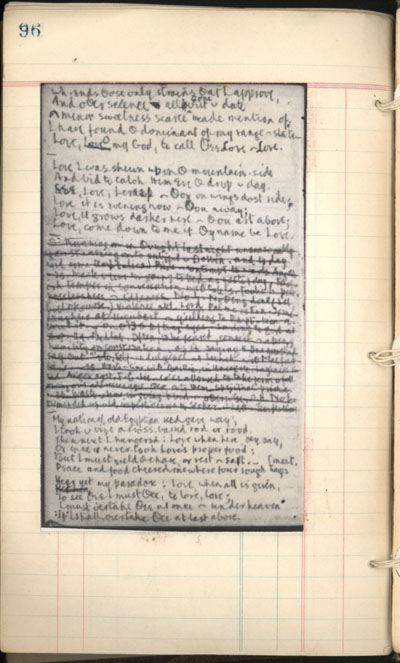 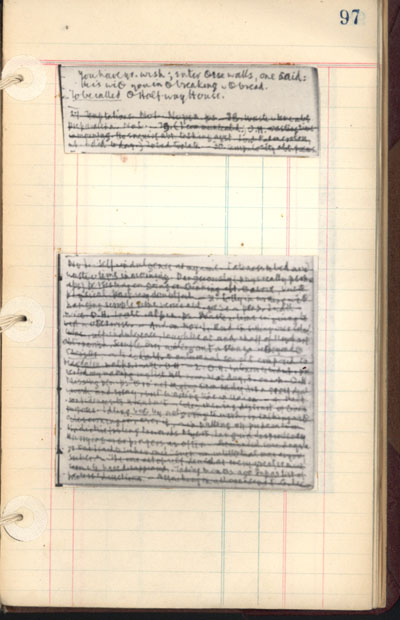 In his first three years at Oxford, Hopkins used small (4.9 x 2.9 in.), pocket-sized diaries to record personal and academic memoranda, make preliminary sketches, and draft poems. In March 1865, however, his Anglican mentor, Henry Parry Liddon, a follower of John Keble and Edward Pusey (major figures in the Tractarian or Oxford Movement) and supporter of “High Church” practices, encouraged Hopkins to keep a record of his daily “sins,” and to avail himself of auricular confession. The lists were cancelled after Hopkins met with and “confessed” to Liddon or Pusey. When the diaries were originally published in Journals and Papers (1959), the confessional notes were omitted. Facsimiles of CI and CII were included in Norman MacKenzie’s edition of the Early Poetic Manuscripts and Notebooks (1990); they will be published in full in the Collected Works of Gerard Manley Hopkins, vol. iii. 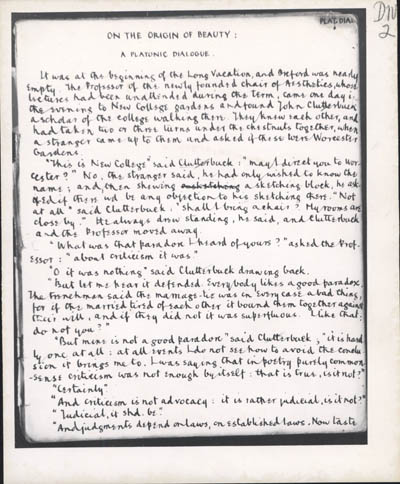 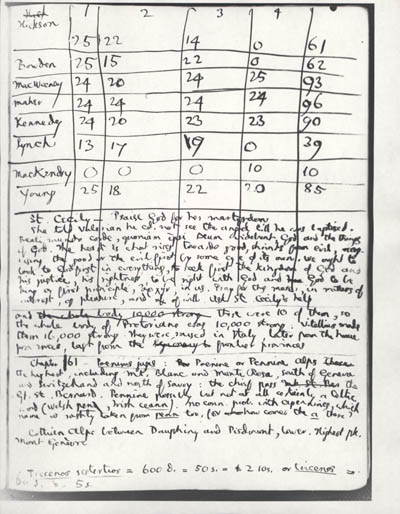 Before 1884, Hopkins routinely kept multiple journals and notebooks to organize and administer professional, personal, and spiritual matters. Diary-like entries were made in small journals (such as CI and CII; see items 45 and 46); academic work was accomplished in specially-assigned notebooks (see 47); copies of poems were carefully preserved by Bridges; sermons and religious writings had their place as well. Moving to Dublin in February 1884, however, changed everything. Compositional protocols no longer obtained, as this notebook gives witness: more than half of its pages haphazardly include teaching outlines; religious meditation notes; poetic drafts; pages in which he tallied exam marks and commented on students’ performances; intermittent musical jottings; lists of correspondents to whom he owed letters; a commentary on Cicero; drafts of a short biography of Richard Watson Dixon; and various practical memoranda.

Fol. 20r features an attendance record for UC students; a meditation on St Cecilia (feast day, November 22); and the continuation of notes on ancient Roman history and currency.