Fr. Julius Jette as a Linguist

Fr. Jette became the only white man to have mastered the Koyukon Language. In his biographical sketch of Fr. Jette, Fr. Renner mentioned that: "whatever Jette did, he did exhaustively." Fr. Jette studied the vocabulary and language of the Ten'a exhaustively. He wrote seven volumes for his Koyukon to English Dictionary; inside the seven volumes he included precise and perfect drawings to demonstrate certain nouns and objects unique to the Ten'a Natives. His exhaustive collection of elements of the Ten'a language are highlighted with the fact that words beginning with the letter "t" span 731 pages. Fr. George St. Hilaire, S.J., in his article titled: "Julius Jette, S.J., Language and Ethnology Scholar of the Yukon," described Fr. Jette and his precise work. Hilaire states: "His mind was so perspicacious and methodical that he was able to do what no other missionary could do: become the complete master of the tongue. In fact, he knew it so well, that his knowledge surpassed even that of the most fluent among the natives." 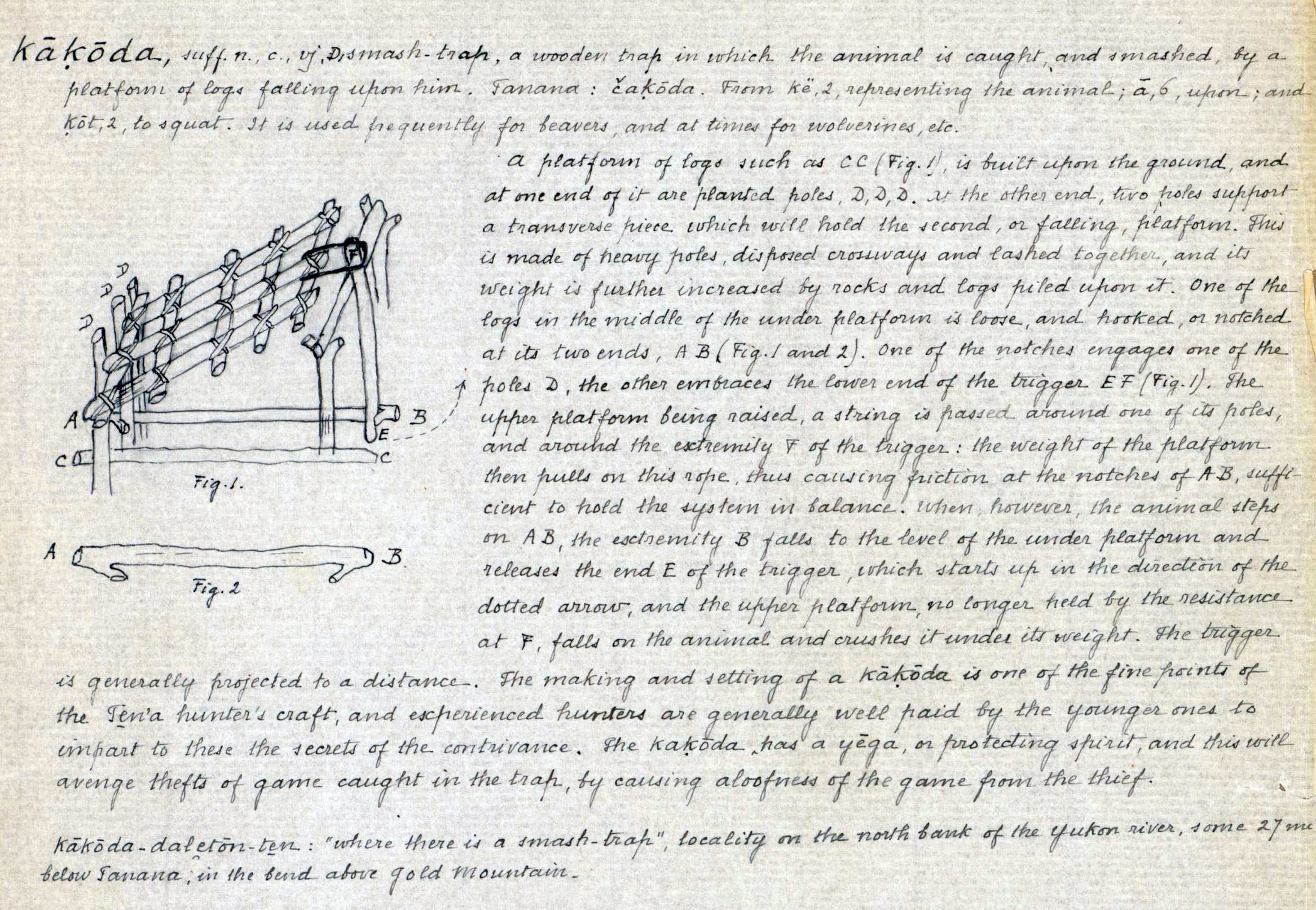 An illustration from Fr. Jette's Dictionaries.

Fr. Jette had pocket sized notebooks (shown below), in which he would quickly write down any sort of new words, difference in dialects and abnormalities of the Ten'a language. He would then carefully incorporate these field notes into his manuscripts. This particular notebook outlines the shape and use of midoria, which is a type of boat. The polished and meticulous drawing of a midoria is showcased under "Illustrations from Volume III of Koyukon-English Dictionary" on this page. The comparison of his notes and the final product of the dictionary displays Fr. Jette's eye for precision and detail, when it came to his scholarly work. 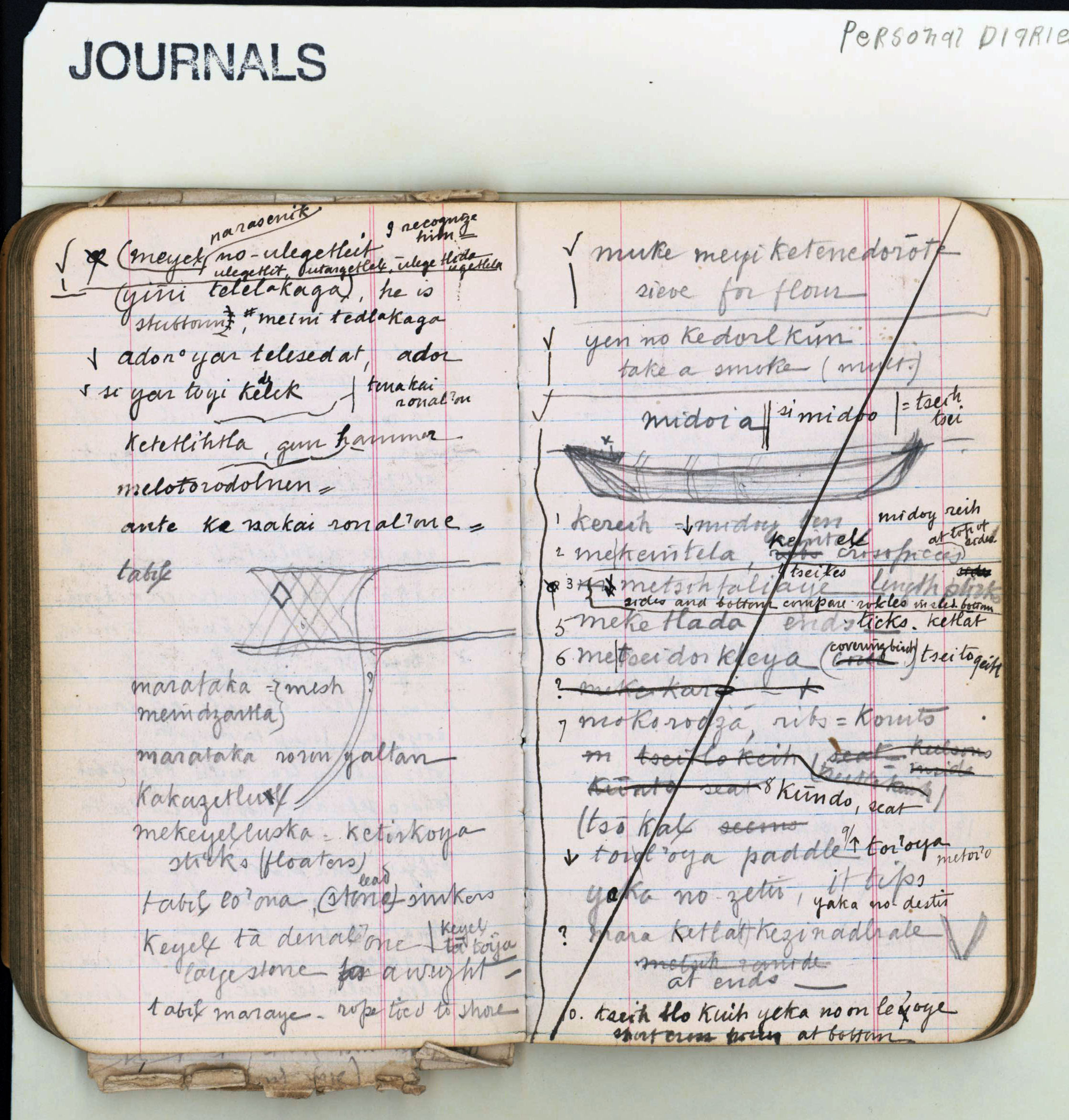 Fr. Jette's Koyukon-English Dictionary spans seven volumes with 2,344 handwritten pages, he included more than lists of vocabulary words and it serves as the representation of the culmination of Fr. Jette's language studies. His dictionaries exist in an encyclopedic form that captures the whole culture of the Ten'a. Fr. Jette included precise drawings that demonstrate the ethnographic nature of his dictionaries. Fr. Robert Sullivan observed the elaborate work of Fr. Jette, when he commented: "when one carefully studies the manuscript, he is astounded at the patience and keenness of intellect that lie behind it." This manuscript served as the basis for the Koyukon-Athabaskan Dictionary by Eliza Jones (it gives authorship to Fr. Jette as well) published in 2000 by the Alaska Native Language Center, University of Alaska Fairbanks. 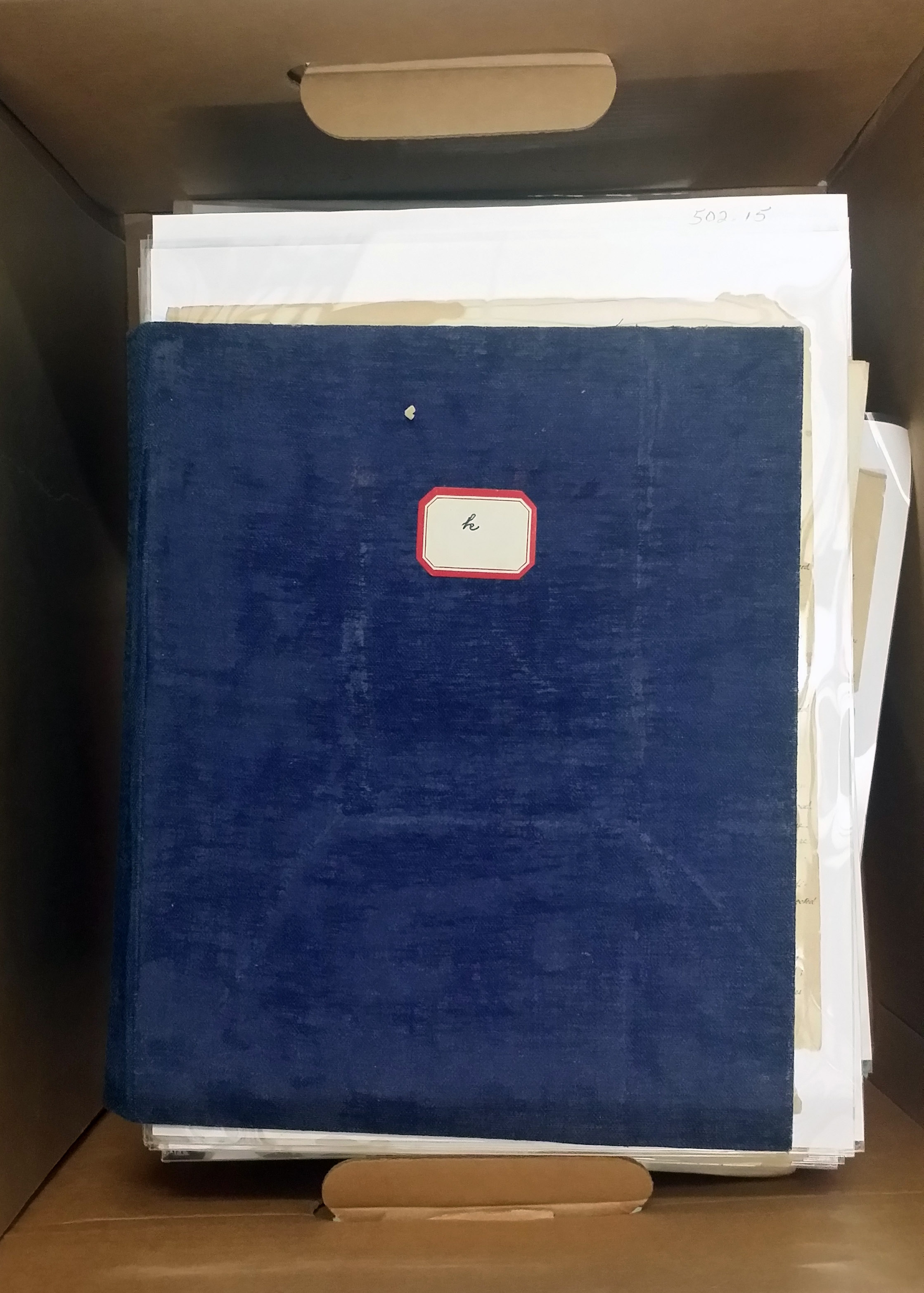 Scanned illustrations from all seven volumes demonstrate the ethnographic and encyclopedic nature of the dictionaries. The detailed sketches provide a visual for the work ethic and precision of Fr. Jette.

Fr. Jette worked tirelessly to collect vocabulary words and their meaning. He carried around small notebooks that he could jot down different words or meanings into, and then he would transcribe them neatly back at his cabin. Fr. Jette's dedication to the Ten'a language is portrayed through the detailed definitions and words listed throughout the seven volumes.

Fr. Jette's knowledge of Koyukon was an applied understanding, and the following texts demonstrate the application of his understanding and skills. The texts displayed demonstrate how Fr. Jette used his language skills to either better his scholarship or his missionary work. In addition, any onlooker can view the effort and care that Fr. Jette took when he translated these texts into Koyukon.  "On' Ten'a Folkore" provides priceless information about Ten'a history, since the oral tradition served as the mythos of their society. 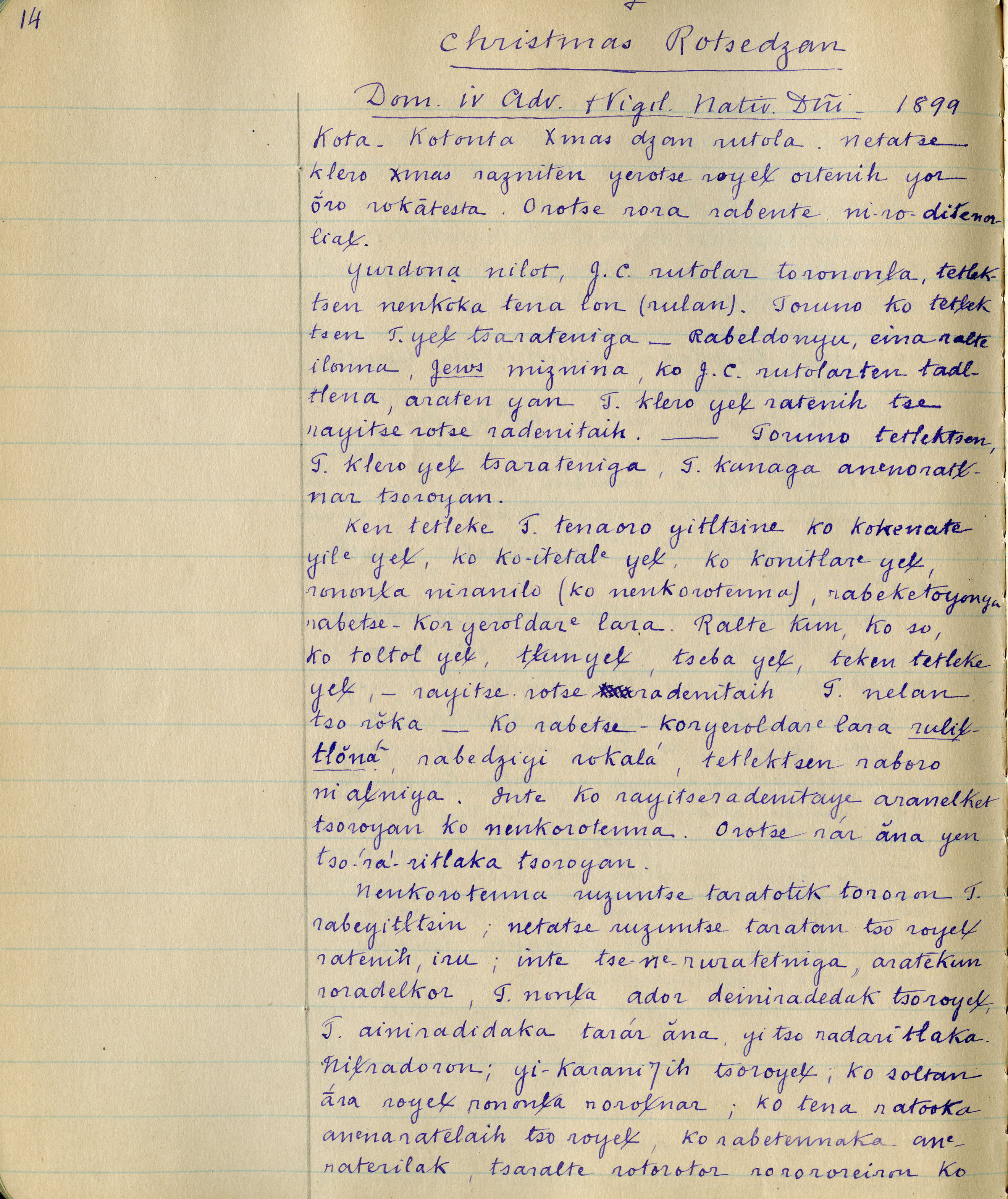 Fr. Jette translated catechisms, hymns, prayers of confession and other forms of religious texts into Koyukon. His care in precisely translating the documents into Koyukon from English demonstrates his dedication to his work as a missionary, as well as, his deep respect of the Ten'a and their language and culture.

Fr. Jette's "On Ten'a Folklore" was published in 1908-1909, by the Royal Anthropological Institute of Great Britain. The 85-page article included the stories of the Ten'a, which Fr. Jette heard and recorded. Fr. Jette explained that the stories included "present the mythology of the Ten'a and are intimately connected with what may be considered as their historical records. They are especially difficult to obtain, and the Natives are very reluctant to let them be taken down in writing. Story-telling is resorted to as an entertainment to pass the long winter evenings. The narrator winds  up his tale by stating that he has 'shortened the winter."'

To show case Fr. Jette's eye for detail and perfectionist tendencies, the handwritten manuscript and the final published article have both been included. The cover for the published version of "On Ten'a Folklore" and "On Medicine-Men of the Ten'a" have been included in the beginning of the document to show case the publication of this particular manuscript.

After only studying the Ten'a language for seven years, Fr. Jette had a rough sketch of his dictionary and his grammars. The construction of the grammars serves as a showcase for Fr. Jette's understanding of the mechanics of the Koyukon language.

The excerpts added below demonstrate Fr. Jette's patience and keenness for detail. Fr. Jette edited and revised his manuscripts in an attempt to make them perfect. 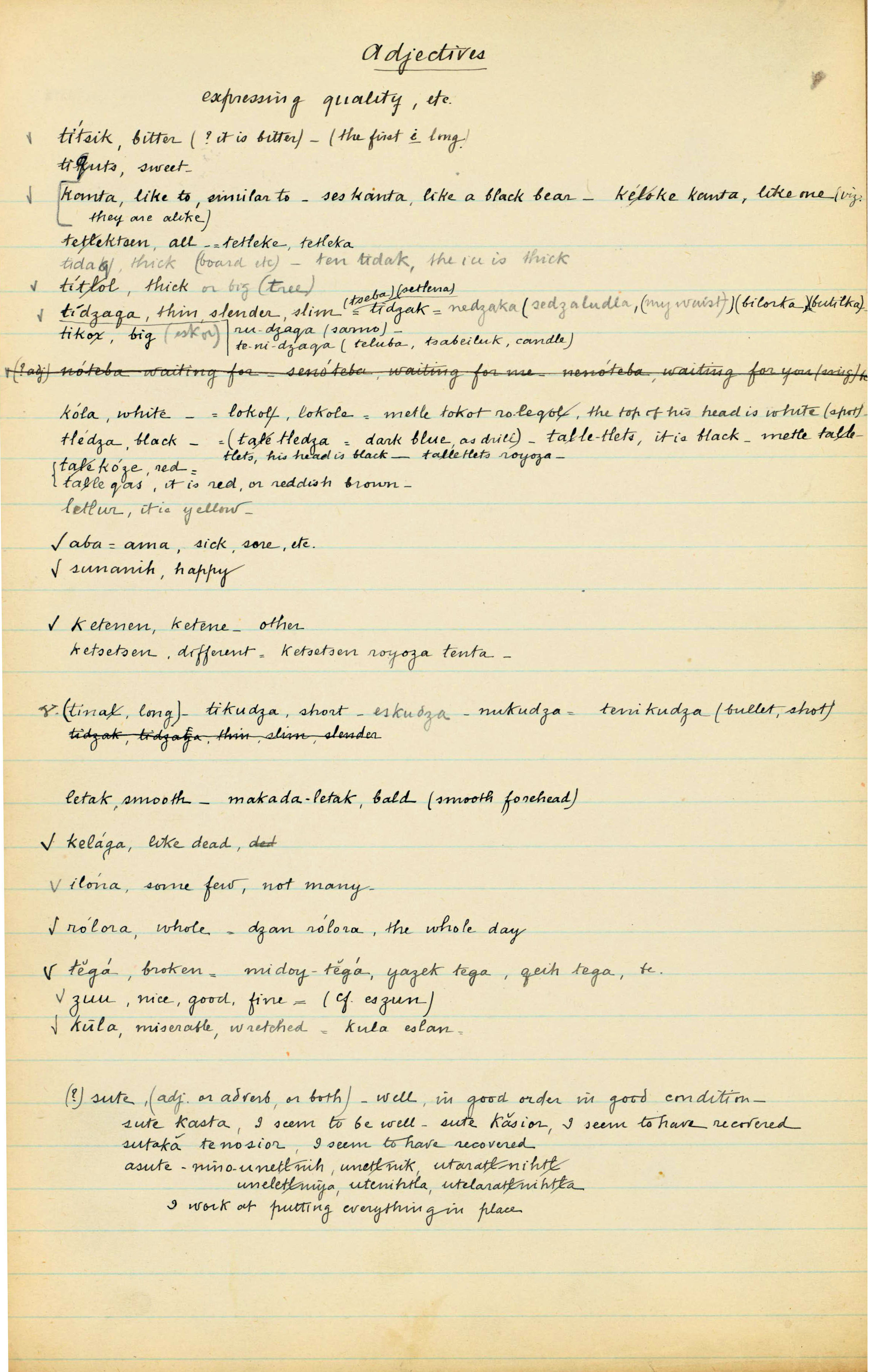 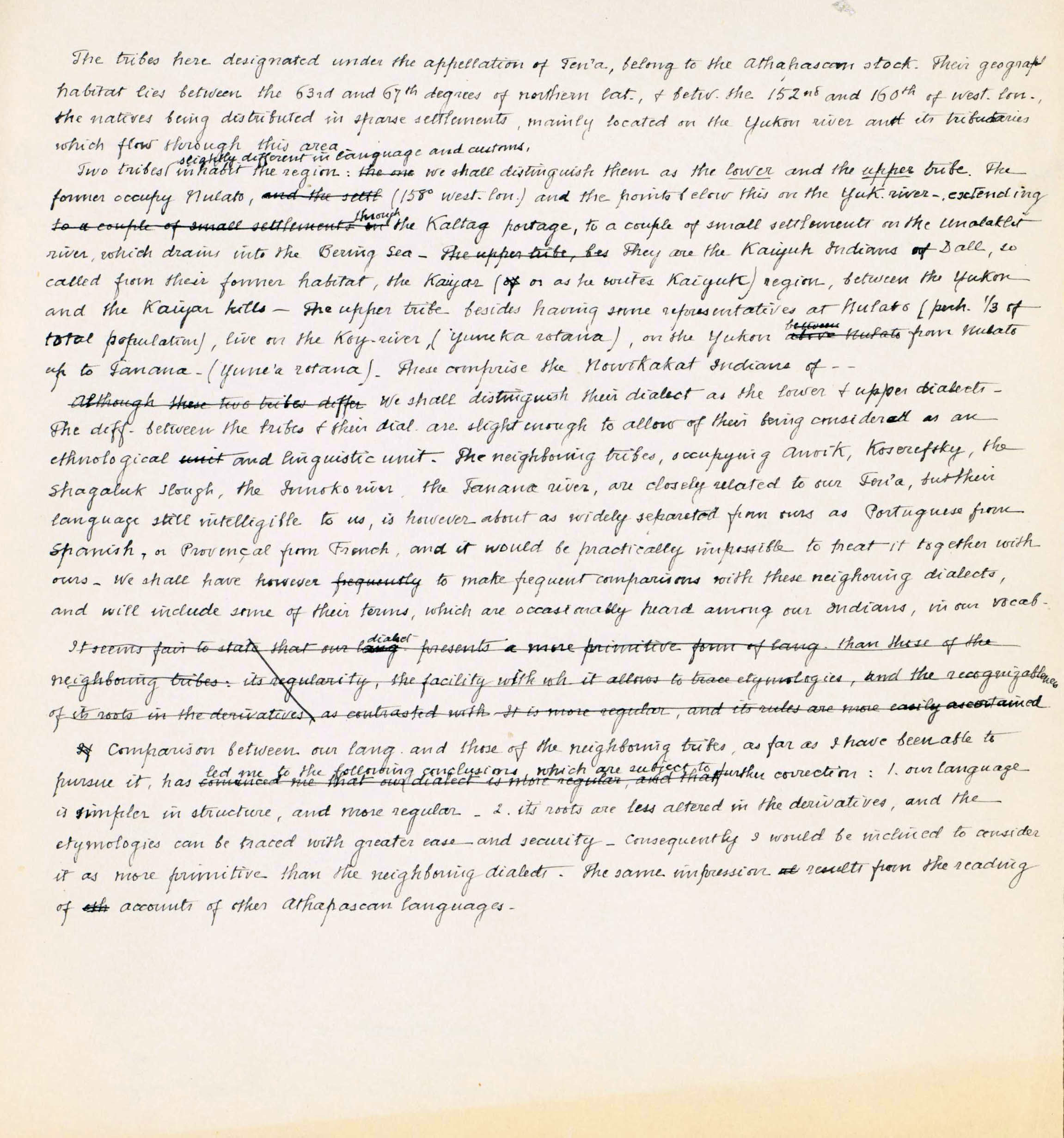 The following excerpts come from the multi-volume grammars that Fr. Jette produced.

In the first set of excerpts, "Elements of Ten'a Grammar," Fr. Jette provides information behind his logic behind producing this particular grammar. An index follows directly behind his introduction outlining the wide topics that this brief grammar would cover. Fr. Jette wanted to make this condensed version of a grammar that contains the most important features of the Koyukon language.

The following introduction is the final version the introduction included in the overview of this section. Fr. Jette details a short history of the Ten'a people and the formation and movement of their language. Following the grammer are excerpts that showcase Fr. Jette's precision when it came to the understanding of the Koyukon language and his ability to take his knowledge to create many comprehensive grammar tools.

Fr. Jette completed his work of the particles on November 1, 1904. Fr. Jette explains that the 117 pages contains adverbs, conjunctions, prepositions, and interjections that could not be easily incorporated into his grammars.

In April 1907, the journal, Man, published the first part of his grammars under the title of "On the Language of the Ten'a." The published account included root nouns, phonetics, grammatical generalities and emphasizers. This particular source and some of his other ethnographic sources on the Ten'a obtained widespread attention in Europe.

Fr. Jette demonstrated his fluency of Koyukon through the production of his extensive dictionary and grammars. Fr. Jette studied language in general, which differed from his other Jesuit missionary counterparts that reached the fluency necessary to conduct missionary work. However, his studies of the mechanics of languages and the connections of Koyukon to other languages distinguished himself as a true linguistic.The following section highlights the intense, pinpointed study of languages all over the Northern America. Fr. Jette studied the role, usage, similarities and differences of constants in languages such as Koyukon and Navajo, but he also documented the history of mechanics, usage and spread of other languages such as Sanskrit and Russian. 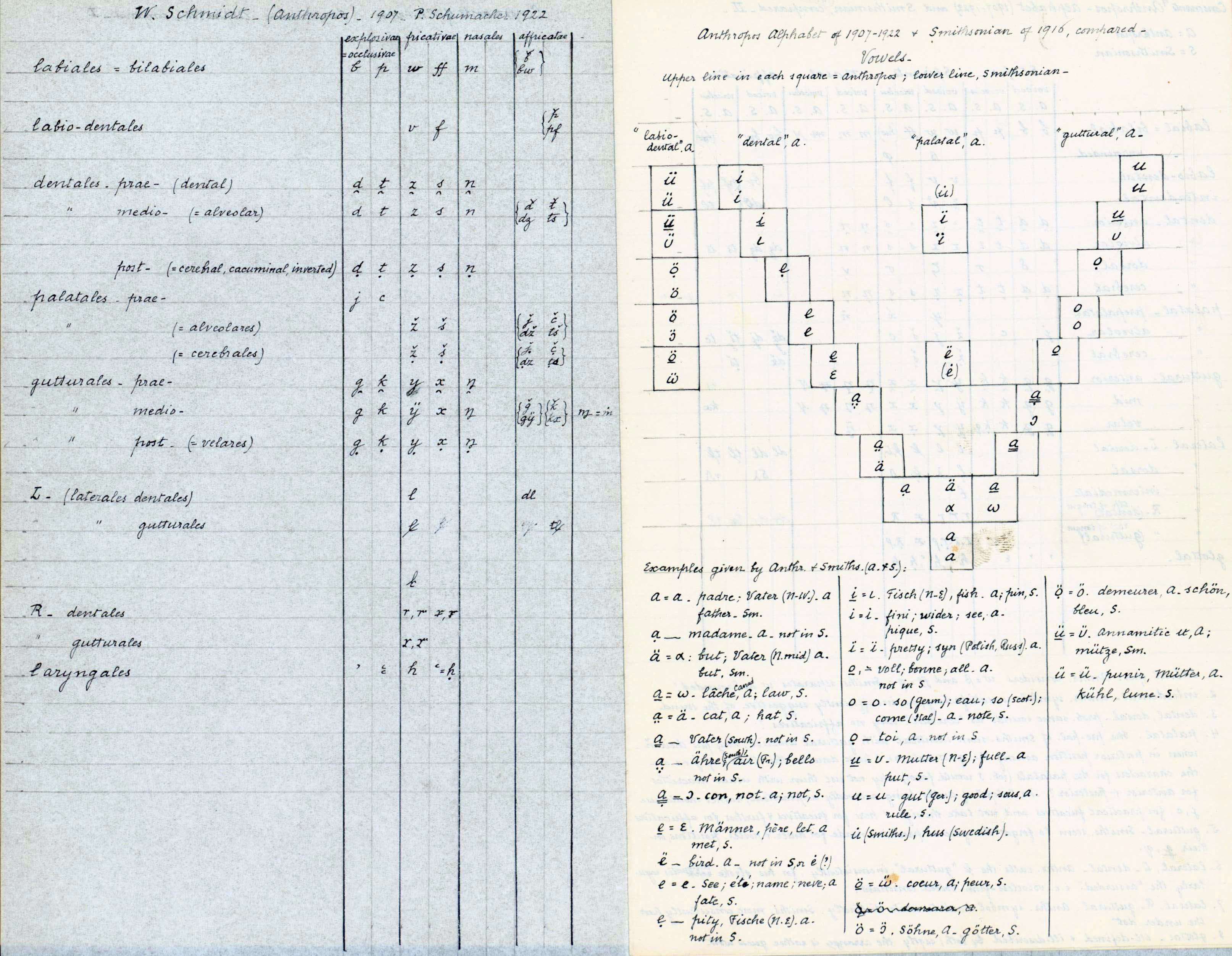 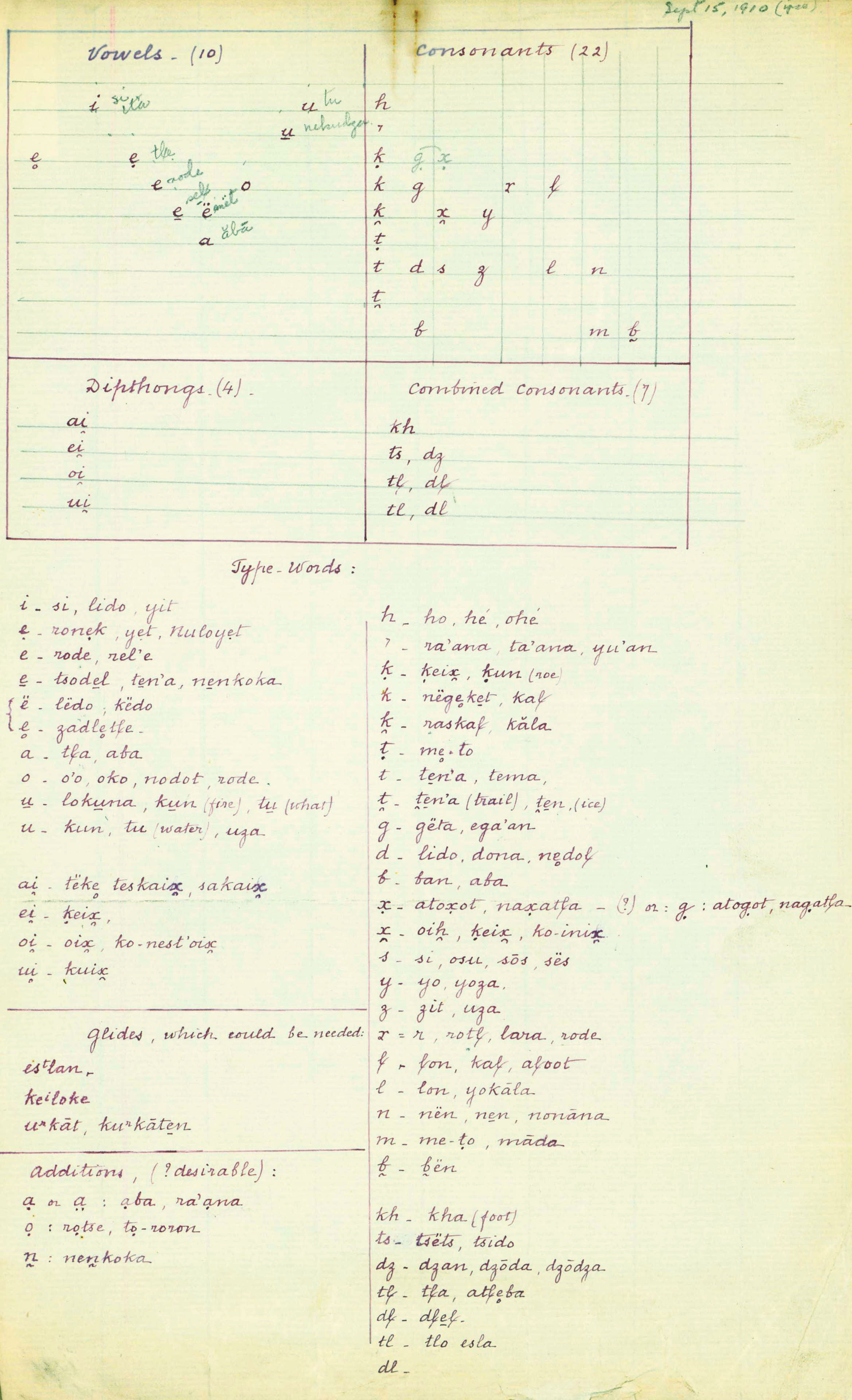 The following section includes Fr. Jette's study of the Koyukon Alphabet. Fr. Jette continue to work on his dictionary up to the end of his life, without publication, due to the challenge of alphabet transcription.

The entire "Grammatical Generalities" by Fr. Jette is included below. The document explains the history and connection of languages and the grammatical mechanics that carry over from one language to another.

The following manuscripts and article showcase Fr. Jette's work in recording languages throughout North America. The first, being a published article, focuses on the similarities and differences between the Ten'a Koyukon and Navajo. In the second article,"Linguistic Stock of the Americas," Fr. Jette looks at the roots and spread of language throughout North America. This particular manuscript demonstrates Fr. Jette's ability to combine different areas of study. In this case, he used his abilities to analyze history, anthropology and linguistics.