Fr. Jette as a Correspondent

Fr. Jette was an avid and reliable correspondent, not only for his Jesuit superiors, but also for other academics, Jesuit peers, and his family. It is a miracle that so many of his correspondences survived. It is rare for a large amount of correspondences of Jesuits to survive and remain in good enough condition for readability. Fr. Jette's correspondence include vital information about his missionary work and political disputes within Alaska. In addition, his correspondences demonstrate his humor, wit and intelligence. His correspondences are split up between two different categories. The first category details his fight against the Liquor Trafficking between Nulato and Kokrines. The second category contains general correspondences with his superiors and other members of the Jesuit Order. 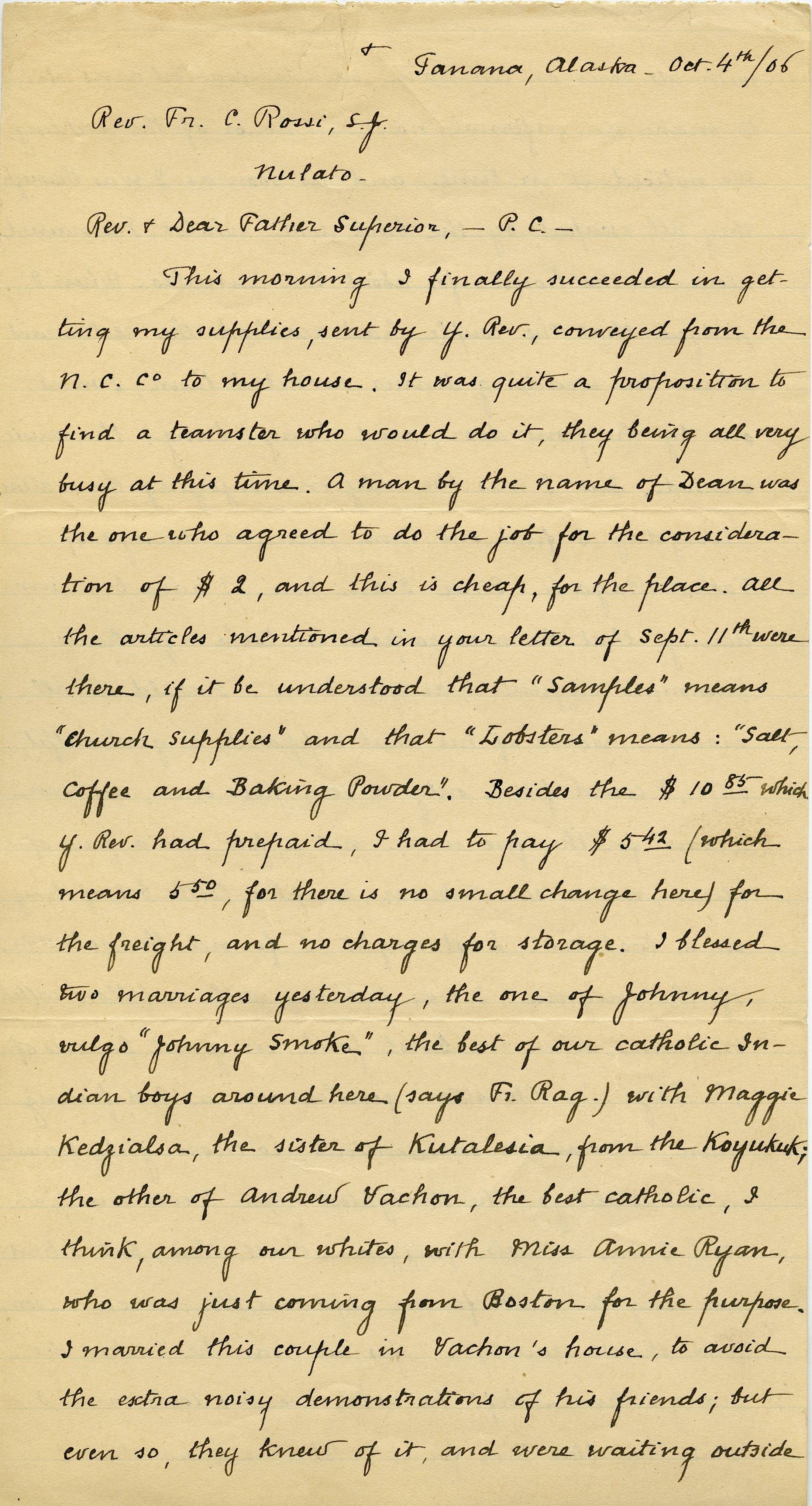 Fr. Jette zealous effort to have the liquor laws enforced demonstrated his dedication to the Alaskan Natives. Fr. Jette saw the negative effects of alcohol on the Native Alaskans and he feared for the health and well-being of the communities and their members. The documents in this section contain the descriptions of events surrounding the liquor trafficking problems, including Fr. Jette being asked to appear in court. 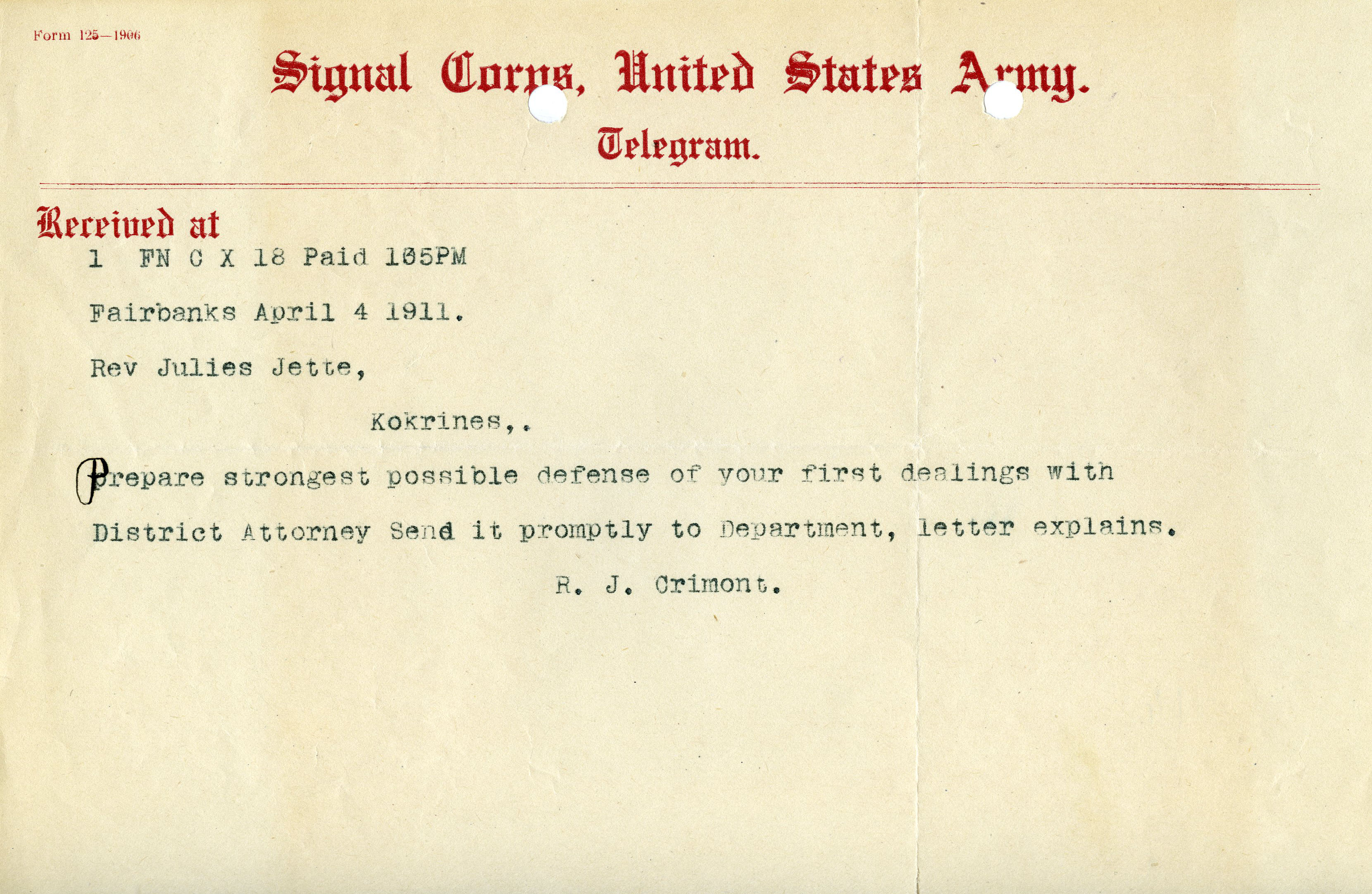 Samples of Fr. Jette's Correspondence with his Superiors 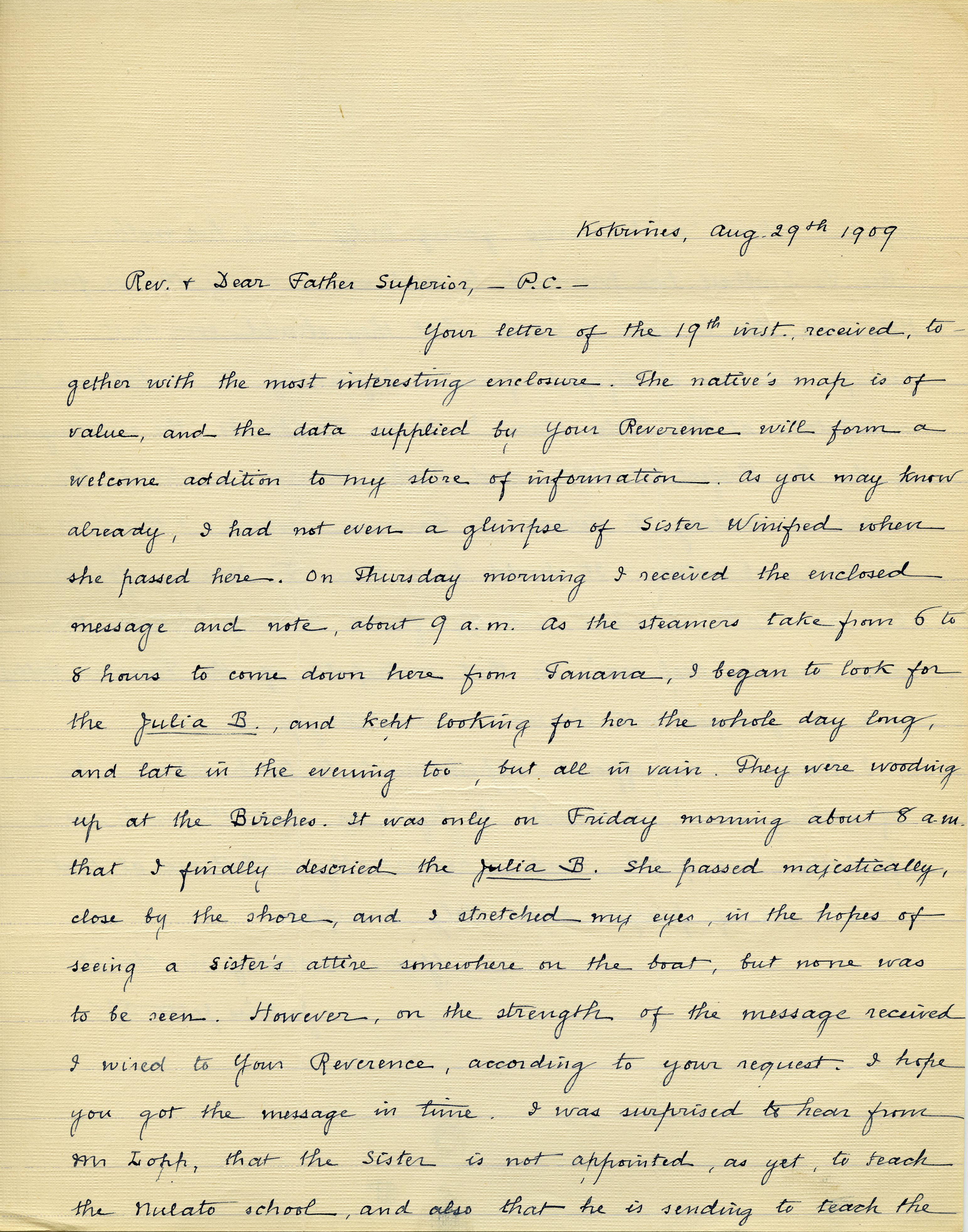 The correspondence from April of 1902 details Fr. Jette's departure from Nulato due to Fr. Cataldo's practices and management. He details that only himself and Fr. Rossi had the language ability to be transferred to another missionary site. He details that it is best for him to leave because he believed that it would be better for the Ten'a living in Nulato, since his presence reminds them of a happier time that has passed.

The correspondences from July 1902 details Fr. Jette's disagreement with the methods and practices of Fr. Cataldo when it came to interacting with the Alaskan Natives. Fr. Jette believed that Fr. Cataldo's methods seemed slightly archaic and made the Alaskan Natives look at the Jesuit priests as capitalists rather than Fathers, who care for their well-being.

The correspondences from July 1906, details the Ten'a Natives' apprehension  towards the Catholic Church. Fr. Jette writes about his sadness regarding the lack of attendance on Sundays, detailing that the church lacks a bell so he must depend on the Alaskan Natives' good will to attend church. The letter from 30 July 1906 details the actions and rituals of the medicine man and a log of the number of baptisms, confessions, communions and other religious activities.

In this correspondence from October 1906, Fr. Jette discusses the lack of supplies that he experienced in Nulato. He listed out the supplies that he had the ability to buy with their prices. A more interesting means of showing the depravity of the missions occurs when he discusses Fr. Ragaru's love of carpentry but the mission doesn't even have a saw for firewood.

The following correspondence gives details about the happenings at Tanana, such as Fr. Jette relaying to his superior that as soon as the river breaks enough he can return to Nulato. In addition, Fr. Jette demonstrates his scholarly nature as he discusses "the Geographical Dictionary of Alaska" and his request for some of his own manuscripts. This letter provides today's scholars with a representation of Fr. Jette's zeal for academia and studying.

The most intriguing aspect of the following correspondence is Fr. Lucchessi's view of Tanana. Fr. Jette details that Fr. Lucchessi "found himself 'between the devil and the deep sea,' in that metropolis of the Tanana valley and he jumped into the sea unhesitantly." Through this correspondence, Fr. Jette discusses the horrible state of Tanana. In addition, this correspondence shows Fr. Jette's wit and intelligence. At the end of the letter Fr. Jette writes about his appointment to teach and the possibility of only having one student, which he described as "a remarkably stupid one at that."

In the correspondences from February 1910, Fr. Jette corrected a report which detailed that the people at Kokrines were starving. Fr. Jette wrote the opposite saying that the hunters killed 17 moose and more than 6 caribou, they had actually begun to sell the meat cheaper due to having it in excess. In addition, he warned his superiors that the reports about Tenoyutlnik and Noidola'an being close to death might be false. Fr. Jette wrote about the Ten'a tradition to hunt, even though they have more than enough meat, which adds a ethnographic value to this correspondence.

In this particular correspondences, Fr. Jette explained his study of the alphabet which proved to be an intricate problem for his Koyukon-English dictionary and his other language studies. The correspondence includes Fr. Jette's work of categorizing the alphabets with different symbols to represent the different properties and uses of the letters. Fr. Jette displayed his scholarly nature within this correspondence as he used his knowledge and skills of French, Latin and English to compare the pronunciation and uses of the different letters in the Koyukon language.

The following sample contains two correspondences, one dated 11 February 1911 and the second dated 26 February 1911. In the first letter, Fr. Jette discussed possible ways to halt the flooding of whiskey into Kokrines and he briefly discussed his work with the alphabet key. One of his plans included him selling whiskey himself and being arrested. He would then use his arrest to plea that he cannot be punished because the other peddlers sell whiskey illegally and go unpunished. His other plan included him writing articles in America on the subject of illegal sale of whiskey because he stated: "I have made up my mind to struggle to the utmost, in order to have something done against the deluge of whisky which is flooding us from all sides." This particular correspondence demonstrated Fr. Jette's zealous want to protect the Alaskan Natives from outside exploitation and unfair treatment. The second correspondence focused on Fr. Jette's journey to court and the presentation of information in front of a jury, regarding the illegal sale of alcohol. Fr. Jette detailed the sentiment from the judge regarding his letter on the illegal peddling of whiskey: "The District Attorney showed himself seriously offended by my letter: he is a young man, and with youthful confidence believes that he can stop the hootch-peddling in a short time." Fr. Jette wrote that he remained strong within his conviction to stop the harmful exploitation of the Alaskan Natives through the sale of alcohol.

Fr. Jette detailed in this correspondence his fear of being away from Kokrines too long and his absence damaging the progress that he made. He discussed that the ruling of the Fairbanks court which reversed the ability to sell liquor by the bottle created a lot of excitement within the circle of missionaries. Fr. Jette wrote that two sets of Alaskan Natives live in Kokrines, the first group he believed were too corrupt to save and the other group of far less sinful Alaskan Natives that he feared would follow the downward spiral of the first group. This reasoning caused him to be eager to return to Kokrines to keep his hard work progressing in a positive direction and his absence could cause a negative regression, which would leave lasting impact on the mission at Kokrines.

In this correspondence, Fr. Jette discussed his successful Christmas service to his superiors, with 40 in attendance which was all the little chapel could hold. Fr. Jette explained that he was happy to be away from Kokrines for Christmas, due to the Alaskan Natives' means of celebration through drinking and dancing. He wrote that he felt like he was not doing any good for the Alaskan Natives within Kokrines, because the drinking habits and sinful acts keep growing worse. Fr. Jette's despair towards the dependency on alcohol by the Alaskan Natives demonstrated his desire and care for the Alaskan Natives, he desperately wanted to improve the lives of the Native Alaskans within Kokrines. He discussed that the town of Ruby had been filled with whiskey and he guessed only more would enter into the hands of the Native Alaskans. In addition, in an afterthought, Fr. Jette detailed that he had completed his "first writing" of the dictionary.

Fr. Jette detailed a setback that he experienced within his priestly duties. The midnight mass for Christmas was under attended by the Ten'a in Nulato. In addition, he did not perform any confessions or communions during the Christmas mass. Fr. Jette explained that the confessions that had occurred in the earlier weeks seemed to be done for show and not the for their intended and holy purpose. He wrote that Fr. Rossi noticed that individuals barely able to receive the Sacraments now eagerly approach the Holy Table even though they do not deserve to receive communion. Fr. Jette even discussed his consideration of returning to the Pre-Rossian idea of selecting a congregation to be the only ones acknowledged as Catholics. Fr. Jette wrote about the Koyukuk Station being overwhelmed with whiskey and the Ten'a people were divided by shaman feuds. Scholars today can look to these correspondences to gain an understanding of the lifestyle and the reactions of the Native Alaskans as they became a people in transition with the influence of traders, alcohol peddlers and missionaries.

In this correspondence, Fr. Jette wrote to his superiors concerning an excommunication of two individuals due to the scandalous nature of their marriage. Fr. Jette wrote that he still has yet to figure out whether the nature of their marriage; whether they have truly been wed, if they will divorce or merely separate. In addition, Fr. Jette continued to write that even if they separated another excommunication would occur due to their "living in concubinage." Fr. Jette also detailed the location of his manuscripts unpublished and published. Fr. Desjardins took them to Ruby with him, but if requested they would be sent back to Fr. Jette.

In this correspondence, Fr. Jette detailed that two Alaskan Natives are under arrest for murder. Taydenesltol, or "Koyukuk Old Toby Boy" and Kedzaludla or "Old Nicolai" are under arrested after being paid to cause the death of Sakadotli's wife, who then died in autumn following the transaction. Fr. Jette also demonstrated his language work by discussing the translated texts that he included in his correspondence, he even demonstrated his ability of the language by explaining his reasoning behind including the Kokrinian idioms.

Fr. Jette explained his work with the families at Tanana and he had to create a word for family. He explained that the Native Alaskans did not have good, moral outside influences especially in the case of the Army and the traders. Fr. Jette discussed that his interactions with an individual in the Army and then quoted the a song: "Some say the devil is dead, and buried in Killarney, but some say he rose again and 'list in the Army." Fr. Jette also relied information regarding prostitution within Tanana and the reasoning behind the promiscuous women's activities.