UASC's Believe It or Not: Oddities, Rarities & Treasures from the Foley Vault: Case 3 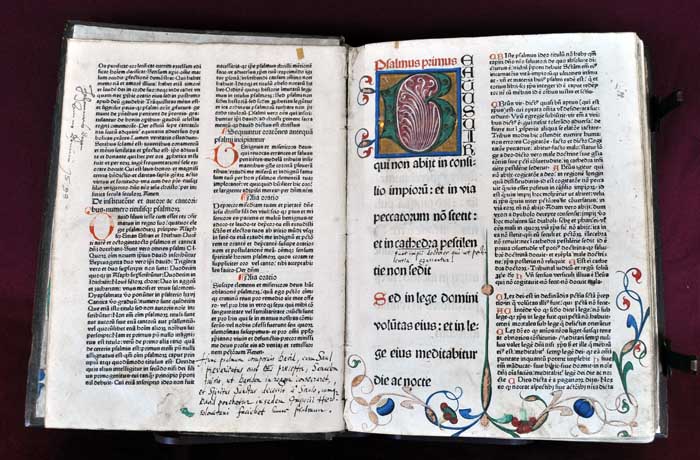 This Psalter, the Book of Psalms with commentary, was commissioned and edited by St. Bruno, Bishop of Wuerzburg, Germany. It was printed by Reyser on one of the very first printing presses to use moveable type. There is evidence to indicate that this copy was the first completed copy of the edition, which was presented to Bishop Bruno and bears his handwritten notes in the margins. The original binding of leather and boards has been backed with illuminated end papers dating from the 13th or 14th century. 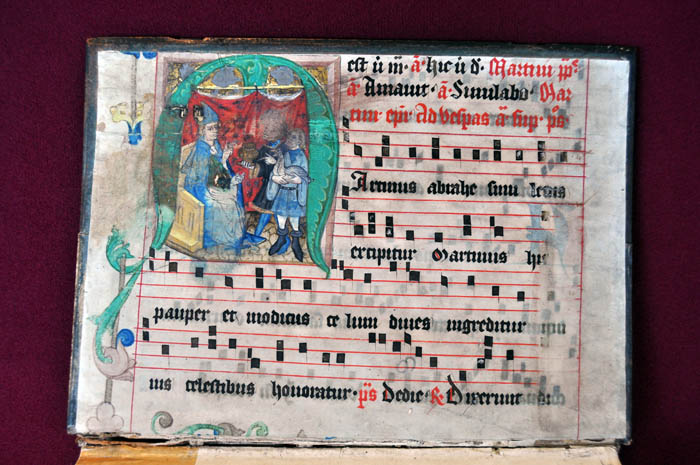 Inside cover of the Bruno Psalter 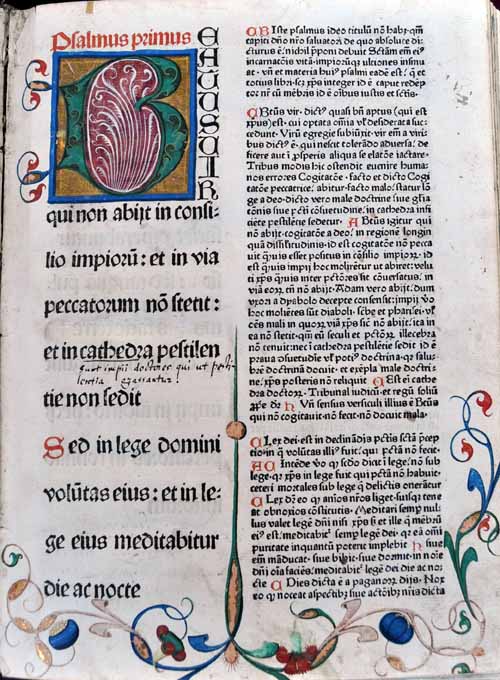 A single page of the Bruno Psalter 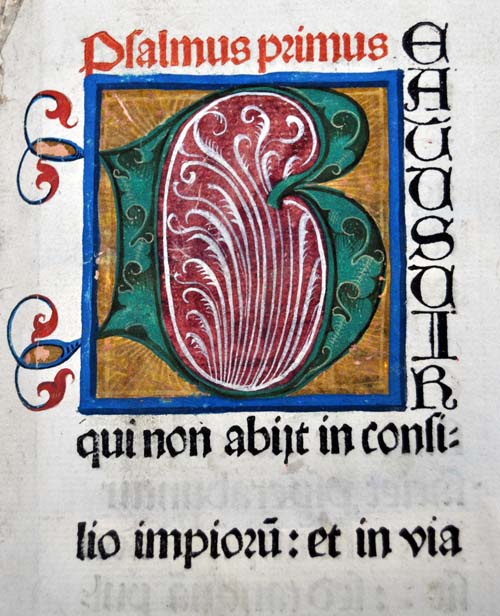 Detail of an initial from the Bruno Psalter, beginning the Psalmus Primus (First Psalm) 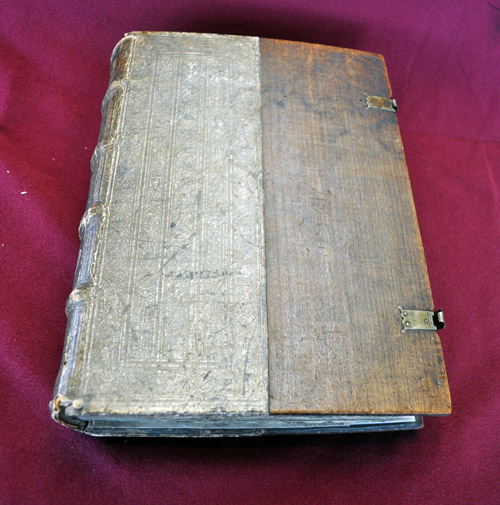 Wooden cover of the Bruno Psalter 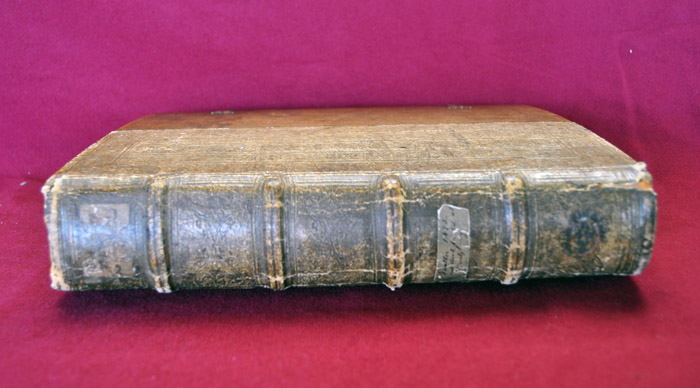 Leather and wooden binding of the Bruno Psalter 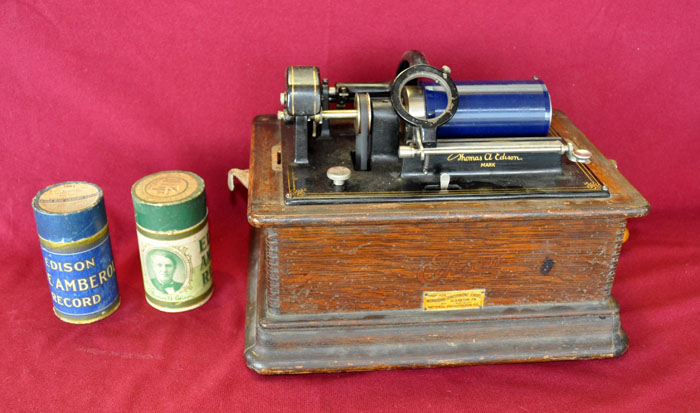 This model of the standard Edison phonograph was used by correspondence schools to teach students learning languages. It played two-minute recordings on wax cylinders, similar to the navy blue one currently on the machine. The black circular hole would have held a horn. Phonographs like this one were the first commercially available method for recording and reproducing sound.

The cylinder on the phonograph is an Edison Blue Amberol Record, which could play a four-minute recording at 160 rpm. This particular record was released in 1912 and played “Nearer My God to Thee” as sung by the Knickerbocker Quartet. Blue Amberol Records replaced the more fragile standard Edison Amberols, made of black wax and sold in green canisters like the one seen here, which plays “She Was Bred in Old Kentucky,” performed by Manuel Romain and Chorus. 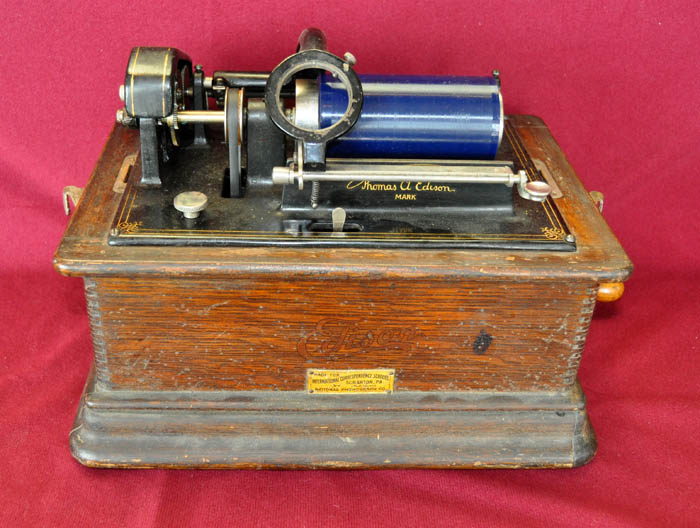 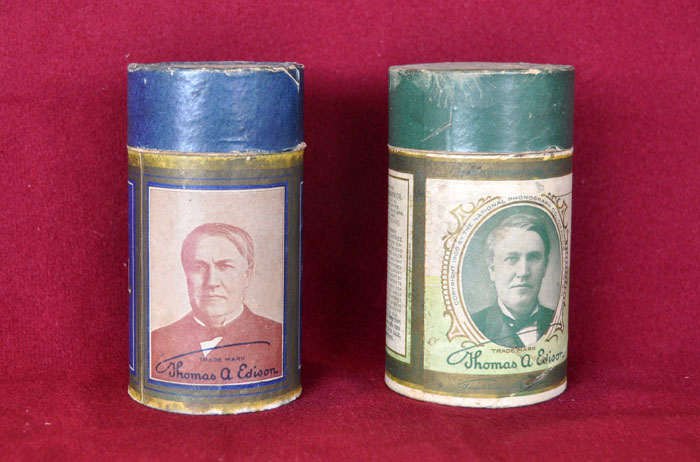 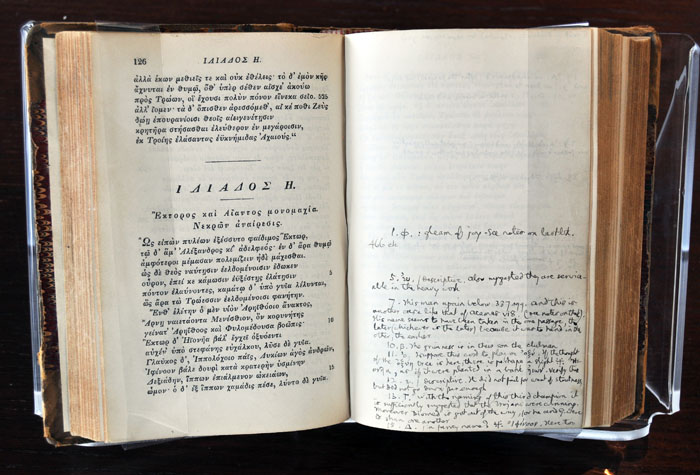 Homer’s Iliad was one of the prescribed texts for the Royal University of Ireland Greek B.A. “pass” and “honours” Matriculation examinations. Gerard Manley Hopkins’s marginal annotations can be seen at various sections in the book.

Gerard Manley Hopkins, S.J. (1844-1889) was an extraordinary poet.  After ordination in September 1877, he served in several different parishes throughout England and Scotland before accepting a dual appointment in Dublin as Professor of Classics at the reconstituted University College (UC) and Fellow of the recently-established Royal University of Ireland (RUI), an examining institution. Since the posthumous publication of his poems in 1918, he has been celebrated for his exceptional verse and prose; He also had gifts as sketch artist, keen observer of the natural world, and self-taught musician.

Gonzaga University owns one of the world’s largest collection on this poet.  Fr. Anthony Bischoff, S.J. (1910 -1993), a long-time member of Gonzaga’s English Department, began gathering Hopkins-related materials in the late 1940s while working on his dissertation for Yale University (Ph.D., 1952), but he collected widely until the early 1990s. After his death, his collection was added to the Hopkins Collection owned by Gonzaga University. 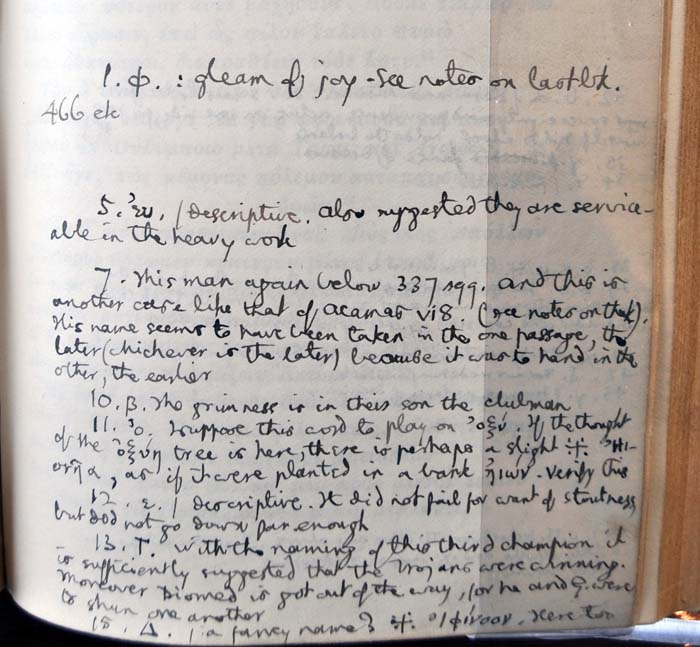 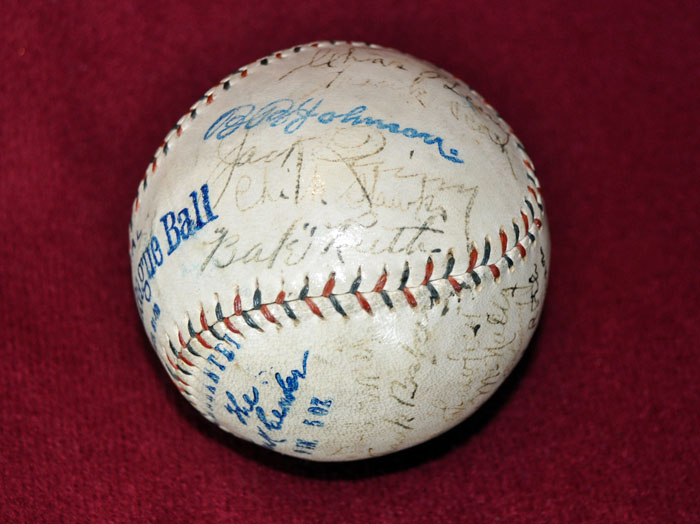 Babe Ruth was one of the Yankees to sign this baseball.  It was donated to Gonzaga by Mr. Maurice Goetchius in memory of Rev. Arthur Flajole, S.J., Chaplain of Gonzaga’s V12 Naval Training Program during World War II. 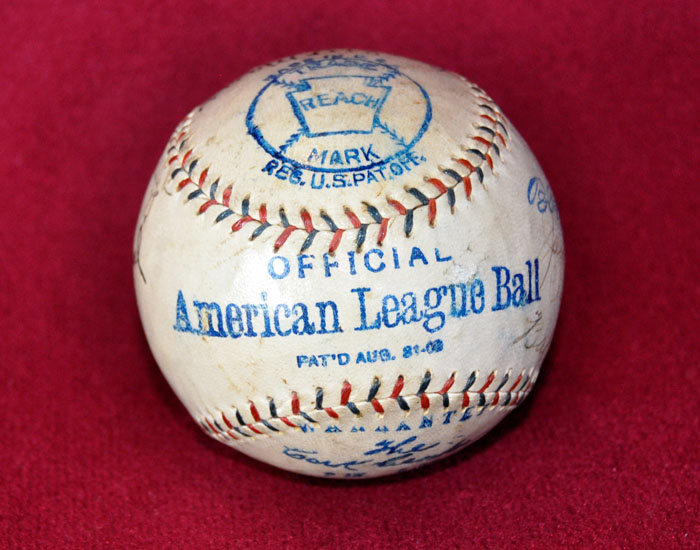 Robert Monaghan was given this knife and leather scabbard by Motohiko Takasaki, a Japanese naval commander and comrade of Monaghan’s. After Monaghan’s death during the Battle of Samoa on April 1, 1899, a statue was erected in downtown Spokane in his honor. The inscription on the scabbard reads in part, “He alone stood the fearful onslaught and sacrificed his life defending a wounded comrade, Lieutenant Philip V. Lansdale, United States Navy.” 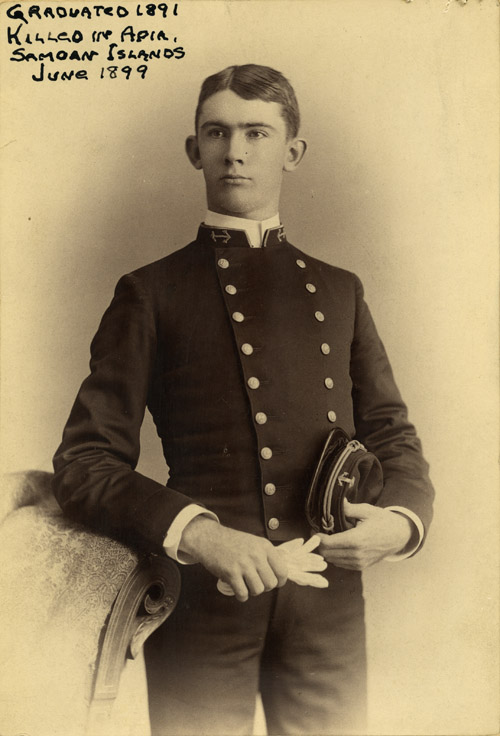 Ensign John Robert Monaghan was born in 1873 in Chewelah, Washington, and began his schooling at Gonzaga College on September 26, 1887, as one of the school’s first students. He graduated from Gonzaga in 1891, and in 1895 became the first Washingtonian to graduate from the U.S. Naval Academy.