UASC's Believe It or Not: Oddities, Rarities & Treasures from the Foley Vault: Case 7 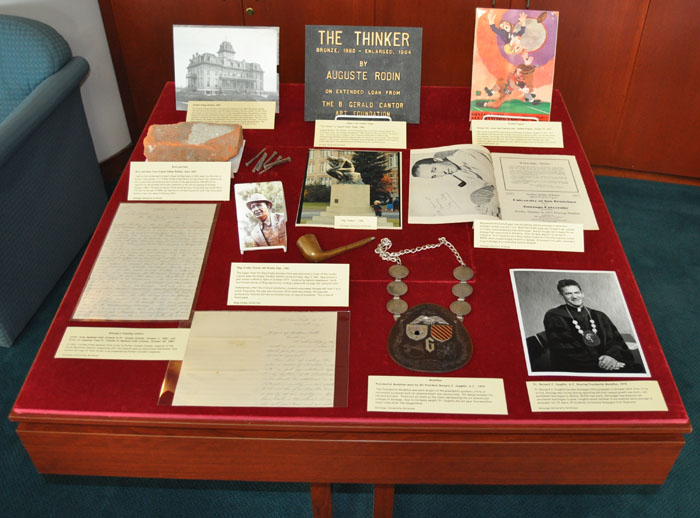 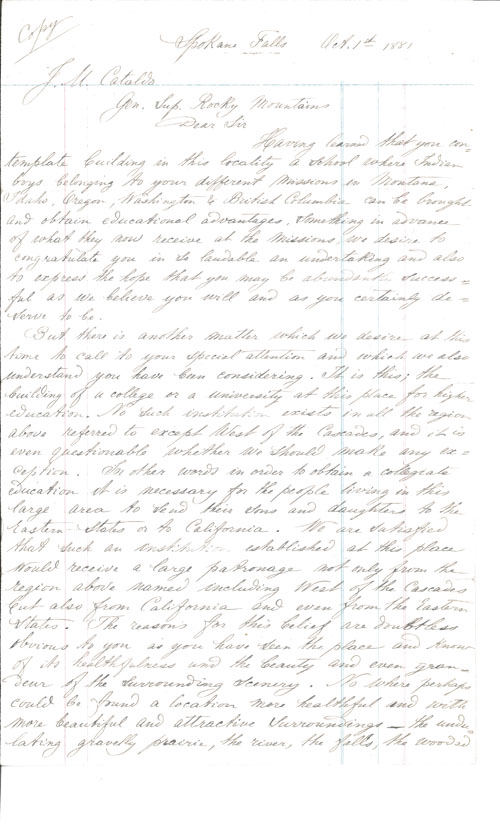 In 1881, citizens from Spokane Falls wrote to Father Joseph Cataldo, Superior of the Rocky Mountain Jesuits, requesting that the Jesuits open an educational institution. This manuscript copy of their letter is accompanied by Father Cataldo’s response. 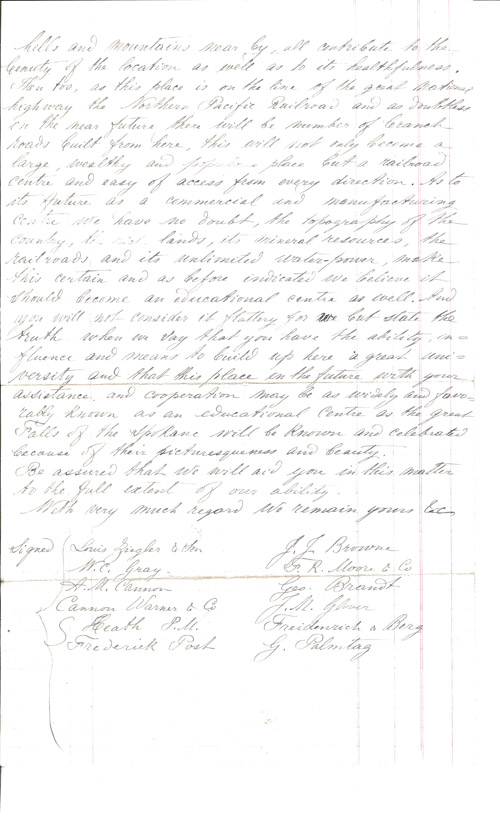 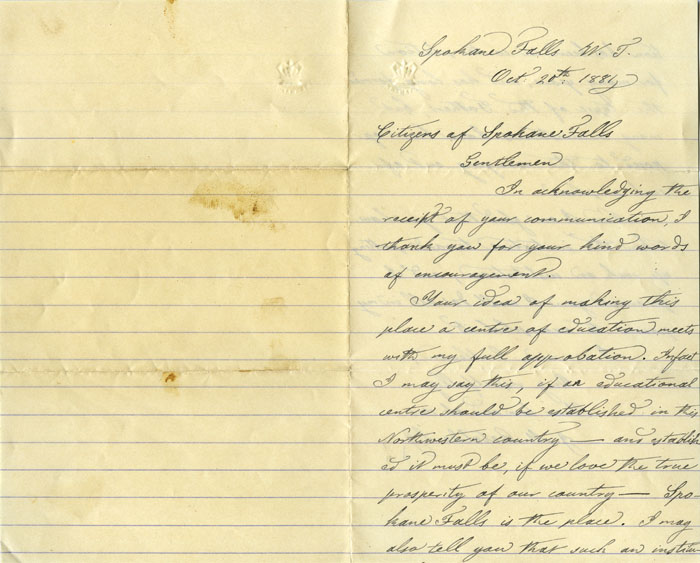 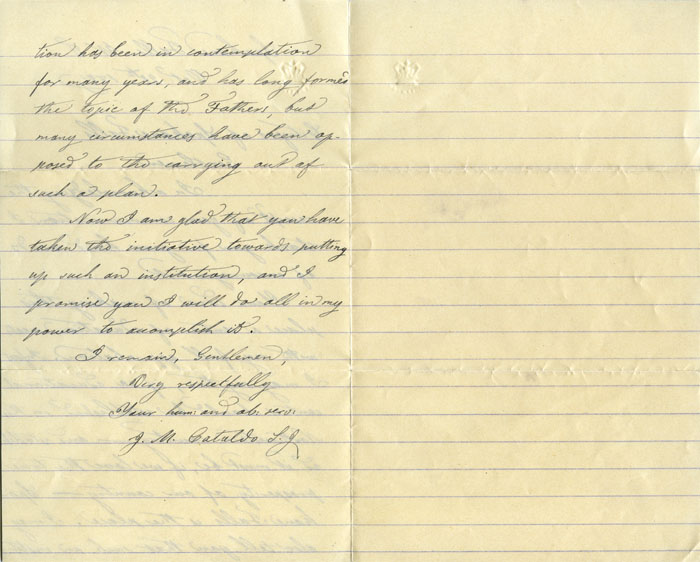 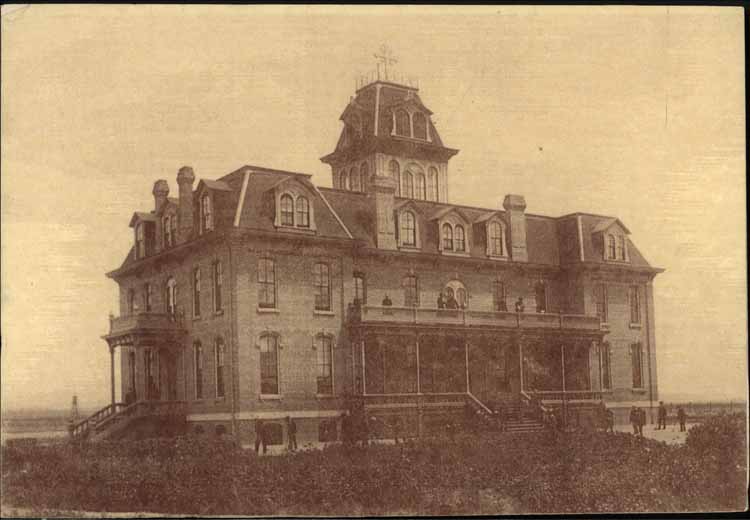 The Original College Building was finished for the 1887 September opening.  This two story brick structure was the largest building in the area, except for the County Courthouse. To save money and time, the bricks were made on site. The decision to build a large brick structure demonstrated the Jesuit’s confidence in their school and town.  The basement contained the refectory, the boys’ recreation room, and kitchen.  The first floor had 2 parlors, the chapel, the president’s room, 2 classrooms, and an infirmary.  The second floor contained 8 professor rooms, 2 large classrooms, the library, and bathrooms.  The attic with cupola was divided into 2 large dormitories that could house 40 boys.

Brick and nails from Original College Building, about 1883 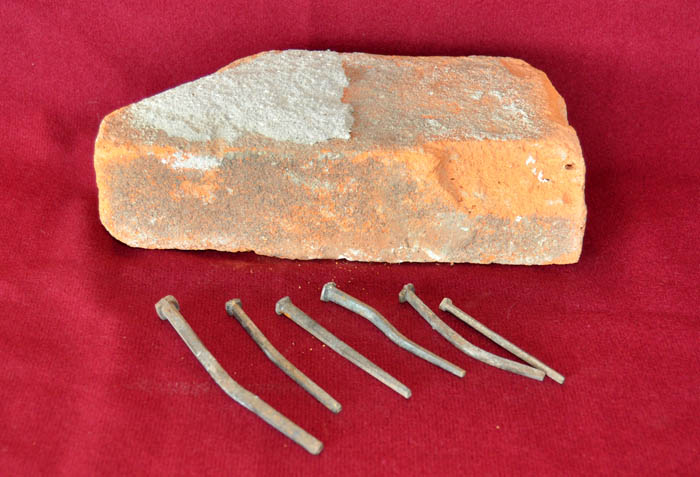 Construction on Gonzaga’s original college building began in 1883 under the direction of Father Urban Grassi, S. J. Father Grassi established a brickyard near the construction site to save time and money on the creation of the approximately 300,000 bricks required for the building, which was completed by the official opening of Gonzaga College in 1887. Through an arduous three-month process, the building was moved about 175 feet to the east in 1899, and remained at its new location for more than sixty years before it was torn down in February 1963.  This brick and nails came from the building. 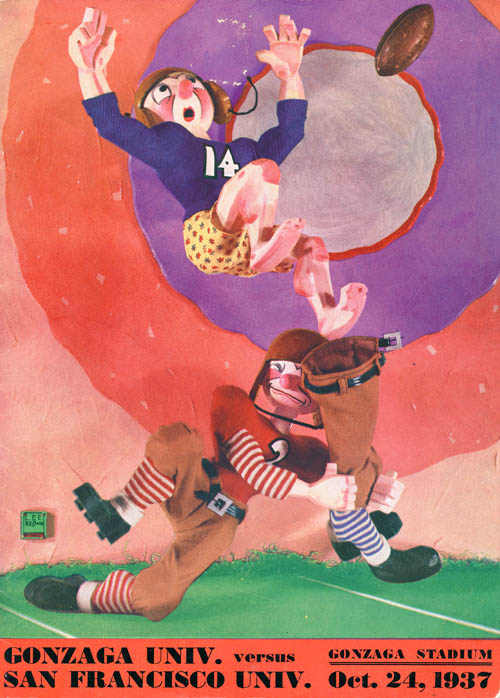 Bing Crosby attended this homecoming football game on Sunday, October 24, 1937.  This visit was the first time he had returned since leaving Spokane in 1925.  He received a warm civic welcome.  He brought with him several Hollywood entertainers to perform at various events during his four day visit. His former classmate and now football coach, Mike Pecarovich, made him the assistant coach.  Before the game started, Bing gave the football team a $1000 water cart. 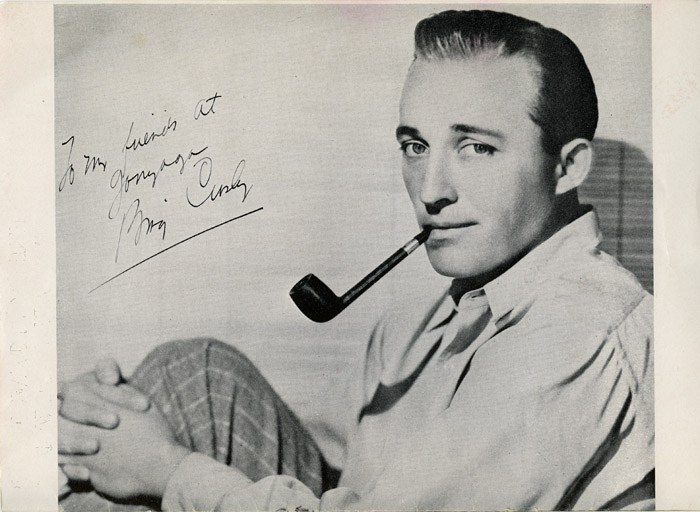 Bing watched the football game from the sidelines with his entourage of movie stars. Gonzaga’s football team lost, 7 to 0.  More than 12,000 people were on hand to get a glimpse of Bing Crosby, Connie Boswell and other movie people.  During halftime, the Gonzaga G club made Bing an honorary three-year letterman, giving him a blanket to mark his distinction.  And then, Bing led the glee club in singing the new Gonzaga fight song written by Bob Burns.  After the game, Bing left by rail back to Hollywood.  At his insistence and without fanfare he paid all of the trip’s expenses, around $5000, which included bringing his staff to Spokane.  All proceeds from public events were to go to Gonzaga into a scholarship fund for students. 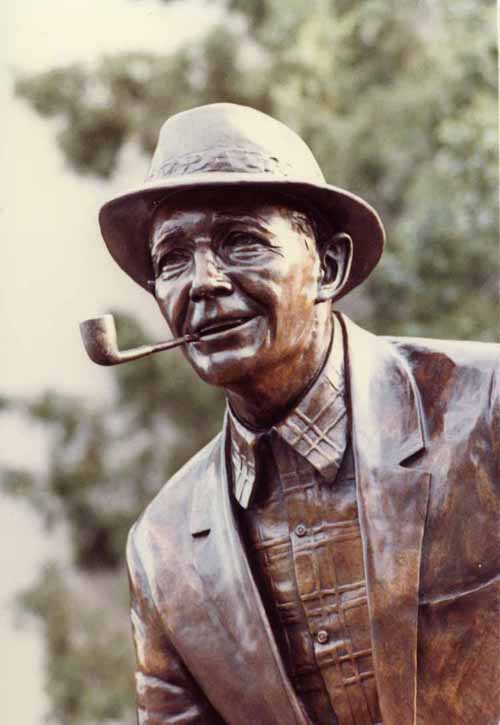 The bigger-than-life Bing Crosby bronze statue was dedicated in front of the Crosby Library (now the Crosby Student Center) on his birthday, May 3, 1981.  Bing died on a golf course in Madrid, Spain in October 1977.  Sculpted by Debbie Copenhaver, the 8-foot bronze statue of Bing depicts him striking a casual pose with his pipe, hat, and golf clubs. 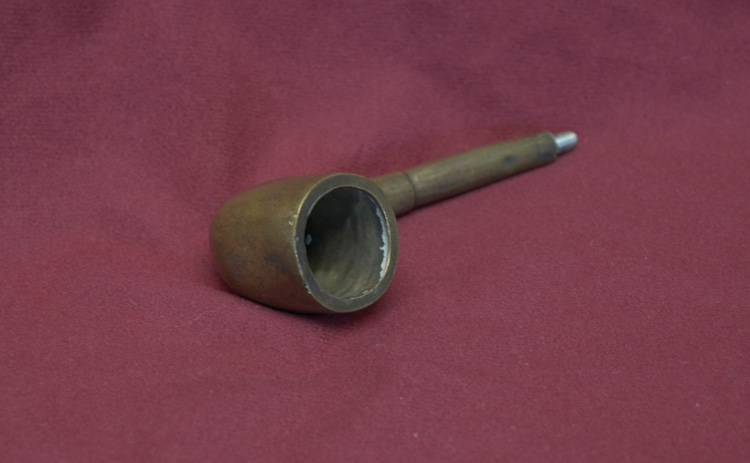 Immediately after the statue’s installation, students unscrewed the pipe and took it as a prank. Eventually, the pipe was returned. After numerous pranks, the pipe was permanently removed and now is attached only for special occasions.  This is one of three pipes. 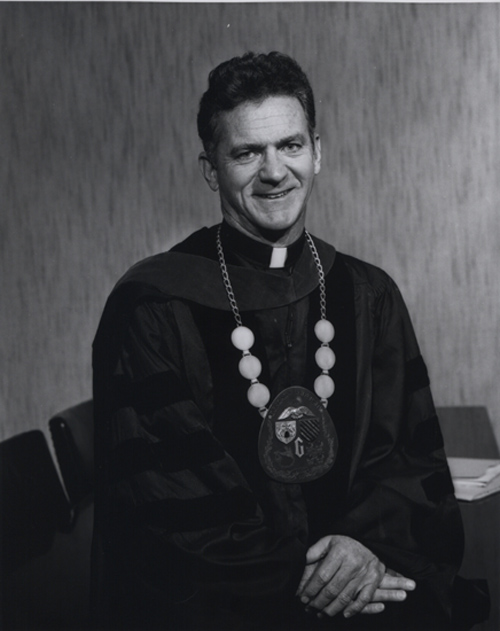 Fr. Bernard J. Coughlin became Gonzaga’s 23rd president in October 1974. Prior to his arrival, Gonzaga was facing soaring operating deficits; campus growth was static; and enrollment had begun to decline. Within two years of his arrival, the budget was balanced and enrollment had begun to grow. Coughlin would continue to successfully serve Gonzaga as president for 22 years. Afterwards, he became Gonzaga’s first Chancellor. 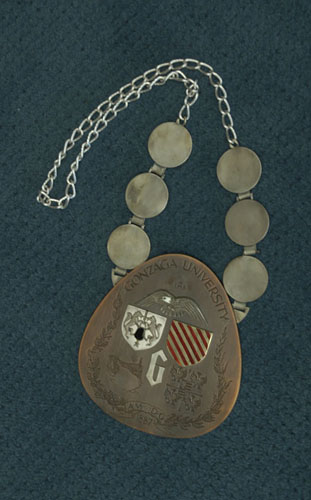 The Presidential Medallion was worn as part of the president’s academic attire at ceremonial occasions such as commencement and convocations.  Its design included the University’s seal.  There are six disks on the chain representing the six schools and colleges at Gonzaga.  Due to its heavy weight, Fr. Coughlin did not wear the medallion after the inauguration. 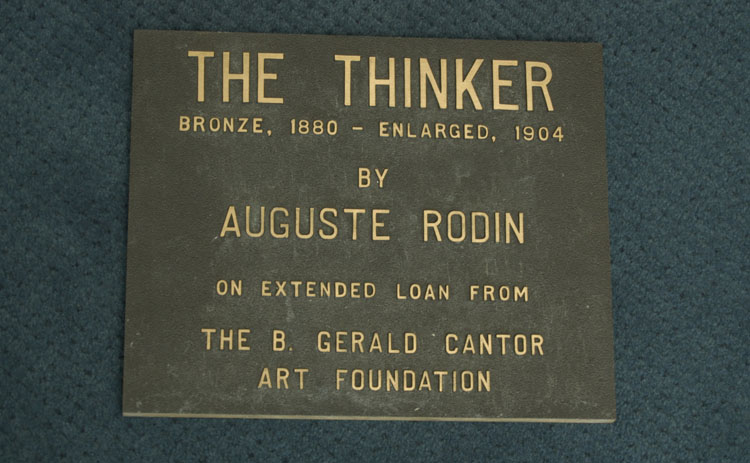 Auguste Rodin’s “The Thinker” was on extended loan from The B. Gerald Cantor Art Foundation from July through December 1st 1986 as part of the university’s Centennial Year.  The statue was on display in the Johnston Family Mall in front of the Administration Building entrance where today the Ignatian statue stands.  The “Thinker” weighed 1,700 pounds.  Several of the Rodin works remained on exhibit in the Johnston Family Mall and in the Administration Building during the centennial year. 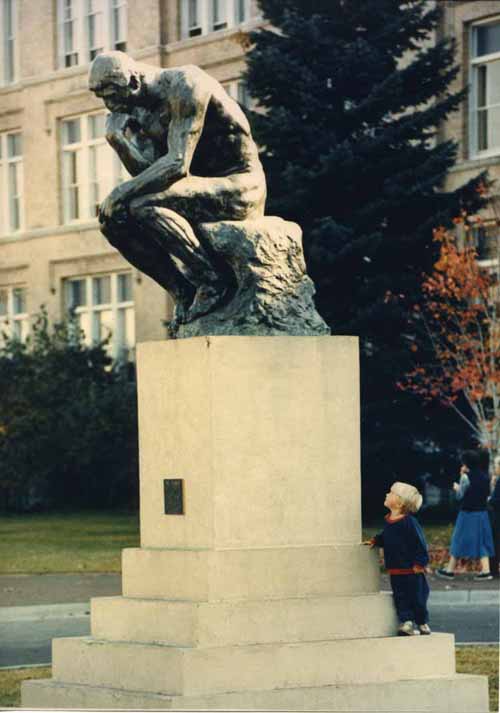