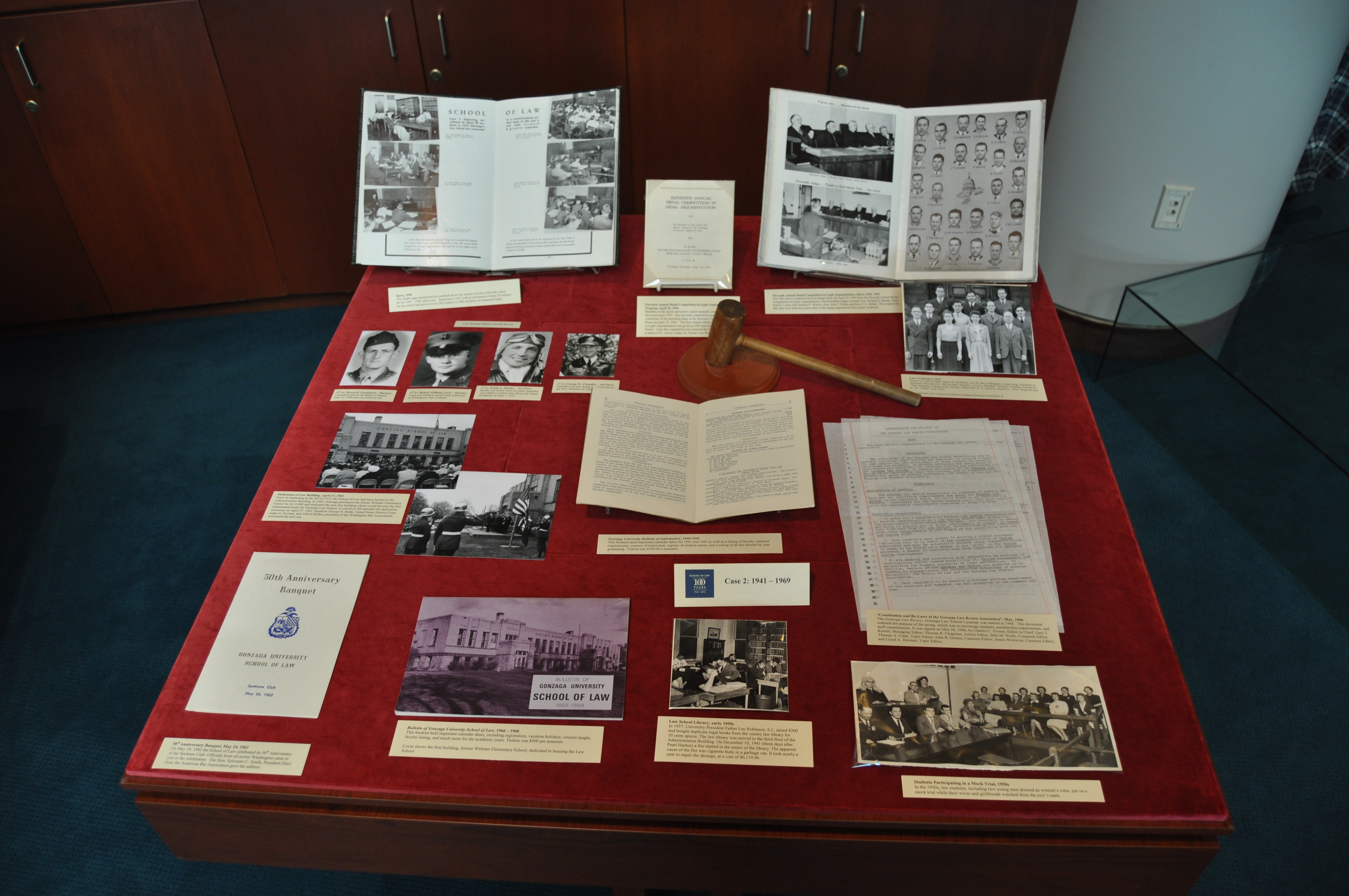 On February 21, 1951, the American Bar Association awarded the law school full approval of its application for accreditation.  By the fall of 1962, there were 127 law students, with only 3 women. 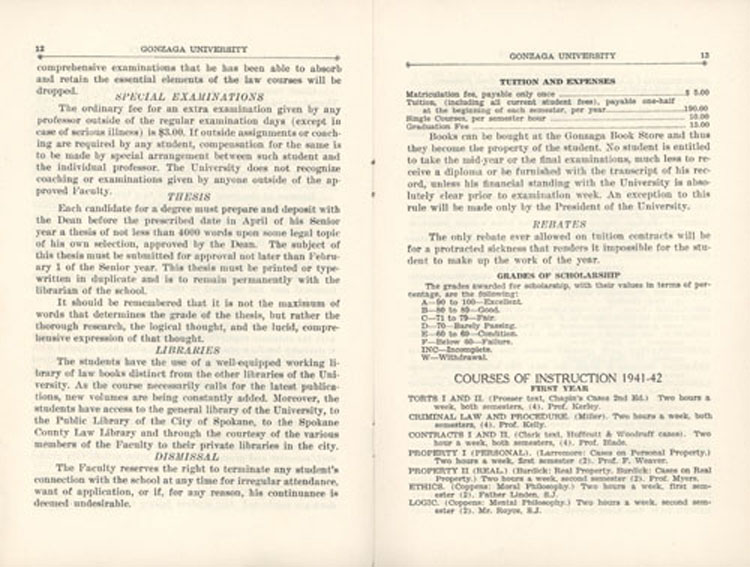 This Bulletin held important calendar dates for 1941 and 1942 as well as a listing of faculty, entrance requirements, courses of instruction, register of student names, and a listing of all law alumni by year graduating. Tuition was $190.00 a semester. 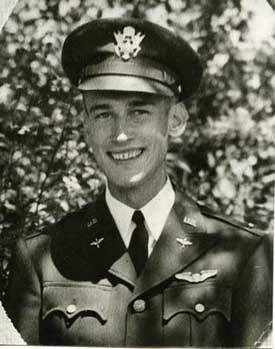 Chandler was lost during a mission out of the New Hebrides on September 14, 1942. 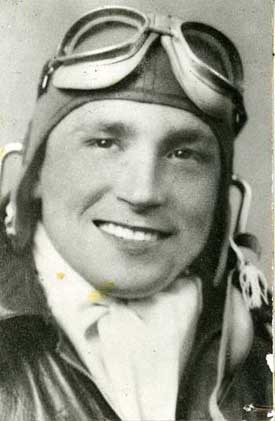 Harder was killed when his plane exploded on a flight to central Italy during he Battle of Salerno on Sept 7, 1943. 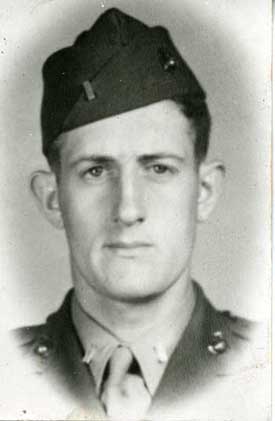 Carstensen died at the Battle of Saipan, June 15, 1944 and was buried at sea. 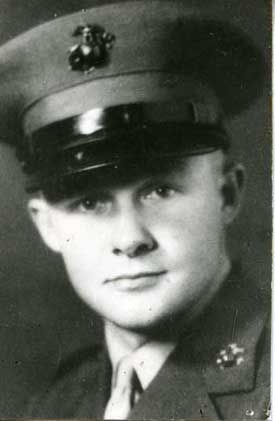 Carty was killed in an anti-tank explosion in Wellington, New Zealand. 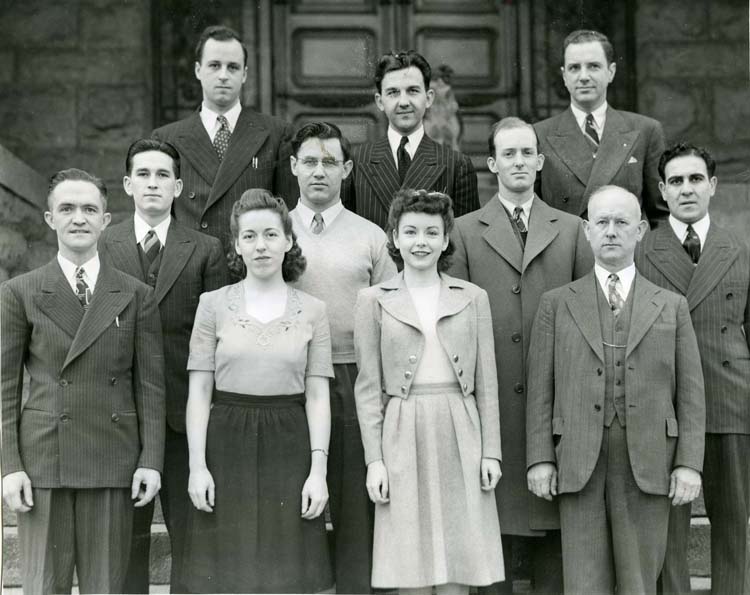 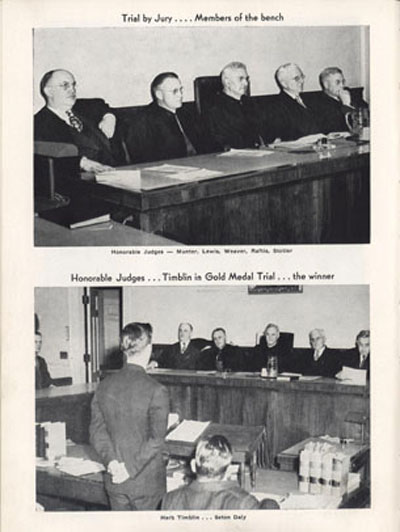 The 1947 Spires yearbook showed images from the April 25, 1946 from the Eleventh Annual Medal Competition in Legal Argumentation. The honorable judges included Hon. Richard S. Munter, Hon. Fred E. Lewis, Hon Samuel P. Weaver, Hon. John T. Raftis, and Hon. F. L. Stotler.  The winners for this year were from the junior class so the images appeared in their senior yearbook. 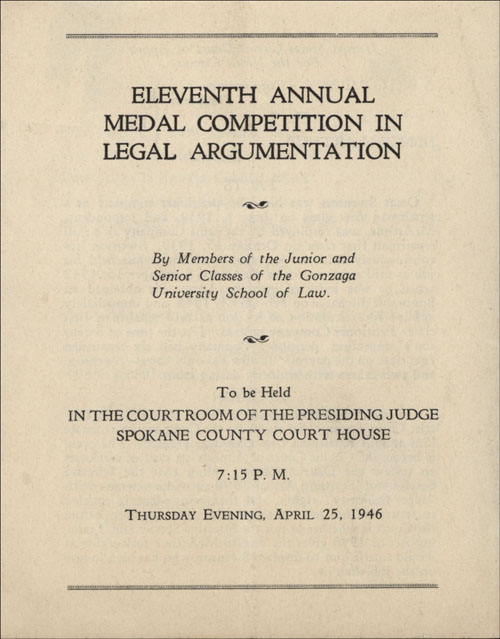 Members of the junior and senior classes annually competed in this event since 1935.  This eleventh competition was held in the courtroom of the presiding judge in the Spokane County Court House on April 25, 1946.   The first Annual Medal Competition in Legal Argumentation was given in 1935 and won by Joseph Hurley.  Later this competition was renamed the Linden Cup, in honor of Fr. James Linden, SJ, former Law Regent. 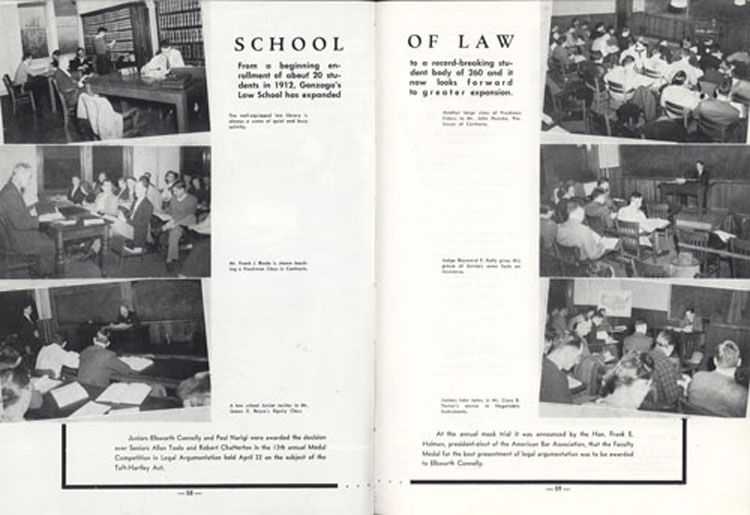 This double page spread from the yearbook shows the various activities of the law school for the 1947 – 1948 school year.   Beginning in 1912 with an enrollment of about 20 students, the law school had grown to over 260 students in 1948 and plans for expansion began. 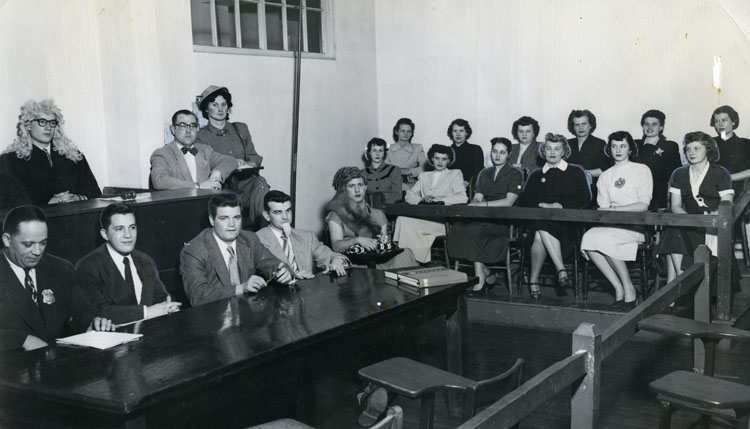 In the 1950s, law students, including two young men dressed as women’s roles, put on a mock trial while their wives and girlfriends watched from the jury’s seats. 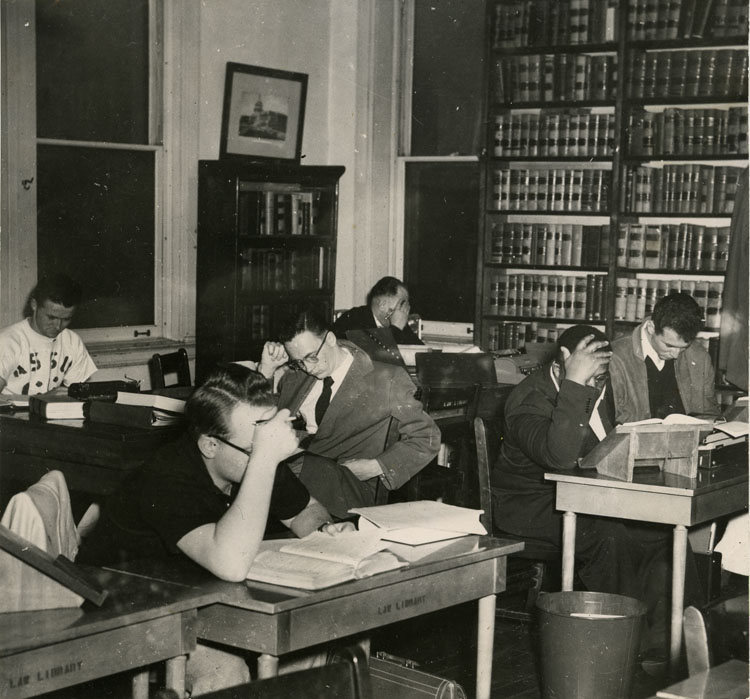 In 1937, University President Father Leo Robinson, S.J., raised $500 and bought duplicate legal books from the county law library for 10 cents apiece. The law library was moved to the third floor of the Administration Building. On December 10, 1941 (three days after Pearl Harbor) a fire started in the annex of the library. The apparent cause of the fire was cigarette butts in a garbage can. It took nearly a year to repair the damage, at a cost of $6,119.06. 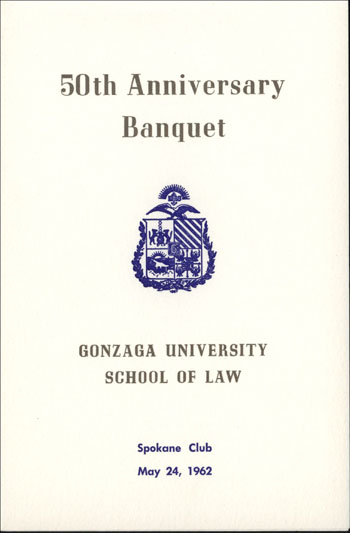 On May 24, 1962 the School of Law celebrated its 50th Anniversary at the Spokane Club. Officials from all across Washington came to join in the celebration.  The Hon. Sylvester C. Smith, President-Elect from the American Bar Association gave the address. 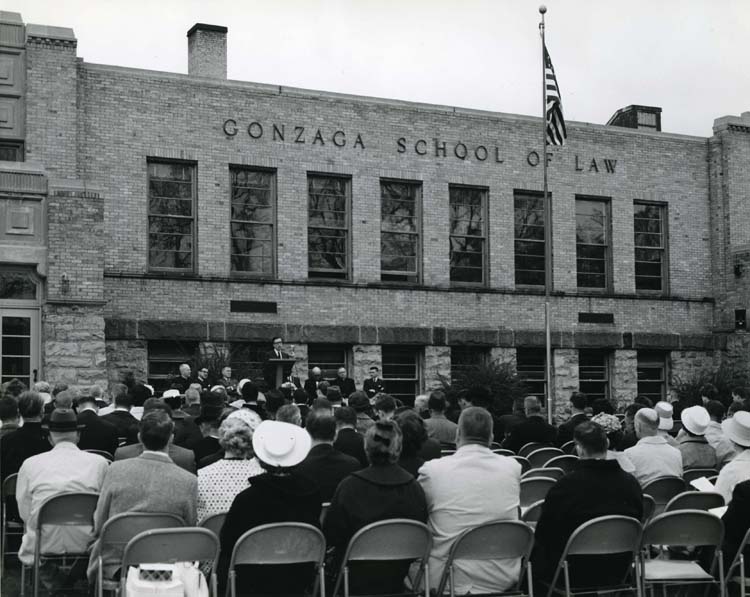 Since its beginning in the fall of 1912, the School of Law had been housed in the Administration Building. In 1963, Gonzaga purchased the former Webster Elementary School for $115,000 and dedicated the new law building which would become the first independent home for Gonzaga Law School. Students were very excited for the new school and eager to get out of the Administration building. 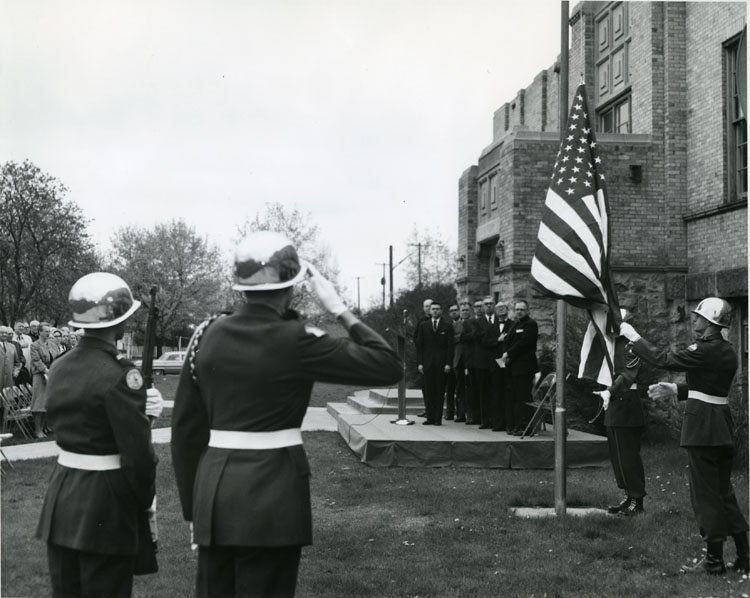 “Constitution and By-Laws of the Gonzaga Law Review Association”, May, 1966 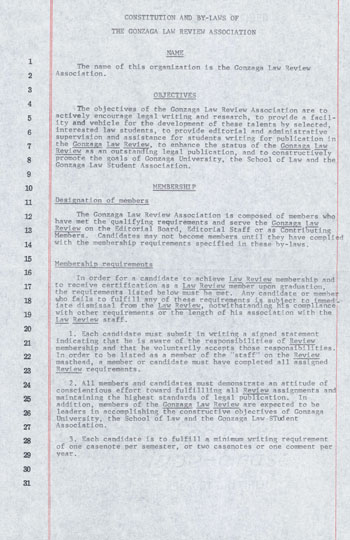 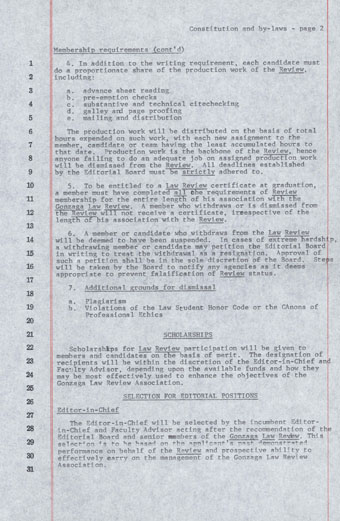 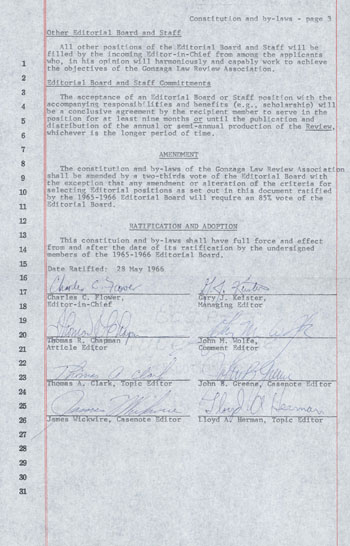 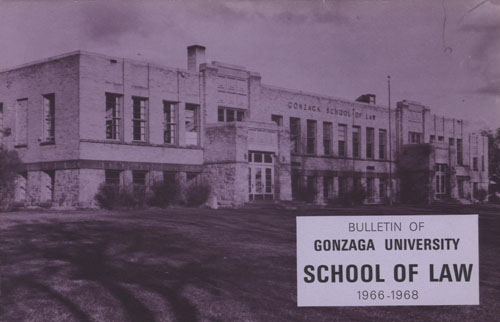 This catalog held important calendar dates, including registration, vacation holidays, courses taught, faculty listing, and much more for the academic years. Tuition was $500 per semester.