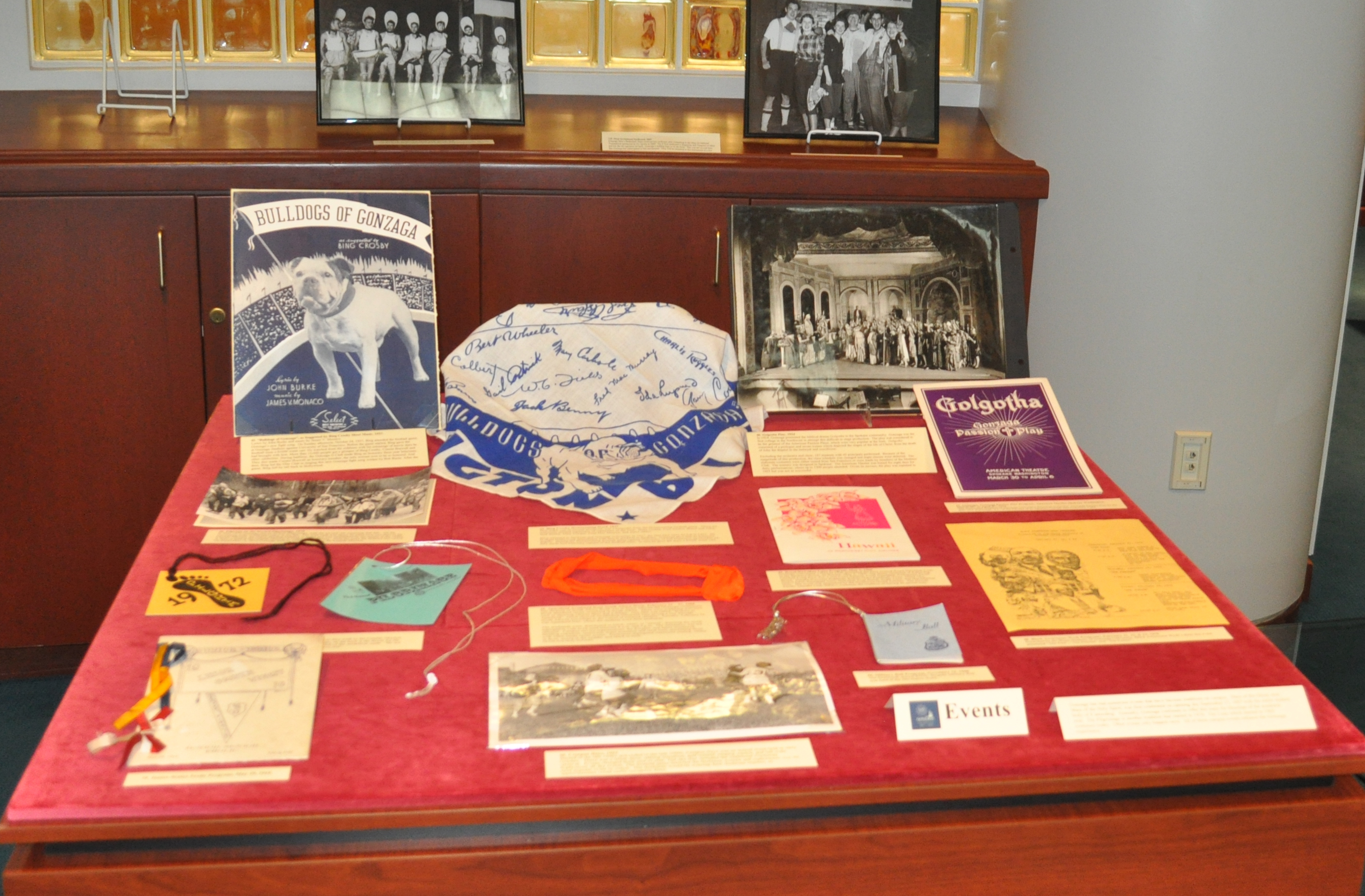 Gonzaga has had numerous events that have become traditions on campus.  Mass of the Ghost, now Mass of the Holy Spirit, was first celebrated on opening day September 17, 1887 with the entire student body of 8 attending.  Annually, Gonzaga continues to offer this mass for blessings of the academic year.  The Pilgrimage is another tradition that started in 1970.  The Luau which started in 1965 continues today.  Other events only happen once.  All of these campus events enhance the Gonzaga experience. 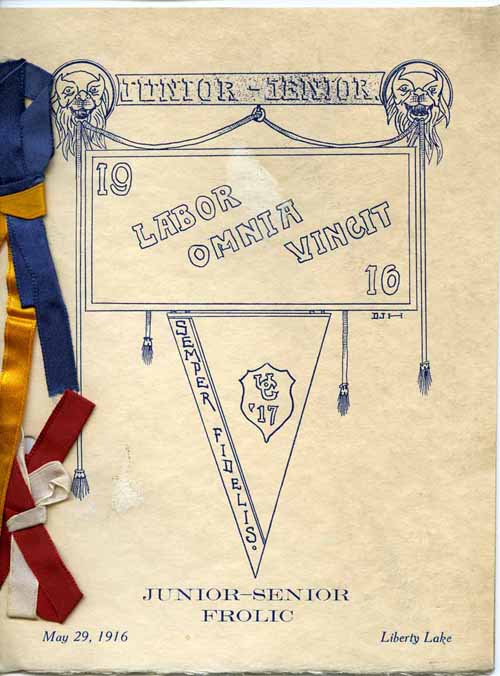 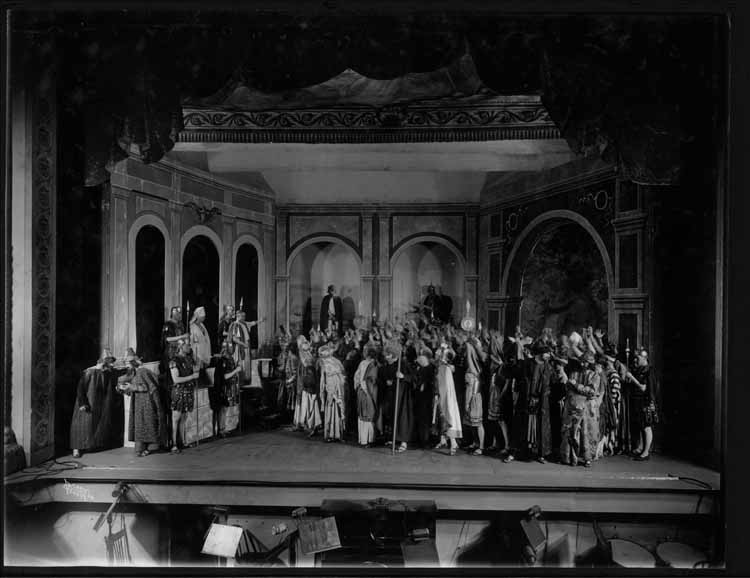 In 1924, Gonzaga presented the biblical drama Golgotha to the Spokane community.  Gonzaga was the first college in the Northwest to attempt this difficult to stage production.  The play was considered to be the greatest of the American Passion Plays, which were very popular at the time.  Golgotha consisted of a prologue and seven scenes which depicted the stages of the life of Christ, from the death of John the Baptist to the betrayal and crucifixion.

Excluding the orchestra and choir, 187 students with 45 principals performed.  Because of the magnitude of this production, the class schedule was changed and night classes were deferred.  The elaborate costumes were either rented from San Francisco or were made by members of the Mothers’ Club.  The scenery was designed in Spokane.  The American Theater was leased for eight days for daily performances, where up to 1500 people attended.  Given its success, the play was repeated in 1925. 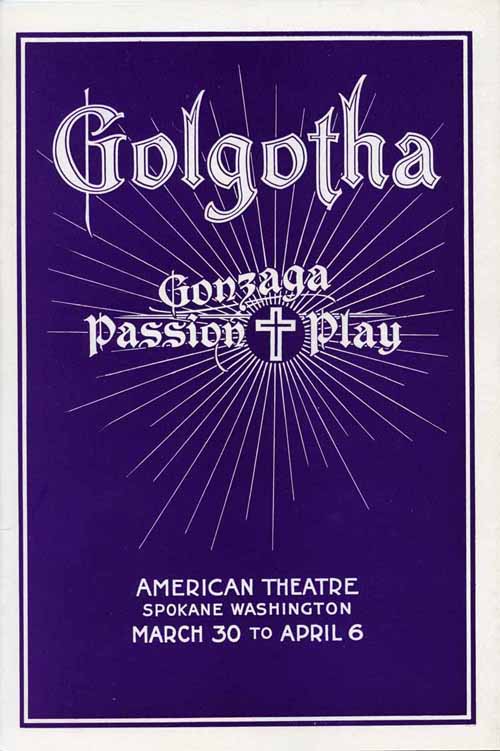 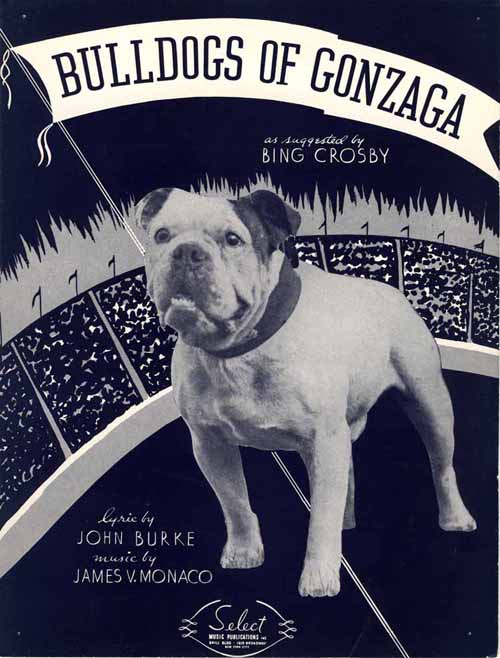 Lyrics by John Burke and music by James V. Monaco

Gonzaga’s new fight song.  On Sunday afternoon, October 24, 1937, Bing attended the football game at Gonzaga Stadium against University of San Francisco. Before the game started, Bing gave the football team a $1000 water cart. He watched from the sidelines with his entourage of movie stars he had brought with him. More than 12,000 people got a glimpse of Bing Crosby, Connie Boswell and other celebrities. During halftime, the Gonzaga G Club made Bing an honorary three-year letterman. They also made Connie Boswell an honorary member, the only woman ever to be so honored. And then, Bing led the Glee Club in singing this new Gonzaga fight song written by Bob Burns. After the game, Bing left by rail back to Hollywood. 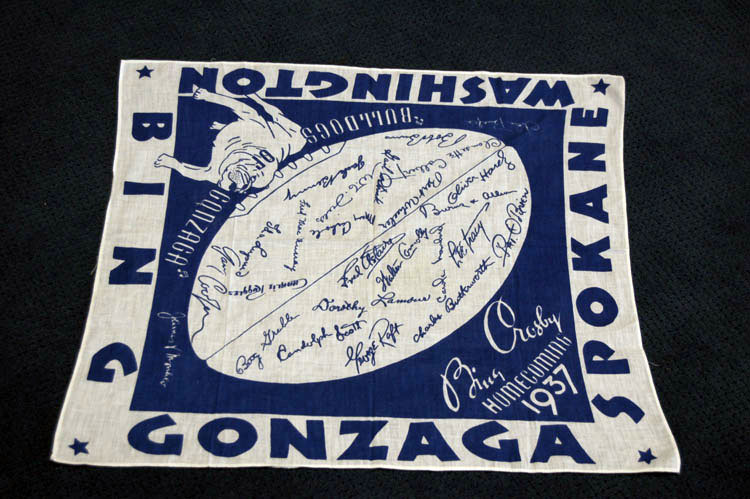 This scarf, one of several produced, was a keepsake from the Gonzaga's 1937 Homecoming football game.  There are numerous printed signatures of celebrities of the time:  Betty Grable, Fred Astaire, Burns and Allen, Jack Benny, Gary Cooper, Fred Mac Murray, and many others.

Bing returned to Spokane and Gonzaga University in 1937, the first time since he left in 1925.  He brought Hollywood entertainers with him to perform in Spokane.  Gonzaga gave him an honorary degree.  During the Homecoming football game against University of San Francisco, on October 24, they made him honorary captain of the football team.  In turn he gave the team a $1000 water cart. 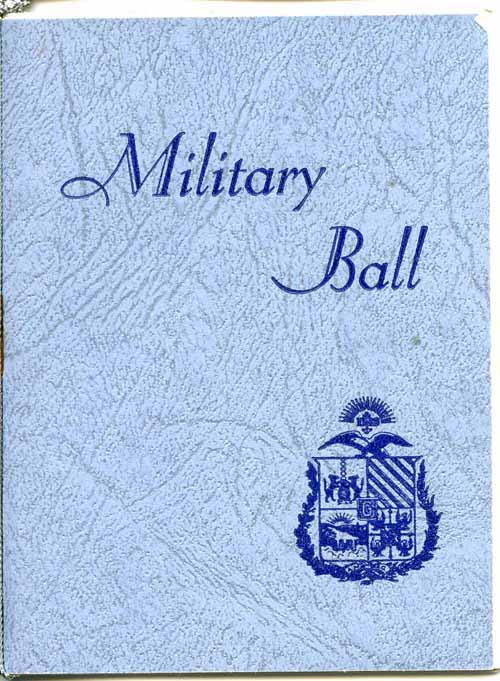 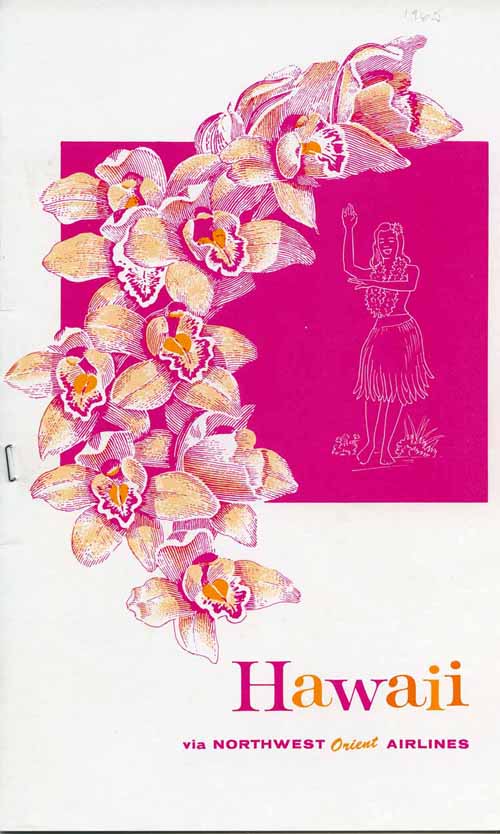 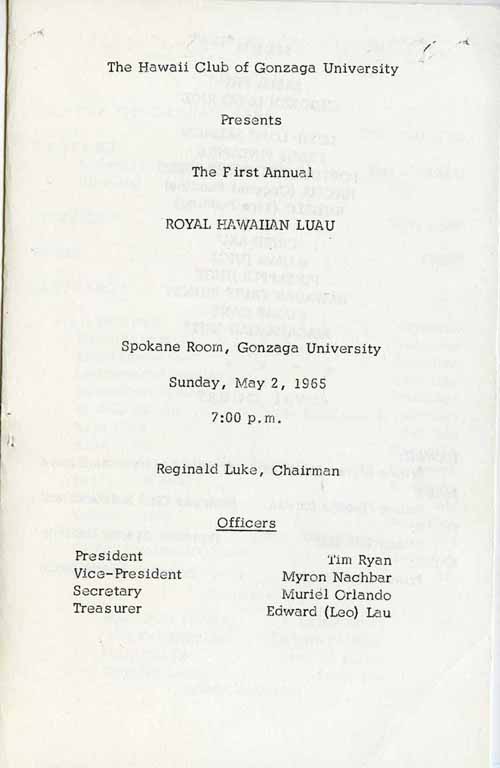 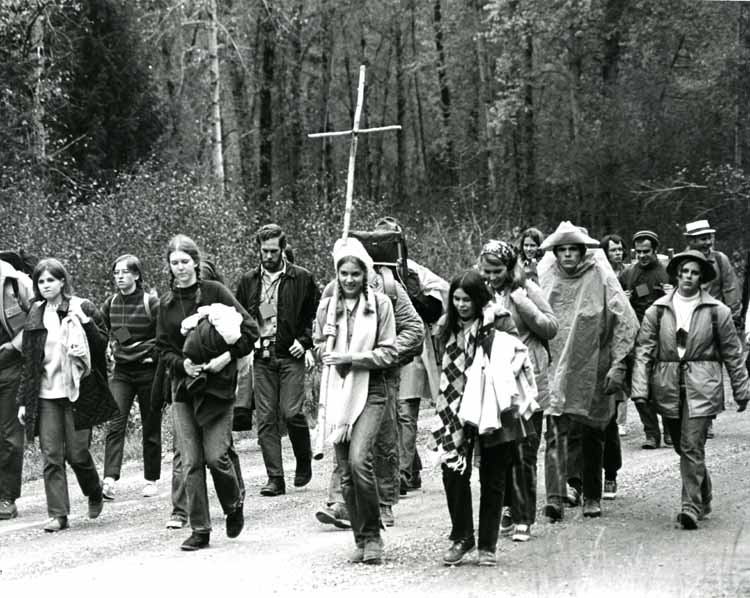 In May 1970 Gonzaga put on its first Pilgrimage, with the second one occurring that fall.  All the succeeding treks would take place in the fall.  The total walk was about 30 miles over two days to the Cataldo Mission, the oldest standing building in Idaho and was established by the Jesuits in the 1840s.  A mass is held at the Cataldo Mission to complete the journey.  Over the years the distance has varied.  On September 15, 2012 Gonzaga held its 43rd Pilgrimage to the Cataldo Mission. 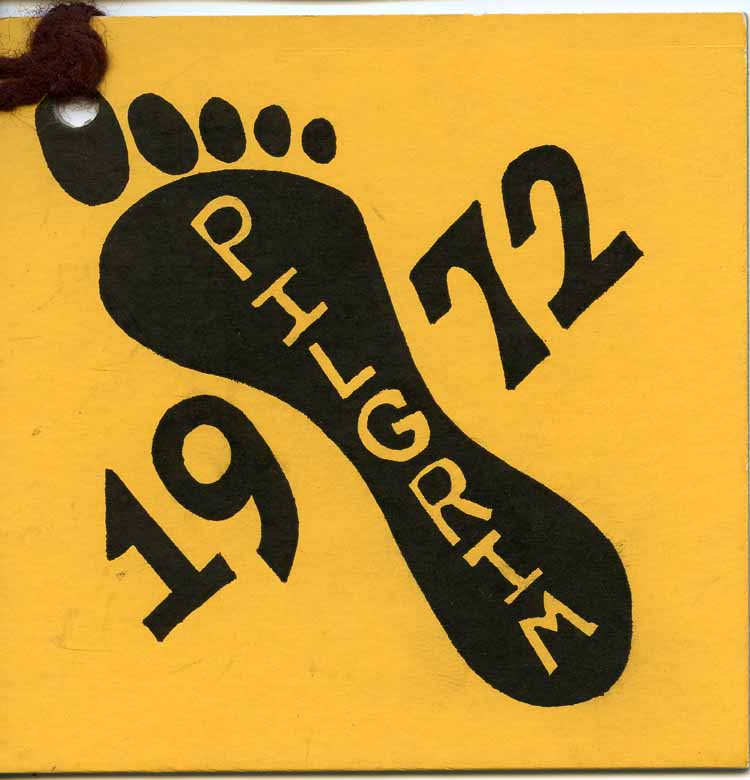 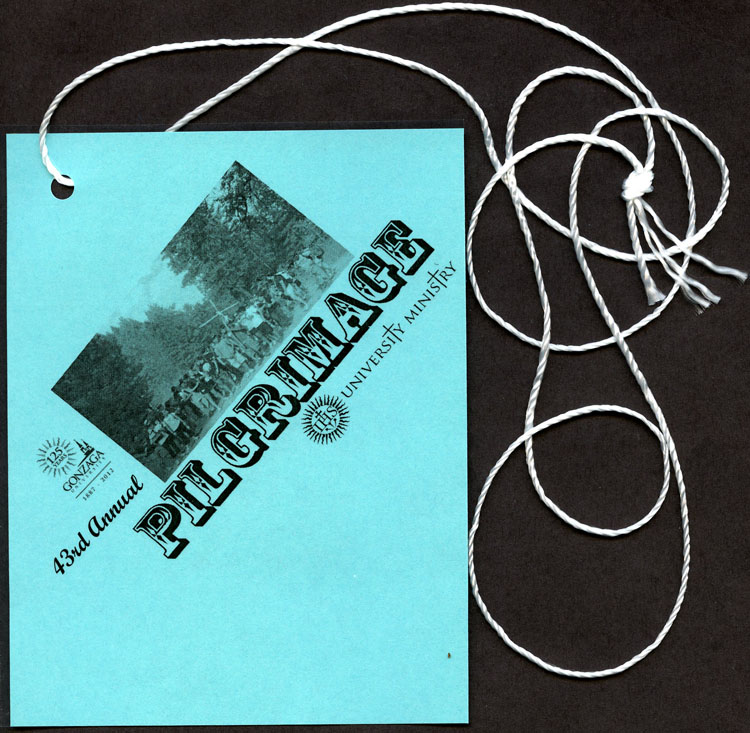 The Pilgrimage has always had the participants wear a medallion as they walk to the Cataldo Mission.  It helps center the students on their journey.  On one side is the logo, on the back is the theme for the year.  For Gonzaga’s125th Anniversary, the 43rd Pilgrimage, the back of the medallion reads:  “Be not afraid.  I go before you always. Come follow me, and I will give you rest”. 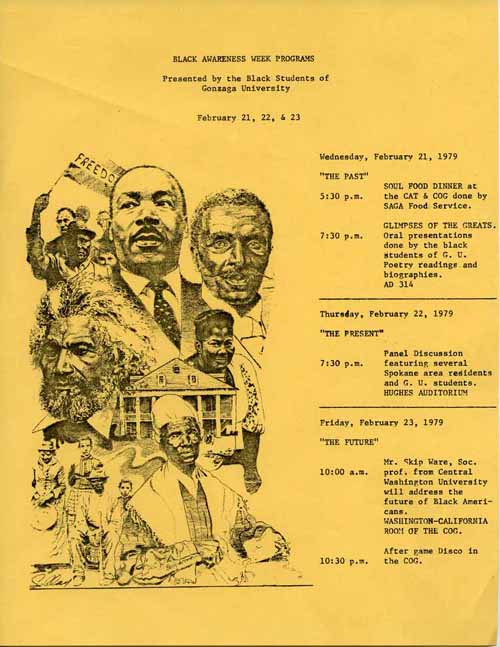 Presented by the Black Students of Gonzaga University, Black Awareness Week’s three day event presented “The Past”, “The Present” and “The Future” 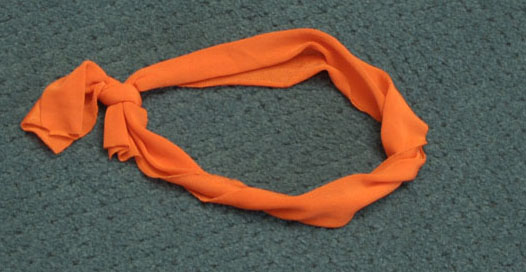 One of the "mixed" armbands

The purpose of South Africa Week was to better educate the Gonzaga community about apartheid issues occurring in South Africa.  There were weeklong activities such as showing various films and a debate.  One film was called “Witness to Apartheid”, which showed Archbishop Desmond Tutu  giving a tour through South African townships to the voices of tortured children.  Tuesday, February 23 was Apartheid Day, where the students wore their armbands.  The armbands were distributed in black, white, or “mixed”, denoting the racial segregation code to be used between 8 a.m. and 4 p.m.  The simulation was not optional.  Campus service organizations, the Knights, and Spurs monitored building entrances, restrooms, water fountains and meal lines, permitting those with white bands easier access.  Professors segregated classroom seating, whites in front, mixed in the middle, and black in back.

On loan from Molly McFadden 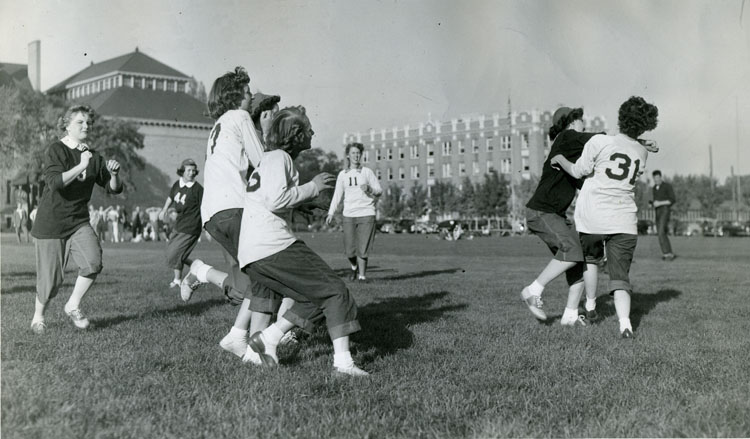 Started in the late 1940s and ended in the late 1960s, Campus Days was an annual event held in early October.  There was a talent show, talking marathon, golf contest, singing contest, and a full scale carnival.  Events changed from year to year.  The day also included the traditional Freshman-Sophomore all day events.  The football game between the freshman women and sophomore women was the most popular event to watch.  The freshman would be wearing their freshman beanies, so upperclassmen could easily recognize them.