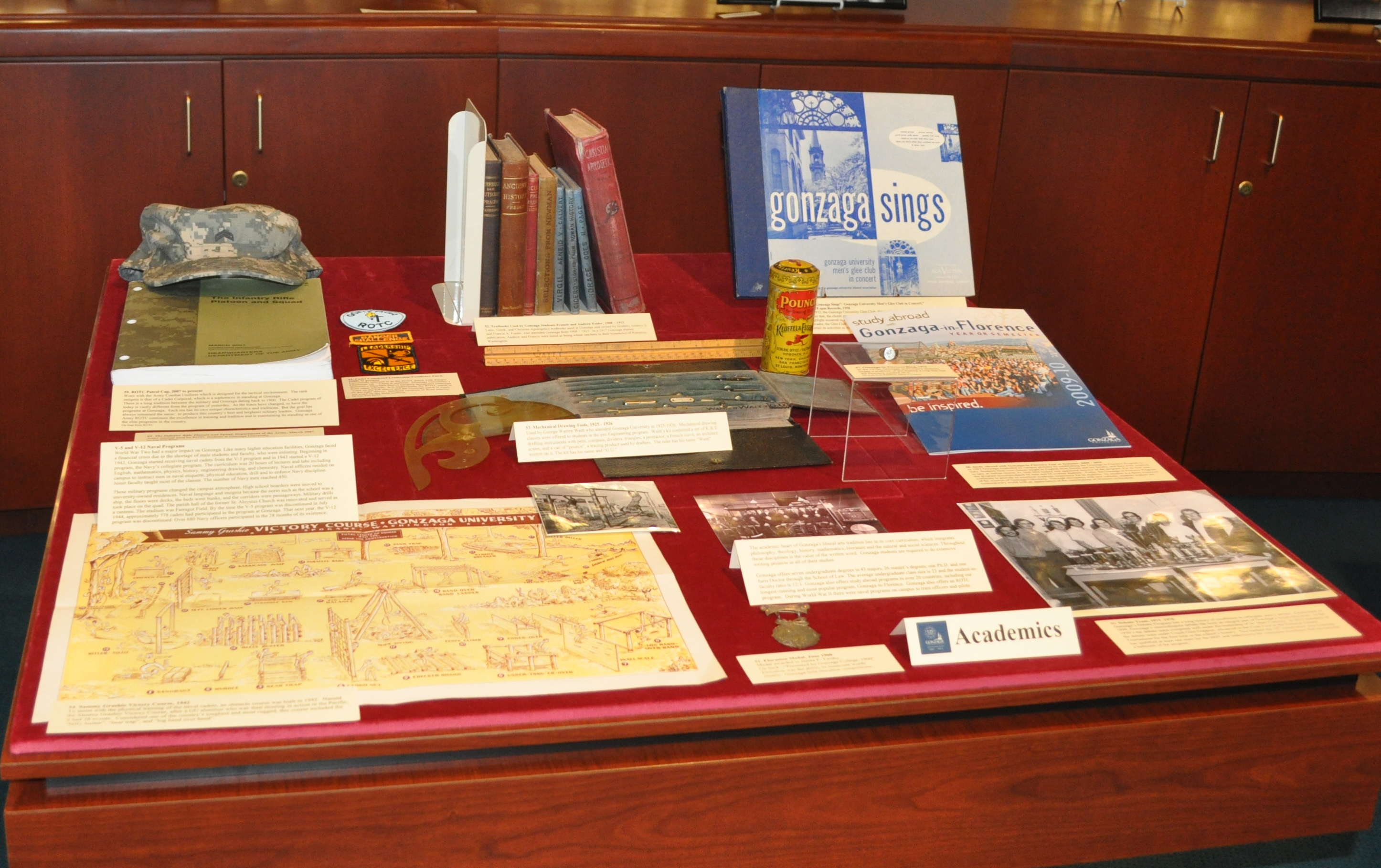 According to Gonzaga's website, the academic heart of Gonzaga's liberal arts tradition lies in its core curriculum, which integrates philosophy, theology, history, mathematics, literature and the natural and social sciences. Throughout these disciplines is the value of the written word.  Gonzaga students are required to do extensive writing projects in all of their studies.

Gonzaga offers seven undergraduate degrees in 43 majors, 26 master’s degrees, one Ph.D. and one Juris Doctor through the School of Law. The average undergraduate class size is 23 and the student-to-faculty ratio is 12:1. Gonzaga also offers study abroad programs in over 20 countries, including our longest-running and most popular program, Gonzaga-in-Florence.  Gonzaga also offers an ROTC program.  During World War II there were naval programs on campus to train officers and pilots. 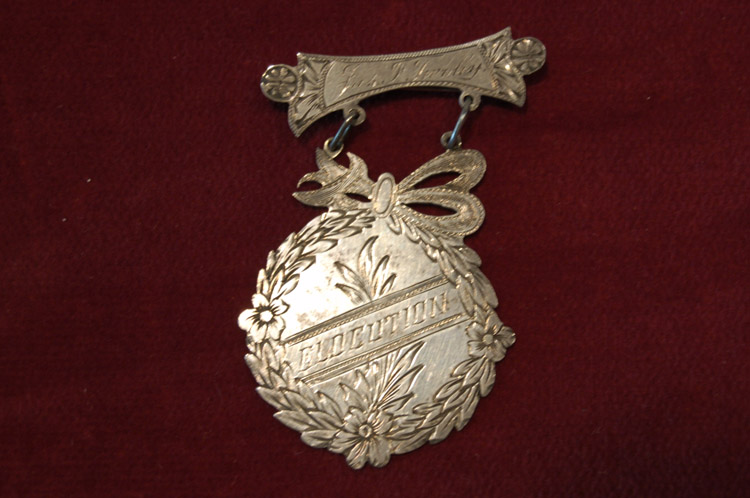 Medal awarded to James F. Twohy.  On back : “Presented by Gonzaga College, 1900”

Elocution was the ability to enunciate words clearly.  Gonzaga would have elocution competitions. 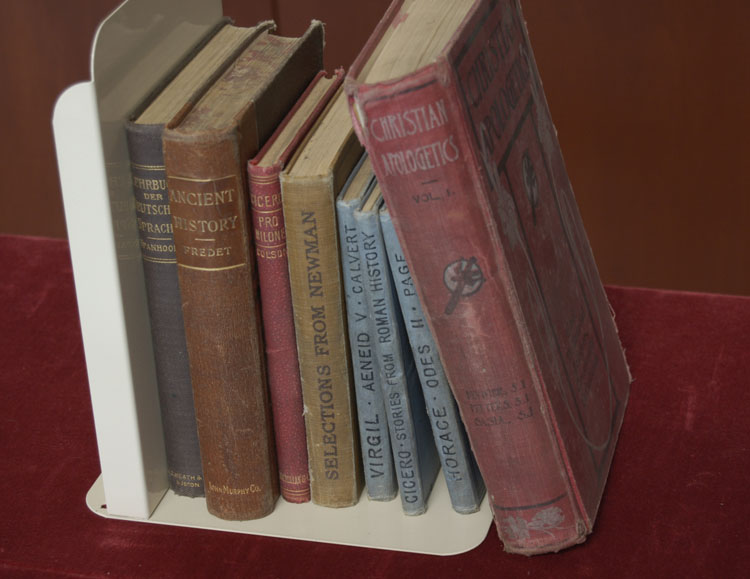 Latin, Greek, and Christian Apologetics textbooks used at Gonzaga and owned by brothers Andrew S. and Francis A. Fieder, who attended Gonzaga from 1908 – 1915.  In a 1917 Gonzaga alumni publication, Andrew and Francis were listed as being wheat ranchers in their hometown of Pomeroy, Washington. 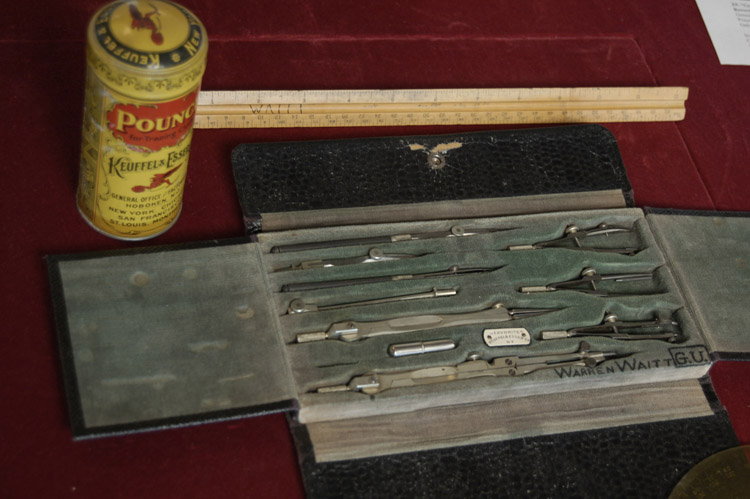 Used by George Warren Waitt who attended Gonzaga University in 1925-1926.  Mechanical drawing classes were offered to students in the pre-Engineering program.  Waitt’s kit contained a set of K & E drafting instruments with pens, compass, dividers, triangles, a protractor, a French curve, an architect scales, and a can of “pounce”, a tracing product used by drafters.  The ruler has his name “Waitt” written on it. The kit has his name and “G.U.” 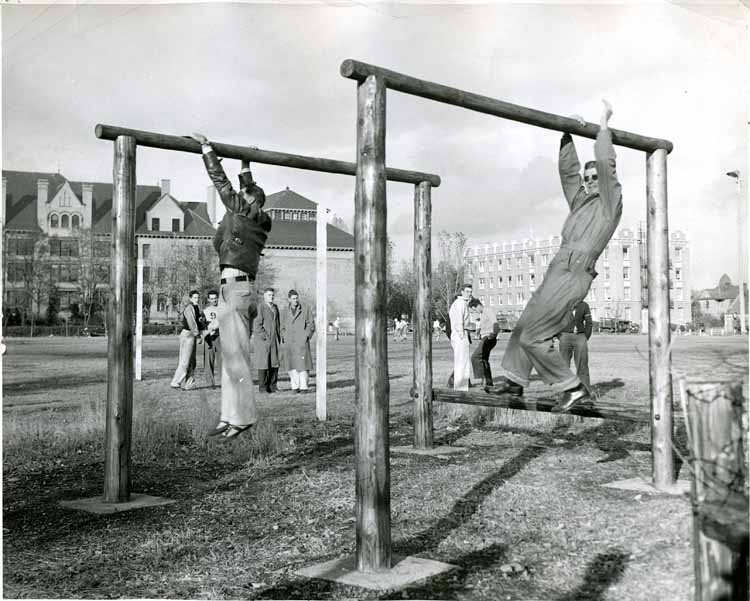 World War Two had a major impact on Gonzaga. Like many higher education facilities throughout the country, Gonzaga faced a financial crisis due to the shortage of male students, as well as faculty, who were enlisting. Beginning in 1942, Gonzaga started receiving naval cadets from the V-5 program and in 1943 started a V-12 program, the Navy’s collegiate program. The curriculum was 20 hours of lectures and labs including English, mathematics, physics, history, engineering drawing, and chemistry. Naval officers resided on campus to instruct men in naval etiquette, physical education, drill and to enforce Navy discipline. Jesuit faculty taught most of the classes. With the 300 V-12 and 150 V-5 cadets, the number of Navy men reached 450.

These military programs changed the campus atmosphere. High school boarders were moved to university-owned residences. Naval language and insignia became the norm such as the school was a ship, the floors were decks, the beds were bunks, and the corridors were passageways. Military drills took place on the quad. The parish hall of the former St. Aloysius Church was renovated and served as a canteen. The stadium was Farragut Field. By the time the V-5 program was discontinued in July 1944, approximately 778 cadets had participated in the program at Gonzaga. That next year, the V-12 program was discontinued. Over 680 Navy officers participated in the 28 months of its existence. 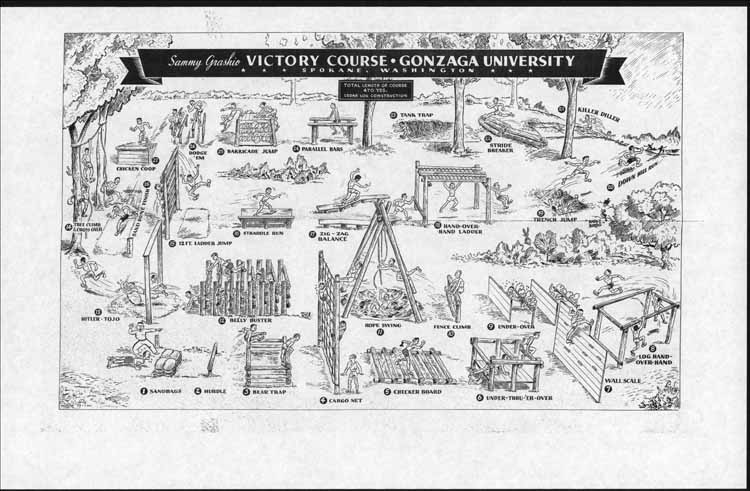 To assist with the physical training of the naval cadets, an obstacle course was built in 1942.  Named the Sammy Grashio Victory Course, after a GU alumnus who was then missing in action in the Pacific, it had 28 events.  Considered one of the country’s toughest and most rugged, this course included the “belly buster”, “bear trap”, and “log hand over hand”. 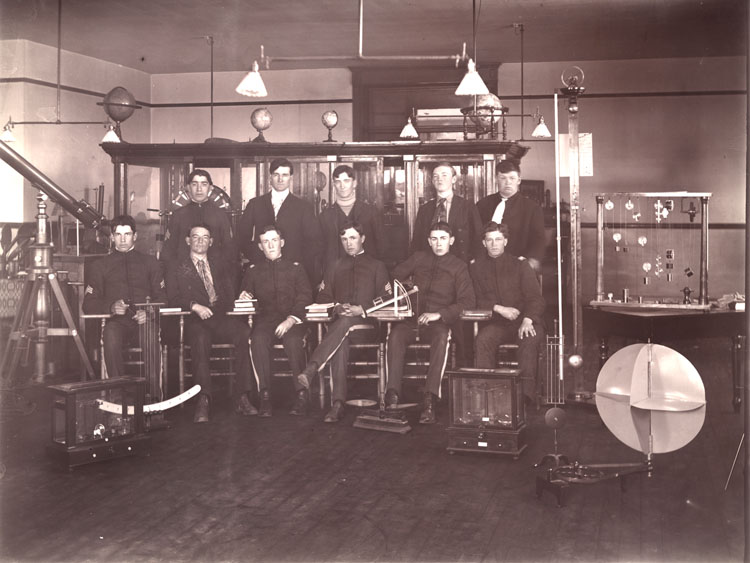 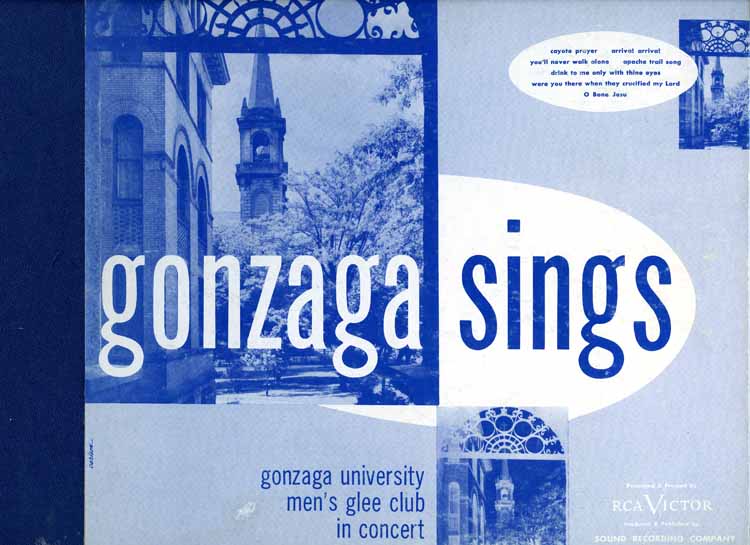 In 1932, the Gonzaga University Glee Club, directed by Lyle Moore, began to tour the Pacific Coast. After that, the choral group typically traveled up to 5,000 miles a year. The Glee Club’s all-time highlight occurred in 1949, when it performed with alumnus Bing Crosby on ABC radio. For three decades, the Glee Club flourished under Moore’s baton. By 1958, Gonzaga administrators decided to curtail its activities so its members could spend more time on their studies. 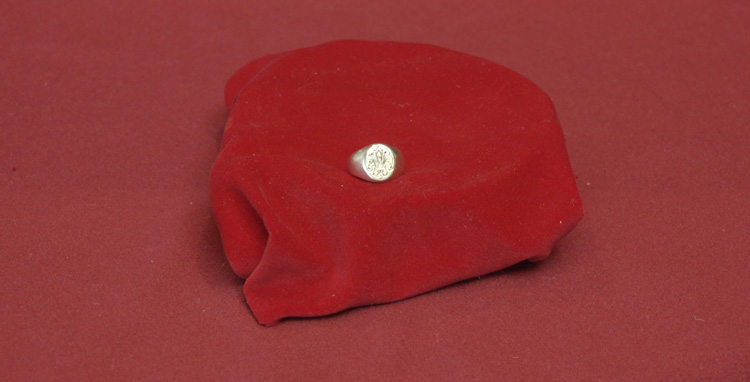 In the 1970s, Gonzaga-in-Florence students began a tradition of purchasing a ring that had the Florence symbol on it.

On loan from Kathleen Allen O’Connor 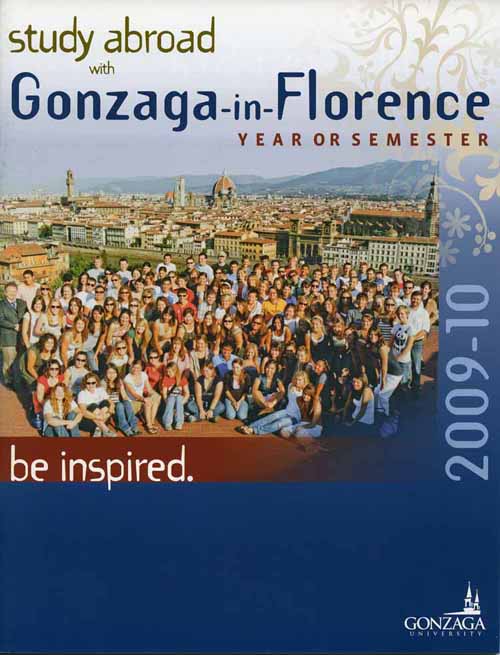 In 1963 Gonzaga expanded its campus globally by establishing the Gonzaga in Florence Program in Italy. Students took core classes taught in English from Jesuits and lay faculty, and they were required to take an Italian course. Fr. Neil McCluskey was appointed director of the program. For its first year, the program accommodated 34 men and 25 women students.  Today, the Gonzaga in Florence Program continues to provide an excellent academic experience for its students.  Its mission is a direct extension of the mission of Gonzaga University.  Through encounters with new cultures, students explore the contemporary world with an appreciation of the contributions of Western civilization. 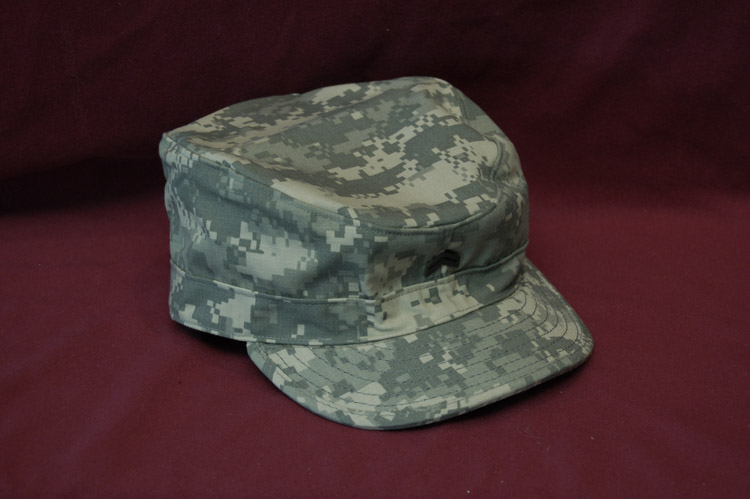 This cap is worn with the Army Combat Uniform which is designed for the tactical environment.  The rank insignia is that of a Cadet Corporal, which is a sophomore in standing at Gonzaga.

There is a long tradition between the military and Gonzaga dating back to 1900.  The Cadet program of today is vastly different from the program of yesterday.  As the times have changed, so have the programs at Gonzaga.  Each era has its own unique characteristics and traditions.  But the goal has always remained the same:  to produce this country’s best and brightest military leaders.  Gonzaga Army ROTC continues the excellence in training and tradition and is maintaining its standing as one of the elite programs in the country. 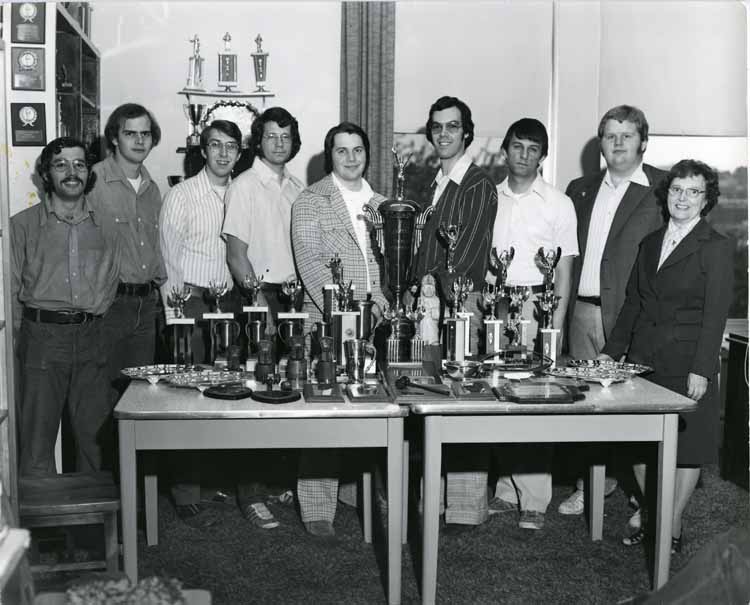 Gonzaga’s Debate Program has a long history of excellence in collegiate policy debate.  Established in 1898, Gonzaga’s intercollegiate debate has been an integral part of Gonzaga’s Jesuit education.  In the 1970’s the debate team competed well under the leadership of Sr. Mary Conway.  In 2012 members of the debate team under Coach Glen Frappier, advanced to the Final Four in the National Debate Tournament for the first time in the school’s history.  This marked the 16th consecutive year Gonzaga has qualified at least one team for the NDT and underscores the consistent excellence that has become a hallmark of the program. 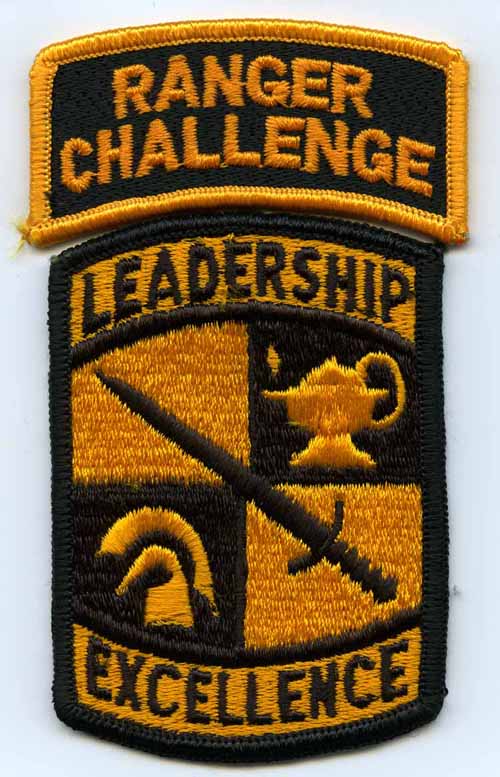 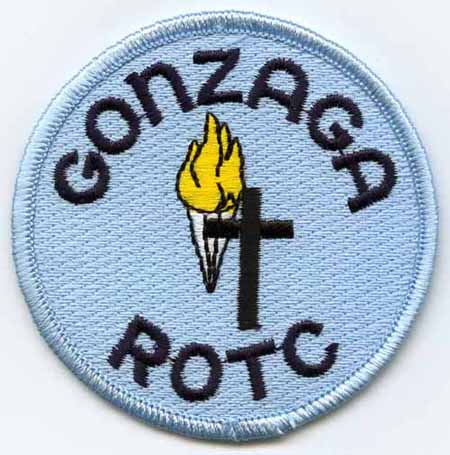 Commonly referred to as the ROTC patch with Ranger Challenge tab – Class A uniform.

Item 62: The Infantry Rifle Platoon and Squad, Department of the Army, March 2007 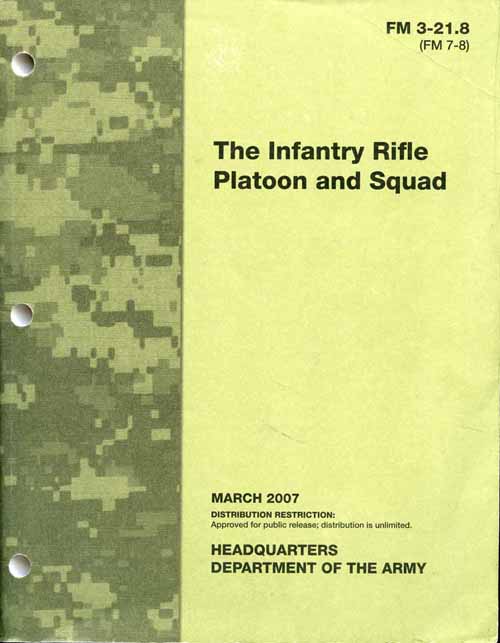