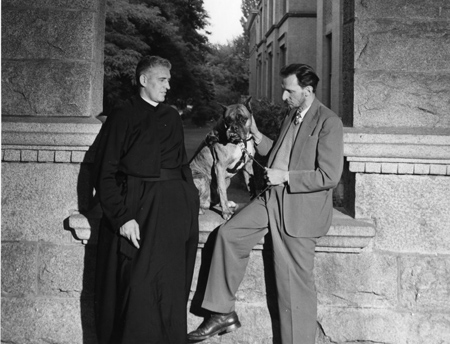 To request a high resolution image from our Digital Collections, please email uasc@gonzaga.edu with its identifying information and your contact information.

Born June 28, 1904 Hector Chevigny received his B.A. from in 1927 and did postgraduate work at the in 1928.   He worked his adult life as a writer, with six major publications to his credit. In addition he had many articles and stories accepted in major publications, and wrote numerous radio scripts. Three of those publications: Lost Empire (1937), Lord of (1942), and Russian America (1965), dealt with Alaskan history.  Another major endeavor was a work done with clinical psychologist Sydell Braverman, the Chevigny-Braverman Auditory Projective Test. He became totally blind in the 1940s but continued to write.   My Eyes have a Cold Nose (1946) is the story of his adjustment to working with his seeing eye dog, Wizard. He died on April 20, 1965.

These papers include: manuscripts, correspondence, clippings, magazine articles, writings, presentations, special endeavors, photographs, and sound recordings.  With the collection is also a key to the city of , given to him at the time he gave the principal address for the Alaska Days activities in .