Thinking about Faith and Politics: Three Traditions of Political Philosophy in the Middle Ages : Case 7 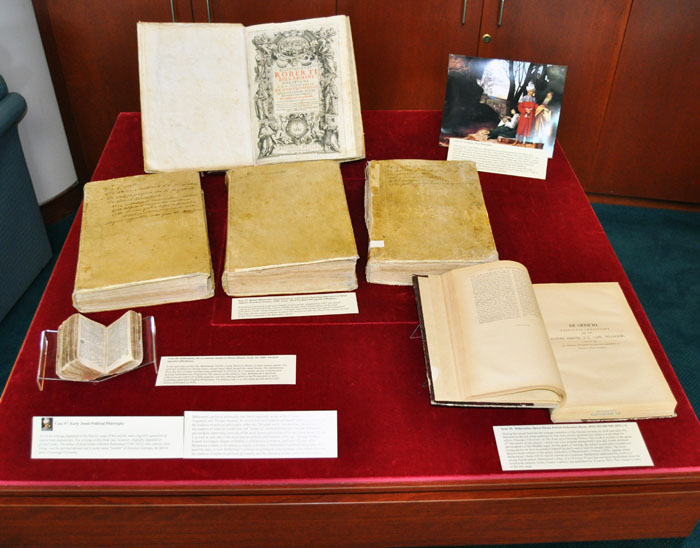 All of the writings displayed in the first six cases of this exhibit were originally generated as handwritten manuscripts. The writings in this final case, however, originally appeared as printed books. The author of these books is Robert Bellarmine (1542-1621), who, among other things, was the spiritual advisor and in some sense “teacher” of Aloysius Gonzaga, the patron saint of Gonzaga University. 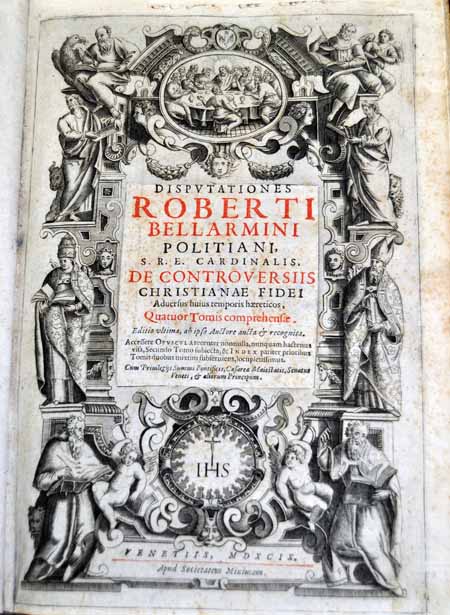 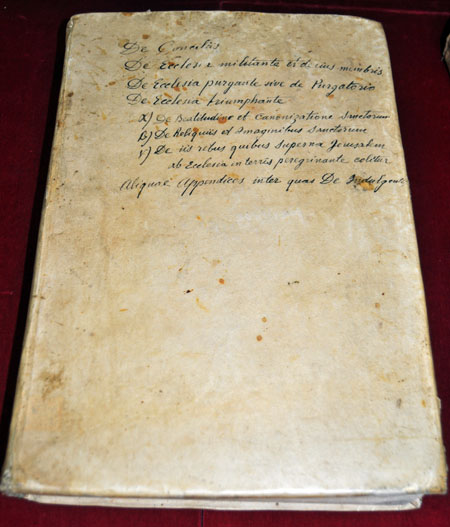 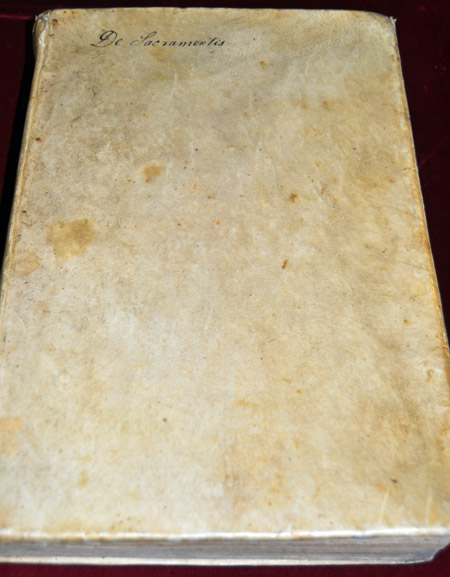 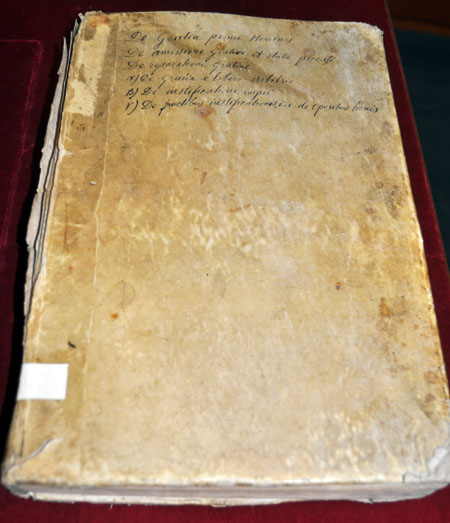 Bellarmine’s principal work is his lengthy Controversies, completed in 1593. The special collections division of Foley Center contains an early four-volume edition of the work published in 1599. These volumes are on display here, with volume one open to its beautiful title page. On the closed volumes, someone has written in Latin the titles of the various sections of the work contained in the particular volume. 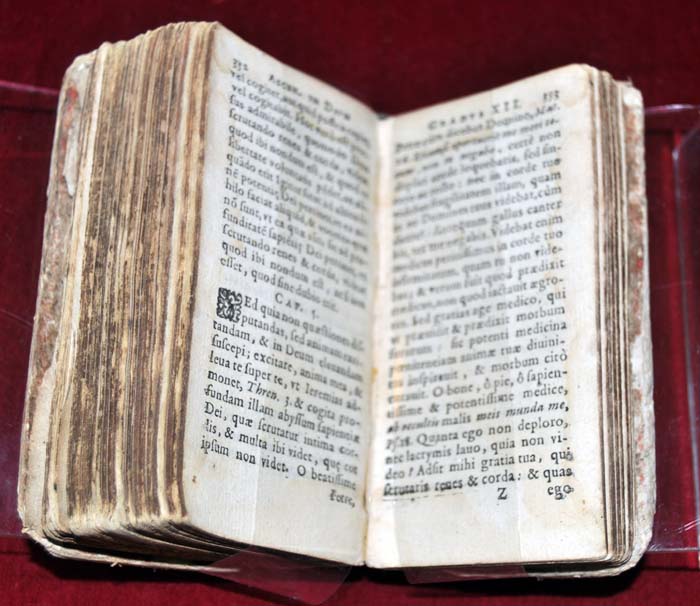 In the last years of his life, Bellarmine led the young Jesuits in Rome on their annual retreat. His spiritual meditations during these retreats were often turned into small books. His meditations from the first of these retreats were published in 1615 as De ascensione mentis in Deum and quickly translated into English as The Ascent of the Mind to God. Bellarmine’s spiritual reflections proved to be wildly popular, not only among Catholics but Protestants as well, including especially English Protestants. On display here is a very early pocket-sized Latin edition published in 1616. 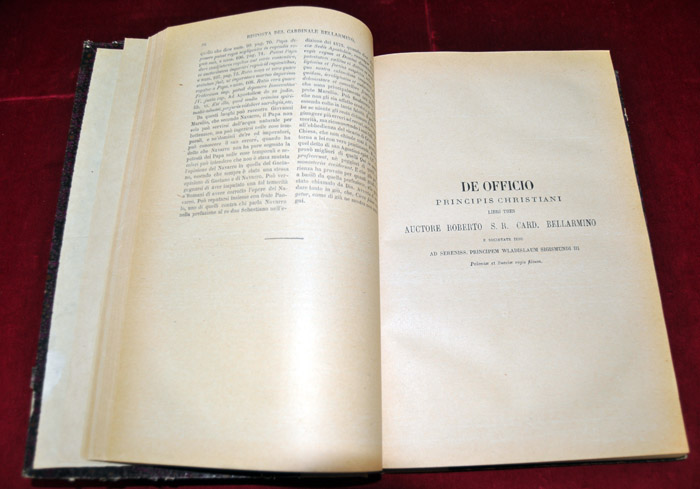 During the retreat held for the younger members of the Society of Jesus in 1618 (see item 28), Bellarmine did not write meditations that were strictly spiritual, but rather a work titled De officio Principis Christiani, or The Duty of a Christian Prince. This work is written in the genre of “the mirror of the prince,” which was very popular among both Latin and Arabic political philosophers of the Middle Ages. In this genre of writing, the author would offer counsel to a young prince on how to conduct himself properly and to rule his people justly. The most famous book written in the genre, ironically, is Machiavelli’s Prince (1532), against which Bellarmine’s book (1618) can be viewed as a response. Bellarmine addressed his work to a young Polish prince. Bellarmine’s Duty of a Christian Prince has not been republished since the nineteenth century; Foley Center’s edition was published by Vives in 1875. The volume is open to the title page. 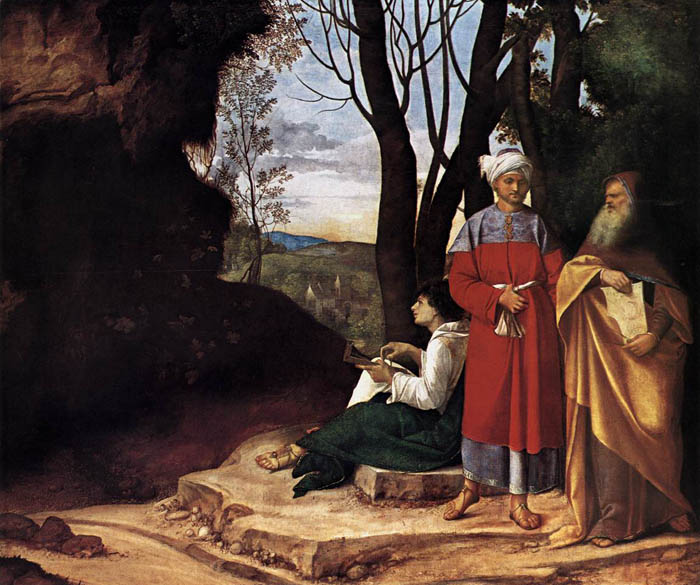 The final item in this exhibit is a reproduction of a painting attributed to the Italian artist Giorgione. The title is said to be The Three Philosophers, and the work was completed in 1509. Although scholars do not agree on the interpretation of the painting, it clearly features, reading from the right, an old man with an astronomical drawing, a middle-aged man who is apparently an Arab conversing with the old man, and a seated young man with measuring instruments looking toward a cave. It is not unreasonable, then, to identify the three figures as representatives of ancient, medieval, and modern philosophy. The cave evokes the image of Plato’s allegory of the cave, with which this exhibit begins in Case #1 (see item 1). A village or small city appears in the background of Giorgione’s painting.