Thinking about Faith and Politics: Three Traditions of Political Philosophy in the Middle Ages : Case 3

Case #3: The Rise of Latin Political Philosophy: Cicero and Augustine 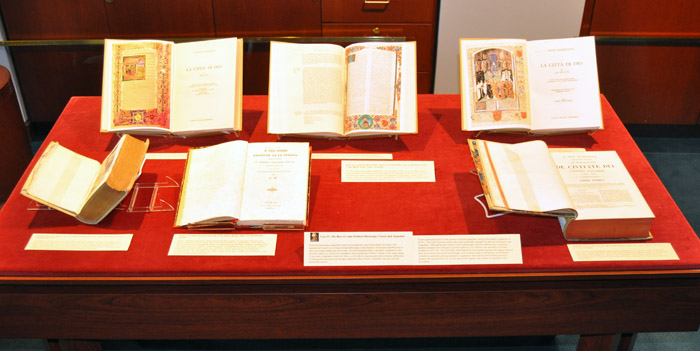 Political philosophy entered the Latin world especially due to the efforts of Cicero, who understood himself as writing political philosophy in the tradition of Socrates and Plato but in the Latin tongue rather than the Greek. His political philosophy is primarily contained in his Republic and Laws, which are intended as loose imitations of Plato’s books of the same names. Cicero also composed a book On Duties, or De officiis, that proved to be extremely influential in subsequent Latin political thought, especially since Cicero’s Republic was lost until the nineteenth century.

Cicero practiced politics in the context of ancient paganism, dying at the hands of assassins in 43 B.C. The Latin Christian author who most profoundly engaged his political philosophy was Augustine. Although he had studied Cicero’s philosophy from his earliest days, Augustine’s attention became more focused on politics after the city of Rome was sacked by Germanic invaders in 410 A.D.  The Christians were blamed for this disaster because, the pagans claimed, their novel ethical and political teachings, such as those found in the Sermon on the Mount, worked to undermine good government. Augustine’s most famous book treating political matters, the monumental City of God against the Pagans, was written in response to this accusation. 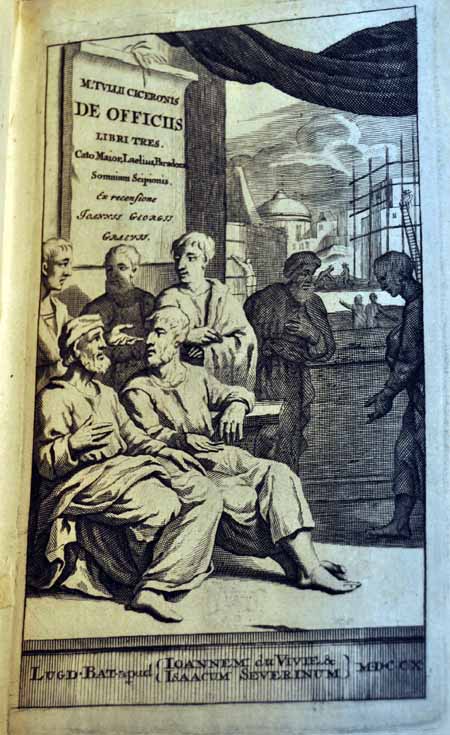 The special collections of Foley Center library include an edition of Cicero’s On Duties or De officiis that was published in 1710. Because it treats duty or moral obligation, including justice, this work, like the other works of Cicero, came to be widely studied in the earliest Jesuit colleges. This book was once in the rare book case of the library of the Jesuits in Sheridan. It is opened to the impressive frontispiece, which also serves as a title page. 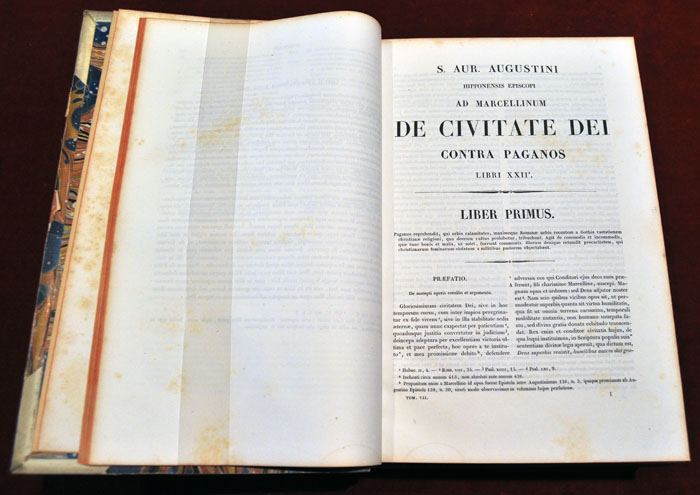 Foley Center Library possesses many copies of Augustine’s City of God in various languages. The oldest version dates from 1838 and is based on the famous Maurist edition, which was first published by the Benedictine monks of the Congregation of St. Maurus at the end of the seventeenth century. It seems to have come into Foley’s holdings from the personal library of J.E.B. Mayor. 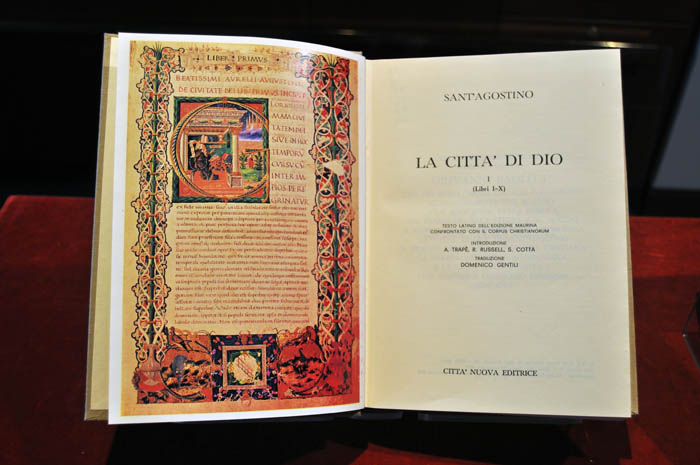 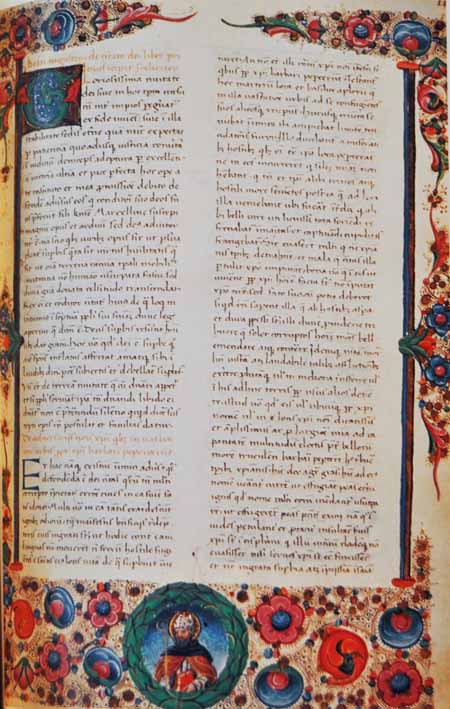 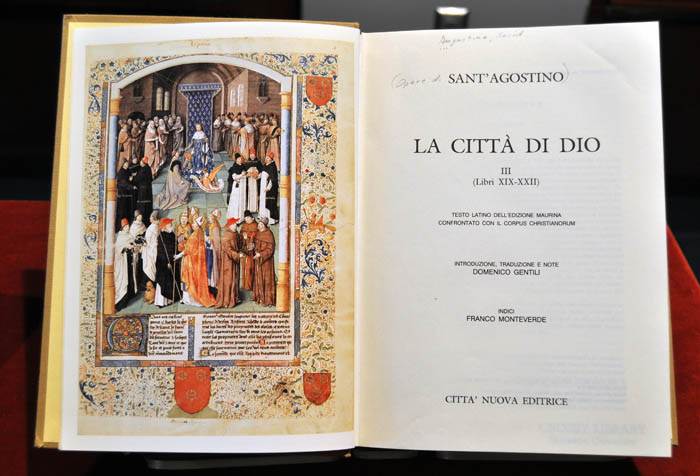 In 1978, Italian scholars began publishing a fine new edition of the City of God that included a Latin text based on the Maurist edition but improved through study of more recent critical texts; the edition also features an Italian translation that appears on facing pages. As part of the project, which was not finished until 1991, the publisher, Cittá Nuova Editrice, included a series of colored plates; some of these are displayed in this case. 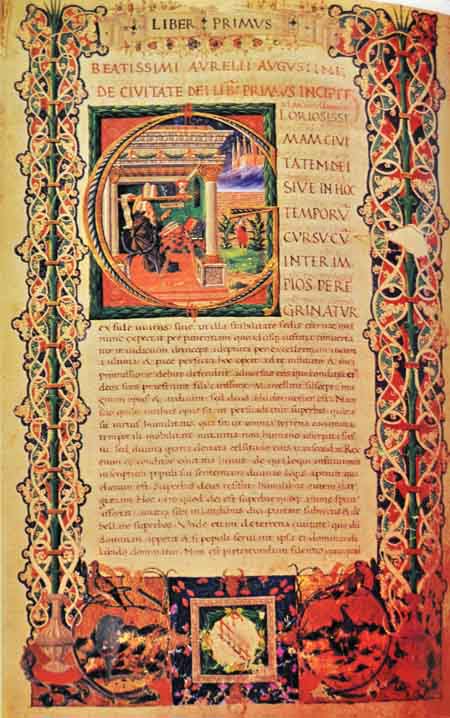 This is a colored plate from the first volume of the edition; it reproduces the opening page of an illustrated manuscript of the City of God from late medieval times that is thought to be the work of a Milanese artist.

This plate from the second volume shows an illustrated page from a Florentine manuscript of the City of God housed in the Laurentian library, which is not far distant from Gonzaga’s Florence campus. 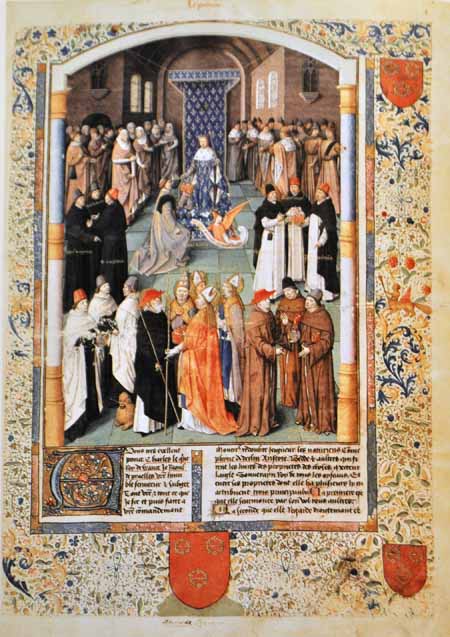