Coughlin went above and beyond as Gonzaga’s longest running president, however, perhaps more impressive than his achievements in office is the important work he managed to preform outside his presidential duties. Since his inauguration, he has been known as a prominent figure in the Spokane community. Beyond this, Coughlin had been forming relationships that reached far outside of his university environment for years before he even began at Gonzaga. He was a Fulbright lecturer in Columbia in 1970 and 1971, a U.S. Representative to the International Council on Social Welfare in Helsinki, Finland, and served as a social work consultant in Guatemala, Peru, and Chile through the 1960s. He also was a friend to everyone he met. He made important friendships with the Gonzaga regents and trustees, which allowed him to be an effective president. Represented here is the evidence of the work he did to help serve his community, and the far-reaching relationships he formed as a result of his selfless and relentless work ethic.

Fr. Coughlin receives a certificate of appreciation for his membership in the Northwest Citizen’s Forum on Defense Waste, pictured with Michael Lawrence, manager of the Richland Operations Office, U.S. Department of Energy, October 1986 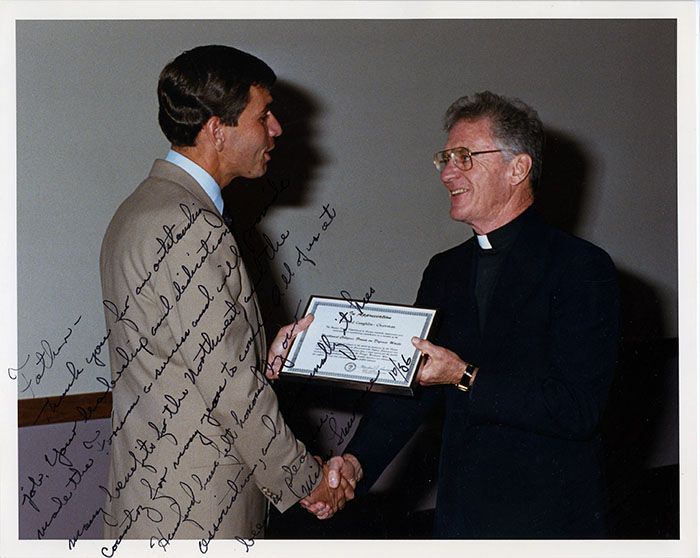 Handwritten note from Mike Lawrence states: “Your leadership and dedication has made the Forum a success….” 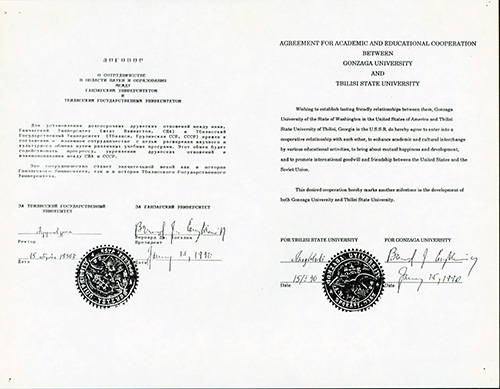 While traveling in Europe and Asia in January of 1990, Coughlin formed academic relationships in Soviet Georgia that led to the conception of a Gonzaga-Soviet exchange program. Here, printed in both Russian and English, is a representation of the far-reaching ties Fr. Coughlin managed to create during his presidency. Additionally, he received several gifts while abroad, including the sword, the pennant, and the medallion, all further evidence of his commitment to forming amicable connections on a global scale in true Jesuit fashion.

Photograph taken in the Office of the Russian Orthodox Patriarch of Soviet Georgia during trip to Tbilisi State University in Soviet Georgia, January 1990 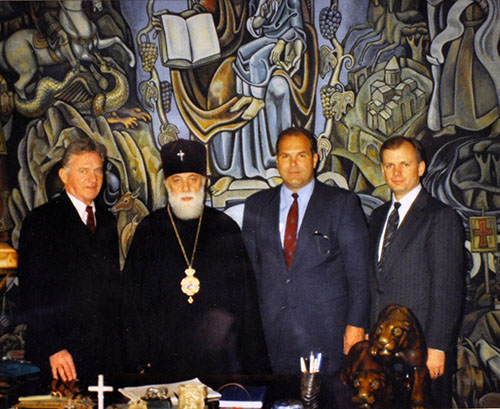 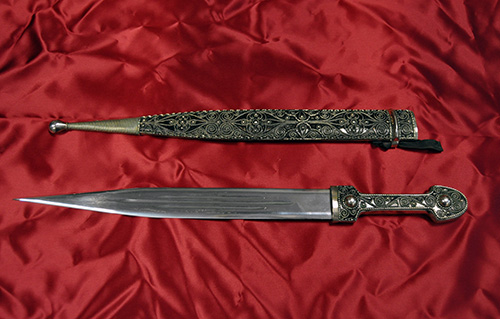 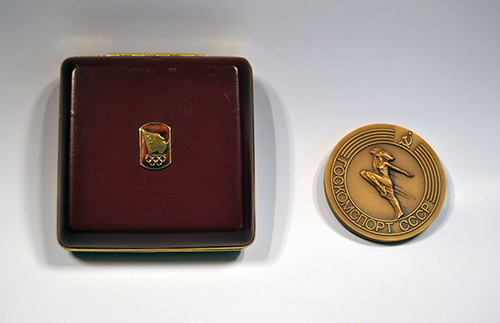 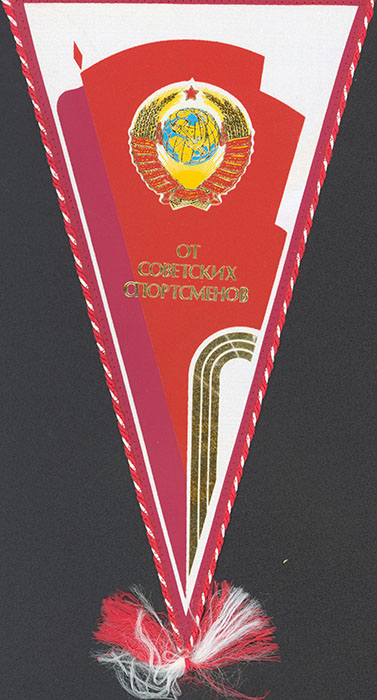 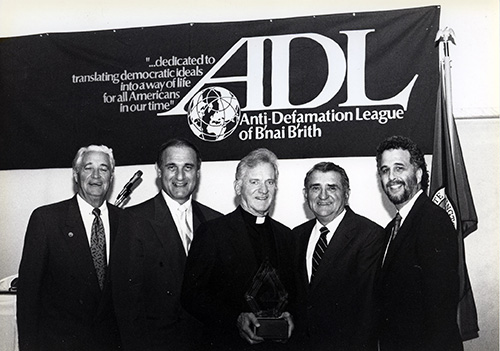 One of Fr. Coughlin’s most notable of these achievements was his reception of the ADL’s Distinguished Community Service Award. Upon reception of this award, which he earned for “leadership as president of Gonzaga University, service to the community, preserving liberty, counteracting bigotry, and advancing the cause of human rights,” Coughlin was recognized by other members of the Spokane community and beyond. He received letters of congratulations from the CEO of Washington Water Power, the mayor of Spokane, the governor of Idaho, and Tom Foley, the Speaker of the House. 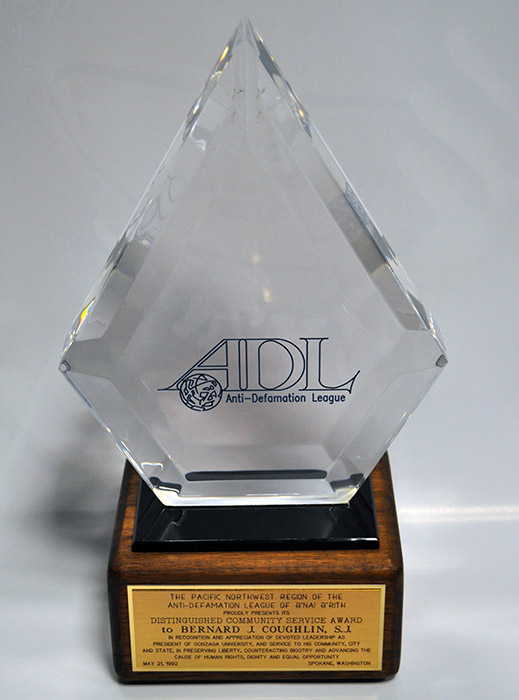 Letter from Cecil D. Andrus, Governor of Idaho, to Bernard Coughlin regarding his reception of the Distinguished Community Service award from the Anti-Defamation League, May 8, 1992 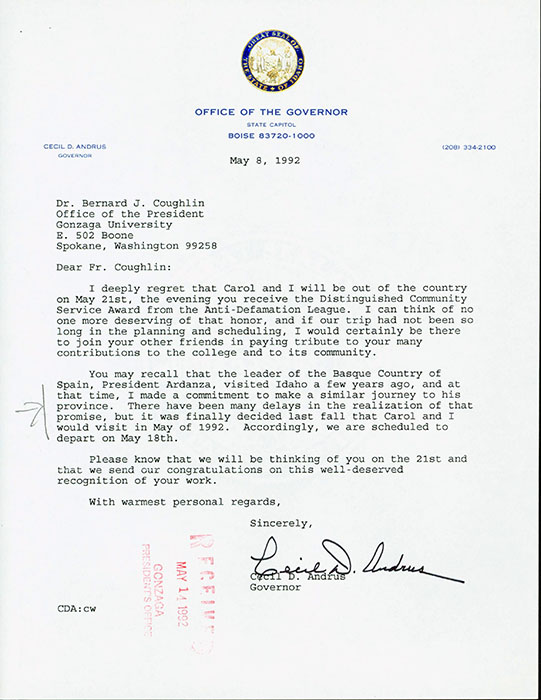 Governor Andrus sent a letter of regrets to miss the event but thought of “no one more deserving of that honor”.

Letter from Tom Foley to Bernard Coughlin regarding his reception of the Distinguished Community Service award, May 18, 1992 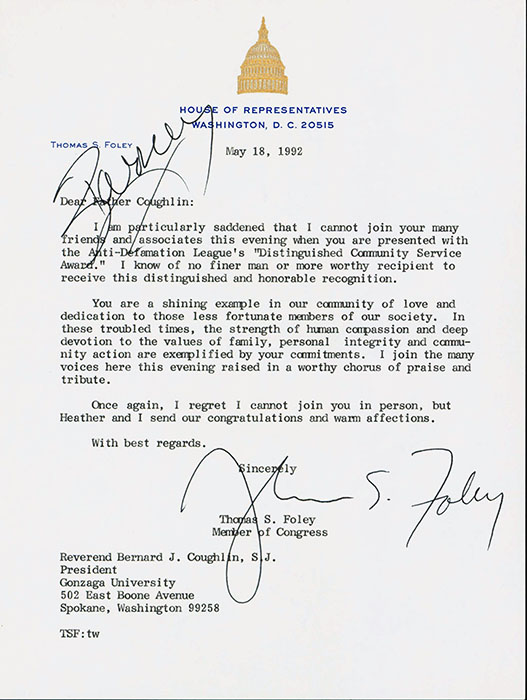 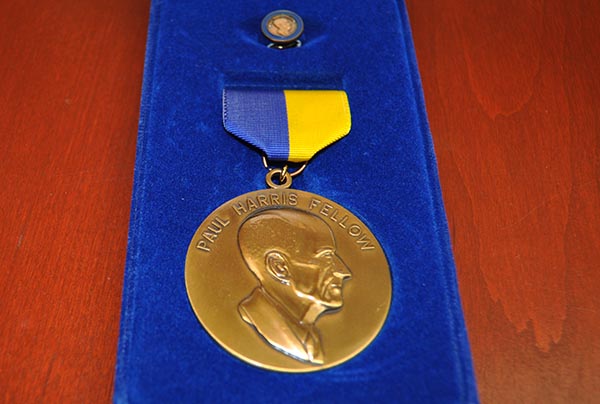 "in appreciation of tangible and significant assistance given for the furtherance of better understanding and friendly relations between peoples of the world." 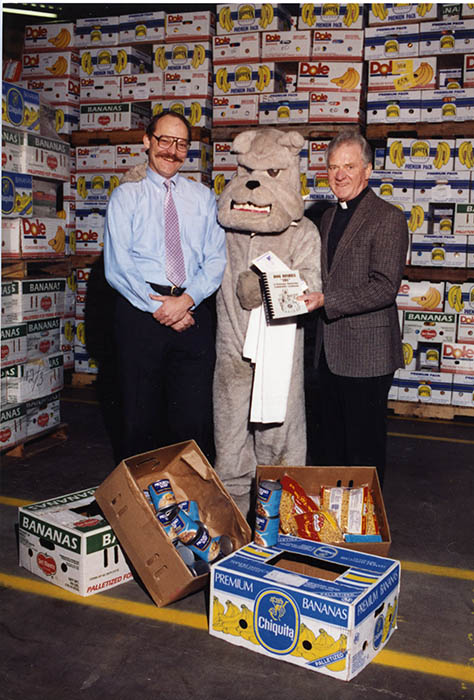 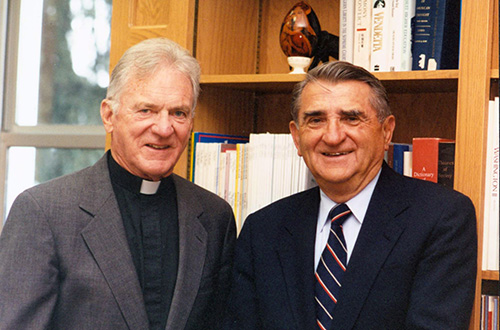 Certificate of Appreciation presented to Reverend Bernard Coughlin on behalf of the State of Washington, May 13, 1994 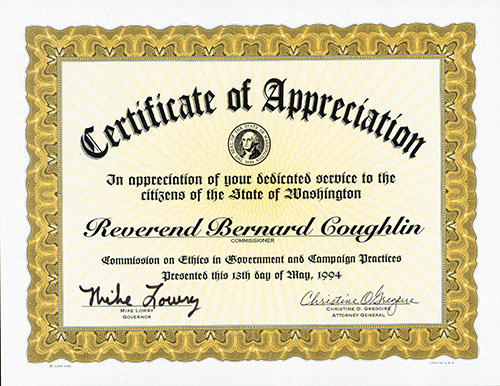 This award was given to Fr. Coughlin by the governor of Washington, Mike Lowry, and the attorney general, Christine O. Gregoire for dedicated service to the citizens of Washington. 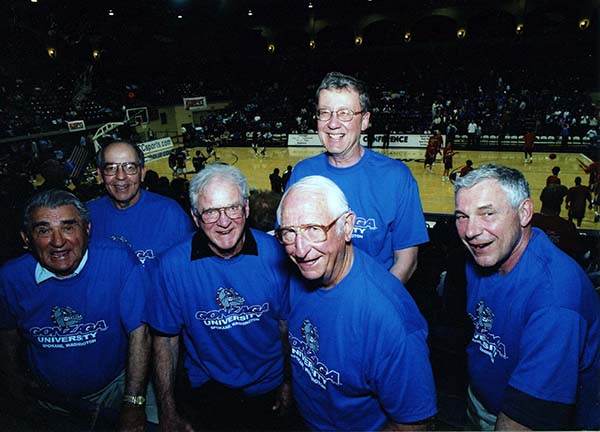