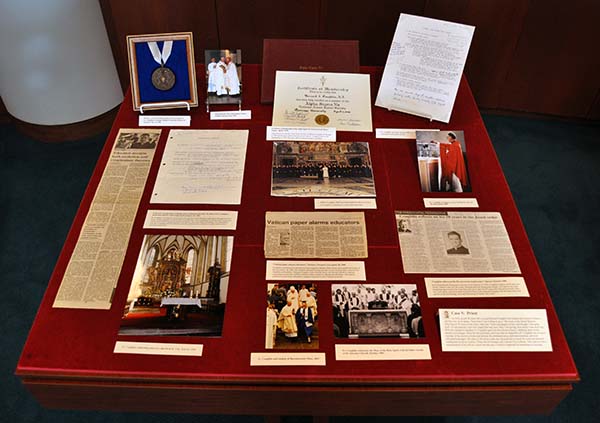 In 1942, at just 20 years old, a young Bernard Coughlin first entered the Society of Jesus, a call that was, as he states, “more than I was willing to give.” He wrote in the Inland Register, reflecting on 50 years in the Jesuit order that “I gave grudgingly at first, and thought I was great stuff. As time passed, I saw how stupid that was, how little I was giving, how much I was receiving.” With this change in mindset, Fr. Coughlin grew into his role as a Jesuit, a defining factor in his identity at Gonzaga. While he was president, and even after as chancellor, Fr. Coughlin was an active member of the church at home and abroad. He celebrated mass, delivered homilies, and even officiated marriages. His place in the Jesuit order also allowed him to travel for work and pleasure, leading him as far as Austria, China, Soviet Georgia, and Vatican City in Rome. This case provides a representation of his life as a Jesuit and the way in which it impacted his leadership at Gonzaga. 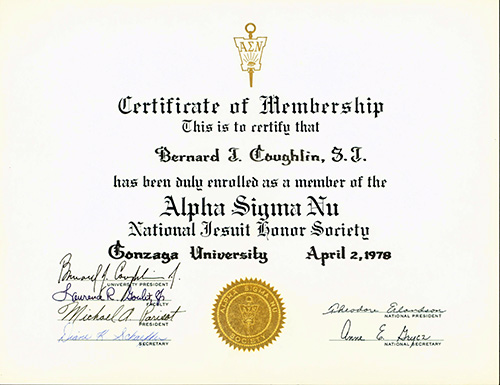 Alpha Sigma Nu, the only Jesuit Honor Society, established a chapter at Gonzaga University in 1939 and has been a part of the school since that time. Fr. Coughlin received his membership in 1978, four years after becoming Gonzaga’s president.

Fr. Coughlin was active in expressing his opinion to the Spokane community through the local news. In this example, he shows how contradictory views regarding Evolution and Creationism can be reconciled to accommodate both beliefs. At a time when this debate was particularly relevant, Coughlin used his identity as both a priest and an educator to make sense of two opposing arguments. 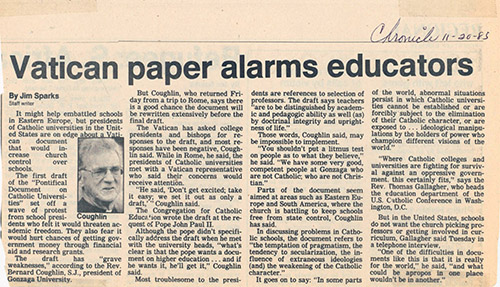 Coughlin contributed to educational and religious debates both within and outside the scope of the university. In 1985, the Vatican released a proposal that would increase their control over Catholic universities. Though Coughlin was a model Jesuit, he was not afraid to express contention toward the Catholic church when it came to educational freedom. This article outlines his and other educators’ negative reaction to this Vatican proposal.

Fr. Coughlin swinging a censer during the Mass of the Holy Spirit, 1989 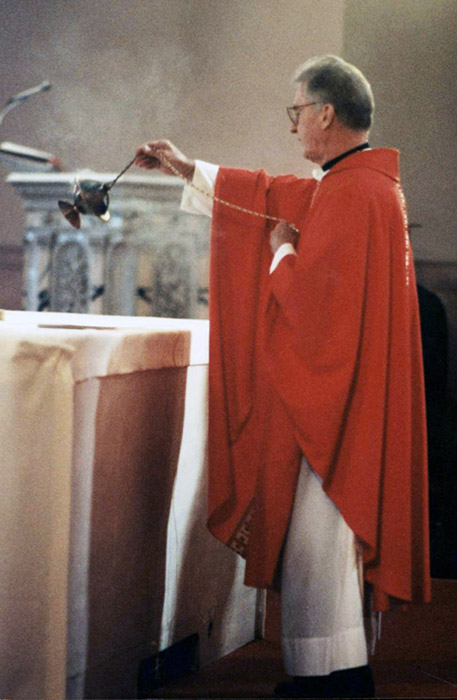 “Coughlin reflects on his 50 years in the Jesuit order,” Signum, Summer 1992 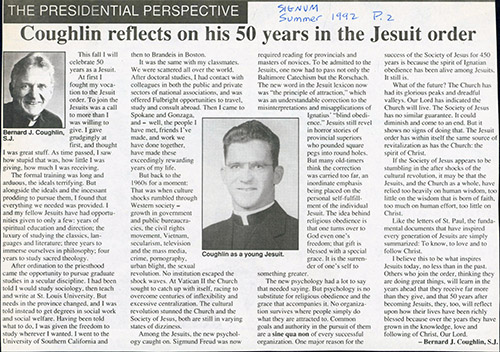 In his Presidential Perspective column in the Signum in 1992, Coughlin reflects on 50 years as a Jesuit: “Others who join the order, thinking they are doing great things, will learn in the years ahead that they receive far more than they give, and that 50 years after becoming Jesuits, they, too, will reflect upon how their lives have been richly blessed because over the years they have grown in the knowledge, love and following of Christ, Our Lord.”

Fr. Coughlin celebrates the Mass of the Holy Spirit with his fellow Jesuits at St. Aloysius Church, October 1993 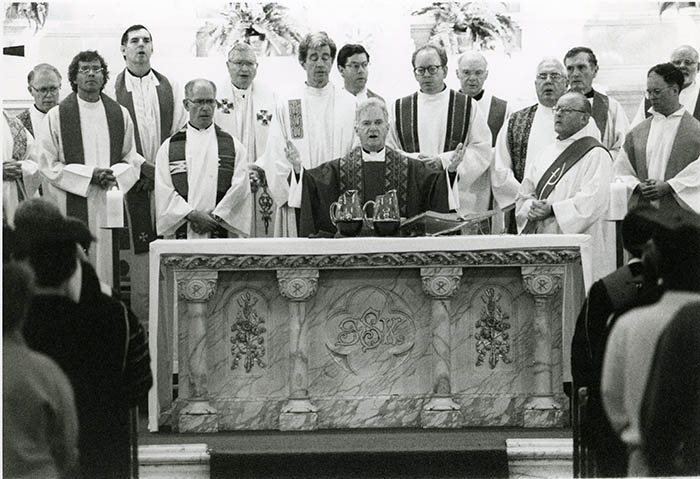 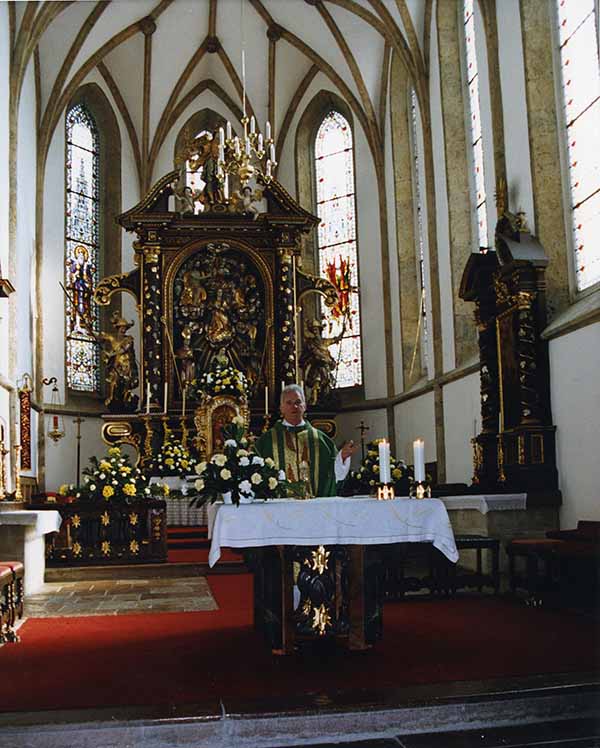 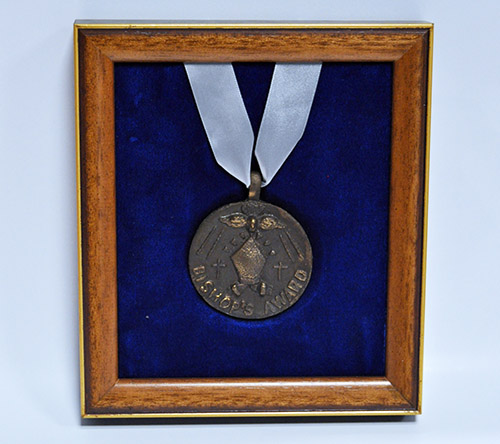 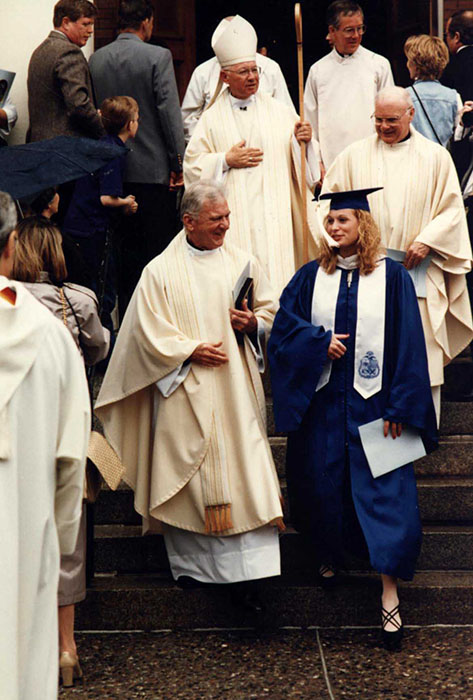 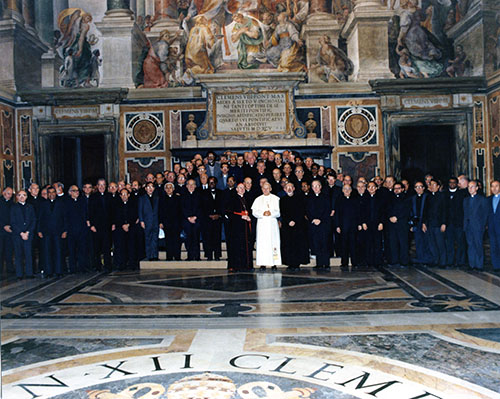 Fr. Coughlin is standing two rows behind the Pope.

Fr. Coughlin typescript sermon outline on the first Sunday after Easter with handwritten notes, no date 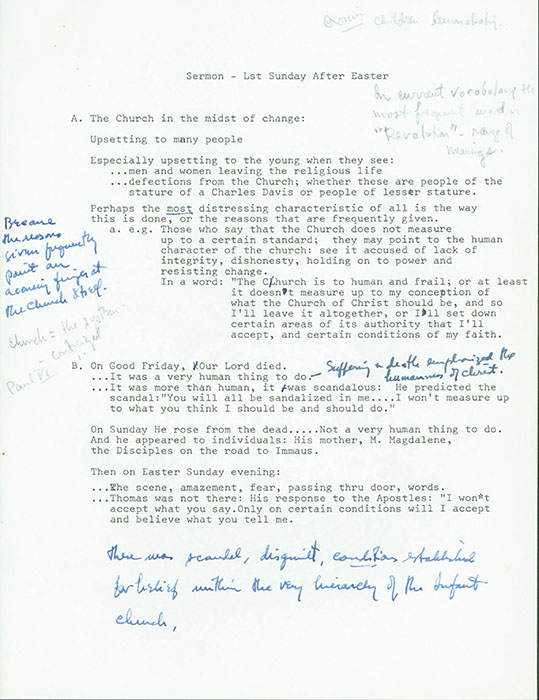