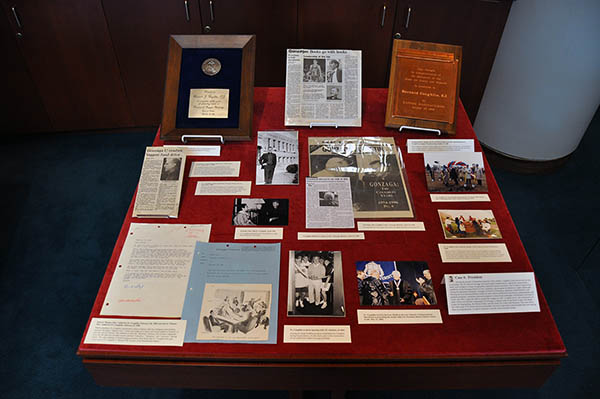 Among the myriad of identities explored in this exhibit, Coughlin is best known for his role as president. His 22 years at Gonzaga were particularly transformative, taking the school from a small local college to a more recognizable, regionally known university. He worked to improve the credibility of the Gonzaga School of Law, instating a day program in addition to night classes and raising the standards of admission. Gonzaga’s Schools of Education, Business Administration, and Nursing all received accreditation within his term, and he established several new undergraduate and graduate programs for the university, including a doctoral program in educational leadership. Enrollment continued to climb, and with it came the need to expand the campus as well. Coughlin saw to the construction of some of the most familiar components of Gonzaga’s campus today, including the Foley Center, the Herak Center for Engineering, the Martin Centre, and the Jundt Art Center and Museum, among several others. This case shows the wide scope of his achievements as president, but more importantly demonstrates that even among these accomplishments, Coughlin remained a humble and personable leader.

Award presented to Fr. Coughlin after five years of outstanding service as President of Gonzaga University from the Board of Trustees, September 29, 1979 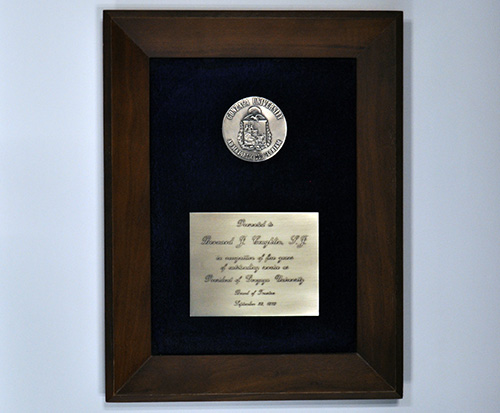 Fr. Coughlin stands outside the Gonzaga School of Law, September 1984 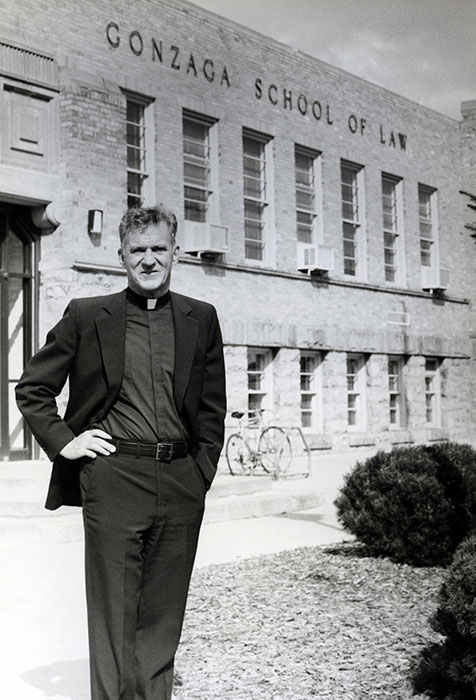 When he assumed the presidency, Fr. Coughlin saw potential in Gonzaga’s law school that had been slowly losing credibility and only offered evening classes. Coughlin worked to improve the reputation law school without losing students by tightening admission standards and introducing daytime classes. 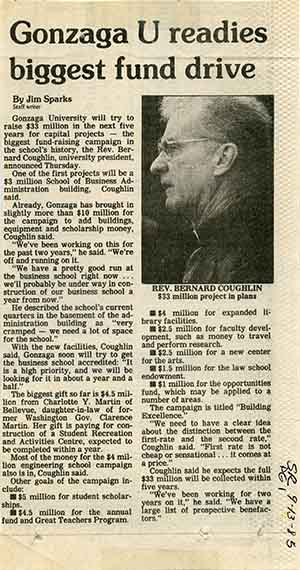 Fr. Coughlin placed a focus on raising money for the endowment fund almost immediately after becoming president in 1974 and continued his efforts consistently throughout his presidency. This article, written at around the halfway point of his tenure, shows the financial goals he wanted for the university. At the time, Gonzaga sought to raise $33 million in the next five year for capital projects, which was the biggest fund-raising campaign at Gonzaga.

Fr. Coughlin with students outside of the Jepson School of Business, 1989 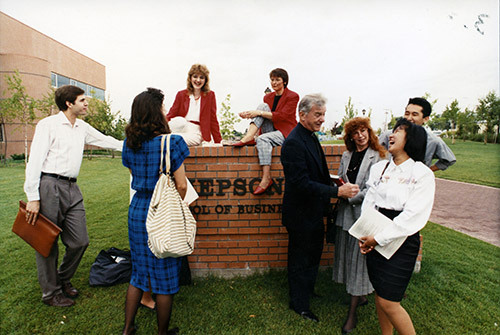 Jepson School of Business, yet another one of Coughlin’s larger building projects, was completed in 1987, and has since provided a facility for the continually growing number of business administration students at Gonzaga. In this photo, Coughlin stands with students, including Gonzaga’s current president, Thayne McCulloh on the far left. 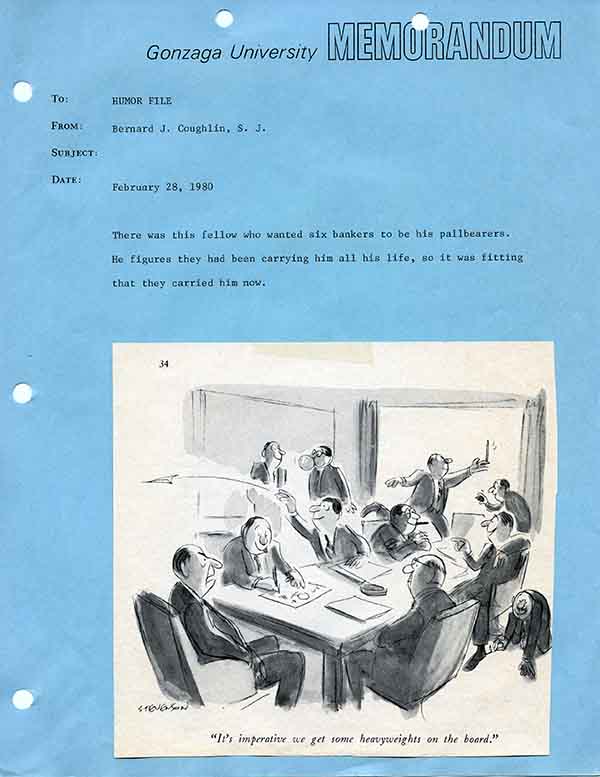 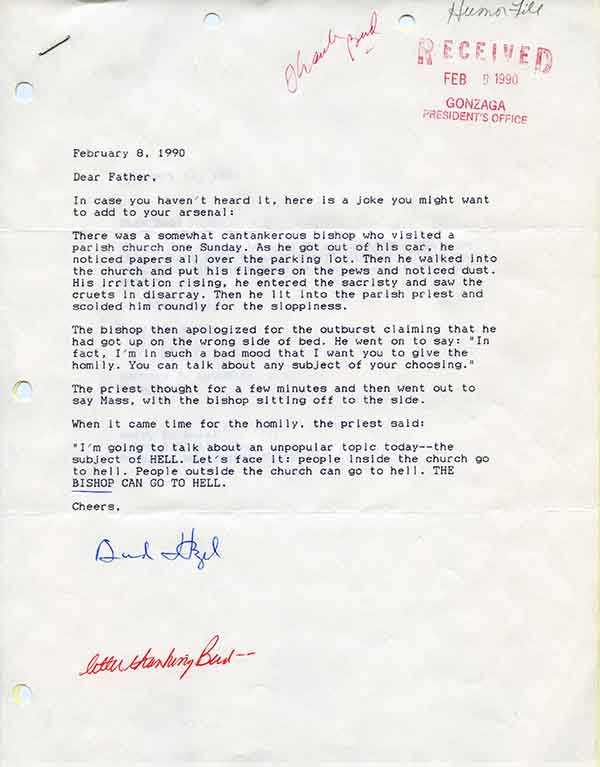 While president, Fr. Coughlin maintained a sense of humor that his colleagues and students enjoyed. He kept a “Humor File,” which was made up of jokes and stories added by himself, or sent into him by friends. This addition is from the “Business” section, one of many categories from the file that also includes entries entitled “Catholics,” “Religion,” and “Lawyers,” among others.

Fr. Coughlin at the groundbreaking for the Center for Information and Technology (now Foley Center), February, 1991 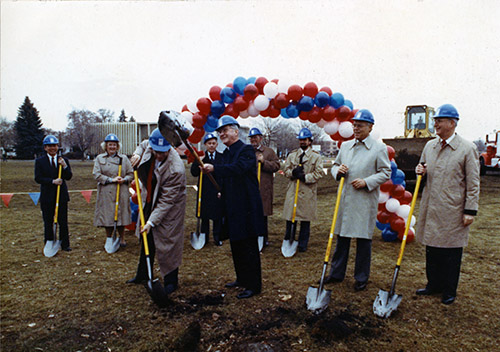 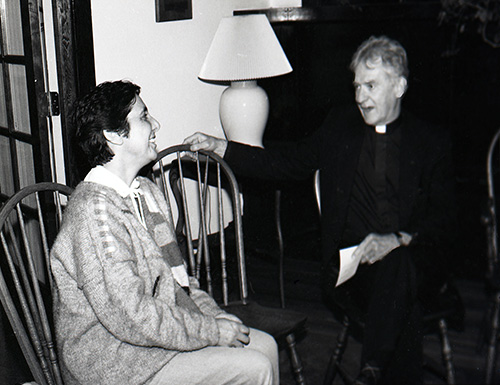 Fr. Coughlin frequently met with students to gain their perspective and input. 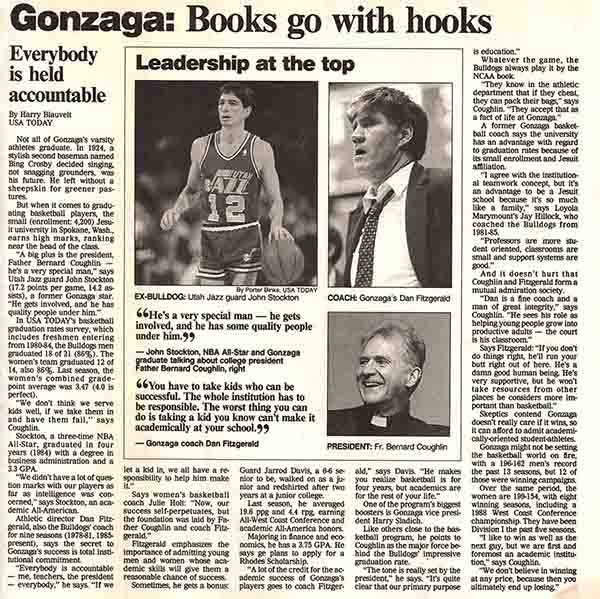 Written before Gonzaga was recognized nationally for its basketball, this national newspaper article describes that Gonzaga in 1991 had one of the highest rates in the country for graduating basketball players.  Utah Jazz star John Stockton, a Gonzaga alumnus, credited Coughlin to this success rate: “A big plus is the president, Farther Bernard Coughlin – he’s a very special man. He gets involved, and he has quality people under him.”​

Commemorative shingle from the roof of the Jundt Art Center and Museum to Fr. Coughlin by Zappone Manufacturing, October 27, 1995 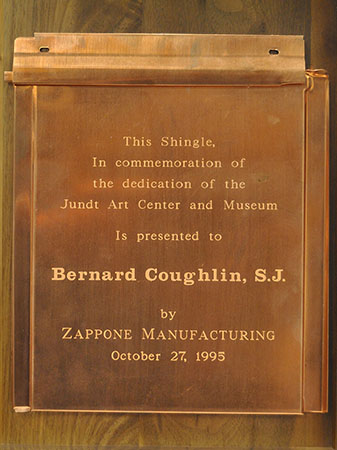 This shingle, an original from the copper roof of Jundt Art Center and Museum, was presented to Fr. Coughlin upon the completion and dedication of the building. Jundt was only one of the many building projects completed by Fr. Coughlin during his time as president. 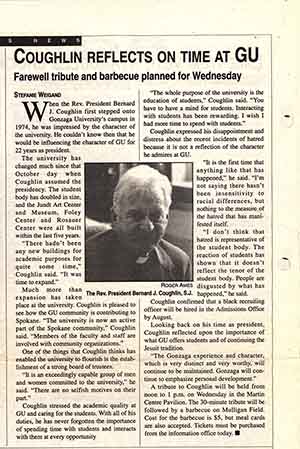 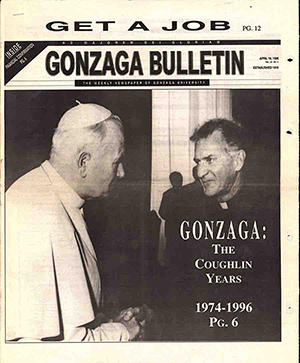 Fr. Coughlin receives the Law Medal at the Law School’s Commencement. Don Herak is presenting the medal while GU President Robert Spitzer stands at left, May 11, 2002. 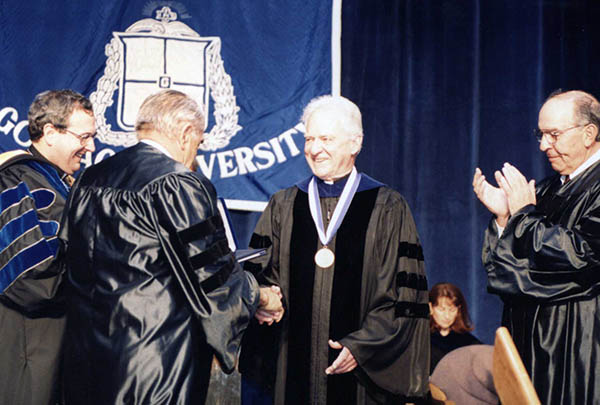 Fr. Coughlin at dorm opening with GU students, no date 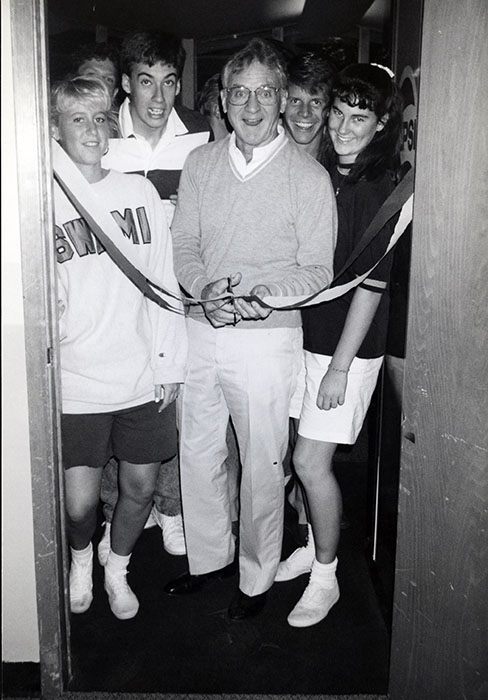 Among the larger building projects undertaken by Coughlin during his presidency, he also had a part in the construction of two additional student housing buildings.