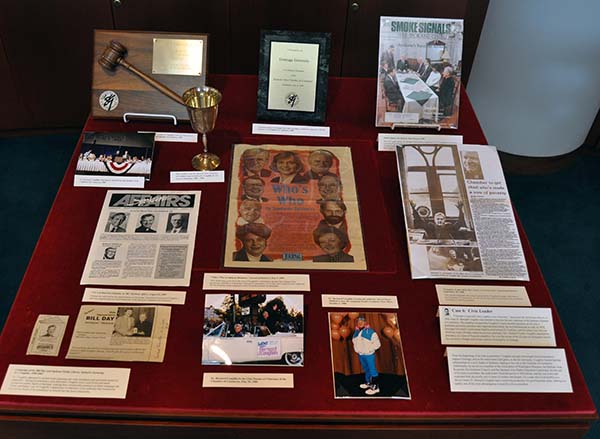 “Chamber to get chief who’s made a vow of poverty,” announced the Spokesman-Review in 1988 when Fr. Bernard Coughlin was selected to become the new chairman of the Spokane Chamber of Commerce. This headline encapsulates Coughlin’s multi-faceted reputation as not only a proficient university president and respected Jesuit priest, but as a businessman as well. In 1974, Gonzaga University’s endowment fund hovered around $1.5 million, and the school was only just finishing to pay off debts under the previous president, Rev. Richard Twohy. Coughlin assumed the presidency at a time of financial instability, but over the course of his 22 years as president he managed to rectify the university’s budget and initiate a period of prosperity at Gonzaga.

From the beginning of his time as president, Coughlin strongly encouraged local businesses to support Gonzaga, and as the endowment fund grew, so did the university. Coughlin formed familiar relationships as a civic leader in Spokane, leading to his role in the Chamber of Commerce. Additionally, he served as a member of the Association of Washington Business, the Spokane Area Economic Development Council, and the Spokane Area Higher Education Consortium. By the end of his term as president, the endowment fund had grown to $50 million, and the university had expanded both physically and in terms of student enrollment. For a man who lived humbly as a devout Jesuit, Fr. Bernard Coughlin had a surprising propensity for good business sense, making this quality one of his most advantageous toward his role as president. 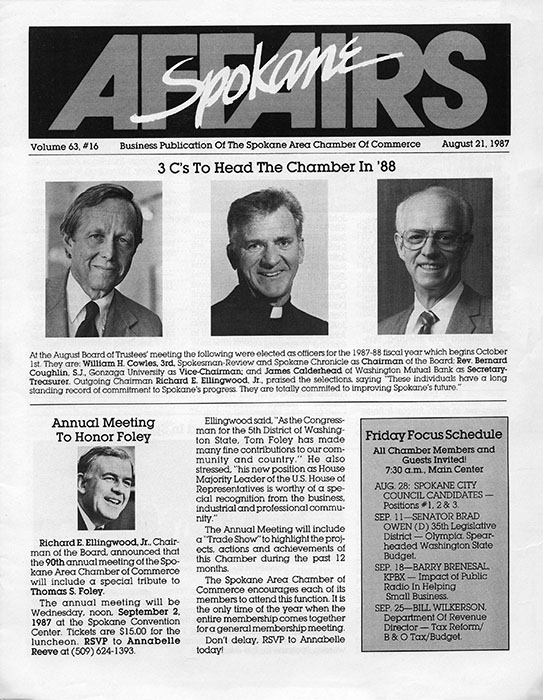 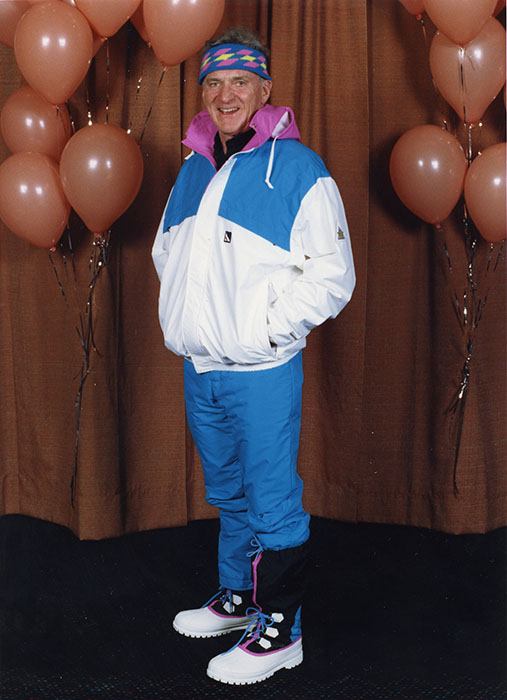 “Chamber to get chief who’s made vow of poverty,” Spokesman-Review, September 30, 1988 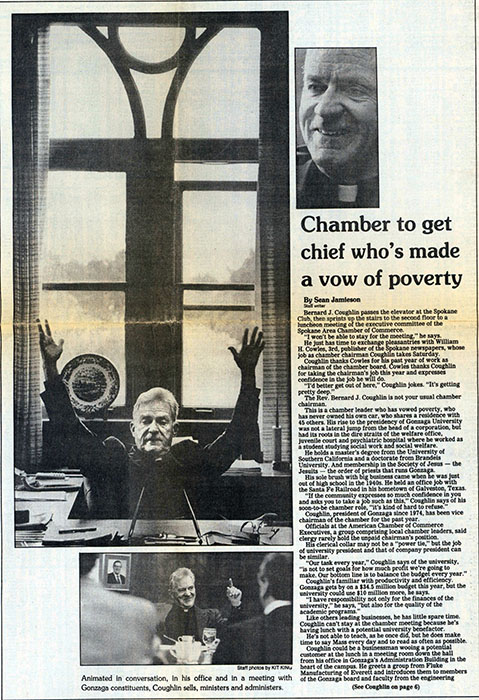 This article highlights the unique perspective Coughlin brought with him to the Chamber of Commerce, as well as the fact that it was unusual for a member of clergy to hold the position.

Fr. Bernard Coughlin in the Lilac Parade as Chairman of the Chamber of Commerce, May 20, 1989 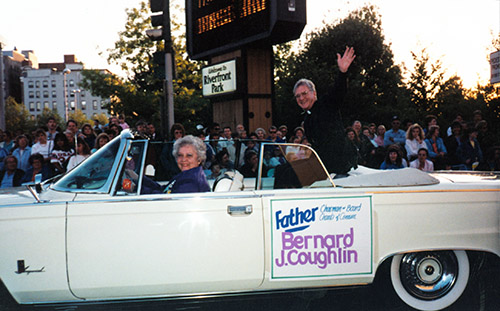 Fr. Bernard Coughlin receiving an award from the Spokane Area Chamber of Commerce, 1989 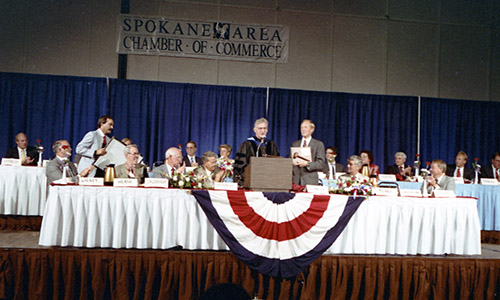 Award commemorating Fr. Coughlin’s year as Chairman of the Chamber of Commerce, 1989 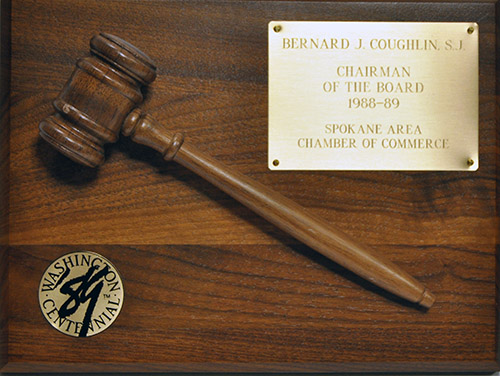 Award presented to Gonzaga University for being a continuous supporter with the Spokane Area Chamber of Commerce, 1989 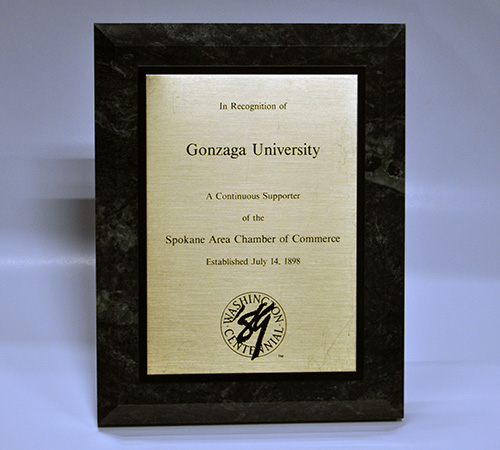 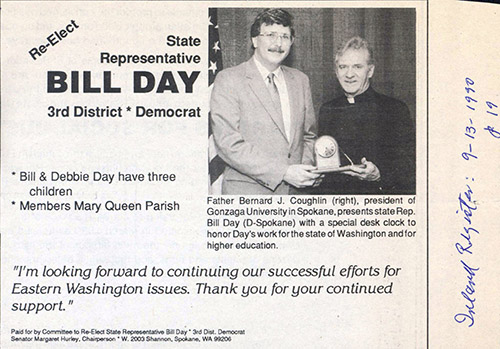 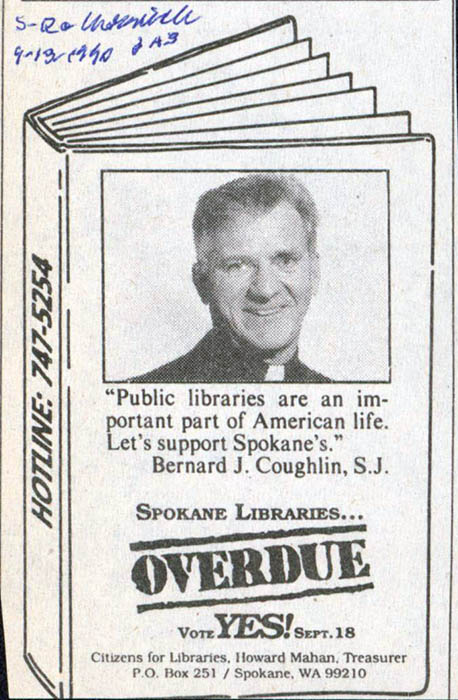 Fr. Coughlin appears in several local campaign ads with candidates Bill Day and Pete von Reichbauer. During his presidency and afterward, Coughlin was a well-loved and easily recognized public figure in the Spokane community, making him a trustworthy presence in these campaign ads. These candidates’ use of Coughlin’s appearance is indicative of an authority that reached far beyond the duties of his presidency to extend into the local community. 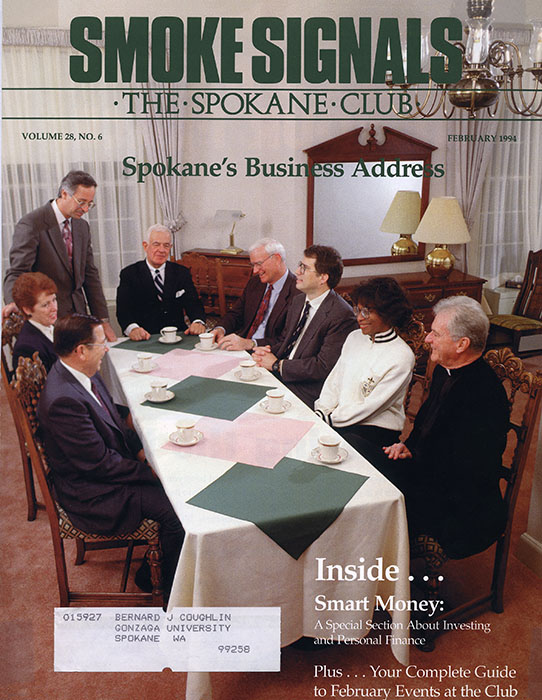 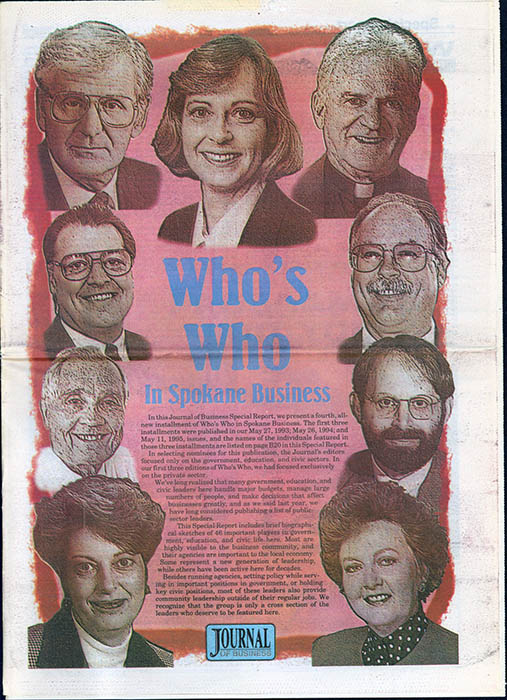 This front-page piece from the end of Coughlin’s presidency groups him among other prominent members of Spokane’s business community. It is clear that Coughlin was respected for his business sense separately from his achievements as president.